Walking on the turtle’s back

Many places in nature are called magical. Some places are even called religious. However, it is often pretty difficult to sense the spirit of the places in question. 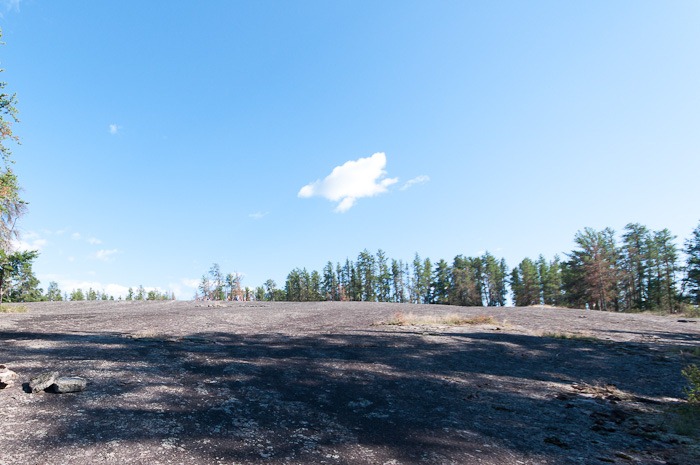 After two years, I decided to return to Bannock point and try to feel some more of the spirituality of the place.

Some people are sensitive to that spirituality, others are not. The boulder formations at Bannock Point are called Petroforms. Here is the definition of petroforms by Manitoba Parks: “Petroforms are defined as features formed by the careful placement of stones to create the outlines of figures and shapes. The stones are small boulders arranged on bedrock outcrops in the shapes of snakes, turtles, humans and other forms.”

So there you are, carefully placed stones on a bedrock surface. As I have stated before, the turtle is an important figure in the Anishinaabe culture. Bannock Point at first sight only looks like a flat plain of hard rock. Going a little further, you will notice that this flat surface is not so flat at all. From a small distance is even looks like a turtle’s shell. 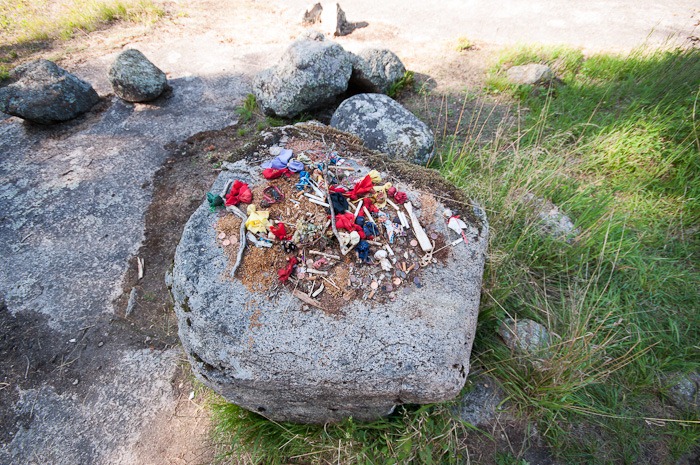 Offerings at the entrance of the central worshipping place

While many of the petroforms are considered disturbed by people, some of them seem to still be in a good shape. Bannock Point is still actively used for ceremonies, even today. 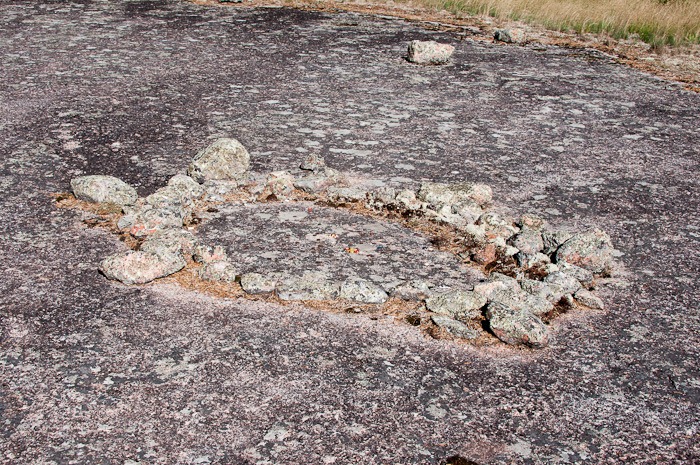 A turtle without a shell

Turtle form without a shell. This form is actively used, if you look at the “offerings” inside. 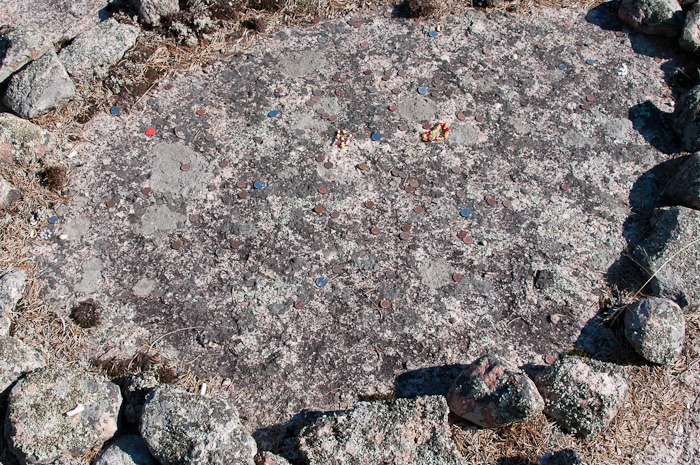 Other forms seem to have been disturbed or completely destroyed. Apparently it bothers nobody that this is against the law… To me that looks the same as putting graffiti on a church, synagogue or mosque. It’s something you just don’t do. Oh well… 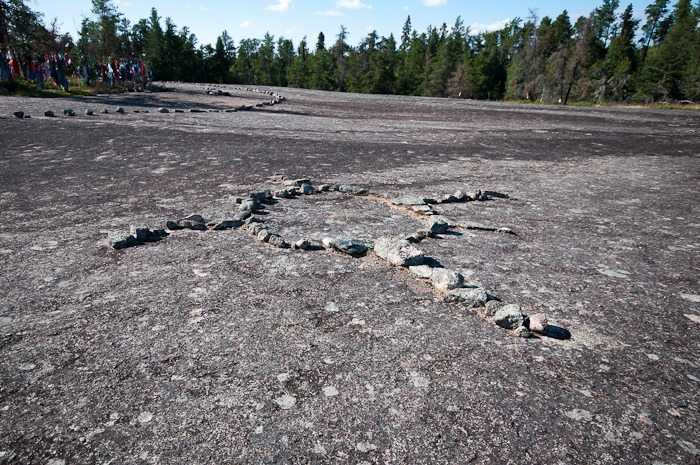 The turtle figure is very much present at Bannock Point. However, other forms are also present. Bannock Point is the most diverse Petroform site in North America. Other sites often have only one or two different shapes. 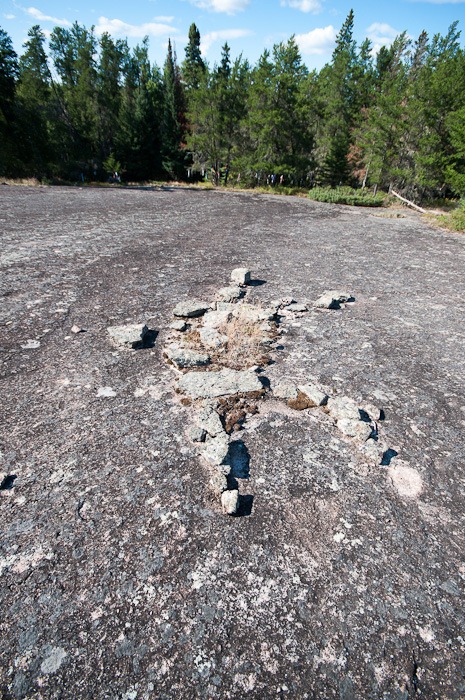 Therefore it is thought that all started at Bannock Point and other sites just diffused outwards. 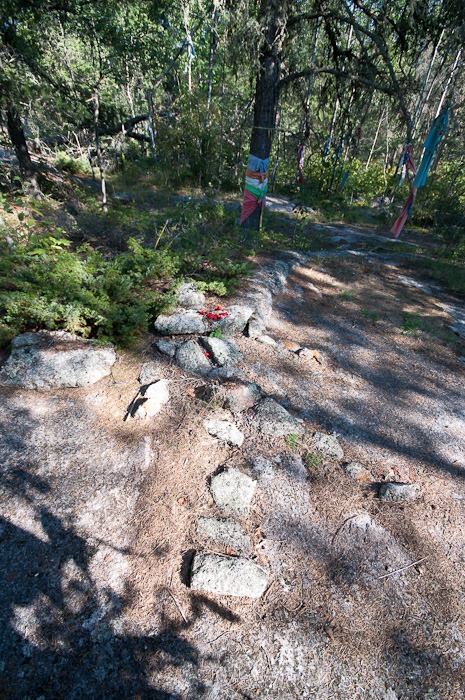 An active figure of a woman

When I came here for the first time, two years ago there were other forms on the site than today. That leads me to think that some have been rearranged or have been newly created. Others, though seem to have the same form and have the same spiritual interest as two years ago. 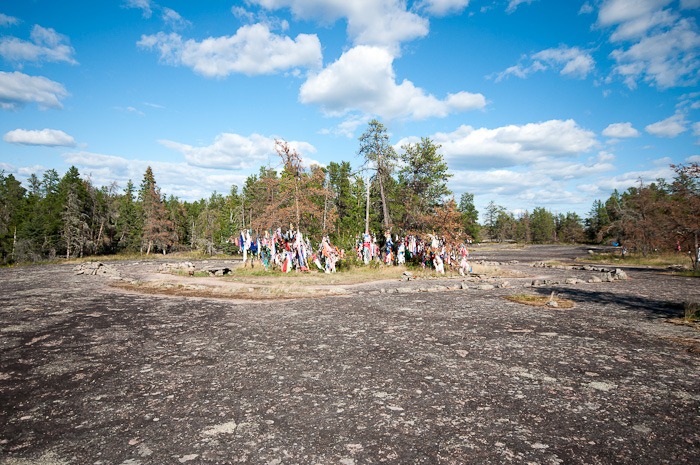 The cloth on the trees has a special meaning for those who have been there. However, I have no clue. They can be offerings, or something like “lighting a candle” type of attention. 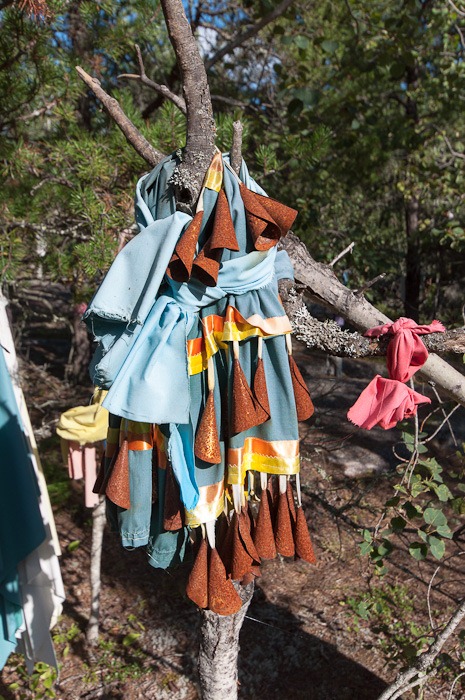 At one point I found this very ornate type of cloth, obviously left there for a very important reason. The metal bells surely were not rusted at the time this was left for the spirits…

There is lots to say about this place, about the forms or even about the spirits that inhabit the place. None of what I can say would be of any real value, I don’t know enough for this. After all, I only arrived here a few years ago.

But one thing is sure. If you go here, you will most definitely find that there is “something” there, be it spirits, a feeling or the impression that someone is watching you. That might well be true, after all, you are walking on what appears to be a turtle’s back…