Last time I went south, straight into the rain, or at least with the rain. So the next day I decided to go north to try my luck at the Icelandic Festival in Gimli, MB. 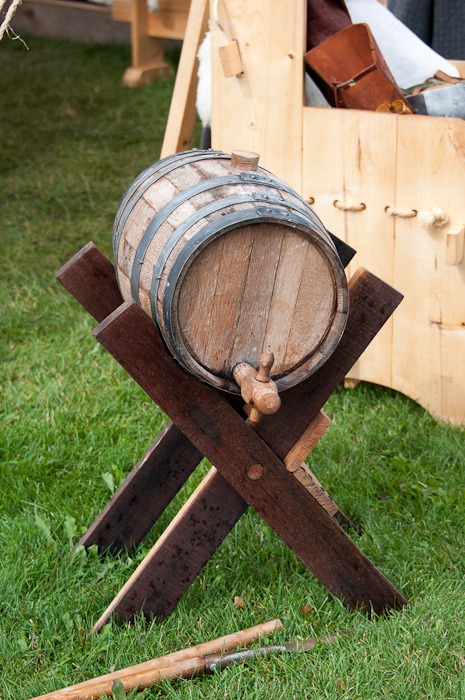 During the trip all was sunny and warm. Arriving in Gimli, the rain started gushing down… What a surprise. However not enough to get me back to Winnipeg without checking out the Festival…

The beer keg in the lead picture was what attracted my eye in the first place. Unfortunately the keg was empty and only for displaying purposes

. So I decided to go and look around in search of other interesting things.

As it turned out, the Icelandic Festival is pretty extensive, with concerts on one end of the town and a village depicting the Icelandic Ways long gone at the other end. This was a good opportunity for me to get some nice details. The rain had shooed many people away into shops and under big awnings. Vikings don’t fear rain, neither do I. I got many good chances to get great pictures of details and situations of daily life of a thousand years ago. 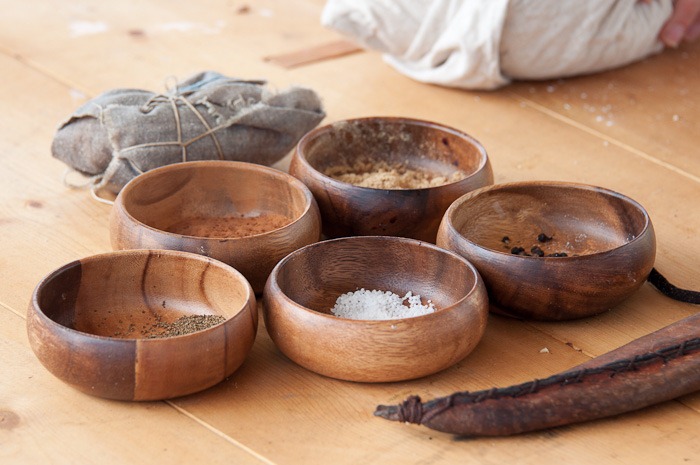 However, some of those details don’t seem in place to me. I'm not sure that the Vikings used tropical woods for their bowls and kitchenware… I believe it was more pine wood and oak everywhere. 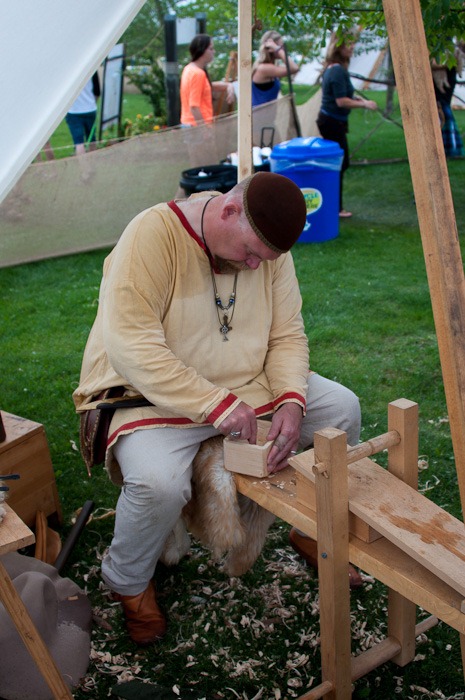 I’m a sucker for ancient activities and here it was no different. Wood carving, fighting and story telling. Most of the activities could be had without any “extras” from a more recent epoch in the frame 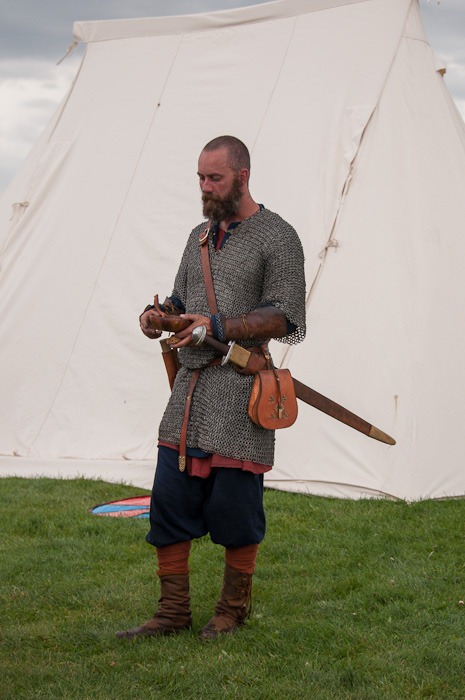 Don’t believe that all Vikings were blond with blue eyes only. They had enough contact with other people in Europe to manage a few variants. The red-headed Vikings were a mix of the peoples of Northern France and themselves. Then there were of course the constant interactions between the Norse and the Celtic people in Britain. 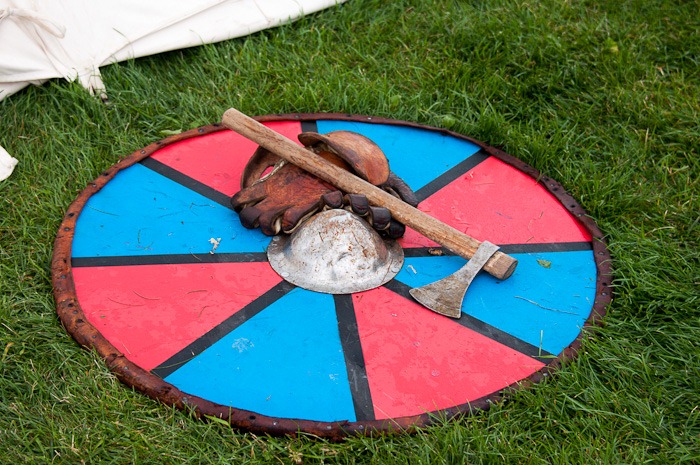 Many of the artefacts used and shown here are of course not originals. It would be a sacrilege to leave a thousand year old shield lying around in the rain. The above one is a child’s playing shield. 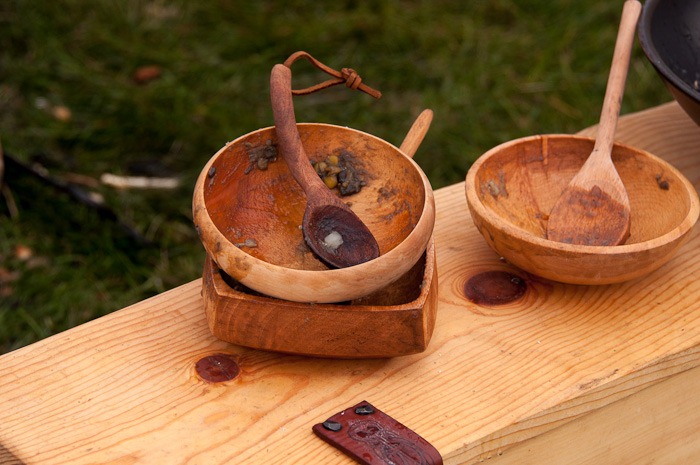 Food was served and consumed in place. From what I heard, these bowls contained some venison stew, common for the Vikings of Northern Europe. Pity there was nothing left for me to try… 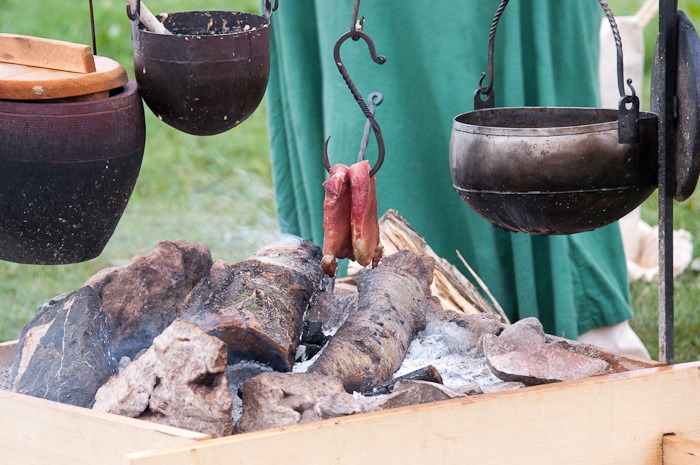 I could only look and smell the food. None was served to the poor visitors. Probably also because for the “poor visitors” they would have to butcher droves of deer to fill the stomachs. That’s not something you can do in modern Canada, not even for a Festival. 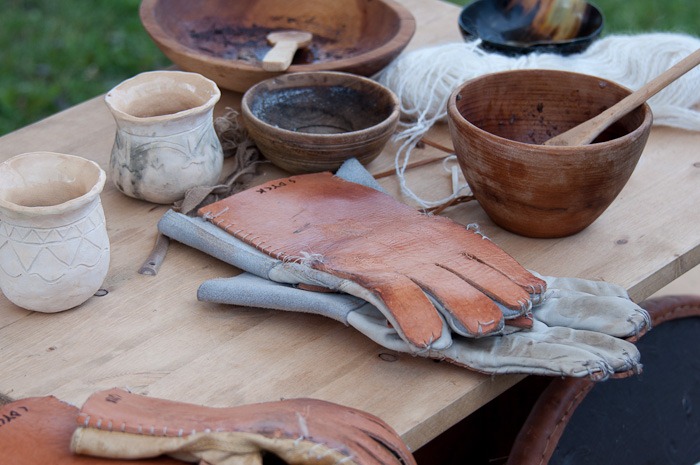 Those gloves were kind of interesting. The top being leather, and the insides leather of a different kind. It allowed for pretty heavy blows on the top of the hands without damage and have the insides supple enough to hold any kind of weapon or kitchen tool. 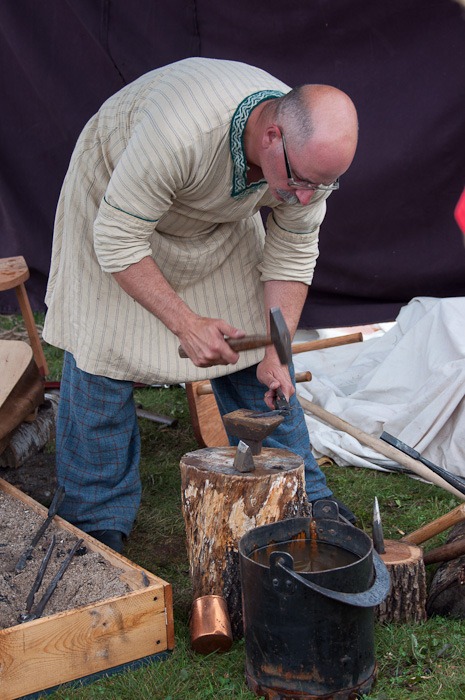 Only the blacksmith was not completely in style, I guess that he couldn’t see anything valid without his glasses… Same goes for me. He portrayed a blacksmith of a different type than I was used to until now. Probably because he is more than 600 years older than the ones I know. 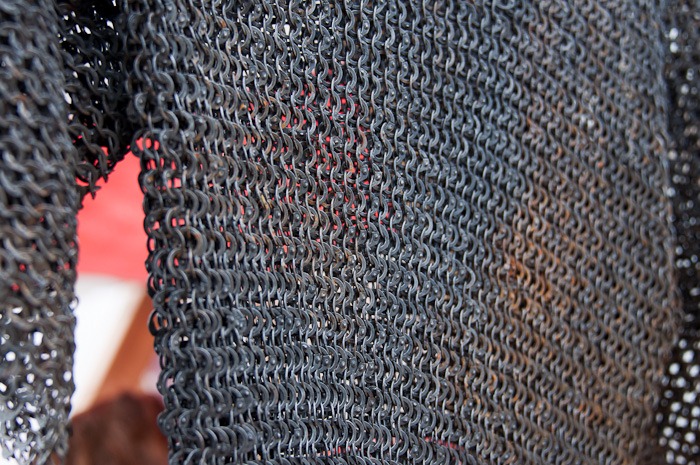 Protective gear for the fighting men was also present. Here is a detail of such a garment. It was pretty heavy to wear, but apparently  very efficient in softening any sharp blow from sword axe or other killing tool. It was later used by all knights in Europe… 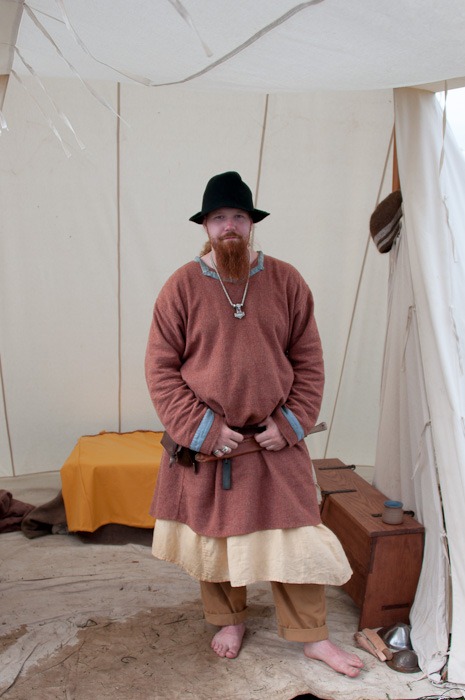 This gentleman looked like a storyteller to me but in fact was selling jewellery. In any case he didn’t look fierce or frightening. The idea was that if you could frighten your enemy, you already had half the battle for you. 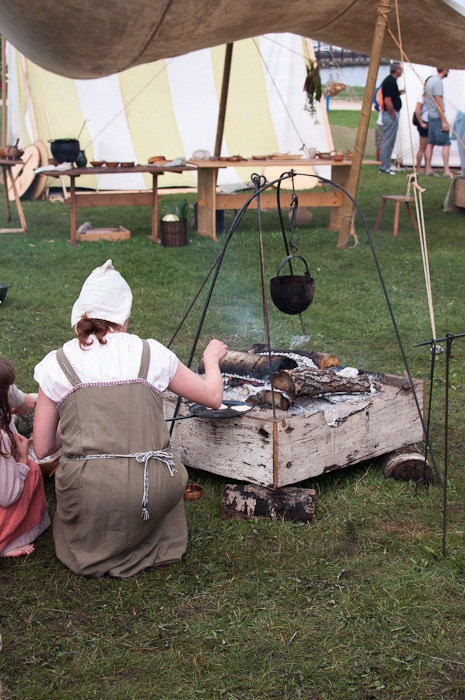 That’s the way to not burn yourself

The kitchen part of the daily life was also very present. Women tending fires for cooking were everywhere. Talk about getting hungry. Above is a woman teaching a little girl how to lay wood on the fire without burning herself. 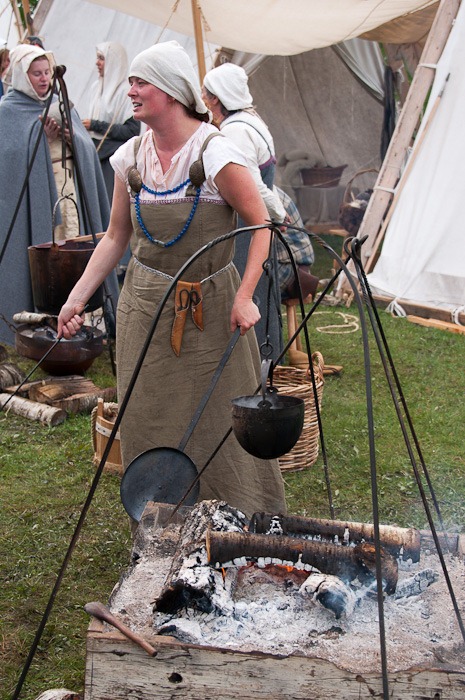 Hey, you! Get that keg of beer here! On the double!

But even the women looked pretty fierce. Above, a woman calling for her husband to get a keg of beer. Apparently under the threat of the pan… 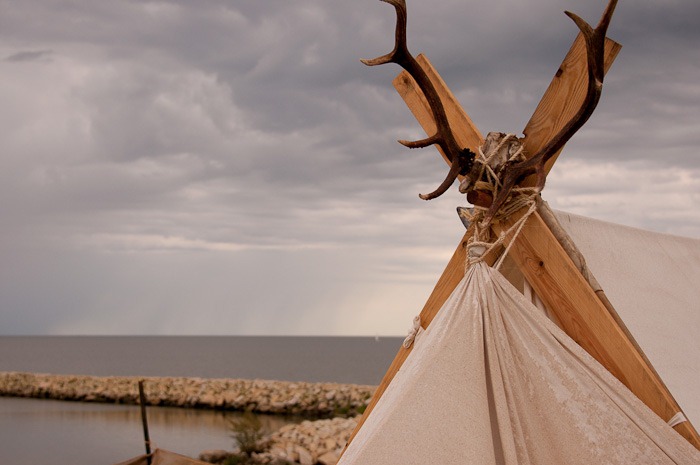 Oh, did I forget to say that halfway through the encampment the sun started shining and the rain was on its way south?

Not saying that that was the best part of the day, but it did help for the morale.