Photography is all about history, right? All you can do as a photographer is capture a moment in time. After that, it’s already history. So, what if you could go back in time and catch some older history? 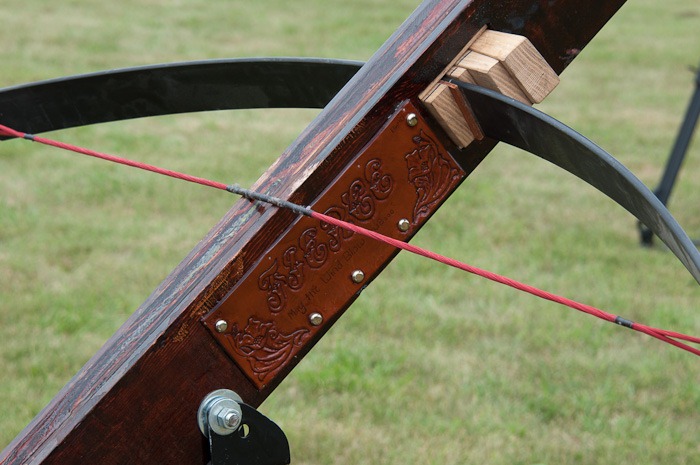 That was my goal in going to the Medieval Festival in Cooks Creek, on July, 28 at the Church of the Immaculate Conception.

The Church of the Immaculate Conception is already an old acquaintance on this blog. I talked about it here and here.

The medieval Festival is held every two years in Cooks Creek. So I went there with all kinds of ideas in my mind. Knowing that Canada has not had any medieval period we know of, I was curious to see what had come over the Atlantic for this Festival. 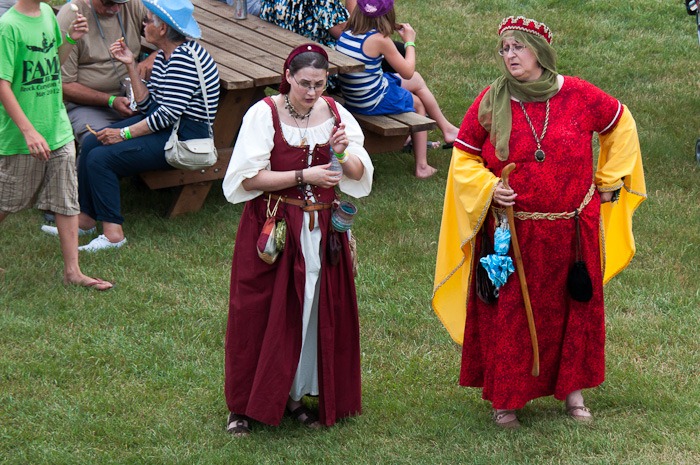 Finishing up some business

There were no professional actors among the public, the people I saw in medieval clothes, had made them themselves and wore them with pride. Sometimes though, I had to NOT shoot them, since the medieval person also carried plastic bottles or a Nikon camera. Talk about an anachronism… 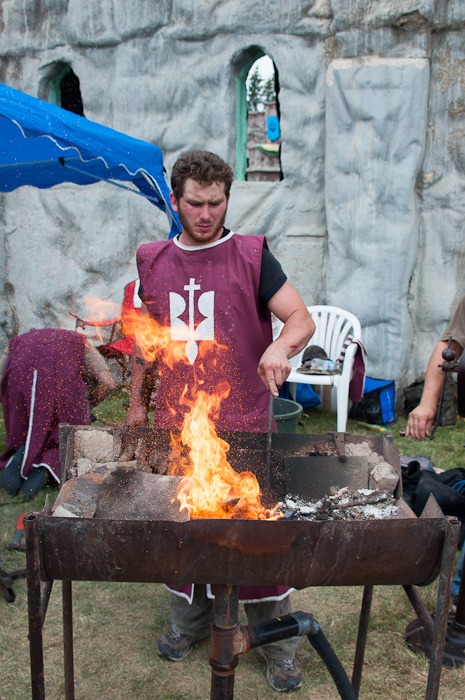 The pros that were there doing their “job” were definitely serious about it. Here a Ukrainian blacksmith at work. In keeping the modern air blower out of the picture I did gain a plastic chair. Oh, well… 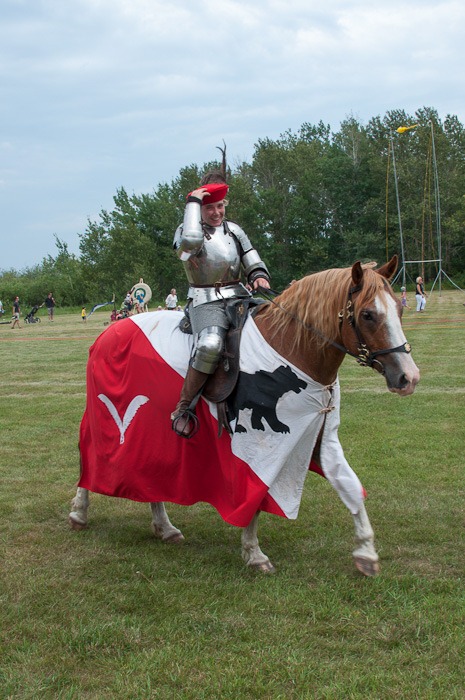 And then there was the jousting. Unfortunately I arrived a little late, so I missed the games. There was no blood on the ground so the games must have gone very well for all contenders. 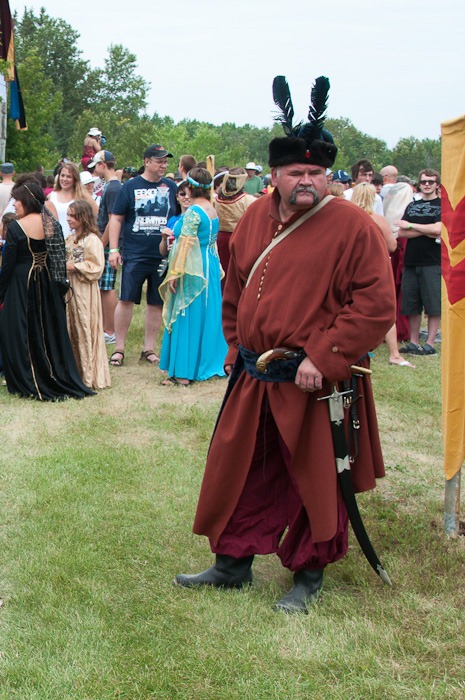 Costumed guests took their roles very seriously. No laugh on this man’s face

. A little while after this picture I caught him talking with the local sheriff about something and he looked really imperious. The rich man of the town giving orders, I guess. 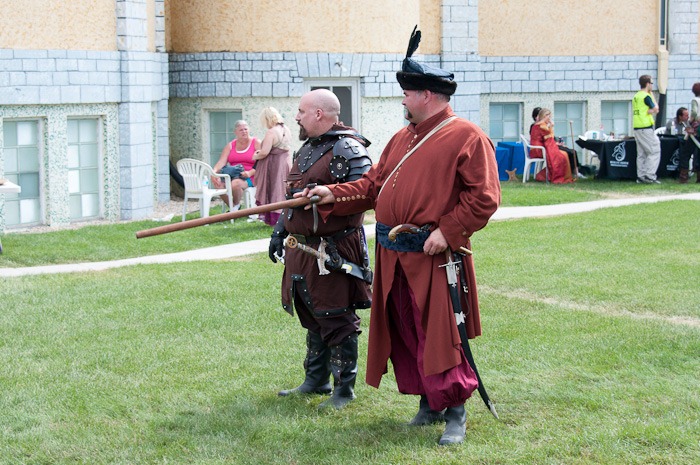 Or perhaps just pointing out some artefact he would want to have in his home, and the sheriff would have to make sure it got there. Who knows? 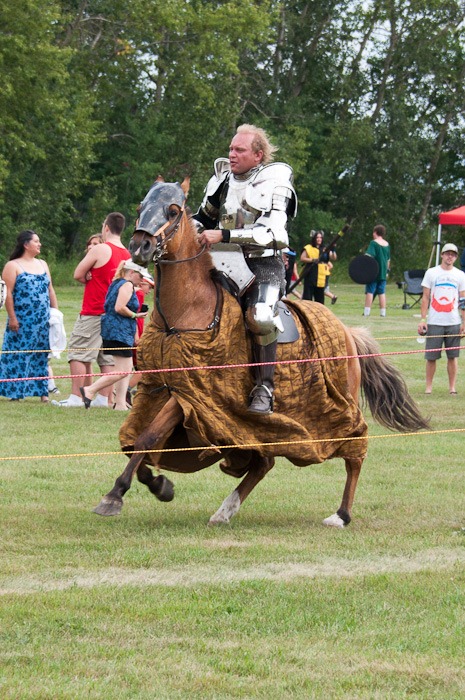 Some of the knights were still there to give us, photographers, an extra chance to shoot some unique scenes. It’s not often you can catch a fully armoured knight on a running horse. 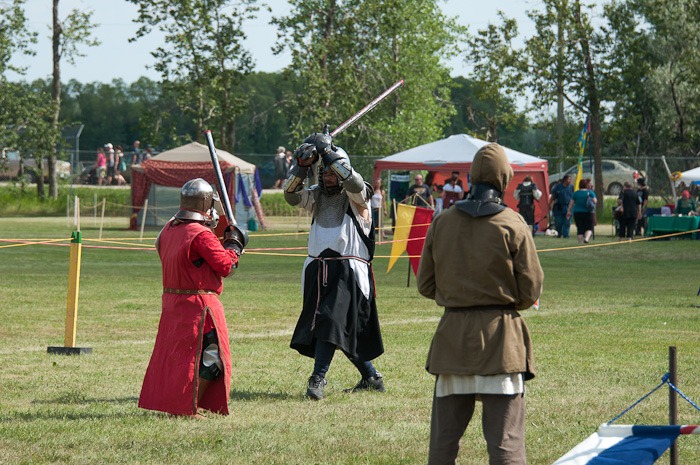 Then there were the sword fights, where points were counted as if it were the Olympic Games. I don’t remember who won this contest, but both fighters were equally skilled. But that skill should remain on the battlefield of medieval times. I can’t imagine someone today hacking away like this on someone else in the streets of Winnipeg 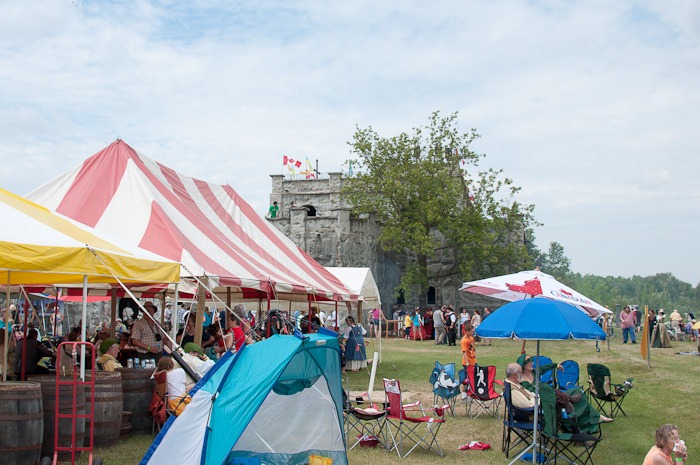 The Ale Master’s with the castle in the background

The day was hot. Although at first there was no sunshine, the temperature was around +30C. That was a good reason for me to go and see the Ale Master.

By now, you could see the clouds slightly parting. 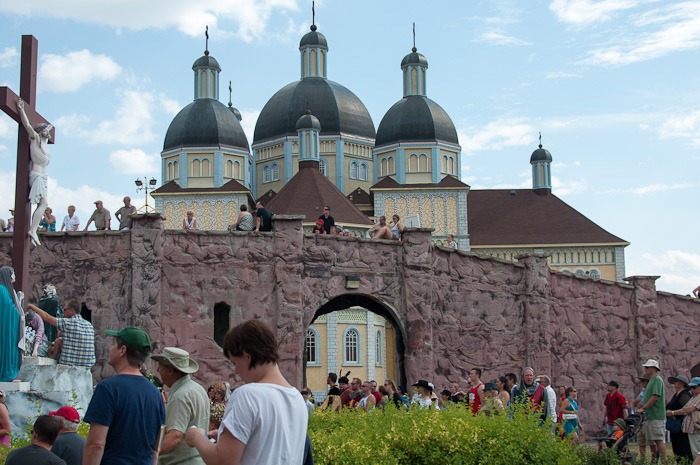 Then, after the games, it was time for dancing. The central court of the Grotto was transformed into a huge dancing scene. Not for the commoners like me, though 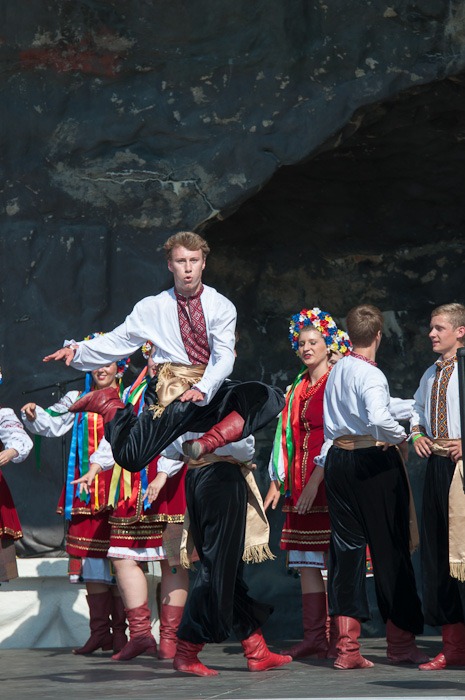 The dancing group was called “Selo”, which in Ukrainian simply means “village”. So when I asked some people where these dancers came from, the answer was Ukraine. A village called Ukraine. Hmmm, have to look it up one of these days. 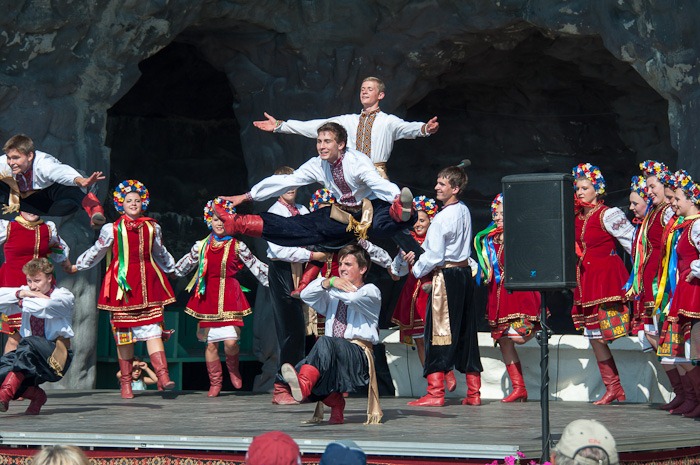 These dancers were really acrobatic and real professionals. At least in my eyes. By now, the sun had completely scared the clouds away and was heating up the scene. And still they were smiling, with all that hard work and that scorching sun! Now that is professionalism for me! 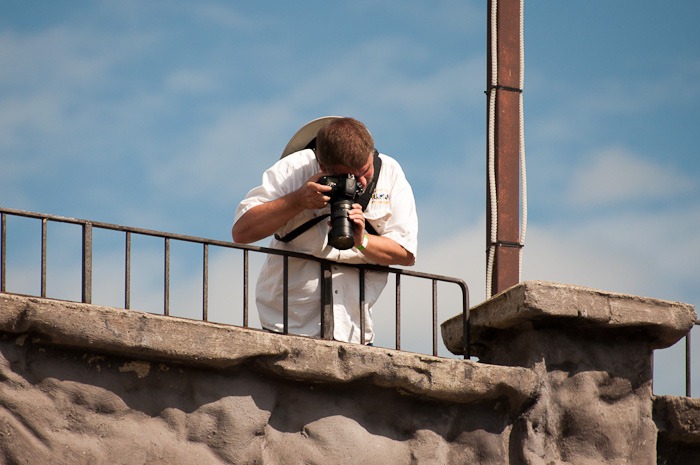 Talking about professionalism… This photographer had a strange position to take pictures of those dancers. I’m wondering what kind of pictures he got…

By the time the excellent dancers of Selo had finished, I was also nearly boiling in the sun. I decided to leave the Middle Ages and return to my own time. In a car without a/c… But that is a different story.

The event was a FUNdraiser, and fun it definitely was…