A day off in Calgary …

Well, more or less. Last week I had to go to Calgary for some business. Nothing special but it had to be done in person. So, I took the day off and left for Alberta around 7am. 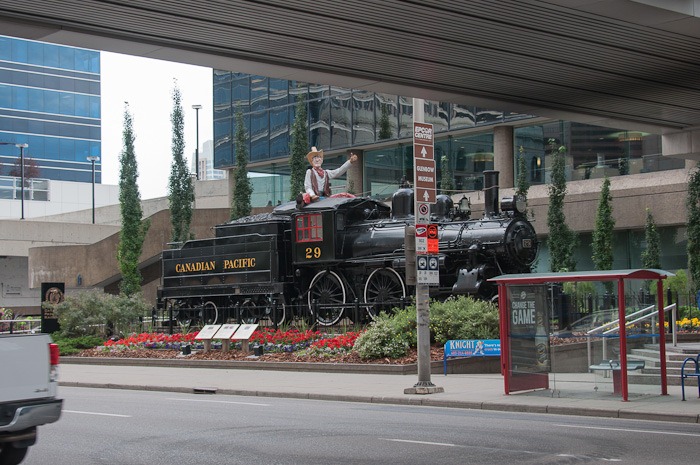 Arrived in Calgary, a leaden sky and rain started to come down. Wonderful, only my short-sleeved shirt on my back and nothing else. Thanks, Weather Forecasters! So …

I planned on finding some kind of museum and hide. But first I had my business to take care of. Once that was done, quicker and sooner than planned, I came out in the streets again, only to find that the clouds were making place for some sunshine. 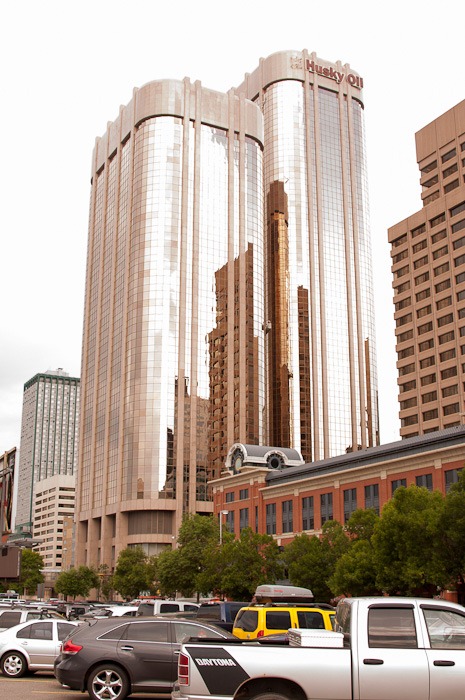 Also, the city centre is looking a little like Manhattan if you are near-sighted like I am and it looks a little like Paris, La Defense in France. After a while the sun was on the winning hand, clouds blew away and the temperature was nicely getting into the higher 20’s. 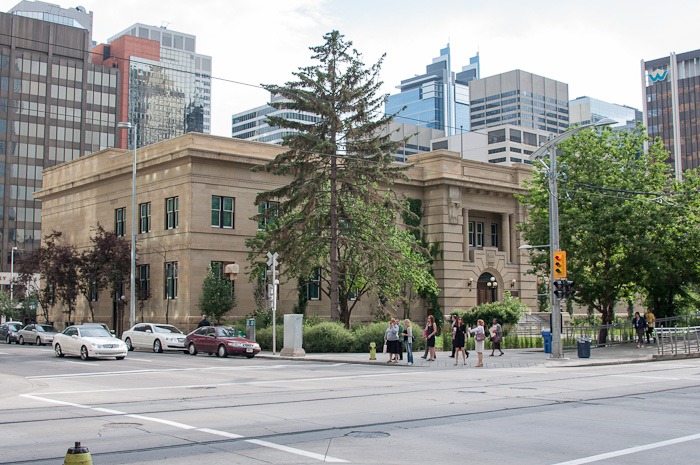 At one point I even had the impression there were palm trees growing, but at closer look that was an illusion. The whole business centre of the city is made of concrete and glass, very little space for parks and greenery. 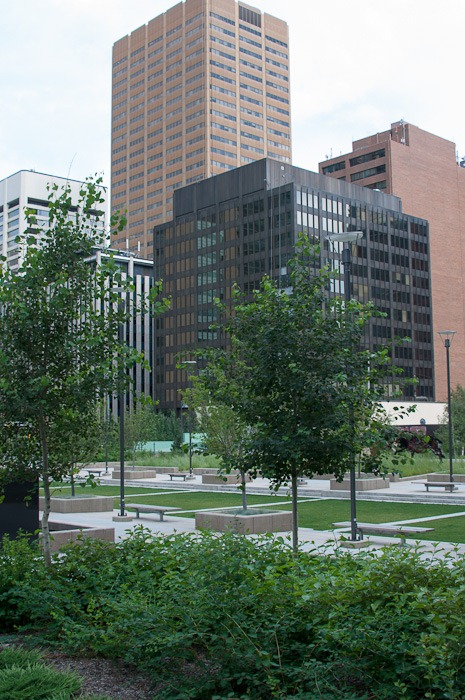 This was a little park I found, but even there, the concrete was very present. This was the greenest place I could find in that early morning. 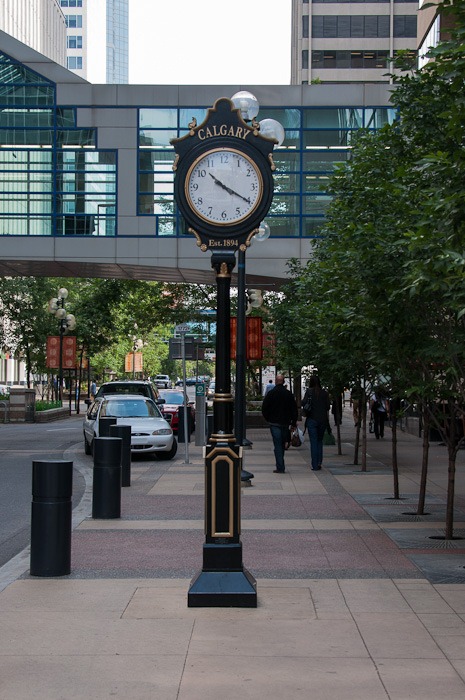 The city centre was more decorated with old artefacts like this clock than with trees and greenery.

Then I got a phone call from my wife telling me about the Calgary Tower. I had seen that tower already on different photo sites, but didn’t think it was close. 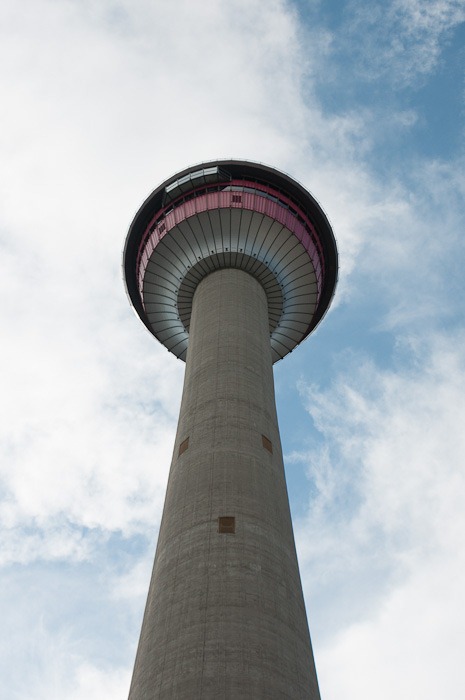 What a surprise to see that the tower was only a few blocks away! So, with a tower of this type close by, there was no reason to resist the urge of going up and see what the whole city looked like. At any rate I didn’t have enough time in one day to visit all of Calgary, a birds eye view would have to do. 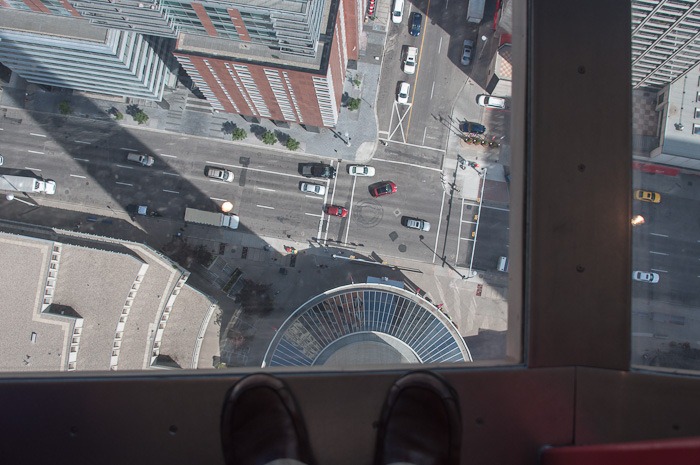 And a birds eye view I got… Those shoes are mine. The depth is real, although the thick glass floor is not as visible. Usually I fear no heights, but still I kept to the metal struts for stepping. 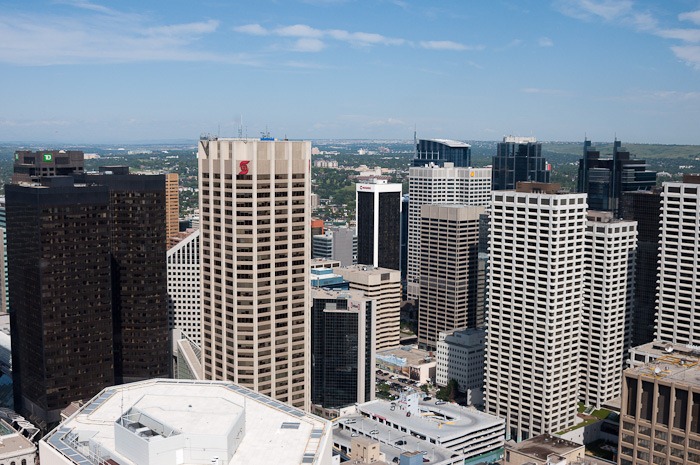 The business centre is absolutely beautiful to see from up there. Somewhere though, it’s a pity that even higher buildings stand close by. You get kind of jealous… 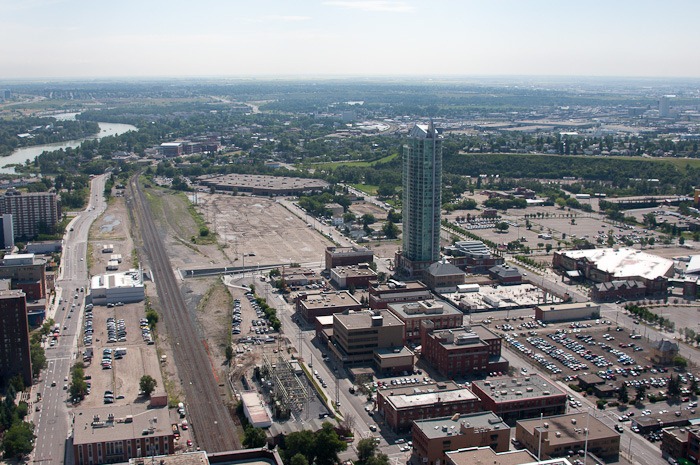 Other parts of the city are still, well let’s say, to be developed. These old train yards clearly don’t see as much use as before and the terrain seems to be waiting for a developer. 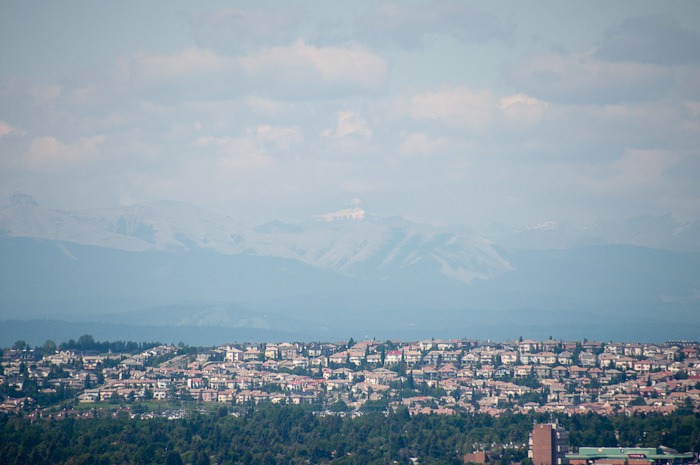 On the other side of the tower, the view was also quite unexpected. Although mostly city, the far horizon is not as flat as I thought. The peaks with snow are clearly visible. That made me check Calgary’s altitude and it sits on 1000m… Clearly closer to the mountain tops than Winnipeg. 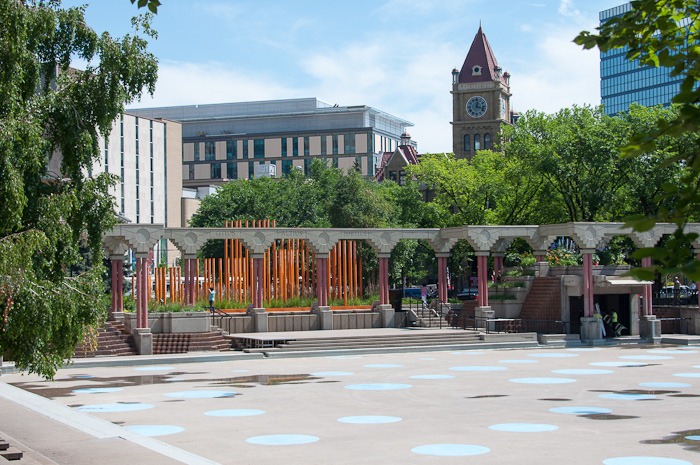 After that it was time to go down again, one can only stay so long up there. After 5 rounds on the viewing deck I think I had seen enough for the day. My cellphone pointed me to a big attraction called the Olympic Park. A place full of fountains and waterfalls. Not lucky, it seemed like the main pump of the park was broken for the day. 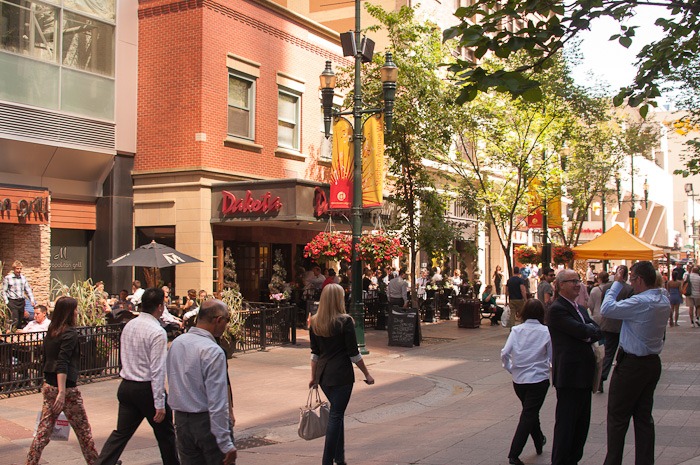 Time for lunch. Calgary’s central street, also the oldest, is 9th Avenue or Stephen Avenue. Filled with cafes, restaurants, banks and merchants trying to sell you everything and its grandmother. I decided to get some lunch. The light and its colour were as you can see in the above picture. A little copper coloured. It’s the reflection of the Husky oil building and a few others in the same style nearby. 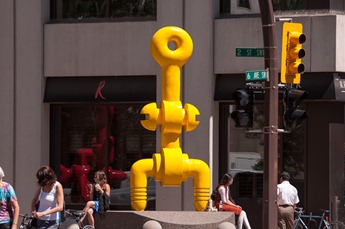 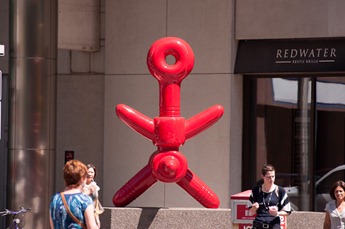 After lunch I found some surprising sculptures… I think comments are superfluous, here. 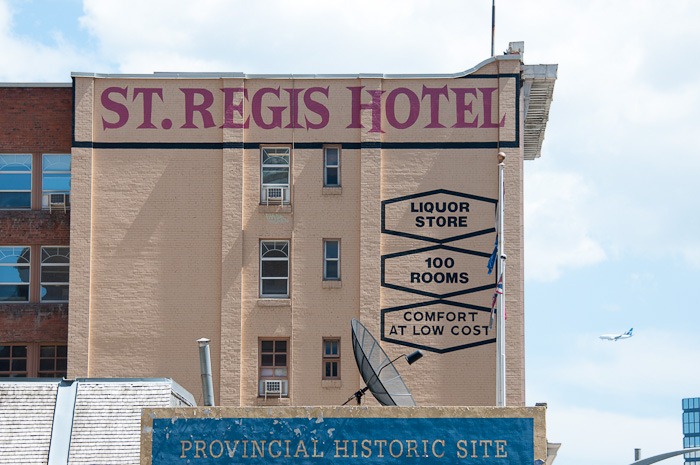 After a longer walk, only a few streets away, I came across some older buildings, clearly from a different age than the massive business buildings. The usual mural paintings of a bygone era. Well maintained, though. 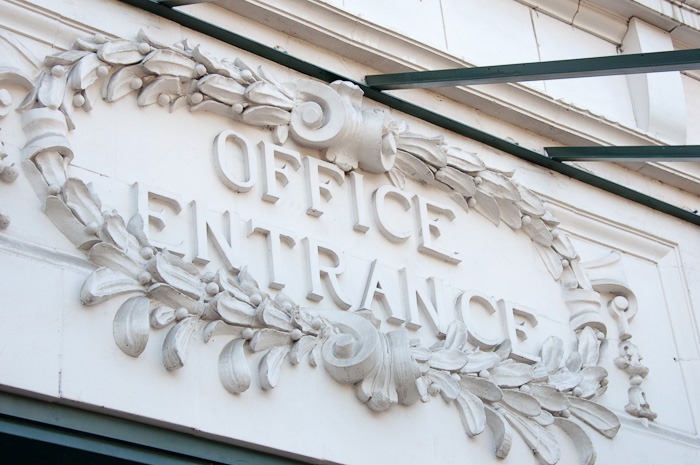 As a last picture I found this entrance sculpture. After I had wandered among the newest business buildings of the city, I can say that they definitely don’t make ‘em like this anymore.

Then it was time to get back to the airport and back to Winnipeg. A good day, nice and warm, unlike the first promise of rain.

Calgary, I’ll be back, albeit only as a tourist, Winnipeg has more to offer for me