We all know those nights. Full of stars, no moon and dark… So dark that even reading your watch is becoming a problem. 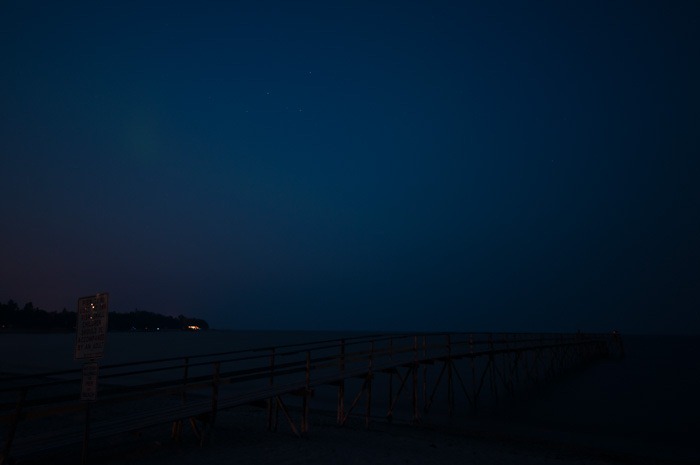 Away from civilisation, well, at least a few hundred meters. Not another soul in view. Even your own soul is hard to see. Nights like that can present some surprises…

If you cannot see what is in the sky, apart from those stars, then you should take a camera and let it have a look instead. Its 77mm-ish “pupil” is likely to gather more light than your own eyes. 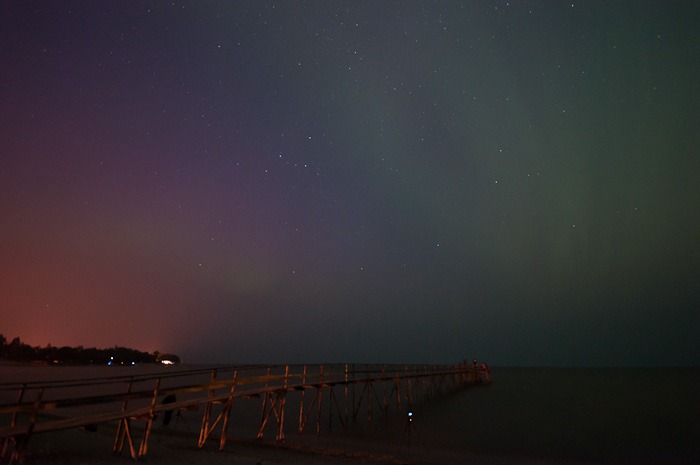 The first surprise will be that the darkness is not so dark, and that you are not as far away from civilization after all. The glow of a distant village with a few sodium lights suddenly becomes visible. 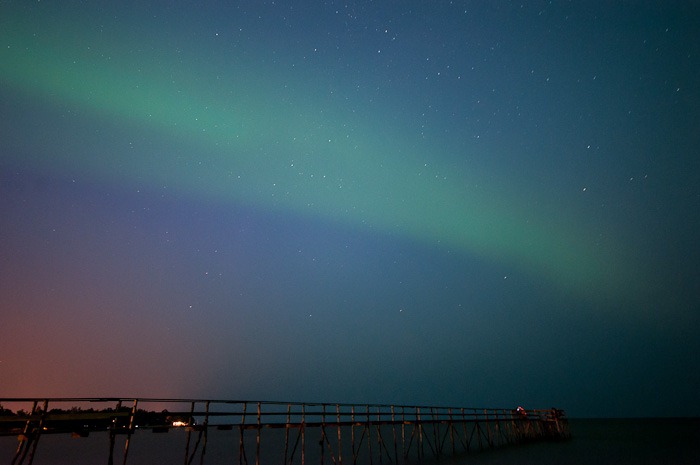 Then suddenly, a green mist seems to come down from the sky. Have no fear, that mist is still around 80 kilometers away from earth’s surface. 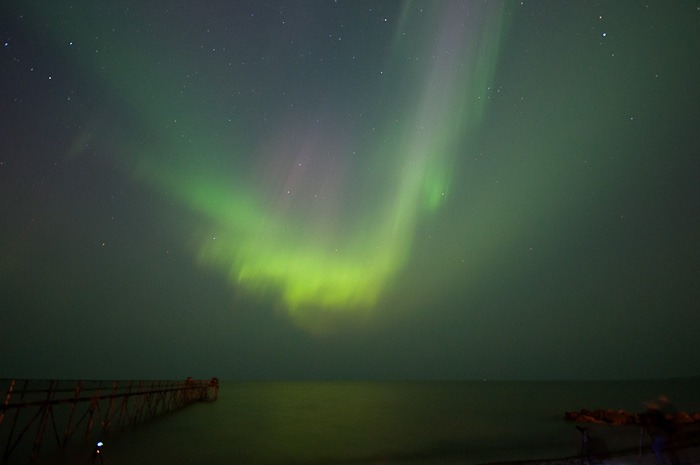 After some more time, say 30-40 minutes, you may get a real show. Suddenly the sky is light. So light that it is nearly possible to read a newspaper. However, I would recommend to look at the sky instead. A show like this does not come every night. 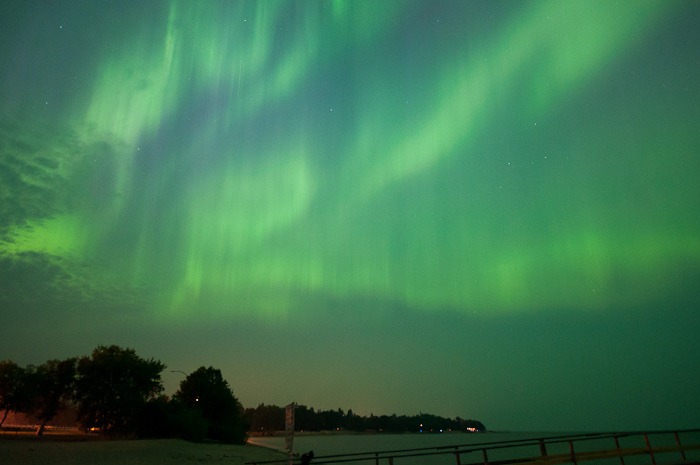 Mother Nature is providing you with a lightshow that you will not easily forget. Even more, these lights inspired awe and fear in early seamen. They thought that the day was starting from the north and that their compass was ruined during the night. 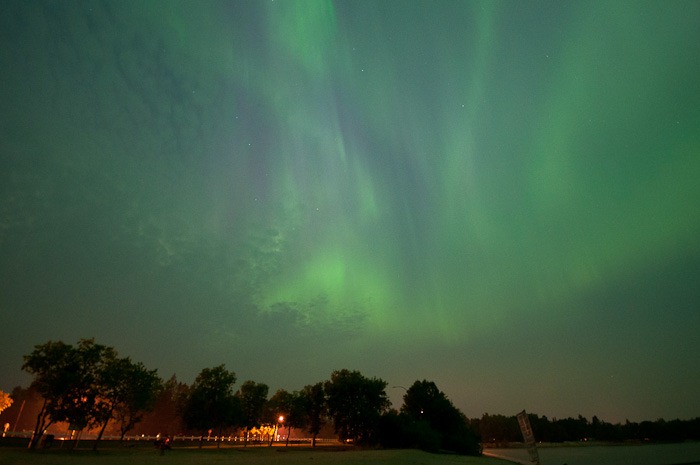 They gave this light the name of Aurora Borealis or Northern Sunrise. When I was observing these lights a few nights ago, most of the light was pretty dim. The camera needed at least 30 second exposures to gather all the light needed for a picture. 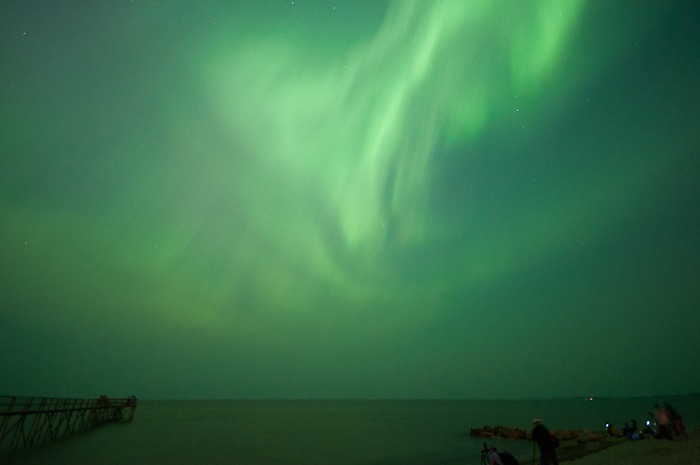 Thirty second exposures get more light, but also make the lightshow look more blurred. The logical next step is then to crank up the ISO of the camera. However, that will bring lots of noise with it. Noise that can ruin the picture. 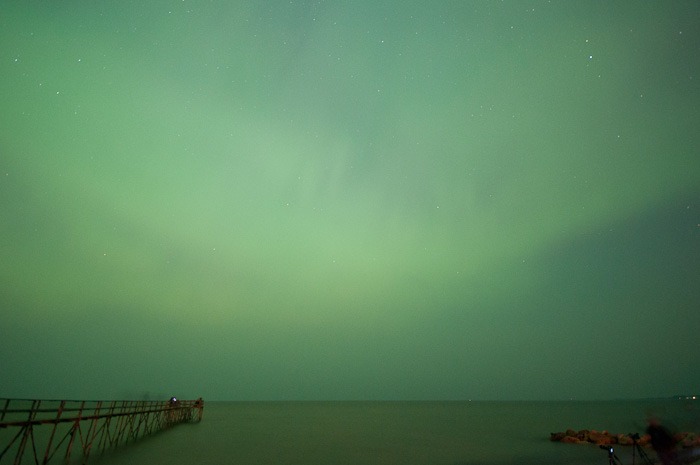 So I kept my camera to a reasonable ISO of 1600, and took the shortest exposures possible. The above picture was a 60 second exposure. You can see the light, but no longer the individual strands of the Aurora. 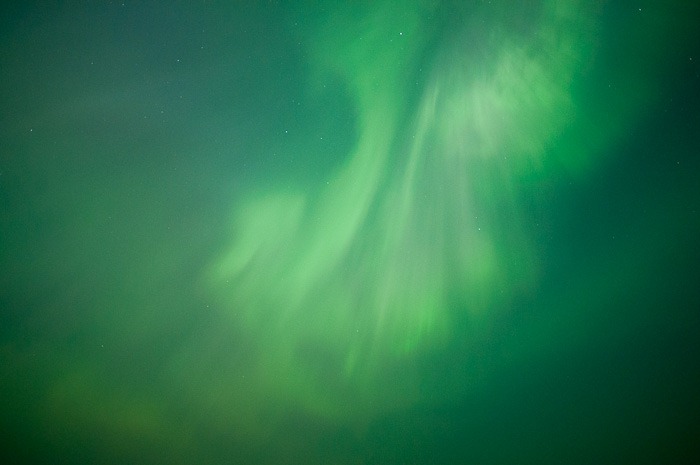 Coming down to get you

Looking straight up into the sky, the Aurora seems to be coming down from all sides. In a way that is correct. The particles that charge the atoms in the atmosphere come from the sun. But by the time they arrive, the sun has already moved, just to keep an old fashioned way of thinking. Of course the sun doesn’t move, we do… 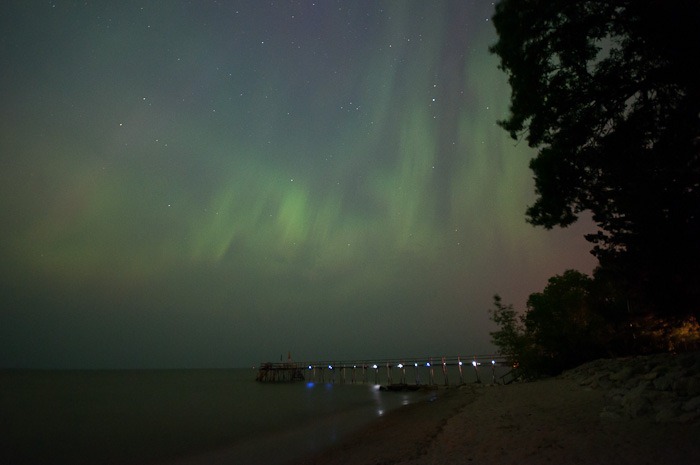 Lightshow over a private pier

After a while, the lightshow subsided, but a faint glow continued to lighten up the the sky. By the time we got to this picture, the “company” had had enough of it and wanted to leave. I could have stayed a few hours more.

Anyway, this was a nice and successful night out. What was even better, there was a little breeze coming off the lake over the beach. That breeze was enough to keep the mosquitoes at bay. Not one single bite during the lightshow, wahoo!