Landscapes, people, festivities, all have something in common, apart from the photographer. The pictures taken mostly ignore the details. 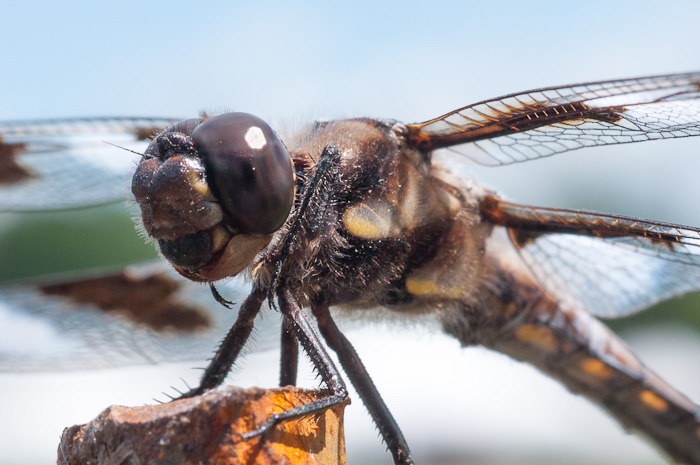 So, this time I decided to go back to the details that surround us. Just to show that those details are also worthy of a picture.

Of course, for this you need an observant eye, a good lens (let’s not argue about a camera or brand!) and time, lots of it. Now time is not what I have most, so I have to do with the moments that “jump up” to me. 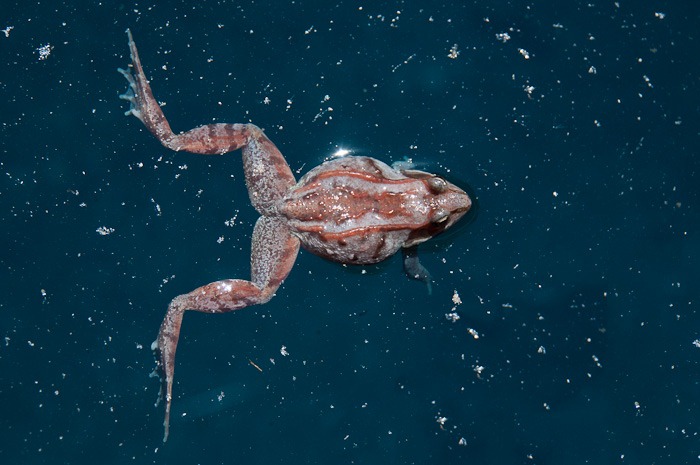 This frog, for example, I saw it trying to escape from the corner of my eye. But I caught it anyway. The colour contrast and the movement got my attention. This frog looked to me like a raw steak trying to swim. As far as I can tell, this is a “juvenile” leopard frog. It seems a bit undercooked though. 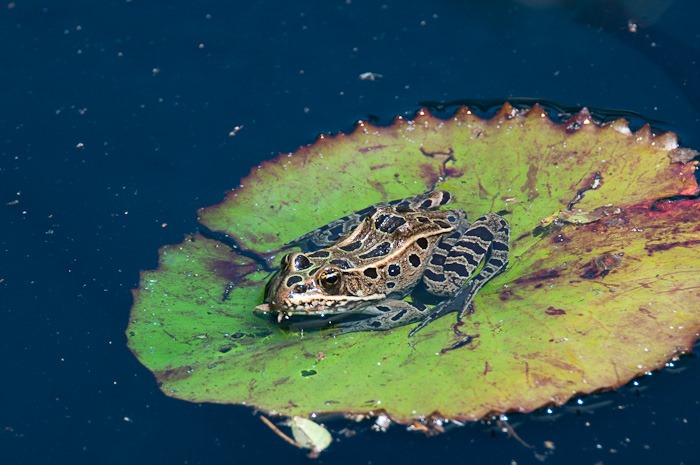 This one looks like a Leopard frog to me. Just let’s not tell any leopard about that.

So, I continued my walk through the English Gardens, the Leo Mol Sculpture Garden and later through Fort Whyte Alive and found a lot more details. 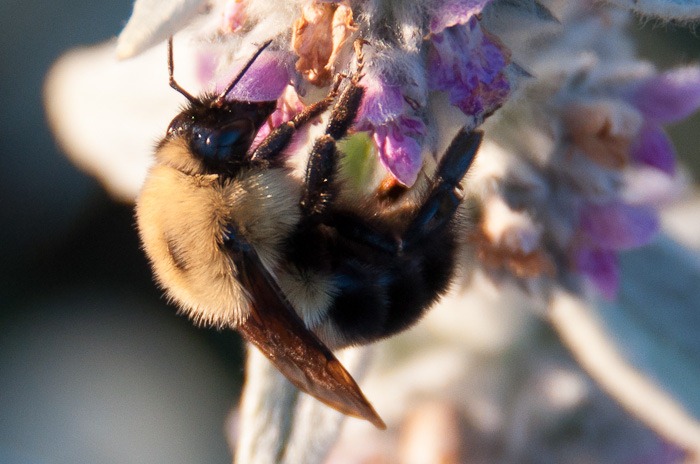 This little bee with a heavy fur coat, wearing it even in summertime.

Apart from the lead picture of the dragonfly, all of these pictures have been shot with a 28-300mm, mostly all at the 300mm position. The Twelve Spotted Skimmer of the lead picture was patient enough to let me come very close with a 60mm macro lens.

Now if you want to see a Twelve Spotted Skimmer from a little distance, here is one: 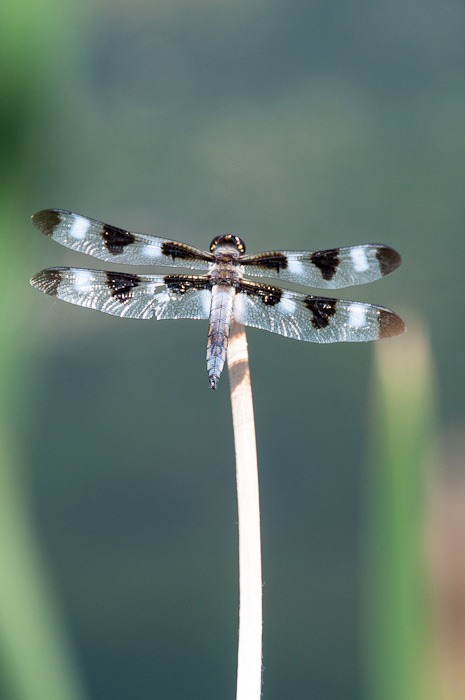 Having light blue and black spots usually doesn’t give you much camouflage, but this colour scheme is nearly the same as its surroundings of reeds and grass. These guys do everything to get close to their favourite meal of mosquitoes without getting seen. Way to go! Bon appetite! 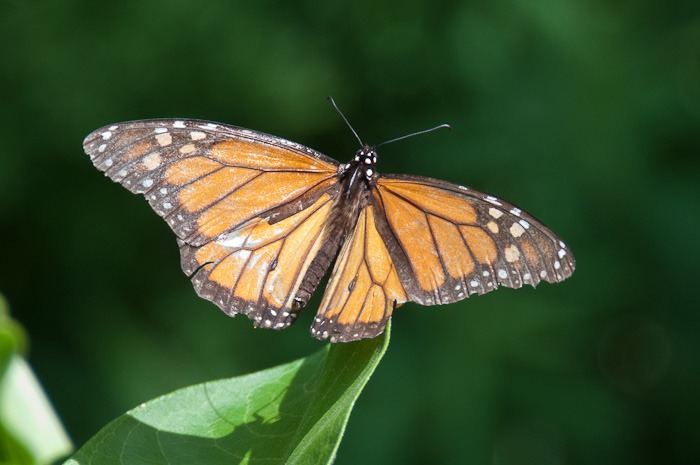 Others, however do nothing to go unnoticed and show off as much as they can. They probably taste horrible. The above Monarch butterfly has had a lot of flying hours behind it. Much of the colour on its wings is gone and even pieces of wing are missing. If this were an airplane, it would be grounded forever. 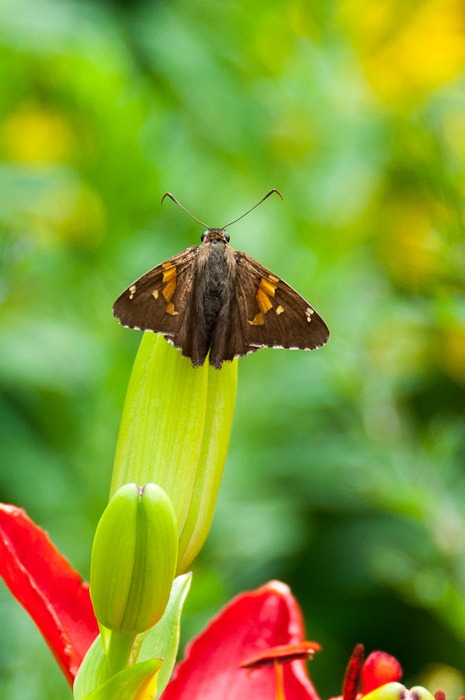 This Silver Spotted Skipper gets its name from the fact that it skips from plant to plant at a rate that would make your lens go nervous. This picture was taken in the early evening hours, I guess it was a bit tired of the day. At least I got a shot of it. 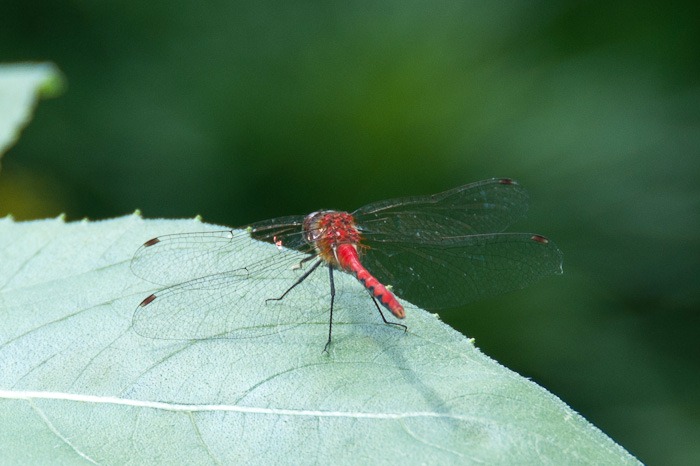 The Dragonflies are very prolific this year, perhaps in the hope of getting lots of mosquitoes to eat. Let them eat as much as they want, the more the better. This White-Faced Meadowhawk was taking a rest from flying around.

Dragonflies must be warm to fly. Temperature in the thorax must be over 25 C. Most species are active during the day and bask in the sun to warm up. Some large dragonflies generate heat by shivering their flight muscles before take-off. This allows them to fly early in the morning or at dusk. 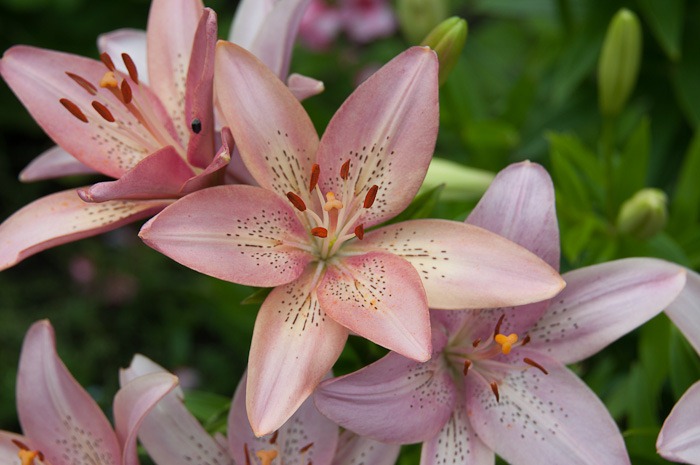 Just to finish this post with some more details that do not fly away when I approach them with a camera. The above lilies are not wild, they were planted in the English Gardens. Photographed in the “golden hour” just before sunset, they really show off their beautiful pastel colours. 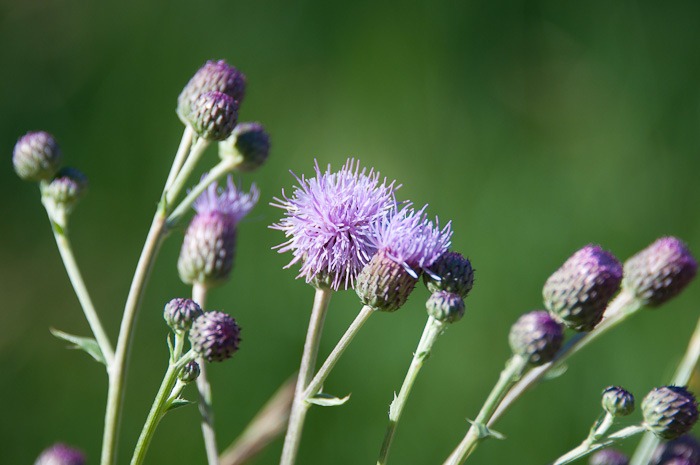 Other plants are wild, and may become a nuisance once their seed pod is dried out and hard. It clings to anything with a coat, fur or a few hairs on its legs. My legs perfectly qualify for a solid adherence of the seed pods.

So goes by a few days where you can shoot activities, landscapes and still you go past the beautiful details that are so close to you. I thought I’d try to rectify that situation…