They don’t exist anymore. Right? Some can come close and are more a tradition than a simple fair. The Red River Exhibition is more than just a country fair. You can even buy stuff… 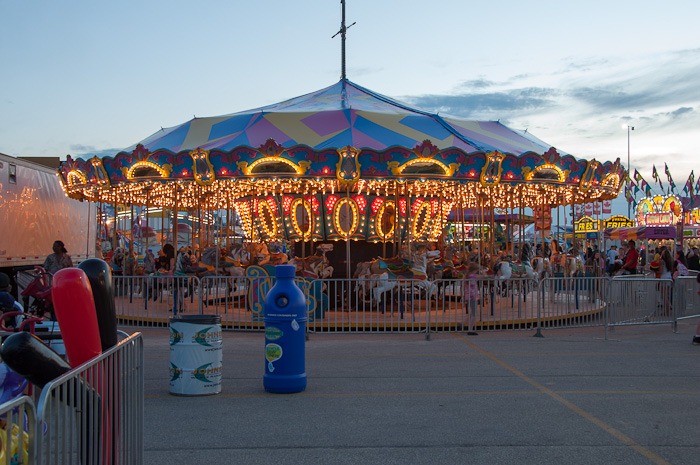 But nowadays you can buy stuff anywhere you’ll tell me. Sure. But to combine car sales with a country fair with Ferris wheels and amusement, that’s new to me.

When I was a boy, about 300 years ago, the fair in my city was held on the market place. Two days before everything was open, the people started to mount the rides. All the city was excited to see what would be there that year.

What we forgot was mostly what had been there the year before, often, year after year the same carousels, the same donut stands and so on. But we enjoyed it every year again. 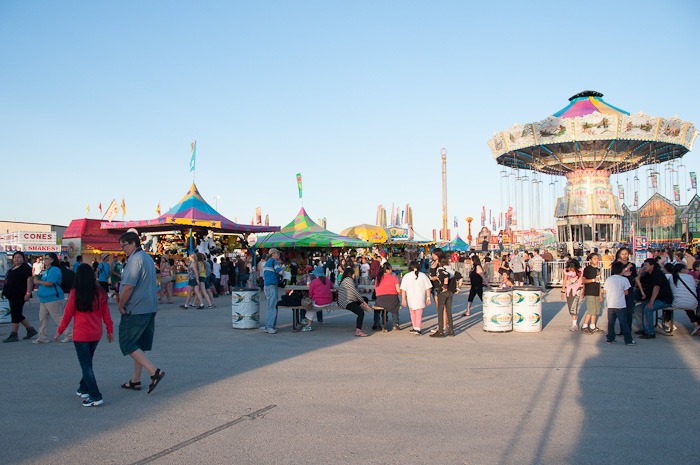 Then came the computer games, where action is more important than getting out and getting dizzy from riding the carousels. Or getting drunk from the beer or lemonade. Or getting a little exercise to begin with…

The Red River Exhibition removed the “getting drunk” part, no alcohol is served on the premises. Oh, well, let’s enjoy this with some freshly squeezed lemonade instead. 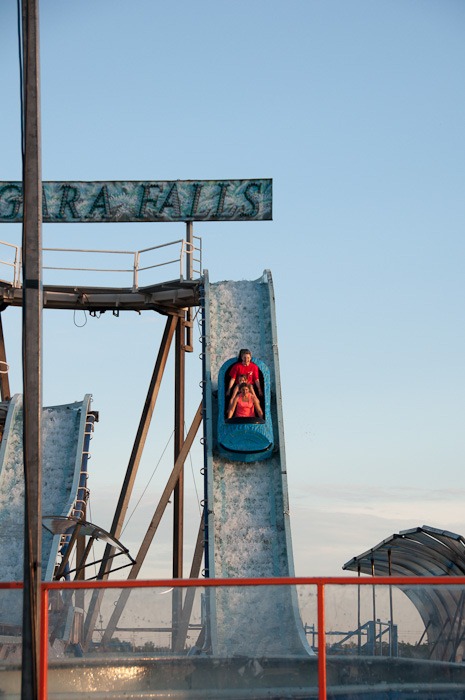 The rides are more spectacular than I remember from my home town. Some of them are the same, others seem from another world. The haunted house is still the same, but we never had water slides. 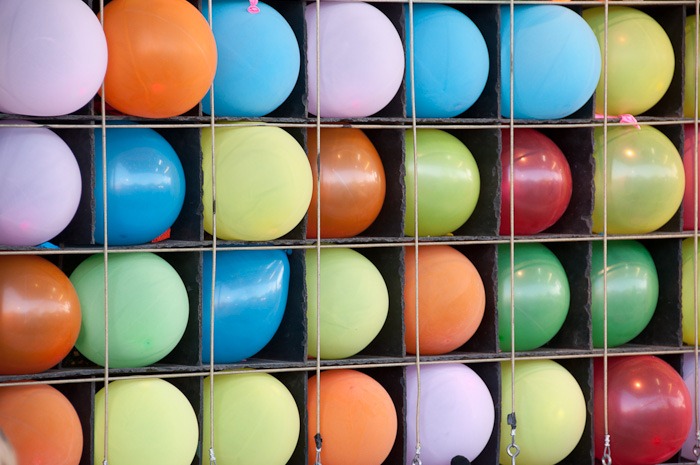 We did have the balloon stands, whenever you got a certain number of balloons popped, you got a prize. That hasn’t changed and is still fun to do. 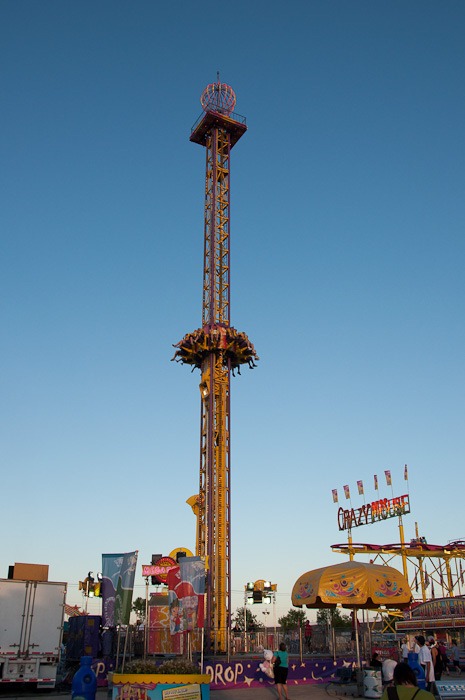 The free fall stands, however didn’t exist in my time. Today they haul you up to the height of an eight storey building and drop you to the ground. Or nearly. The last few meters are used to break and land you safely back on your feet. 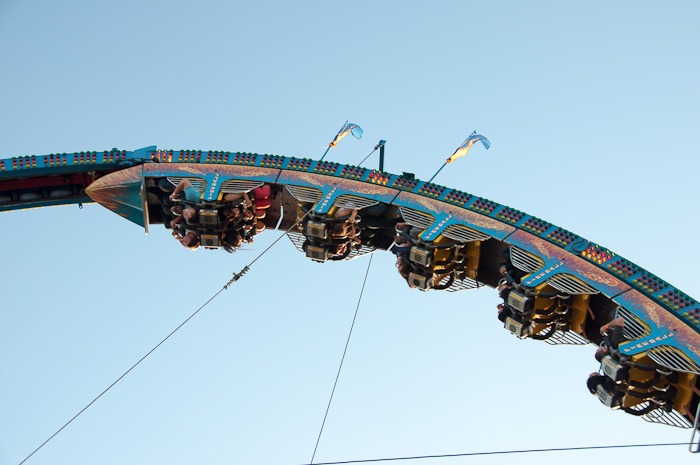 Getting upside down was a no-go in my time. Probably because the materials and technology to do it safely were not ready yet, who knows. 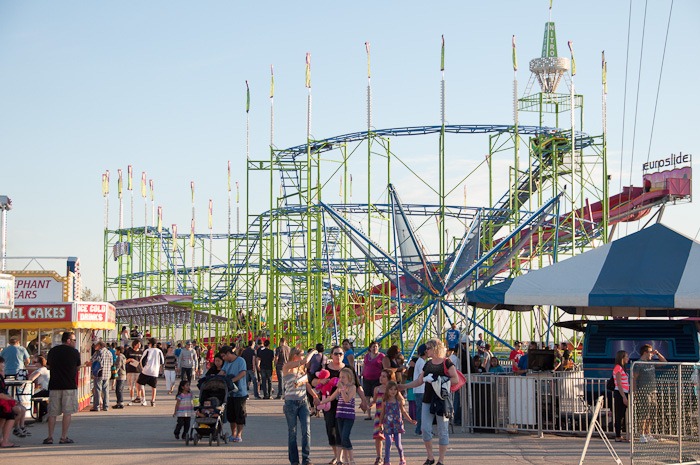 What we called the “eight track” was a jumble of rails, mounted in such a way that the little car on it made all kinds of turns and ups and downs. All to make you dizzy and even more, everything to get your arm around the nice girl sitting and screaming beside you. This one looks way bigger than in my memories, though 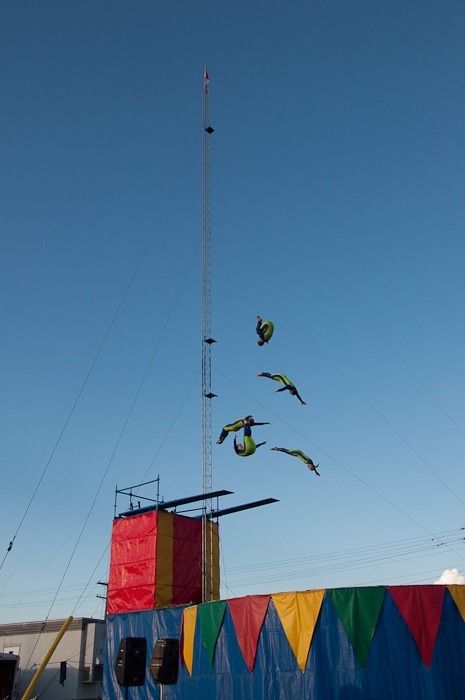 And then you have the acrobats. While back in the day we had jugglers juggling with everything from balls and oranges to burning torches and chainsaws, today we have the high-divers. Either all together, making a big splash, or 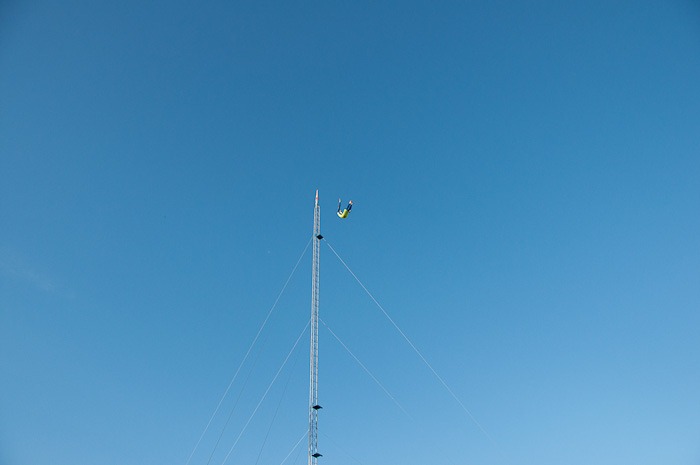 All alone from about 25m high, something like a seven or eight storey building. All getting into a mere 3 metre deep bucket of water.

Of course, when the day runs on its end, night photography is at its highest. With the Manitoba Foto Friends we had a small meeting of photographers. All there to shoot at least the fireworks. But before they went off, (the fireworks, not the photographers) there was lots of time to shoot other photogenic views. 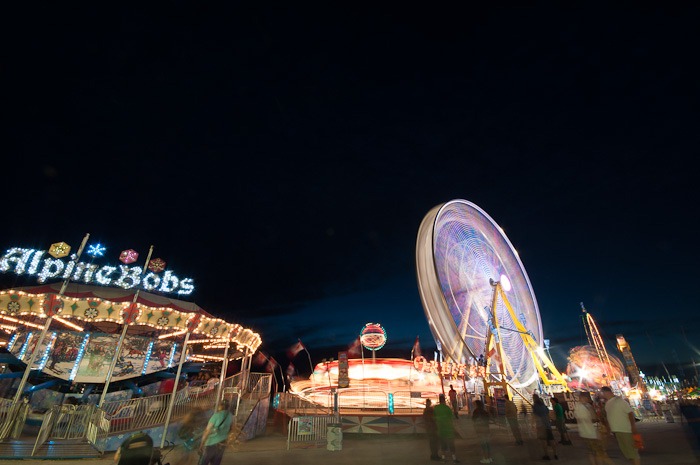 Rides in the night

A classic ride shot in the night. Who can resist such a view? Ghosts are optional. 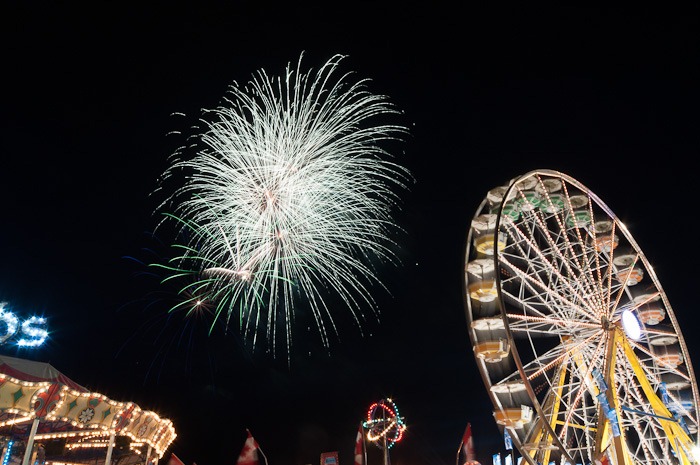 Having already set up my tripod for these shots, I decided to stay where I was and shoot the fireworks from there. Perhaps a way to get a more interesting foreground to my pictures. The Ferris wheel was moving slowly during some of my exposures, giving it the effect of moving fast. 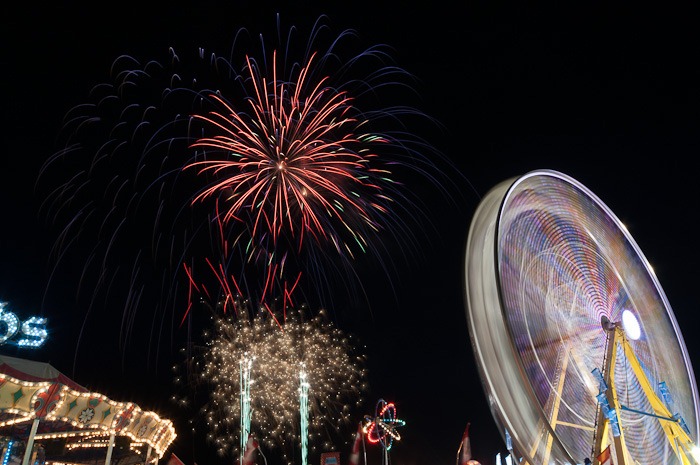 At other times it was moving fast, removing the effect of movement altogether and presenting us with a disc of light instead.

All in all a nice evening, both entertainment-wise as photographically-wise. If you have time and want to go there, the Red River Ex is open until June 24, 2012.