In 1850, Reverend W.H. Taylor was instructed by the Bishop of Rupert's Land, The Right Reverend David Anderson, to establish a church for the settlement expanding westward along the banks of the Assiniboine River. 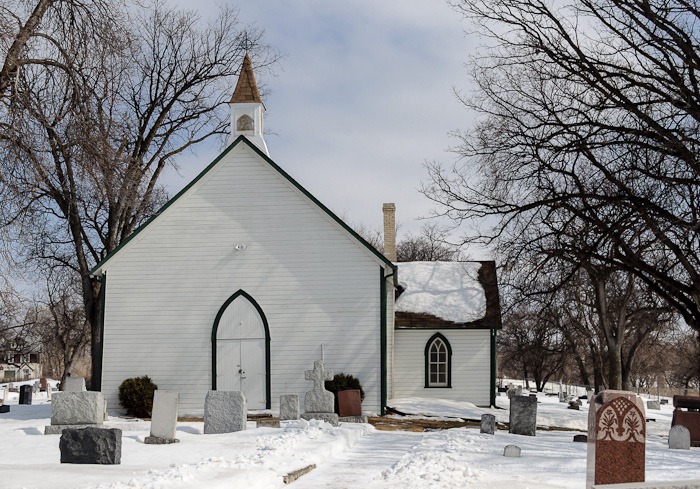 On June 8, 1853 the cornerstone of the new church was laid and by the end of the year the large log building was completed. Located on high ground, this site was chosen for its association in the minds of the settlers with shelter and deliverance from

the devastating spring floods of 1826 and 1852. Consecrated as St. James Church on May 29, 1855, it became the focal point of settlement along the Assiniboine River and gave its name to the surrounding area.

St. James Anglican Church is one of the oldest buildings in Winnipeg, and the oldest surviving wooden church in Western Canada. In 1922, a large contemporary style replacement for Saint James Church was constructed nearby. Old Saint James Church, however, continues to be used for summer services and weddings. 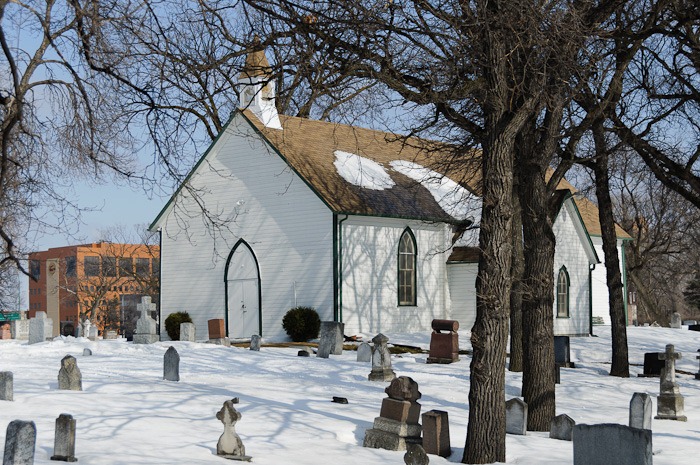 Well, that is after it had been condemned in 1936 due to bad foundations. In 1967 it was restored to its former form. The white siding had protected the logs from rotting. That year, the church was put back into service. Now, the parish of St James has two churches, the “new” one, built in 1922 and the old one here. 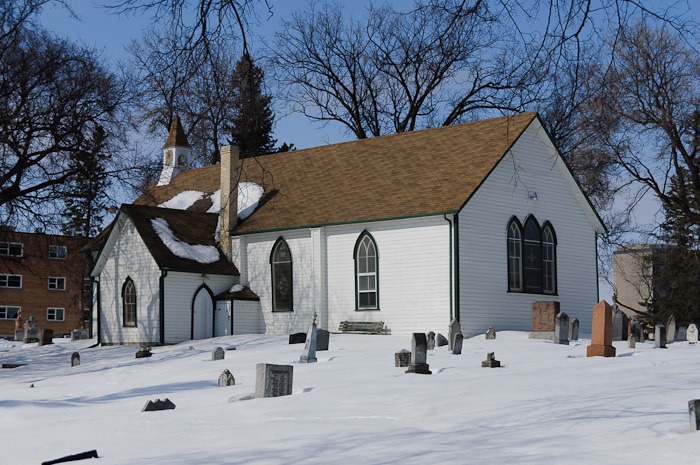 Where are the logs?

When I started the “project” of writing about this building in 2010, I could only take pictures from the outside. Somehow I always missed the period where it was possible to get inside as well. Also, in 2010, my idea was that there were no active services held, only the cemetery remained active. A little research on the web corrected that idea. But I still never managed to get there during opening hours. 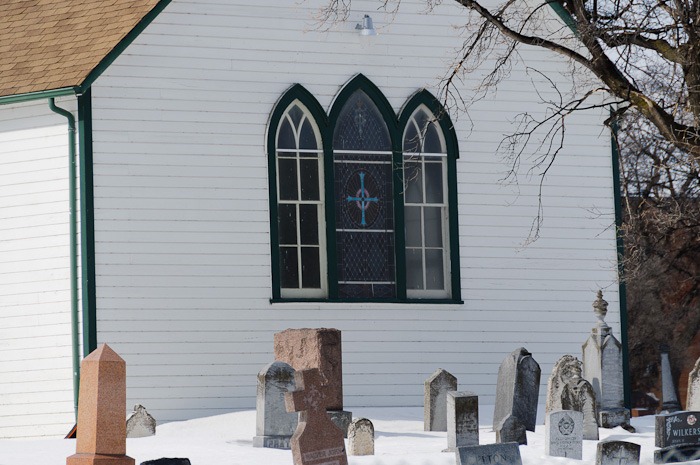 Glancing at the stained glass

And opening hours usually means service, and in a small church like this, taking pictures during service is a delicate matter I don’t want to get into. Or I’m just chicken, that’s possible too.

So I could only get pictures from the outside and from the cemetery. In 2009, that cemetery was half flooded and the headstones didn’t stay upright. They have not been corrected until now. I’m not sure if that is a task someone will undertake. Some of these stones date from the beginning of the church in 1853. 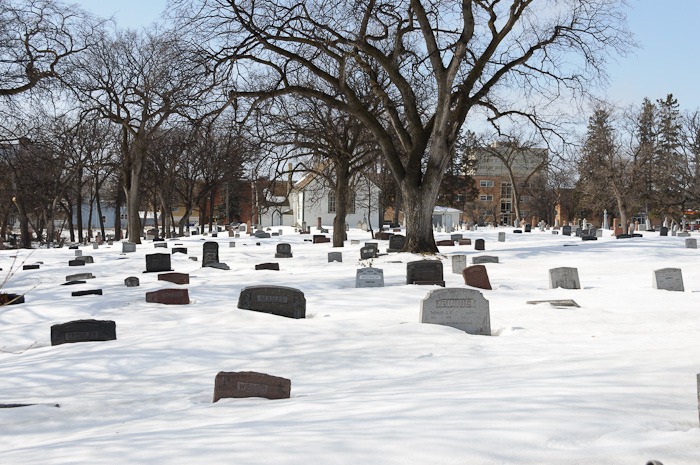 An interesting fact is that there are many Ukrainian headstones in the cemetery, but there is no Anglican church in Ukraine. Food for thought. 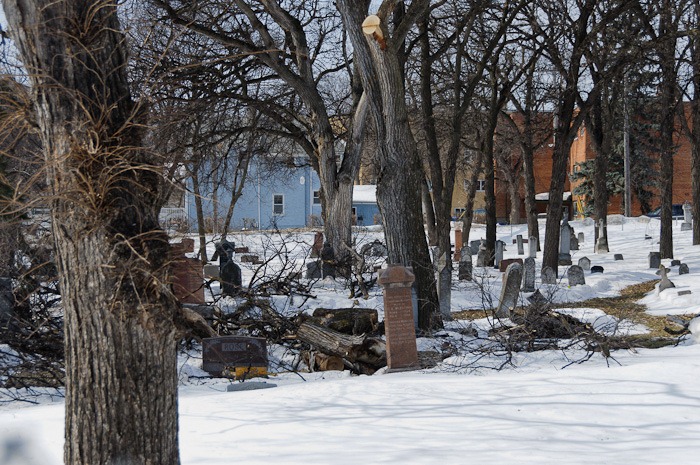 Maintenance on the cemetery

Even after the church was condemned in 1936, there were still services held on the cemetery and burials were still conducted. That meant that the ground was still sacred and no building could be done on this land.

Last month was my chance to get some pictures of the inside, without disturbing service. Open Doors Winnipeg gave me this chance. 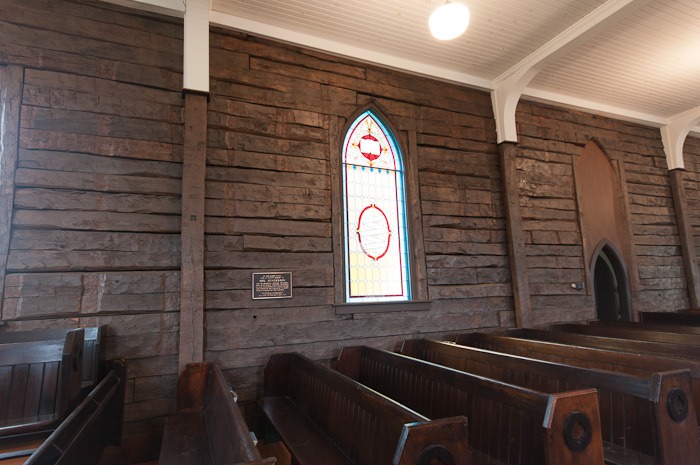 While the building is called a Log Church, the outside alone will give you no clue of this. The inside has been renovated in 1967, where plaster was removed from the logs. Probably from a lattice fixed on top of the logs. 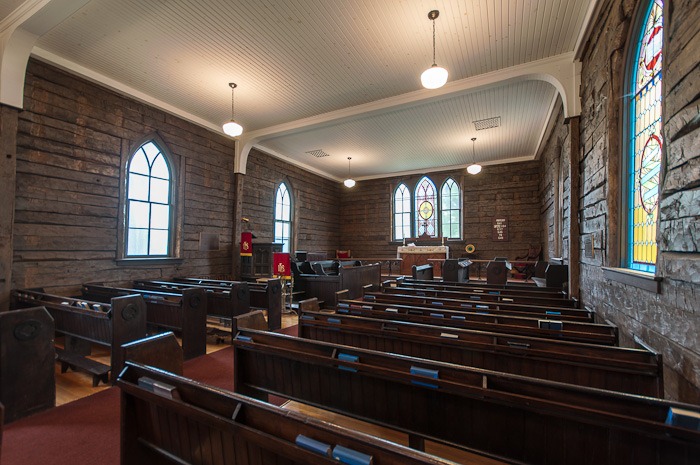 The church is beautiful on the inside, but don’t expect any ornate gold or brass. It’s a simple church, made for worship.

But the glass windows seem to be oddly simple. The old church was too old and too unstable to keep those windows, so they were removed and installed in the “new” church. The old one just kept white glass. 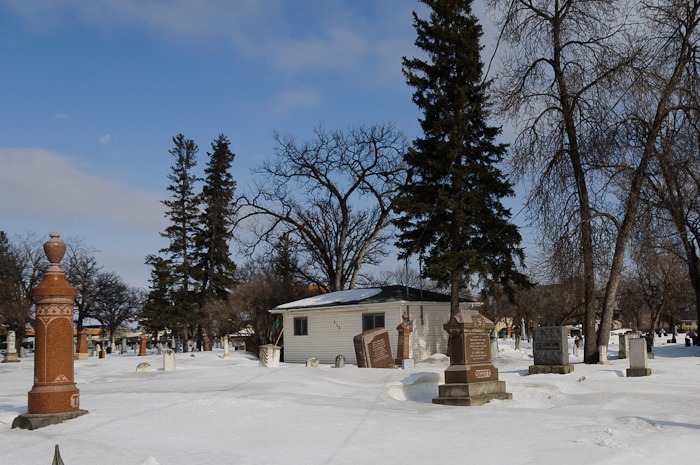 Nowadays it’s pretty complicated to get a picture of the church without getting any modern buildings as well. The city has crept up around it, I guess that all cities do that.

If you get a chance to visit this church, for service or not, don’t forget your camera, it’s an interesting place to see, with lots of history.