Today, I went for a walk instead of staying inside for lunch. I have posted before about my lunch time walks in the Assiniboine Forest and it’s still a pleasure. 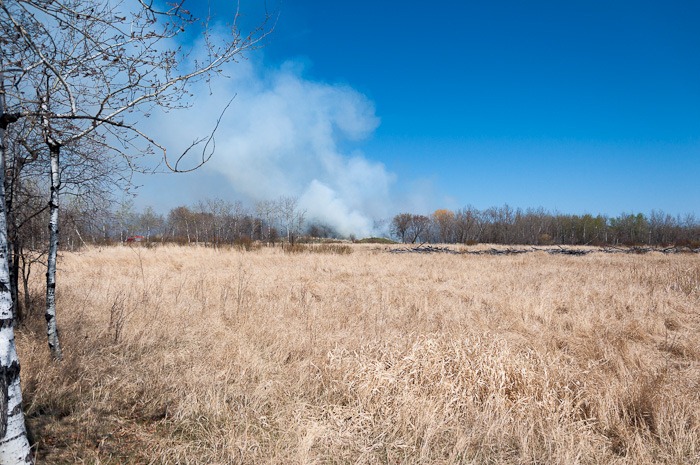 So, today I decided to take some small paths, far away from the people and see what I could find, photographically. After about 30 minutes walking I smelled

smoke. Since the forest is inside the city I assumed that this smoke was coming from some barbecue and didn’t pay more attention to it. It only lasted a few seconds. Continuing the walk, a few minutes later the smoke smell was back, stronger this time.

Since I was alone on this small path, with nobody around I found it a bit unnerving, to say the least. I decided to go back to the bigger paths and see what was going on. That’s where I was greeted with the view from the lead picture.

Obviously, I was not going to pass up on an opportunity to take pictures of a fire up close. I have had another fire earlier this year, but this one was in the forest; the smell of smoke was quite different. 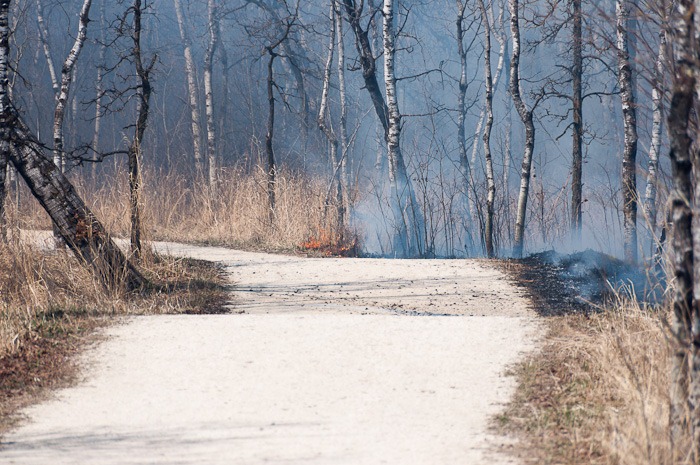 When I got a little closer, the side of the path was black and still smoking. Hmmm, not the best view in town. Even more so when I noticed that the fire was still burning, unchecked. I expected to see firemen all over the place, cordoning off the area, but no, nothing of the kind. 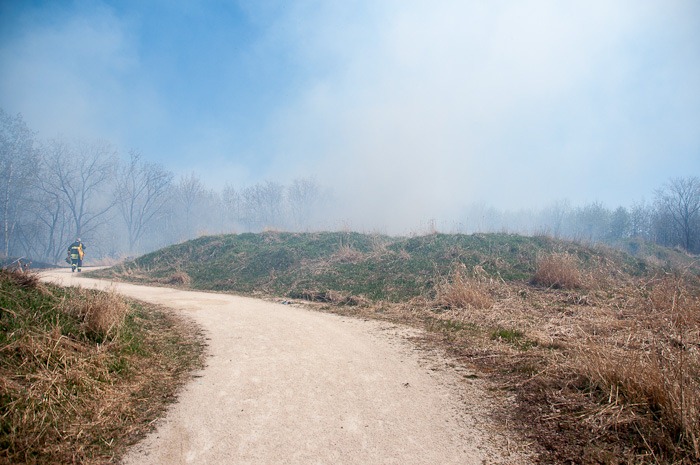 Firemen were there, but they seemed to be without water supply and fighting the fire with brooms. That made me think that even if there was a lot of smoke, the fire mustn’t be that dangerous. I went a little closer. No firemen were pushing me away and I even asked one of them if they knew what started it. 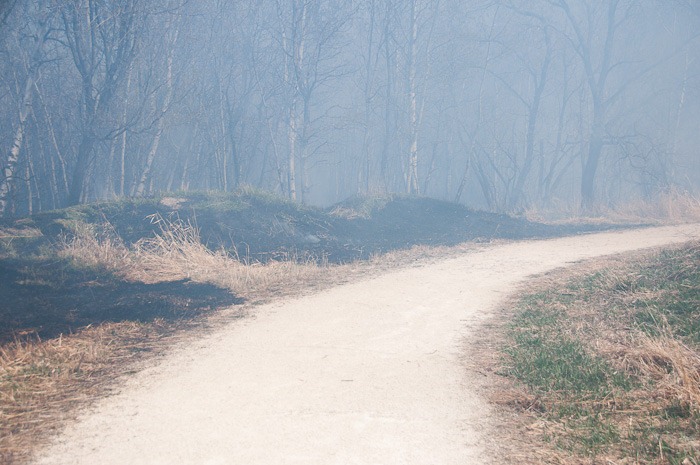 The answer was “Probably a cigarette…” I knew that smoking was bad for the smoker’s health, but this made it also dangerous for other people’s health! 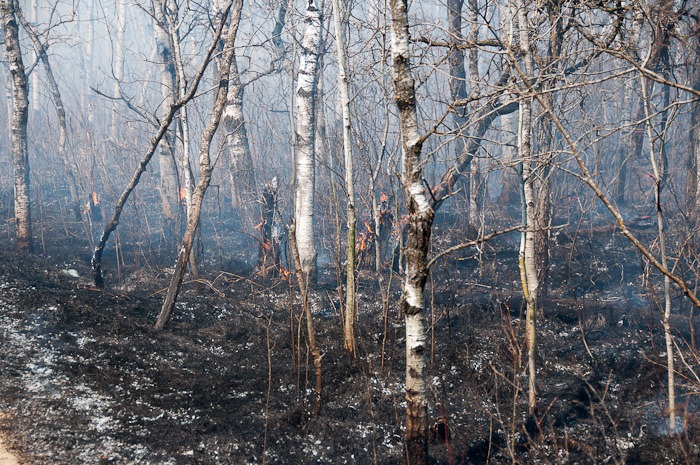 Looking around, there was low fire burning everywhere. The fire was classified as a “Grass fire”. Ok, I guess we have to count in the dead trees with the grass, because those were burning pretty well too. 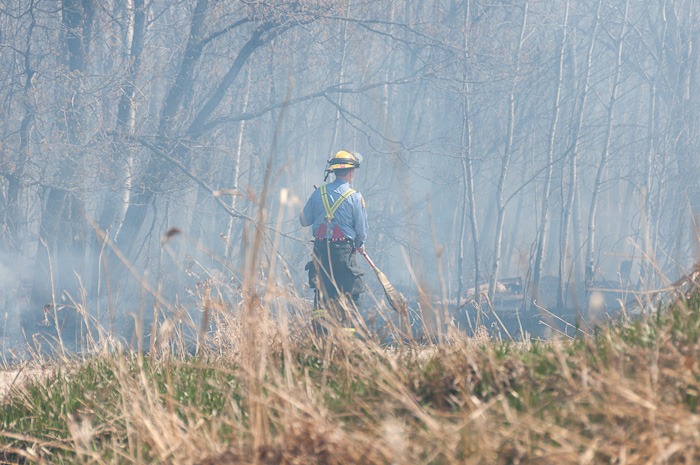 Fighting fire with a broom

Following the firemen a bit closer to the heavy smoke, that smoke started to burn my eyes, and I was surprised (like I said) to see them with brooms. In fact those brooms were to clear the old leaves and burning ashes and to sweep them back in the fire. That way the fire would not cross the path. 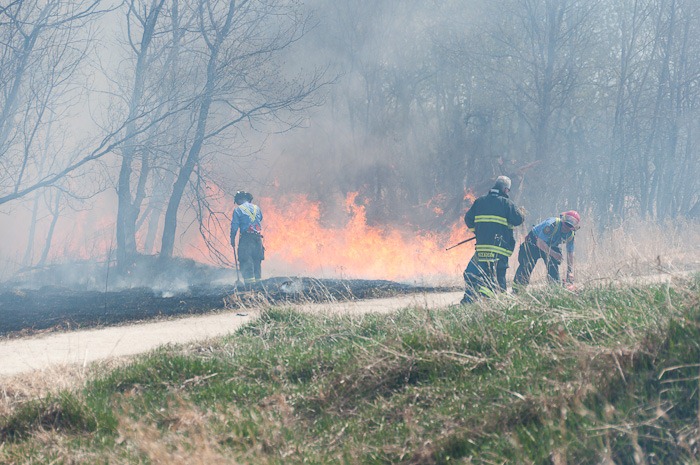 Brooms and leaf-blowers were the only tools, I didn’t see any hoses and water. Overhearing a conversation between two firemen, I heard that the fire had gone around them, unchecked. And yes, the fire was way behind me as well. No high flames, but slowly burning away all the dry grass on the ground. 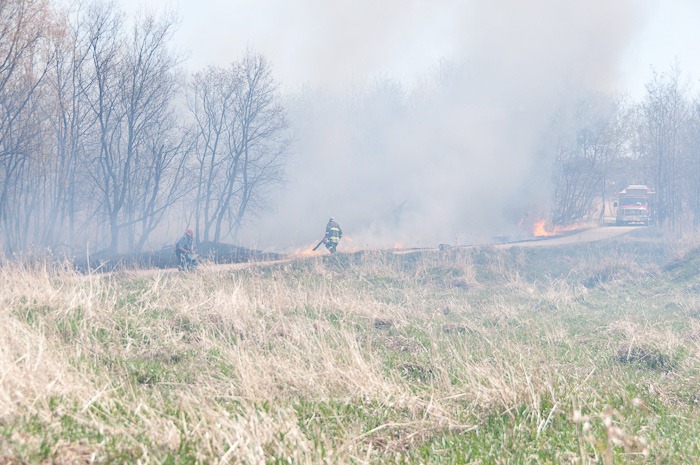 All that grass does give off a lot of smoke and some places burn higher than the average grass blades. As you can see in the foreground of this picture, that grass is tall and dry. An excellent fuel for a great fire. 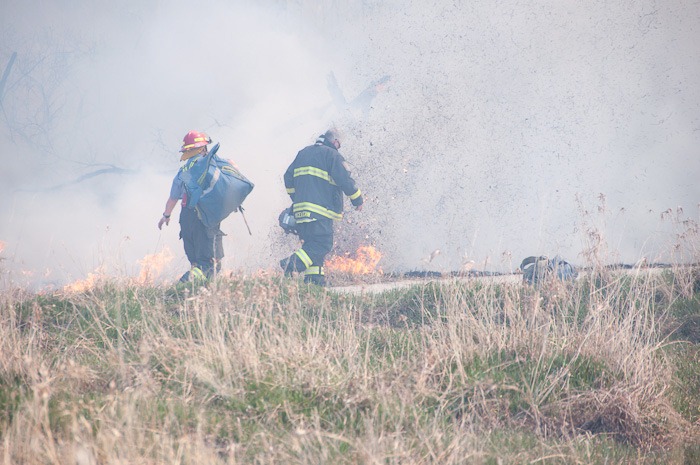 Another danger with this fire was that there were lots of dry leaves still lying on the ground from last year. All those leaves could easily start to burn and fly away, igniting other parts of the forest, far away. Leaf-blowers and brooms were used to keep them in check. 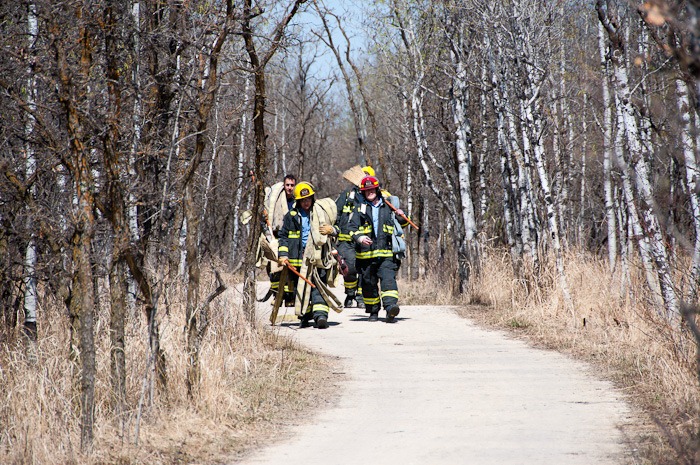 Then I decided to go home, my lunch time being over and still without food in the stomach, I crossed these newly arriving firemen, armed with hoses and… brooms!

Once I was out of the forest, the water tank trucks arrived and the dousing of the fire had begun. But the fire put up a fight, it lasted for several hours before the fire was mastered.

All that for a quiet lunch hour!