Few atmospheric phenomena can give a feeling of emptiness like mist. Walking in the mist always makes me feel “alone in the world”. 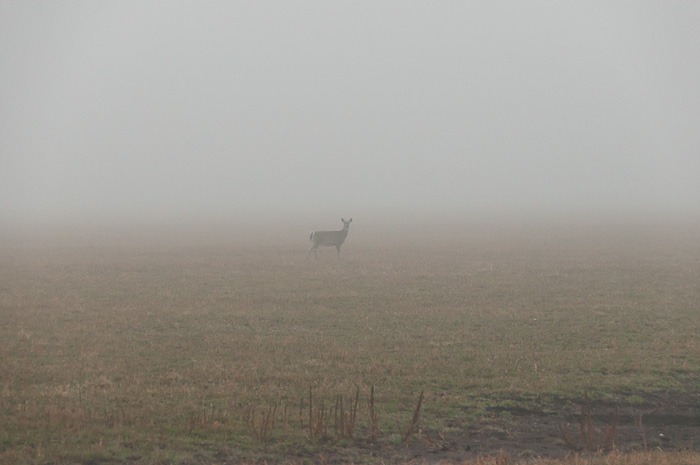 Well, at least if I’m walking alone. The quietness of a misty morning, however, is easily understood, but not so easily

photographed. Taking a picture of mist usually results in a grey image, with little or no details about what should be there. Even if the feeling we have is one of quietness, a picture needs a little more than grey and softened contrast to have a meaning. 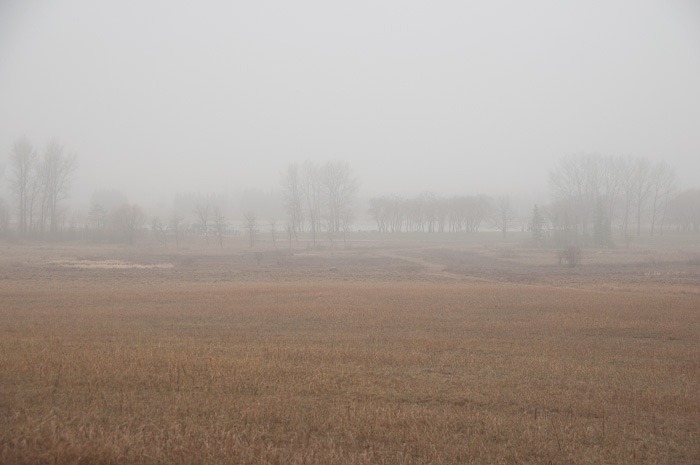 Easier said than done. All pictures of this post were taken in the early morning, and the only corrections applied were those of White Balance. For the feeling to be conveyed in the pictures, the blue of the early morning didn’t do any good. 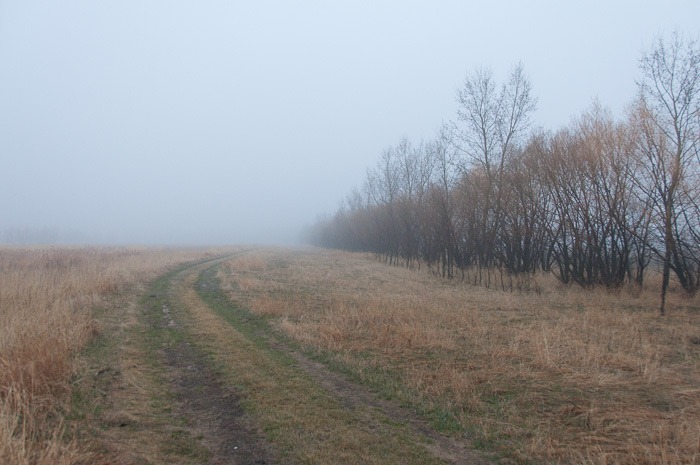 Blue hue in the morning

Even more, that blue hue we love when the morning has hoarfrost or fresh snow doesn’t even look natural in mist. So, out with the blue colour. Now, if we also click the “auto Tone” button in Lightroom or in ACR, we end up with a picture that has no fog at all anymore. That’s a big no-no.

The sound this morning was incredible, here is about a minute of it… 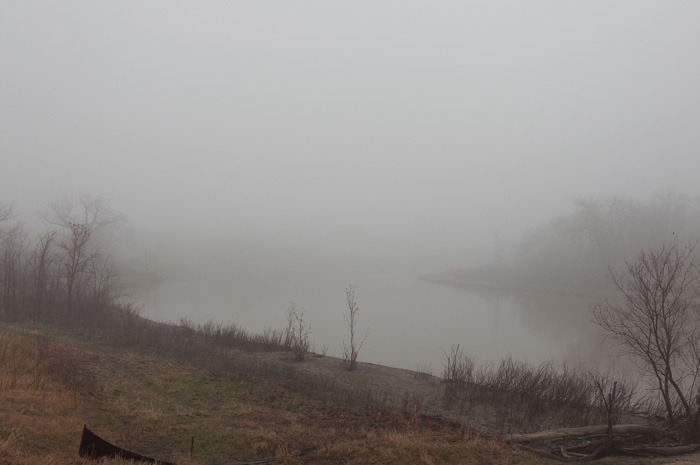 Taking a picture of a river bend is always a good start for a misty-moody picture. Except that the bend is lost in the mist. That the chipmunks were walking over my shoes was a nice little detail, but impossible to take when the camera is on a tripod 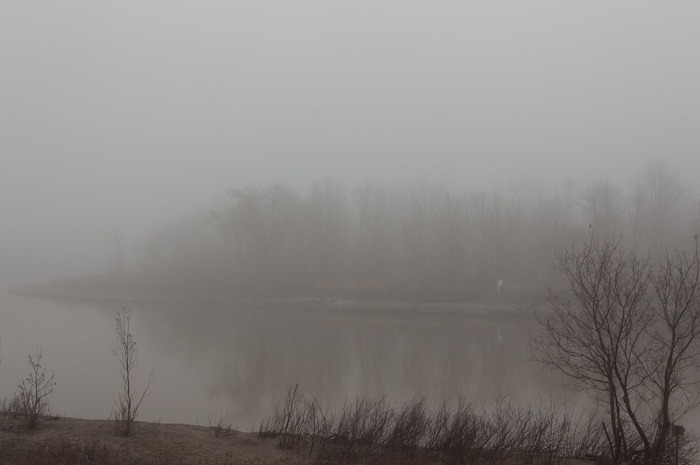 A straight picture of nearly the same place gives a different mood altogether. It gives the idea of an island, close by, but far away.  Reflections in the water are distinguishable but at the same time indistinct. 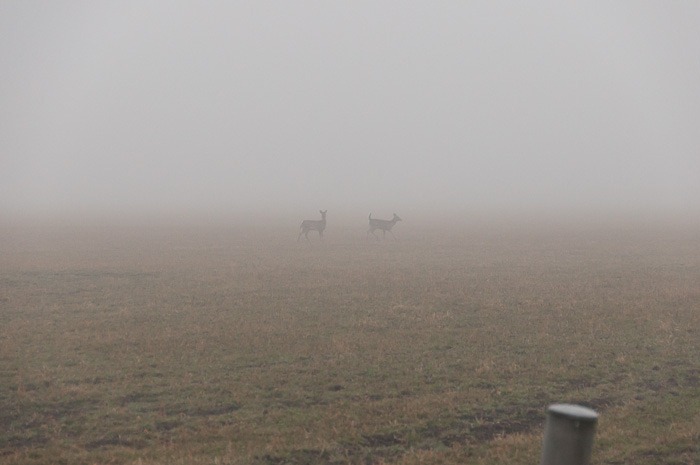 Deer instead of cows

In the province where I come from, pictures of Holstein Cows in the mist are very much sought after. Here in Manitoba we don’t have those cows in the fields, so I had to make do with deer. The only difference between the cows and the deer is that the deer usually take off when they see a human figure lifting something in front of him. If that is a camera or a gun, they don’t care, they’re off! I was pretty lucky to get the lead picture and the above picture without scaring them too much. 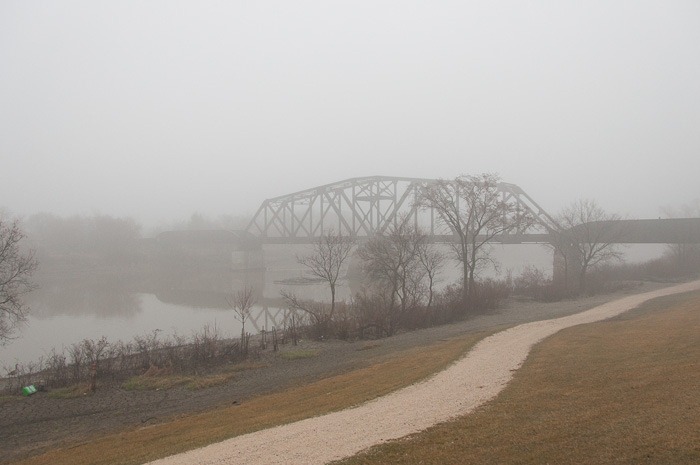 Then there are the “classic” pictures of objects that are recognisable, but still shrouded in mistery, ehm mystery… 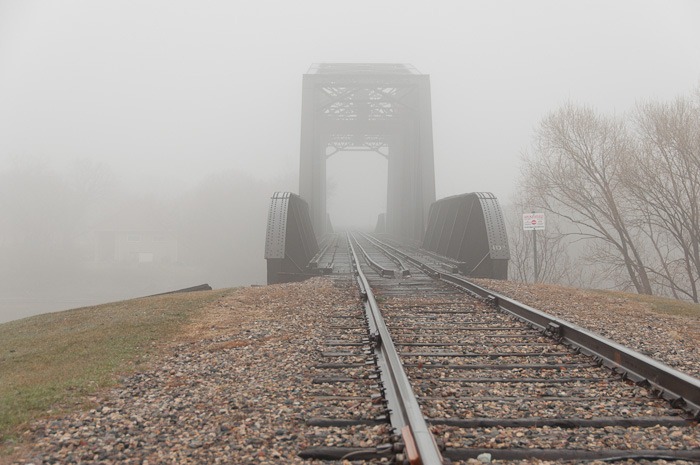 Another Bridge into Nowhere

The “Bridge into Nowhere” always comes in mind and I never resist taking such a picture. They don’t always come out the way I imagine, but they are still nice. Although there were no trains coming from either way, staying on rails or railway bridges is not allowed in Manitoba. You may get a hefty fine for that if they catch you. I left before anybody noticed I had been there… 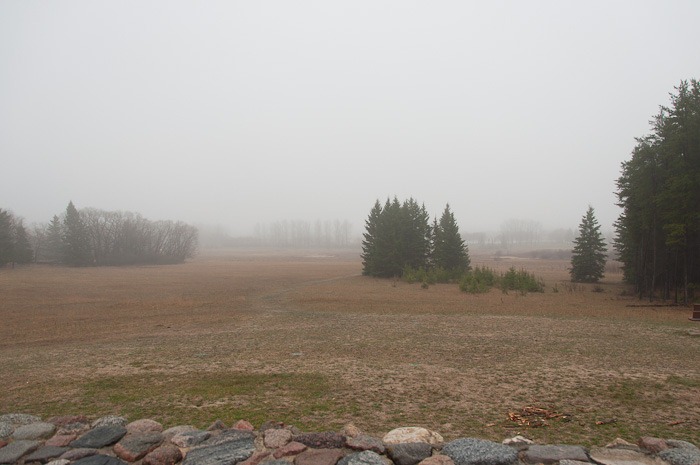 Then it was time to try some photographing “in layers”, meaning a distinct foreground, middle ground and background, all in the same picture. That’s also easier said than done, but mist helps a lot to accomplish this.

I tried to catch this misty, lonely feeling brought on by the mist… let me know if I accomplished my task here or if I need to practice some more.