By now we all understand that the sun is approaching its solar maximum of this 11 year cycle. We also know that this goes with more and more interesting Aurorae. Auroras, for those who want to keep it in English. 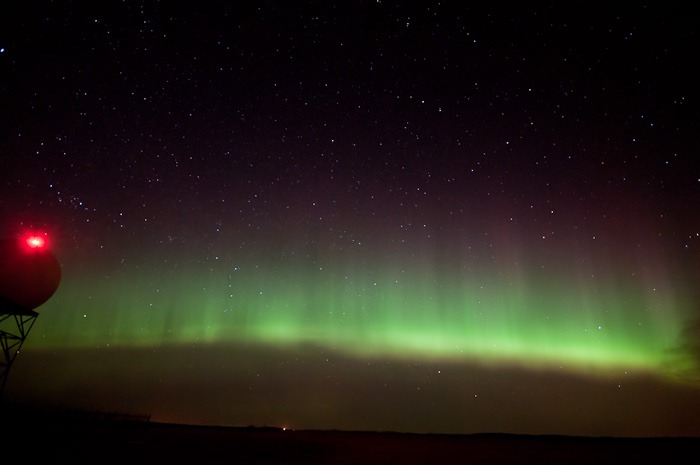 But does that mean that we now get to see these Northern Lights every evening? Nope, most of the time they remain as elusive as the Yeti. So, waiting is the Maître Mot…

Waiting for an Aurora to show is like waiting for an elusive bird to come and sit on the feeder you put in your garden. It’s a question of luck. There are many sites around on the internet, that can “predict” when and where an Aurora will light up.

I’ve gone through many of them. None stayed. Nowadays I look for the “dials and gauges” that some websites show, based on measurements done with satellites. 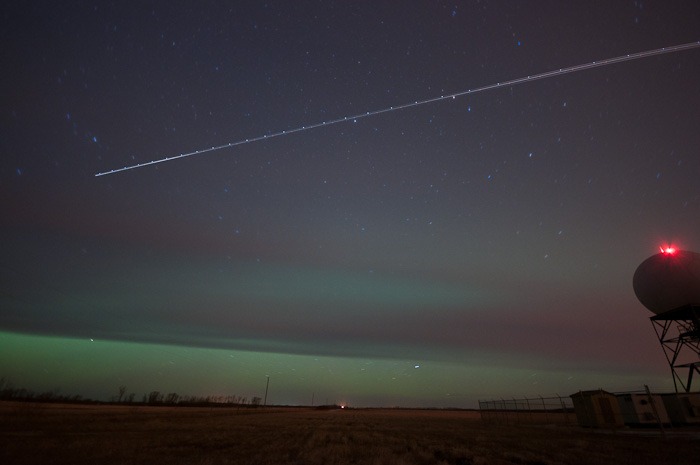 So, when the satellites are down thanks to a radio blackout by the sun, something will happen.

Add some more imaging based on these measurements to that and you get a better idea of the situation. Some of these informational graphics can be found here. I found that these are most often right. Sometimes not. 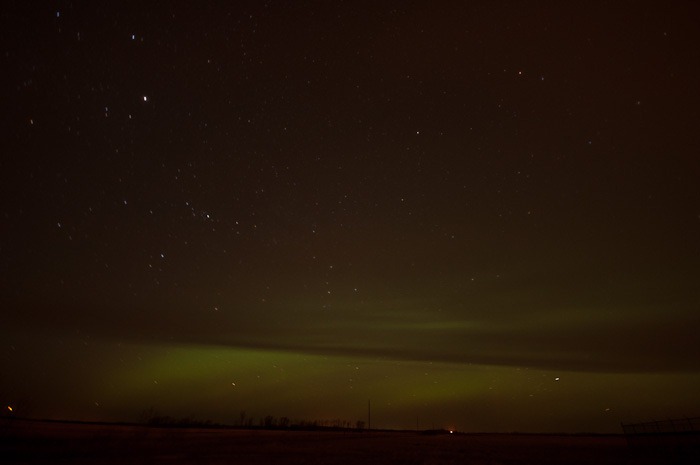 So, last week some Foto Friends and I went to the Doppler Radar station near Woodlands in Manitoba. The sky is way darker there than close to the city, so more chance of seeing something interesting.

Or so I thought.

We arrived there around 10PM, a slight cloud cover high above us. Hadn’t foreseen that one. Of course, the Aurora sites can give you the most spectacular sights, if there are clouds, you can kiss them goodbye. 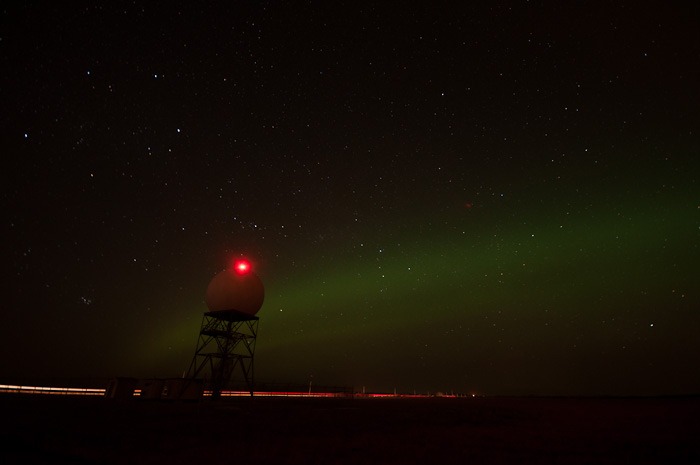 After a while, my eyes started to get used to the darkness, which was not as dark as in the Whiteshell Provincial Park here, but still pretty dark.

Until about 12:30 AM (00:30) we were shooting star trails, clouds and a little bit of a greenish glow on the horizon.

I was just about ready to pack it up and go home to a warm bed when someone turned the lights on. 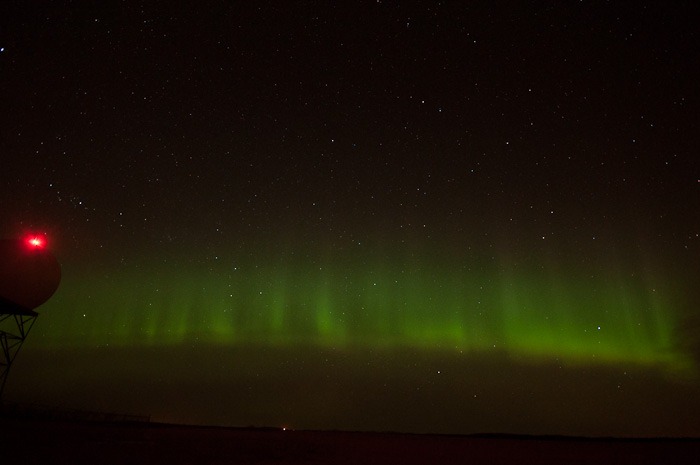 At first faint, I needed to push my camera into a corner where I don’t like it to be, namely to an ISO 3200, to get a decent shot.

Then, ok, I’ll not keep any tensions like that, you can see for yourself.

Before, I had to boost the levels of my pictures to get close to the photos other members of the Foto Friends were getting, and I always thought I did something wrong. This time, I got lucky. 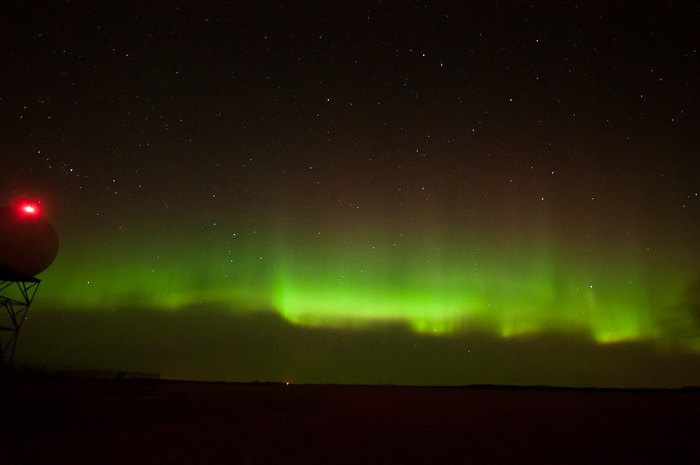 These pictures have been taken with a fairly low ISO of 800 and shutter speeds of about 10 seconds. 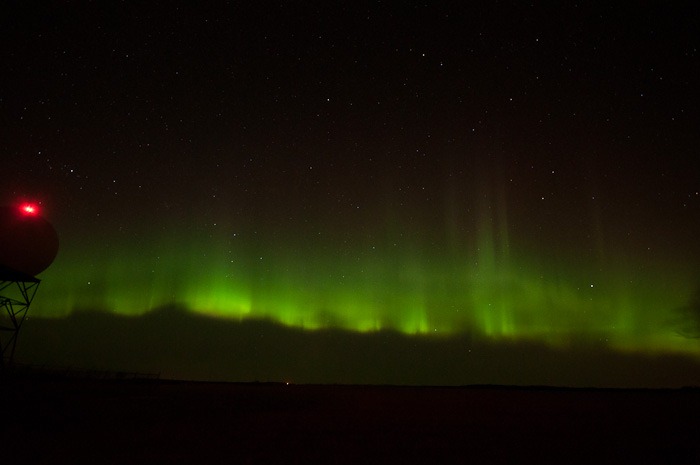 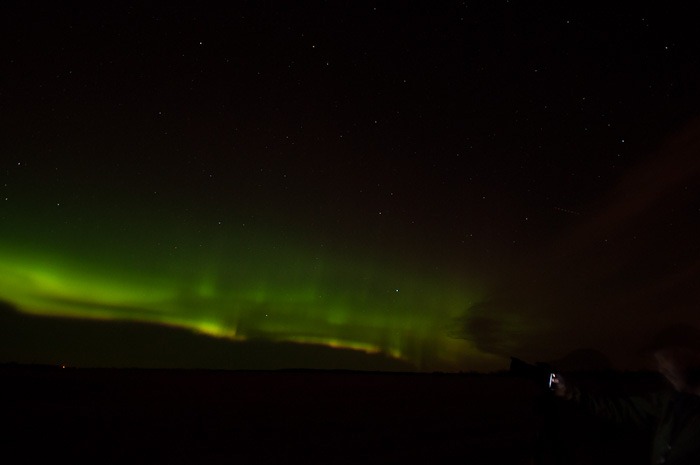 In the above picture there is a fellow photographer, checking his display. The display is sharp, because it’s on a tripod, the photographer became a ghost.

After the first bursts of light, everything died down a bit and the glow became more diffuse. And with that light dimming a fair bit came the higher ISOs… 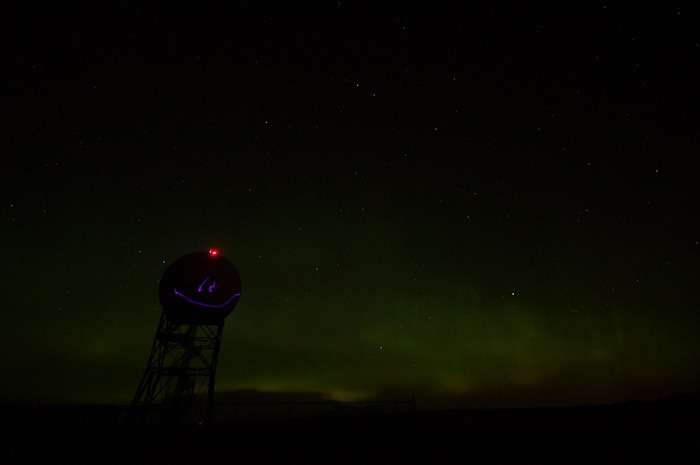 And if there is practically nothing to see, one can always count on a laser pointer for some added interest. 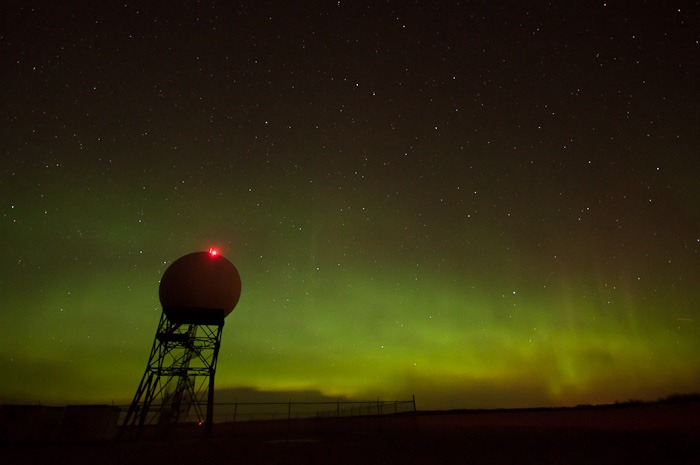 Then, as a last salute, the lights came back for a few minutes. As you can see, way more diffused and less defined. Hmmm, that’s the same thing, I think. 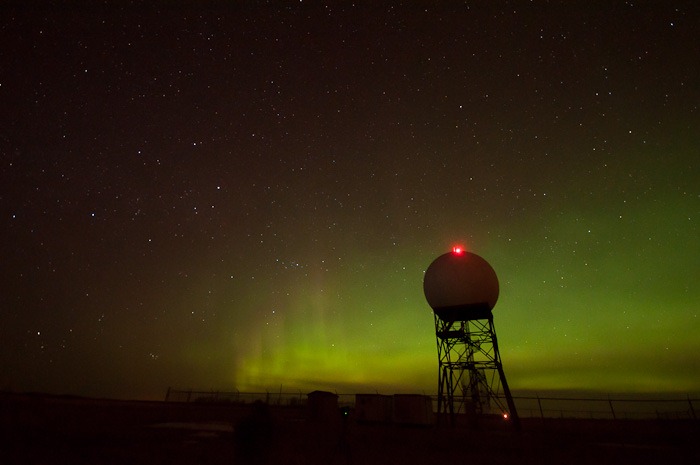 A last picture before the show was over and it was time to go home.

As said, these pictures have no other adjustments than a White Balance correction needed after shooting a RAW image format. Basically the camera makes no changes to the captured image, as opposed to JPEG images that are already cooked and steamed like the camera thinks you will like them. I prefer to do that afterwards.

At last some decent aurora shots. Now it’s time to wait for the next Sun Burst and head out again to a dark place out of the city.