Moving over to the dark side

Sometimes I go out at night and do a photo shoot. Many times, this is only for the natural lightshow the Sun provides us with, but sometimes, I can get something else. 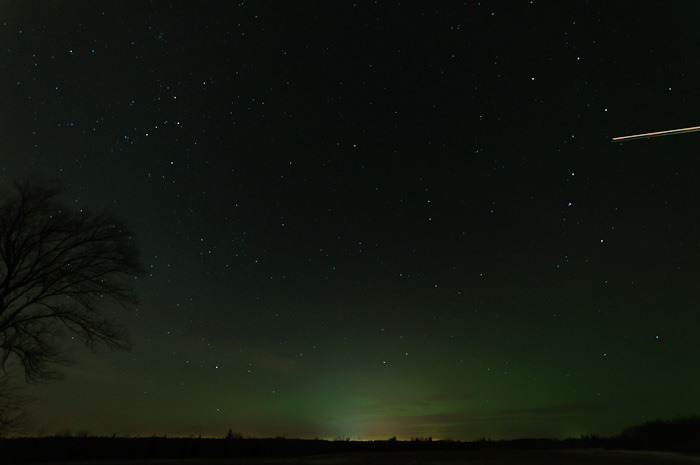 Auroras are a great phenomenon to shoot, but they are fairly rare, even if the Sun is getting closer to its 11 year solar maximum. So, what else is there to shoot with

a standard DSLR without any astronomical extensions? One would suppose that with a standard 18-200mm or even a 15-55mm one wouldn’t get far… True, for night photography you would want something FAST and wide, or fast and very long… Sure enough, I have neither. My Sigma 10-20mm is the widest I can get and with a D90 crop frame that  is only as wide as 15mm and relatively slow at f/4… The only thing you can’t reasonable do without is a tripod.

So now is the time to go and cry about material you don’t have and stay inside, right?

During Winter time, the skies are often very clear, moisture is at its lowest in the atmosphere, so all those twinkling stars are in fact twinkling a lot less. They make for better pictures like that. 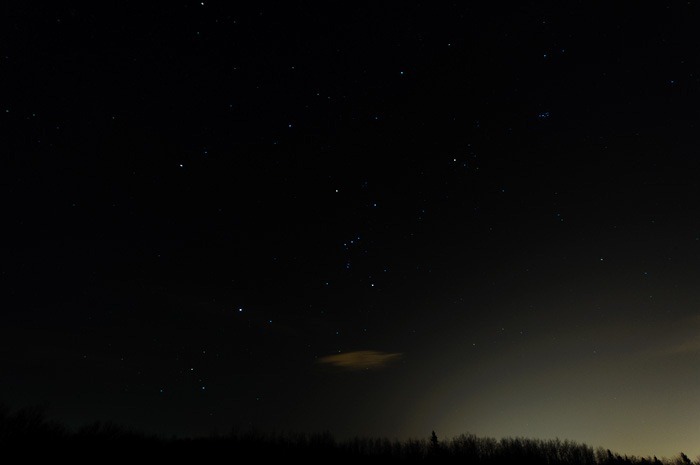 City of Winnipeg, about 25km away

Being a city boy myself, I have never really had a good chance to look at deep dark skies. Most of the time there was this orangey light that blocked my view. It wasn’t until I was at sea that I saw the Milky Way for the first time in my life. 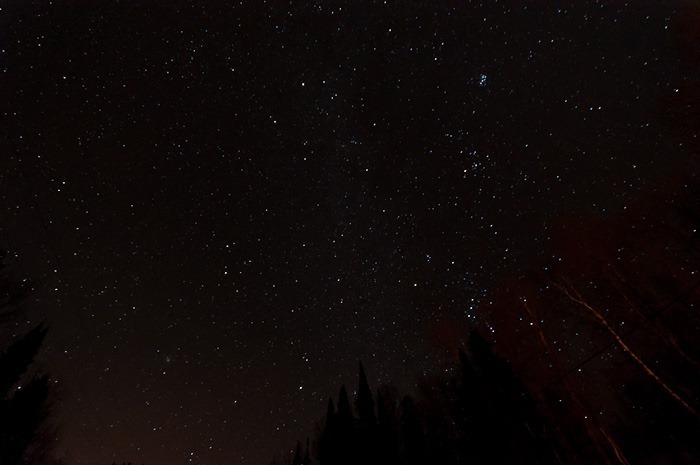 A treasure trove of stars

I also hadn’t seen as many stars before as in that dark night. So when I got here in Canada, I thought that the cities were smaller and dealt less light pollution. Ok, wrong. The cities here are just as bright as anywhere else in the world.

So when I got a chance to go to the Whiteshell Provincial Park lately, I really wanted to go outside and see those masses of stars again. The weather was cool, something like –20C, so the stars would be bright. 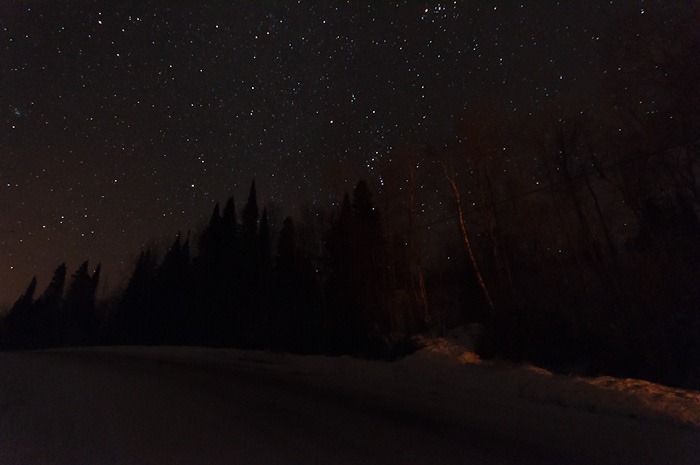 I was not disappointed. There were so many stars that I thought I could read a newspaper by that light. Ok, I exaggerate a bit. The above picture still shows some orange sodium glow from a lamppost about 800 metres away, around the bend. 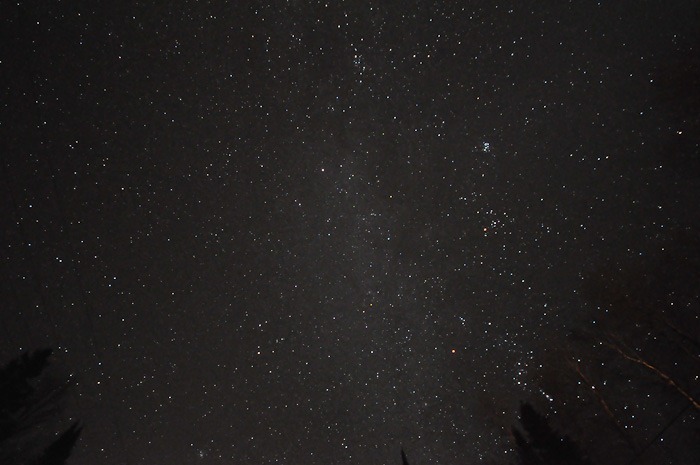 I tried to get a shot of the Milky Way as well, using an ISO setting as low as I could get it. ISO 6400 gives lighter results, but also lots more noise to clean up. Letting the camera do that for you is a good option, but only if you do not look for any continuity between your shots. If you do, then the noise reduction of your camera will give you some really dotty star trails instead. 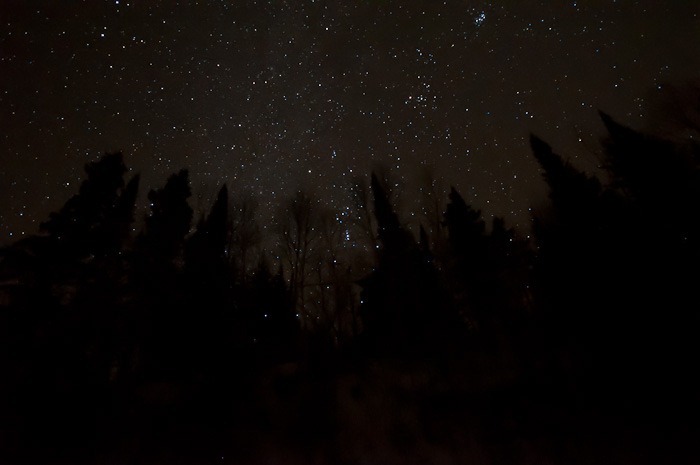 So, I happily clicked away at the stars. Until I saw the trees, looming dark in the foreground. I though I had to do something with them.

So, what can you do when something is dark in the dark? Light it up! 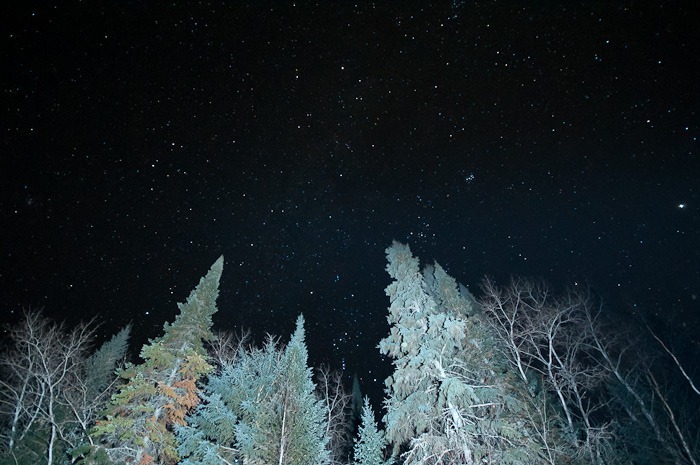 A single full power pop of my SB600 was enough to nearly blow out all the trees. However, that flash is not so powerful as to blow out the stars as well

. So I had lit trees and stars in the same picture, not bad, eh? 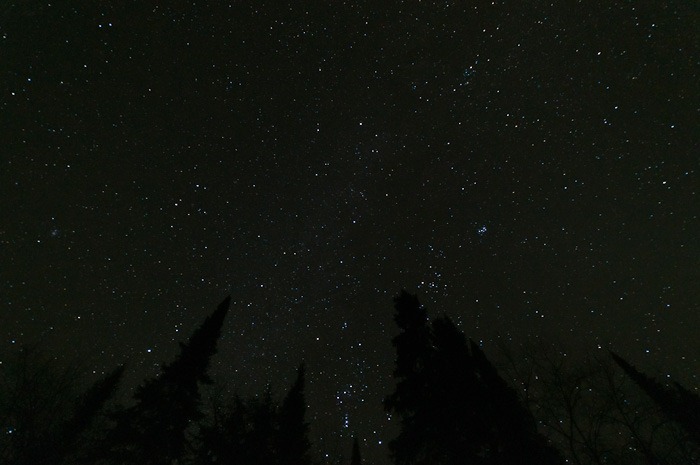 Getting the trees out of the way

Clearing the horizon is something else. Once you have seen those trees in the foreground and you want the stars only, you will need to point that camera up in the sky, nearly vertically to get rid of the foreground. Also you need to keep the shutter speed fast enough as not to get any star trails. Long trails are nice, very short ones look messy. Basically, I noticed that 20 seconds with a 10mm focal length is just long enough to get a good exposure, albeit on the dark-ish side, and no mess. Anything longer will create trails. 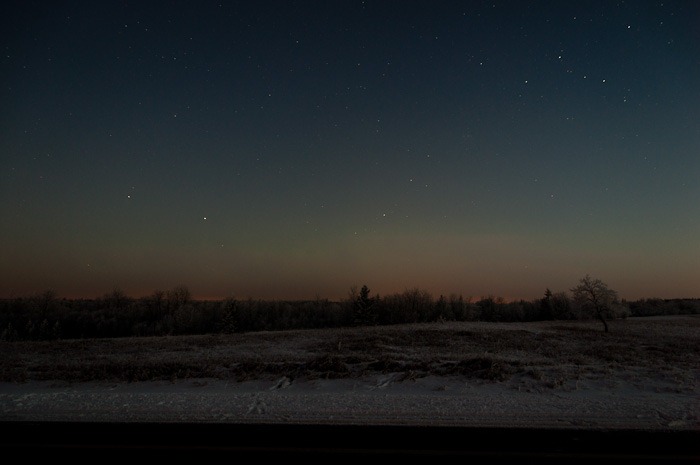 The Belt of Venus starts to show already

Sunrise, soon. The pinkish glow of the Belt of Venus starts to show already. In a few minutes the light will be strong enough to fade away even the brightest of stars. 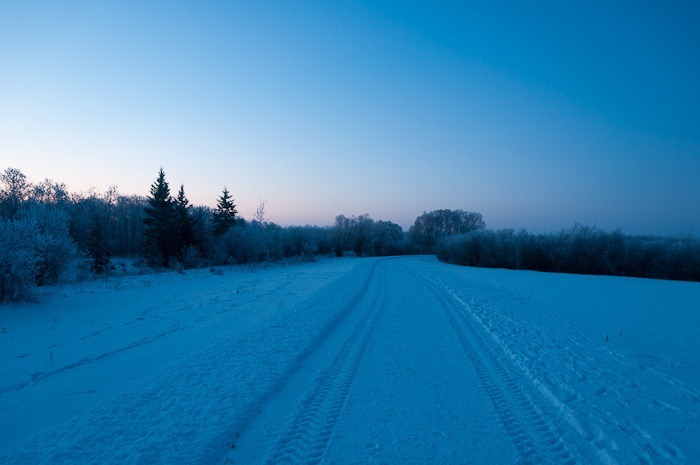 Sunrise in the third system

And then, before you know it, the sun comes back around the other side of the globe. A nice, last picture before going back to bed for a few minutes. After that it is shooting time for daytime events.

So switching to the dark side (of the planet) is not as bad as it seems. Pictures and places can become very interesting in the dark. Think about it.

And join us… on the dark side…