Feeling foggy in the morning…

I thought fog was mostly a Fall or Spring phenomenon. It seems that I was wrong. Last week we had three days of dense fog, in the middle of Winter. 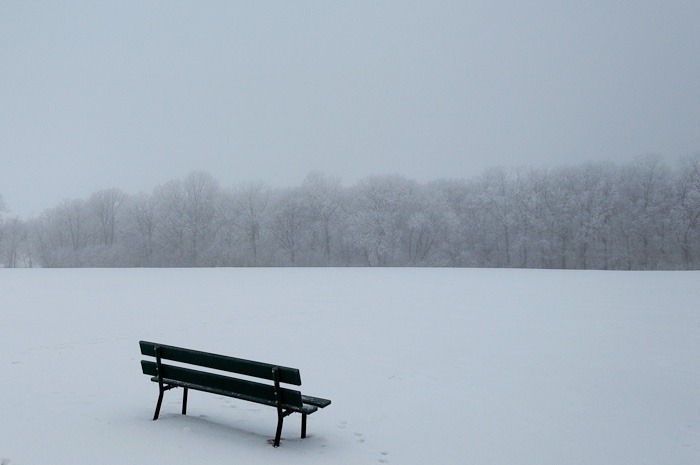 Now that was a new experience for me. Usually, it is supposed to be very cold. So cold that fog doesn’t even have a chance. But this winter seems

to be really different from all others.

Fog is usually not the best moment to go out and drive, or go out and run for your health. But for taking photographs, it’s a completely different story. Pictures will look fuzzy without being out of focus and lack colour without being transformed into Black & White. 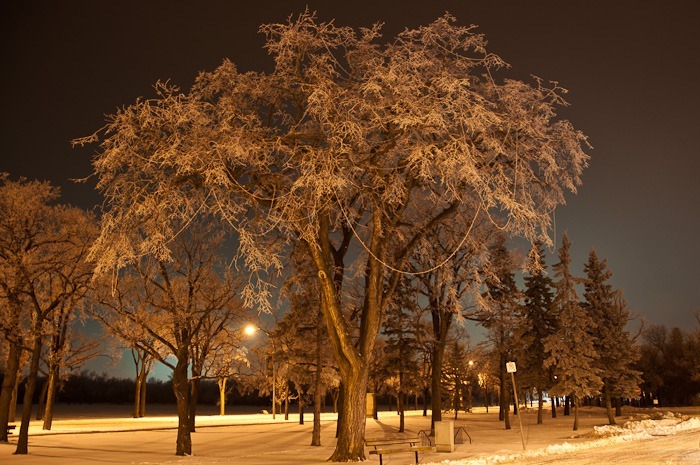 Having this fog in mid winter in Winnipeg adds temperature effects to it as well and the results are quite spectacular. On some days I have to get up early in the morning and be outside around 6AM. The sun is nowhere to be seen yet, all light is still sodium or mercury saturated. 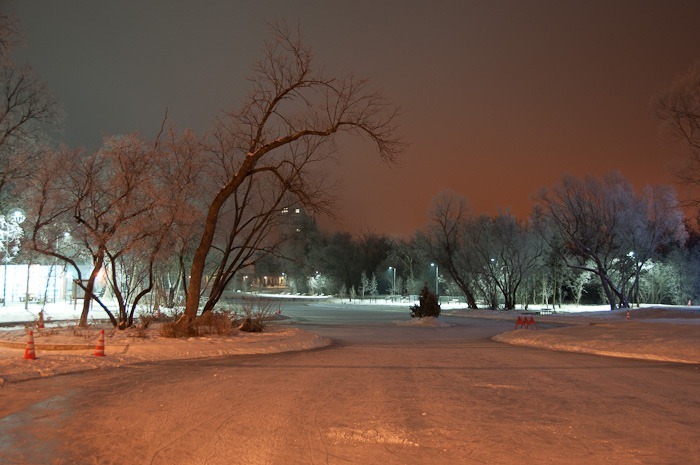 The Duck Pond in the Assiniboine Park around the same time shows no signs of sportsmen or sportswomen yet. The city lights colour the sky a deep orange. If you don’t know about light pollution of this colour you could be really alarmed with a sky like that. 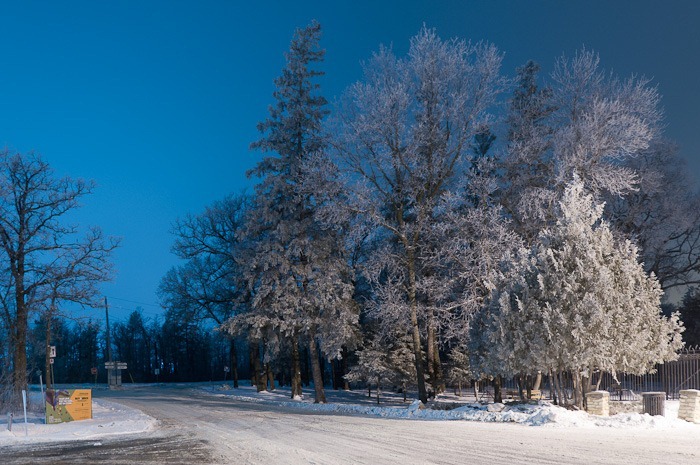 Sometimes it is an interesting idea to reverse the effects of the sodium lights and try to obtain a natural colour for the snow and the sky. The above picture was taken around 6:15AM, and without the orange colour cast, the sky already looks blue. The white balance is easy to take: snow should be white, right? 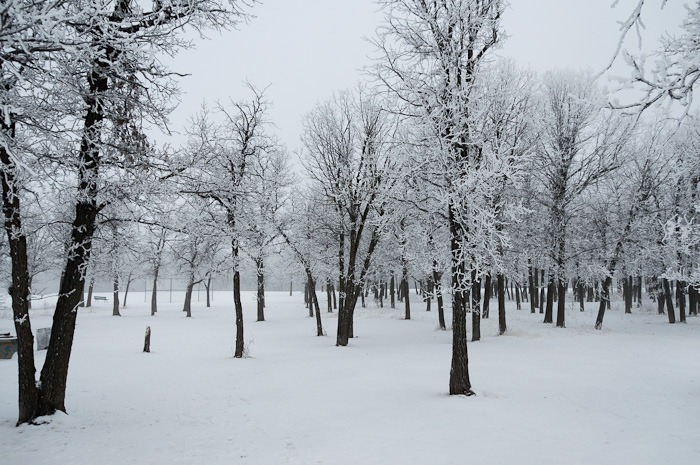 But I was talking about fog, and am showing nothing of it. Well, in fact I am showing the results of a night of freezing fog on trees. This is called hoarfrost, it stays only during the early morning hours until the sun burns it away. 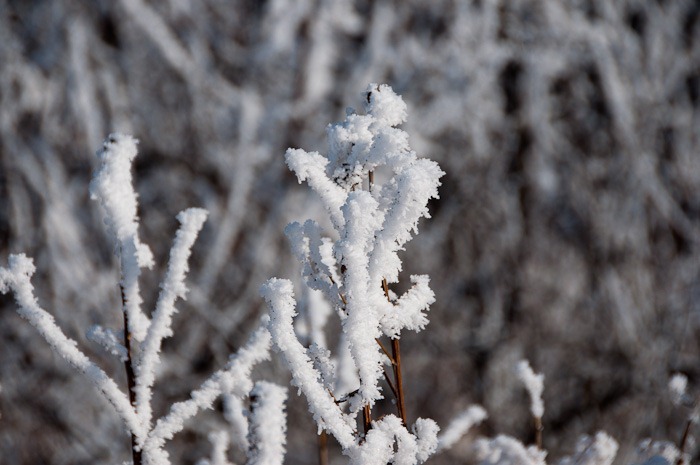 Only this week, the sun didn’t show up for the first few days and so the hoarfrost was a real pleasure to photograph. The fog remained and it only added hoarfrost to the trees and grass. I have rarely, if ever, seen hoarfrost this thick. The last time I saw trees whitened this way was when they were on sale as Christmas trees. And that frosting was not real. 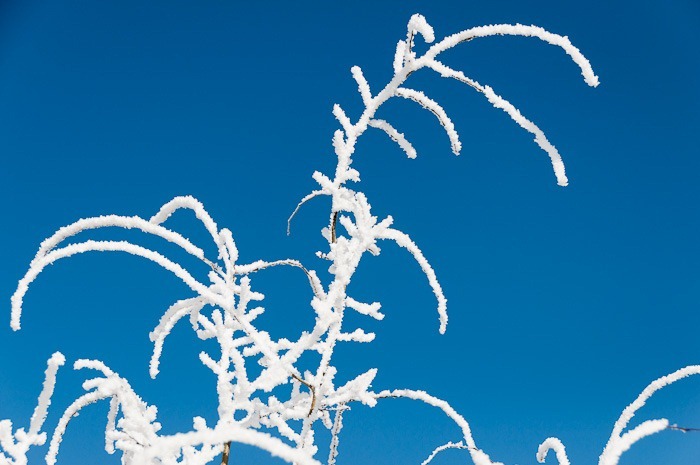 Against the now blue sky, the hoarfrost really shows its beauty. I could take pictures of all the trees in the city and in all the parks, I wouldn’t get enough of that. But it would make for a really dull collection of pictures, at least that would be my opinion in a few months.

So, today I decided to go out again early in the morning, and left for Birds Hill Park, about 20km north-east of Winnipeg. That park is huge, and you could even get lost in there. 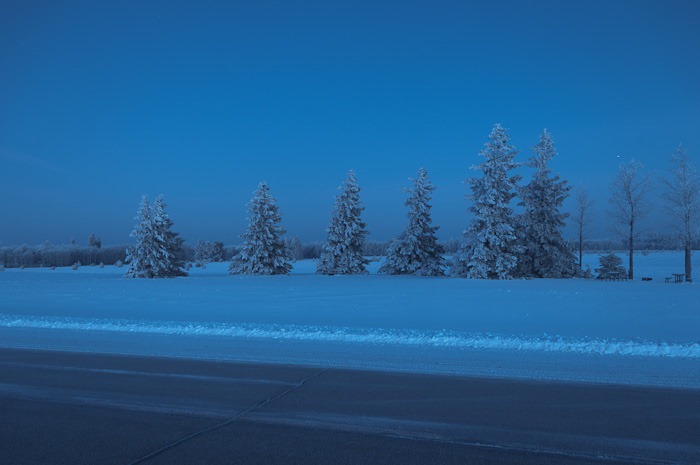 Side of the road shot

I arrived around 7AM, meaning that the sun would still take another hour before it would show its face. This period in the day is called the “blue hour”. I have never given it a lot of thought, never being out that early. The shot above was taken on a tripod, with a 30 second exposure. The quantity of blue in this picture is amazing. 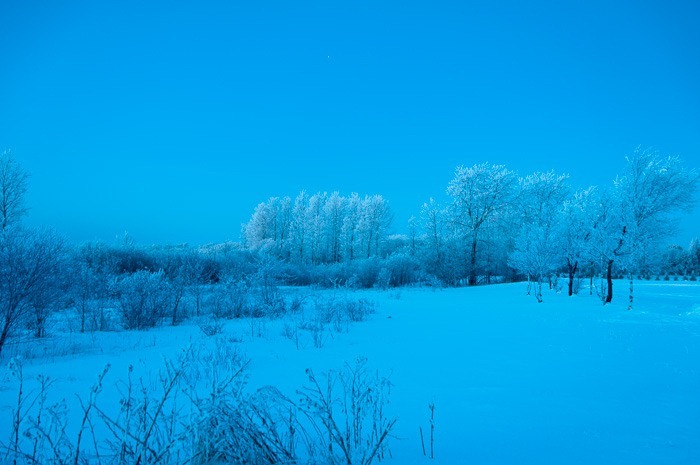 So, I decided to take more pictures and see what would happen during sunrise. Little by little, the huge quantity of blue diminished. 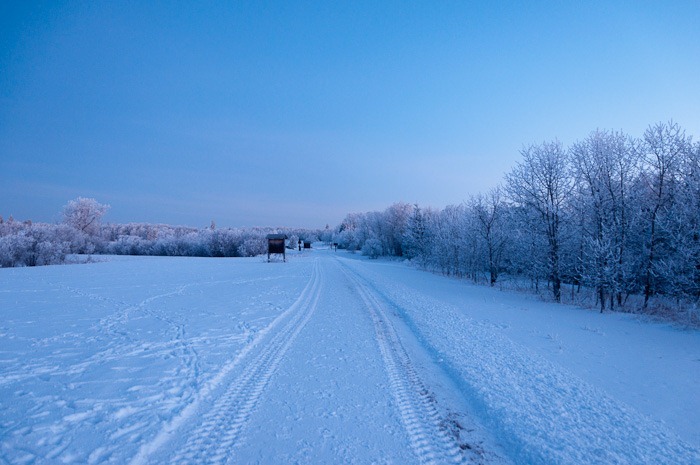 However, just before sunrise, the temperatures also drop significantly. From the reasonable –9C it dropped to –13C. With only a simple pair of jeans, this soon became a cold business. A brisk walk imposed itself, meaning I had to take my tripod with me if I wanted to take some more pictures. 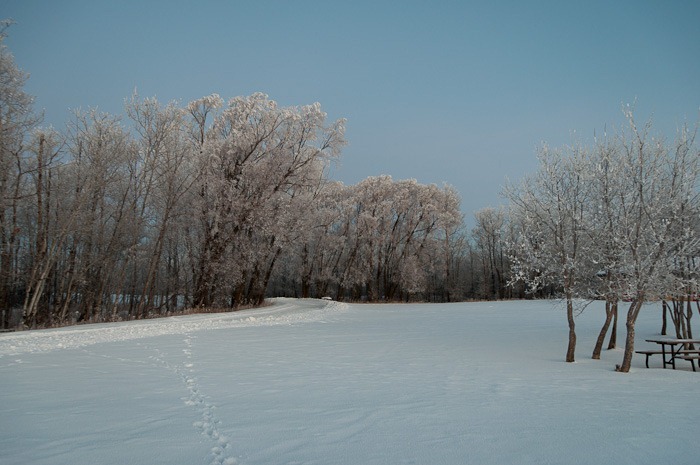 Being the first in the morning

Soon, the sun was approaching the horizon and most of the blue colour was gone. From that moment on, the sun was gaining strength and lit up all the trees covered in hoarfrost. 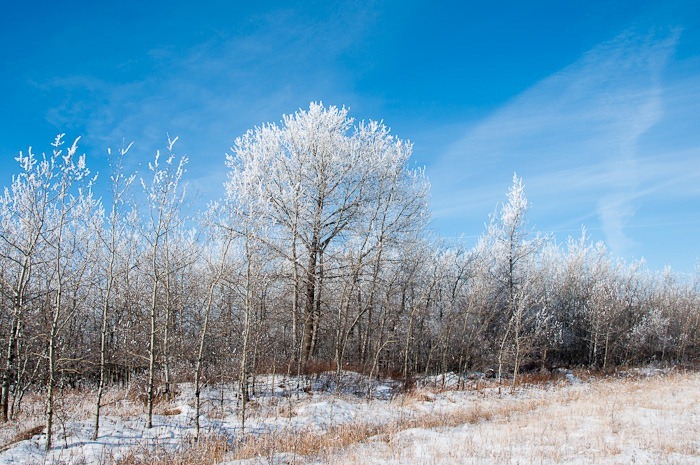 Aspen covered in frost against a blue sky… What more can you wish for a winter picture?

Well perhaps some prairie grass covered in frost? Ok, I can go on and on with beautiful pictures of frost, cold and blue sky. My point here is that whenever there is hoarfrost outside, I should try to get out of bed early and get some great pictures. Not all will be calendar-like material, but the walk in the frisky morning is also a very good thing for my health. 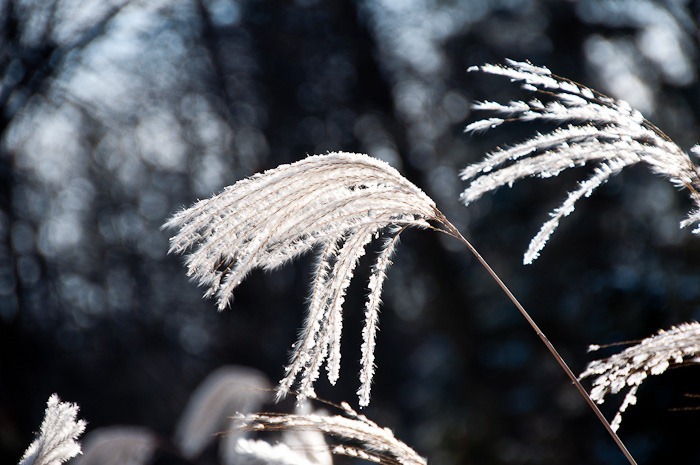 I may do this again, and try to get some different pictures.