We all have them, we all make them and we all break them. Somewhere in the first week or two of the new year. 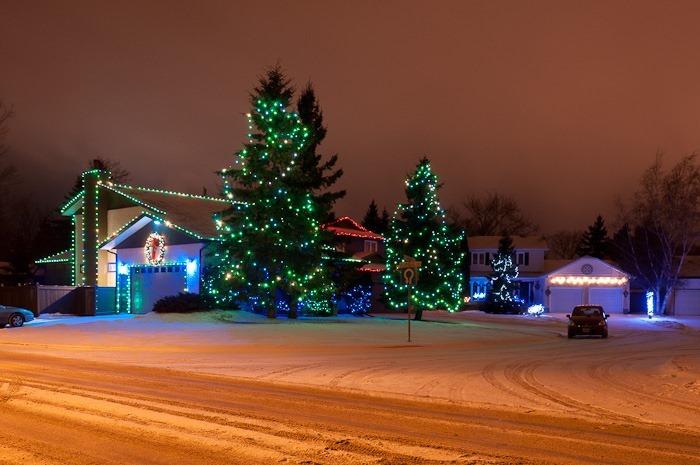 So… now that I have overcome my own good intentions, we can go back to photography

. Let’s see what we have for New Year…

Since I didn’t go for the Fireworks this year, I have no pictures of them. I guess that standing in the cold taking pictures with mittens was not the best idea. A few days later, however, I was near the Esplanade Riel, and I just had to take a picture, or two. 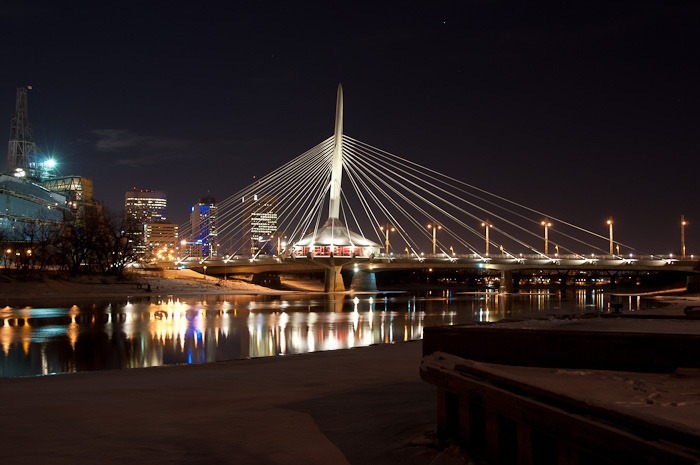 It’s quite an unusual sight, the bridge, snow and open water. More if you think that this picture was taken in January. The river should have been frozen shut. 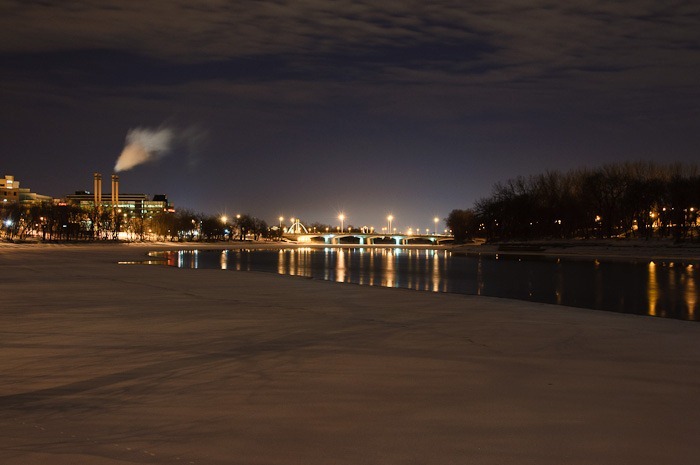 And just when you think that you have taken all you wanted, you turn around and see Main Street Bridge. So that was another picture to keep. After that, I started to be pretty cold, even if the temperature was a mere –7C. As you can see by that smoking chimney, there was a bit of wind. The wind chill (only for humans) was down to –16C that morning.

It looks like taking night shots is more a winter-type of activity than a summer-type. Probably because the night lingers way into the morning and I don’t have to get up so early to get a good shot 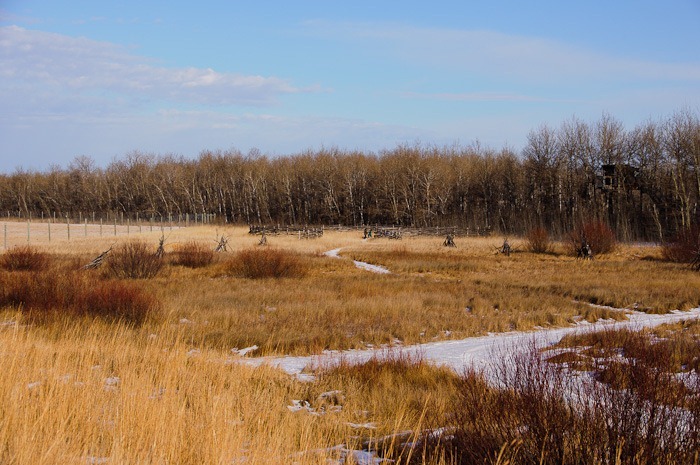 A few days later, I went to Fort Whyte Alive, during lunch hour, of course. As you can see, there is not much snow on the ground, and I was sweating in my light jacket. Not that I had been running a mile or so, nothing like that. 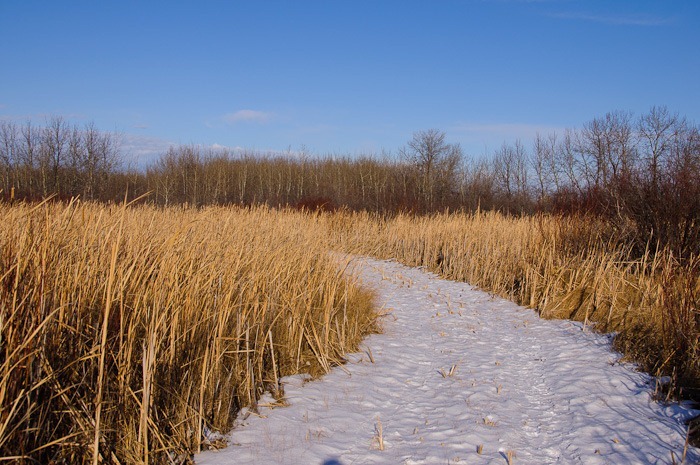 Not much snow, for now

It’s just that winter, this year, has no intention of showing up. At least not until now. Usually, this field is totally blocked off by the snow during winter time. At least for us humans. The White Tailed Deer on the other hand love this place.

I have never really understood why they were called White Tailed Deer. Until I scared one of them by walking too close. It jumped up and showed me… 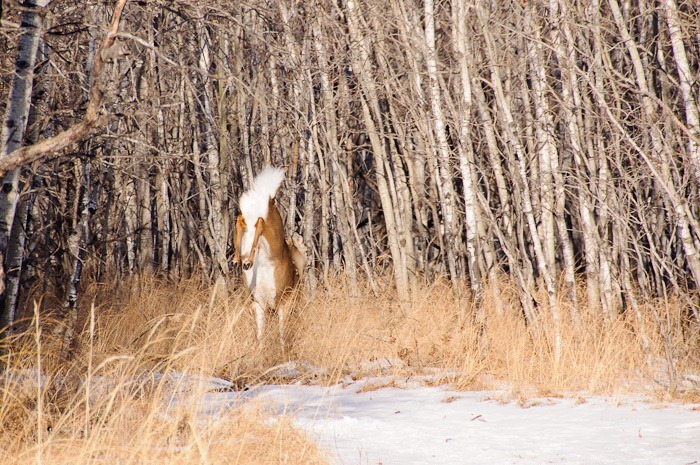 As usual, the Chickadees were feeding wherever they could. But with so much food away from people, my handful of sunflower seeds couldn’t attract them. They preferred the calm of the feeder. 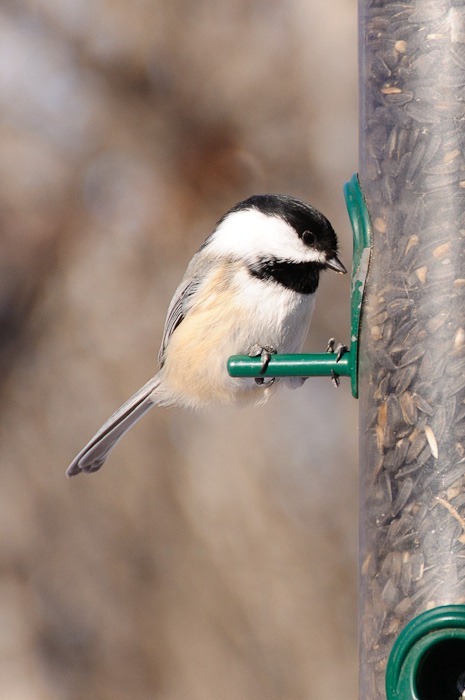 No stress and food galore. This one seemed to be still a youngster, the bill is very light, not black or dark like most other Chickadees I have seen. 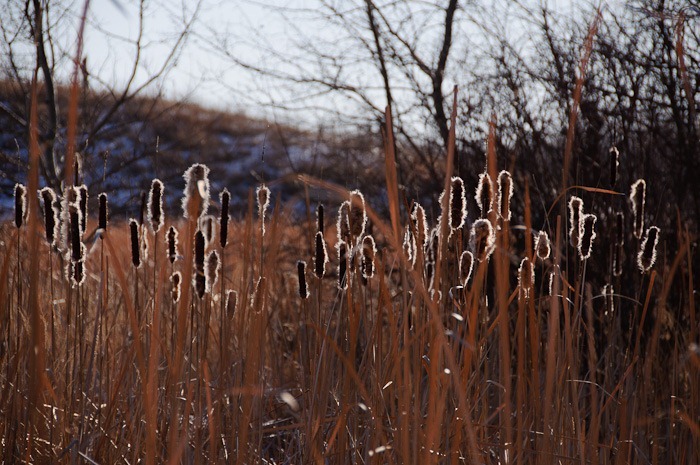 Bull rushes against the light

Then, on my way back, without rushing, I found these cattails or bull rushes. Against the sun, it looks like I took them in the evening hours, but back light was all it was.

And so ended my lunch on the second day of the year. Along with my good intentions and resolutions.

Now I have to go back to the gym…