When talking about The Forks in Winnipeg, one always imagines the Forks Market. And a dirty old train yard being at its origin. 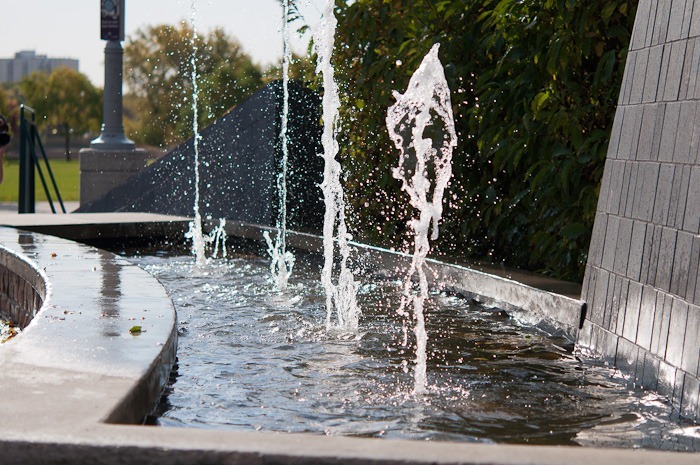 Little is ever said about the origins of The Forks. Origins that go back at least 15,000 years. Now this is how the original inhabitants talk about these origins…

First off, I have to tell you that The Forks, even if it looks a great place to live, is a floodable area. Nobody is supposed to live there or even stay there for an extended period of time. It has been like that for thousands of years. No First Nations lived here on a permanent basis. All of the pictures in this post have been taken in and around The Forks.

This is a story about the origin of The Forks and its surroundings.

Many, many thousands of years ago, the world was full of animals, plants and people. Not many people, but all the more animals and plants. But none of them had a name, and that had to change. Wanabozho was designated to name everything. 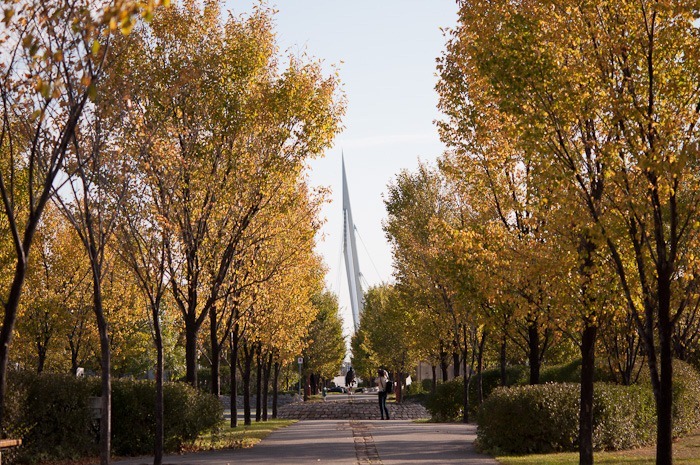 The trees, the plants, the animals, everything had to have a name. But that was a tough task to do alone, so Wanabozho asked the Creator: “Can you help me out, because this is going to be lonely and long!”. The Creator answered: “Alright, I’ll give you a friend, a companion, one that will go with you, and be faithful to you wherever you have to go.” The friend was the wolf. 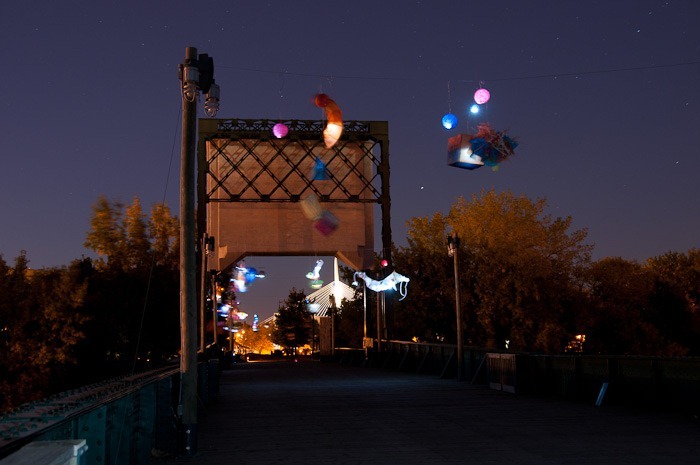 The Footbridge, decorated with lanterns

So the wolf and Wanabozho went around the world naming everything, all the trees all the animals, everything. “What do you call that? - We’ll call that one a loon”. And so on, all over the world. One time, Wanabozho wanted to build a fire because was getting quite late and cold.

But Wolf wanted to hang out for a little while longer. So Wanabozho tells the wolf: “Don’t cross the lake, even though it’s ice, don’t go there. Because the Manitou is there and he’s mad at me and he might want to take away your life.” But it had gotten very late and the wolf said: “If I run very fast, the Manitou won’t even know I’m there.” So he decides to just do it. So he ran off, very fast. But he didn’t make it. 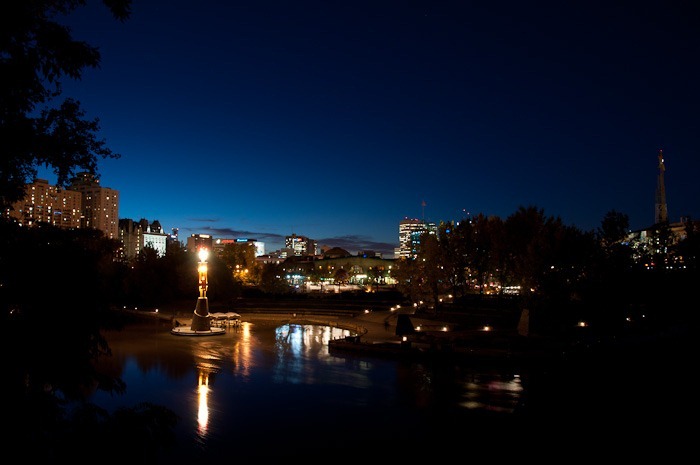 The end of the Assiniboine River 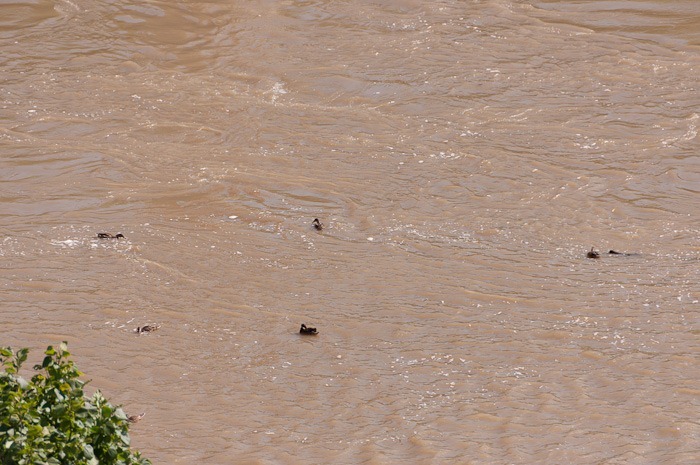 Flooded, for the most part

And they flooded the earth. So all the animals were swimming for their lives and all were taking turns on the backs of the great white bears. Wanabozho realises that they’re all not going to make it.

He said: “If we could just get back that earth, that land, we’ll do ceremonies, we’ll make new land and between those lands my dear white bear, you can swim.” So they asked the great white bear to swim as far as he could to find that lost land. 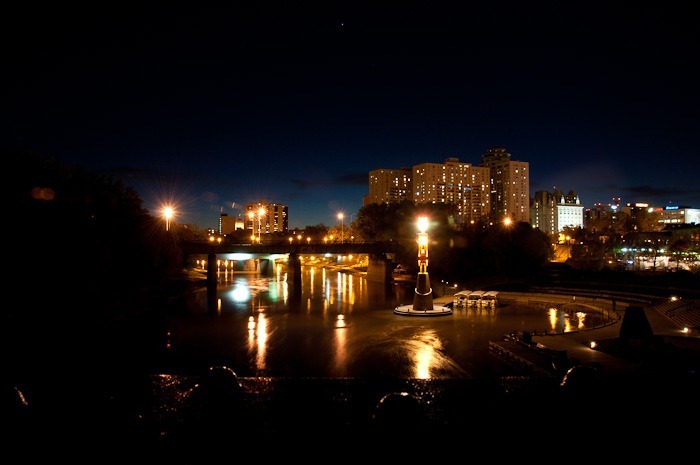 The great white bear swam and swam, came back and said: “It’s too far, I don’t think any animal’s gonna make it!” They all took turns with this, many of them almost did make it, most drowned.

Then Muskrat swam, and was there the longest, even too long, everyone was thinking he must have drowned too. But then they saw a shadowy shape coming back, floating and when they got to it and saw it was the muskrat, belly up, so they were very sad. But when Wanabozho opened a paw, because it was clenching something, they found the earth, the paw was clenching earth! 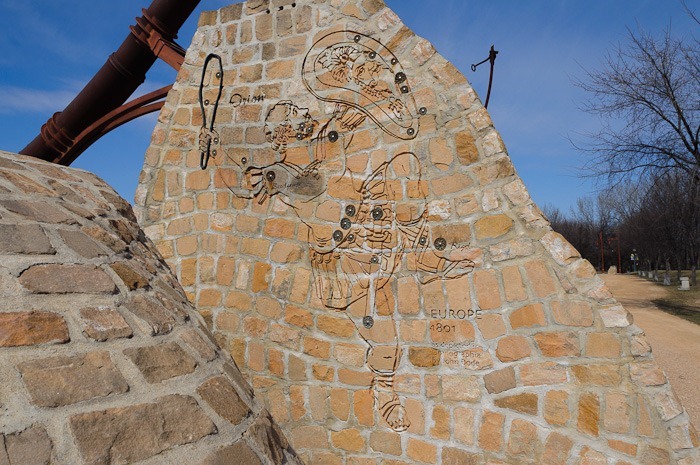 Mystery at Oodena, The Forks

They were all happy, Muskrat made it! He did it, He found earth! And Wanabozho took that earth and said, “Who among you would sacrifice their life too so that we all can live?”

And it was Turtle that came forward, saying, “Put it on my shell!” So, Wanabozho put the earth on the shell and asked for all the sacred elements to breathe life into it, the air, the fire, the earth and the four winds and it started forming land. 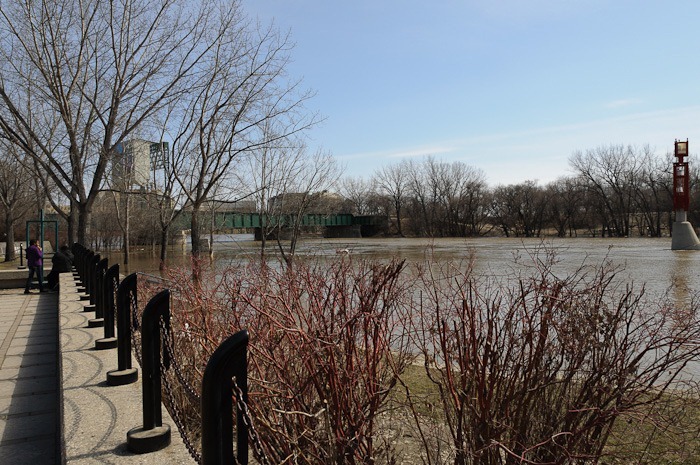 Green is coming back

And they call the Forks, the Heart of Turtle Island. 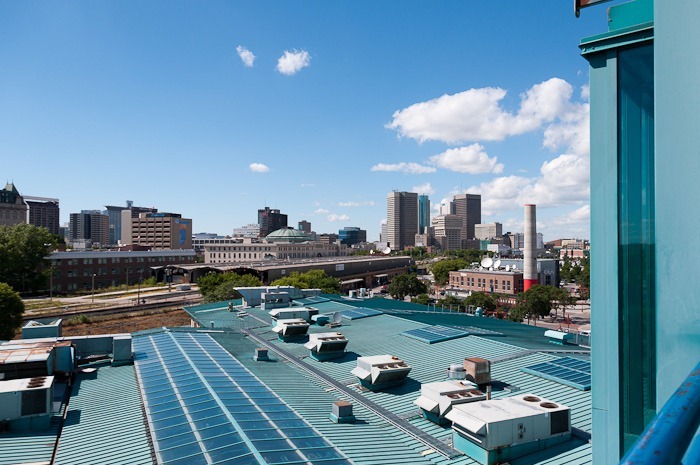 Top of The Forks Market

Today, The Forks are still not inhabitable. The land is still floodable and is still very much impregnated with the water spirits. If you are sensitive enough, you will feel something there. Otherwise, just go there and enjoy the place on a sunny afternoon.

This story was told to me by Allen Sutherland, a master story teller of First Nations History.