I saw the lights. The Northern Lights. They were here, albeit it through a light veil of clouds. It’s always a pleasure to observe this Arctic phenomenon without freezing your extremities.

It all started with a crazy sunset. So we went out to Birds Hill Park and observed. At first, the sunset seemed rather classic, but

soon, it became clear that this sunset was a bit different. 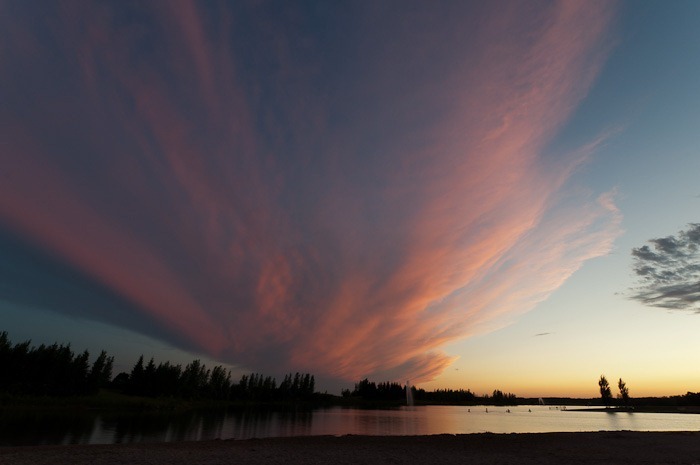 The sun had been spewing material into space for the last few days and it looked like we were getting cooked alive. In the end we survived this rather spectacular sunset. 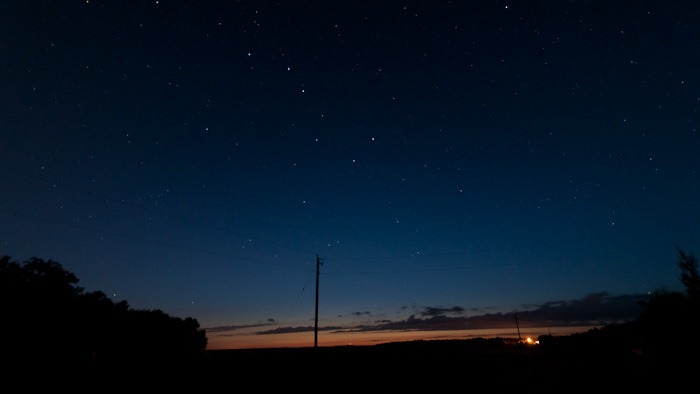 What was left was the stars, the mosquitoes and us. We were largely outnumbered by the mosquitoes that were a real nuisance. Not so much that they were biting, but breathing quietly through the nose was not a very good option. In the end I decided to spray myself with some radical anti-mosquito stuff and they held off for a little while. 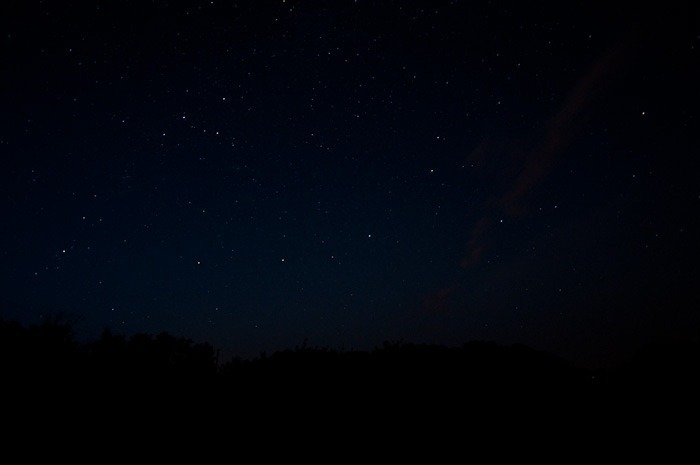 I had to take care not to spray the inside of my hands, since this stuff has a habit of attacking plastic. My camera has a plastic outside, even if the inside is metal.

As you can see from the first few pictures, there is no sign of an aurora borealis.

The sun, however, continued to cast away material, and the next “attack” was one directly pointed at Earth.

But material travels at a lower speed than light and we had to wait another 56 hours until that stuff reached the upper atmosphere of our planet. More about how an Aurora “works” can be found here.

So we headed out again, two nights later to see if we could catch some Lights. 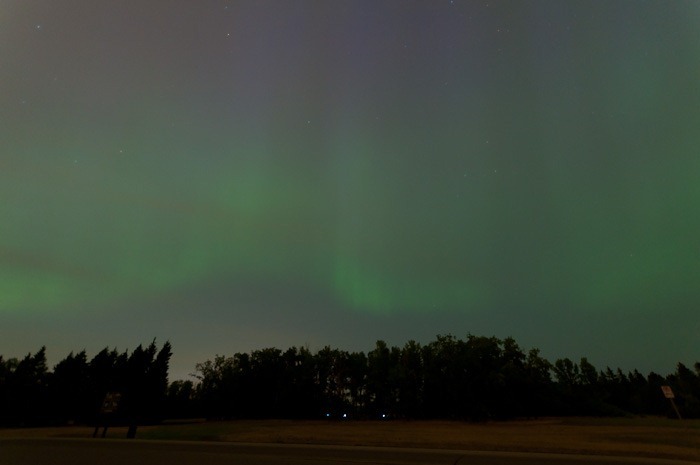 At first we went again to Birds Hill Park, a fairly dark place to observe the sky not too far away from the city. The lights were visible overhead, helped by a Planetary k-index of 8. Nine on that scale is the maximum ever recorded and taken into account.

To make sure that we got some darker skies, we moved further north, near the end of the paved section of route 302. 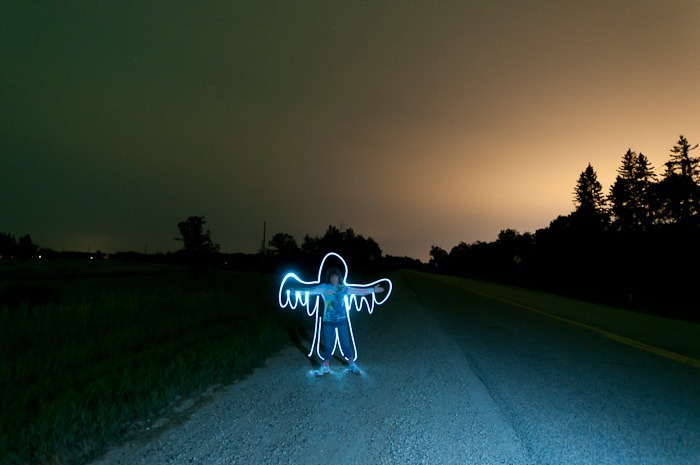 Light painting while waiting for the light

Now we had to wait a bit for the lights to appear again. You may not know this, but Northern Lights come and go as they please. Even on a stormy night like this one, there are calm periods and no lights will show. We passed the time having some fun with light painting. The orange glow comes from the lights of Selkirk. You can also see some greenish light; Northern Light diffused by a light cloud cover. 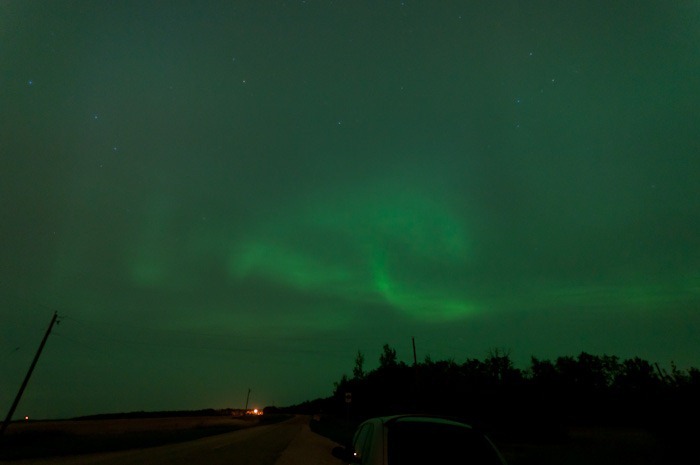 After that it was show time. Even through the cloud cover the lights were visible. They were dancing (not singing) high above the clouds. 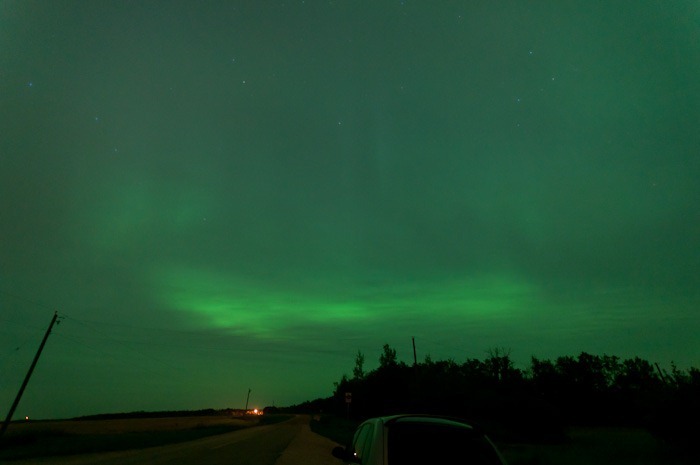 As usual I had some trouble focussing my camera, auto-focus has a habit of not working in the dark. Therefore I tried to use something I could light up for a moment. I focussed on my car here. It’s no use trying to focus on the Lights themselves, they are too diffuse and way too far away. 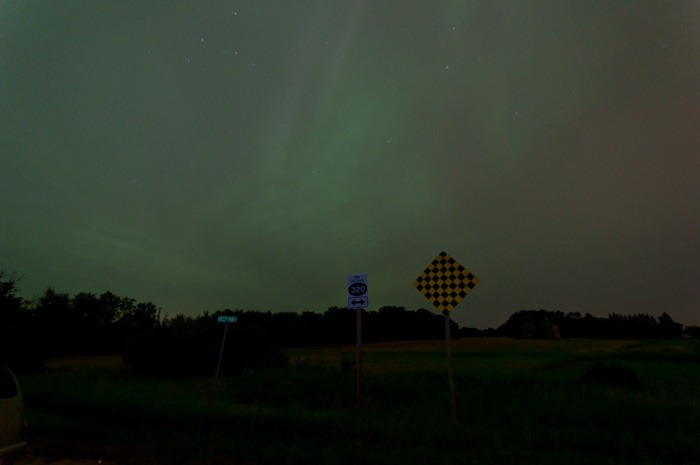 After a while we noticed that even if the lights were still there, the cloud cover was becoming thicker. This was the last picture. Then I heard some growling noises in the bushes across the road. Since it was not me or my daughter making those noises, I decided it was better to leave the place to the growling creature.

The result was a few nice pictures I can call Keepers from two nights out in one week.