Winnipeg is in the center of the continent, for those who didn’t know. It is also fairly close to the US border on the south. Going for a trip in Manitoba mostly will mean going north. 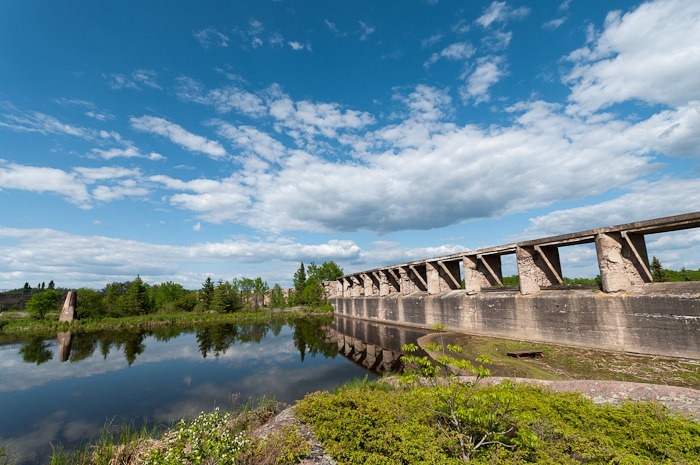 North is the Interlake region, between Lake Manitoba and Lake Winnipeg. Since lake Manitoba is currently overflowing, we thought it a better idea to go a little east. The views on that side of the lakes can be breathtaking. Take a look inside…

For the European readers of this blog, the lead photo is not an ancient Roman Empire ruin. This is very recent history. The wall you see it the old spillway of the Pinawa Power Dam, built in 1906 and retired in 1954 in favour of a newer, better power station a few kilometers away. 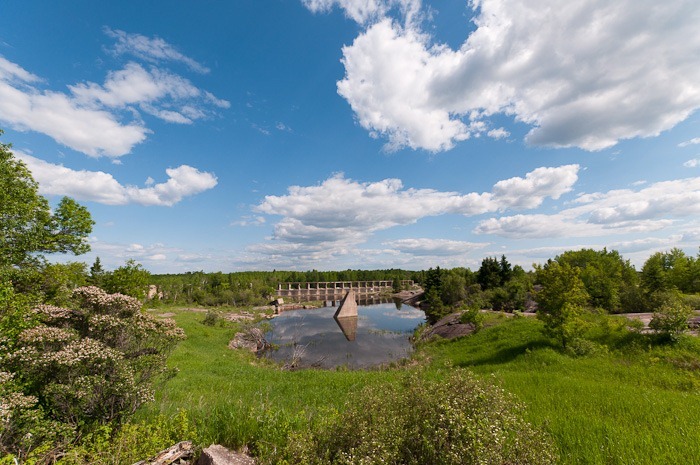 View on the former artificial lake

Today, the Pinawa Park is accessible to the public and you can go anywhere you want. As long as you don’t go to the dangerous places, like on top of the spillway ruins.

The dam itself is still there, but the water is now released under the spillway, thus creating a nice fast flowing stream on the other side and a small lake on the upper side of the dam. 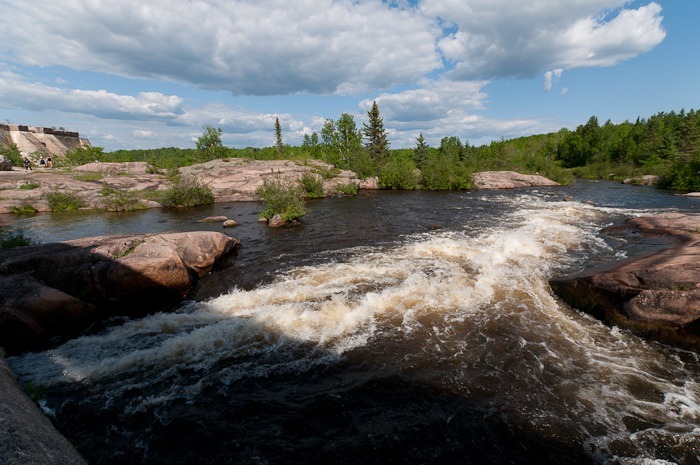 Water flow beneath the spillway

The Pinawa Station provided power for Winnipeg for nearly 50 years and was the first in its kind being built in the harsh Manitoba climate. 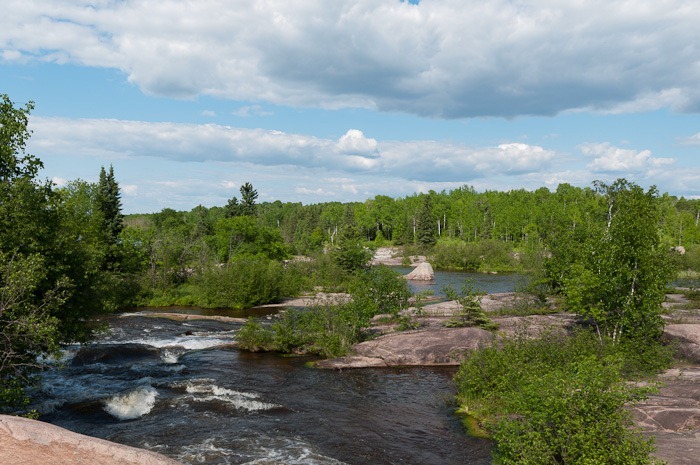 Now, the stream provides great views for nature lovers as well as enjoyment for swimmers and divers. Nothing in the above picture would even hint at the busy environment it was a mere hundred years ago. 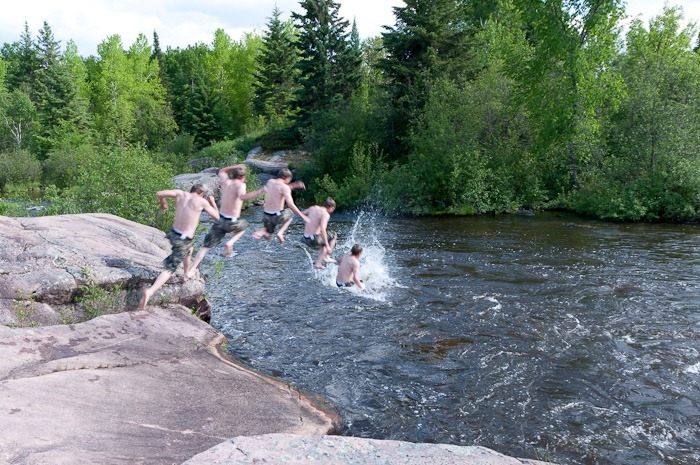 For once I wanted to do a little composite image using Photoshop, not bad, eh?

A little closer to Lake Winnipeg there are other places with other interesting views. Selkirk, only a few kilometers north of Winnipeg has its own airfield. Well, I wouldn’t say it’s a field, but airplanes do come down to earth here. 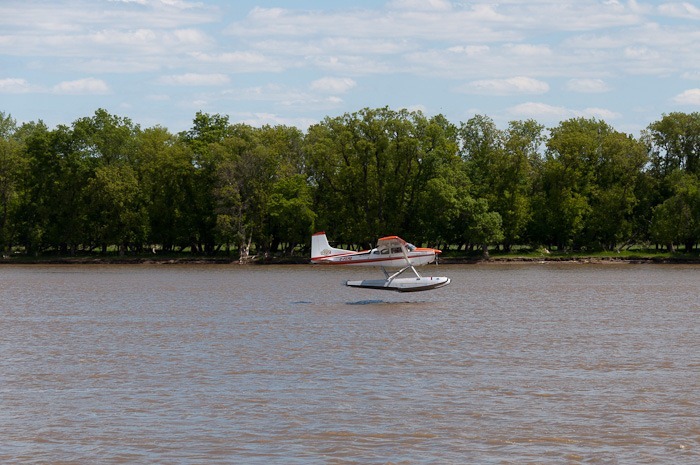 Getting down to earth

This is the same spot as where we went ice-fishing a little more than a year ago. Some people will ask themselves when the ice is gone here. It’s gone by April, even if it can stay fairly chilly for a few more weeks. After that, the airport is open for business.

On the shores of lake Winnipeg there is (or should I say WAS) a place called Grand Beach. Grand Beach is classified as one of the most beautiful beaches in North America, but nowadays there is nothing much left. 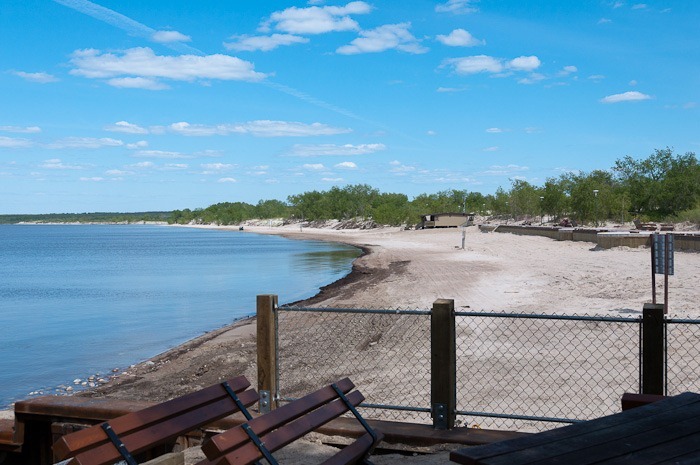 Grand Beach, empty of visitors. Would that be Grand No Beach?

The boardwalk that was there a few weeks ago has been carried away by the water, whipped up high by one of the most violent storms of the last one hundred years. Now the place is closed to the public and repairs are on their way. 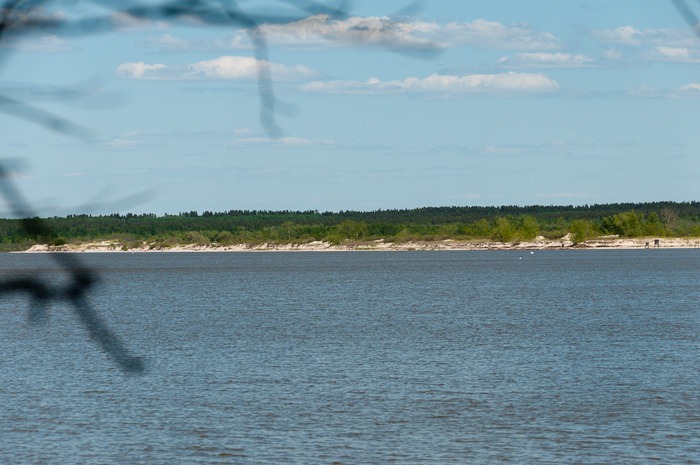 From far away the beach looks normal, for a cold day. But if you could see closer, you would see that there are no bathers on the beach, no children playing and no dogs fetching sticks from the water. 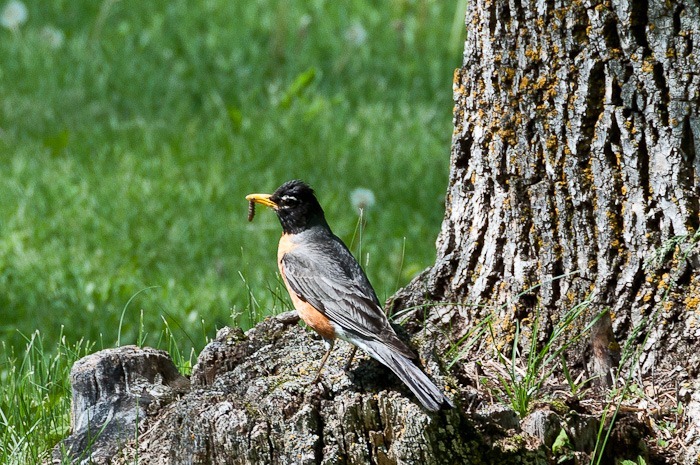 After looking at the deserted beach we went for a little walk. Birds are all over the place, but I had never seen this one before. I’ll have to ask some knowledgeable people what this bird is called… 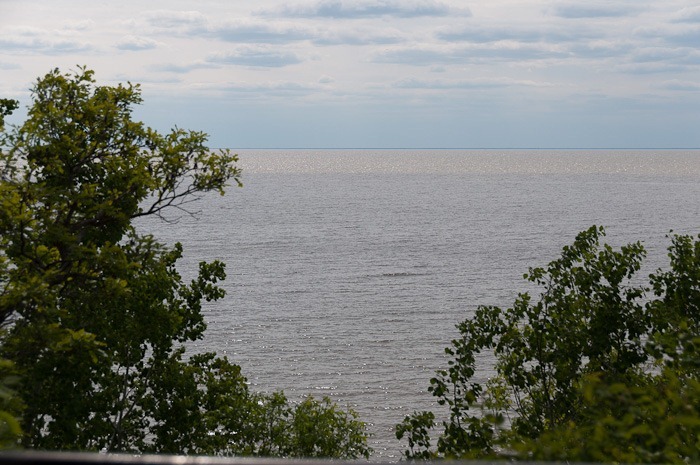 The other side, without details

Lake Winnipeg is not very wide near Grand Beach. Seeing the other side is fairly easy, distinguishing elements there is not so easy. This is also the moment where the frame on your camera’s display comes in handy to hold the camera straight… 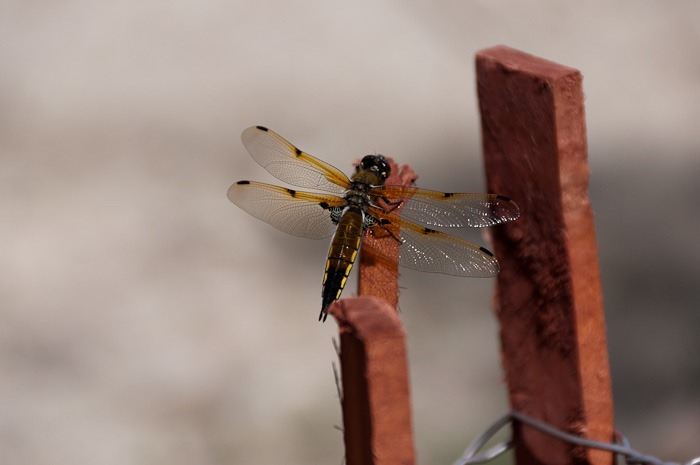 While we were warned against flying dangers like mosquitoes, there were none yet. I guess it’s still too early in summer to have them around. However, the future predators of the mosquitoes are already present in big numbers. Man’s best friends I would call them. This one was kind enough to keep still for the time of taking the picture. 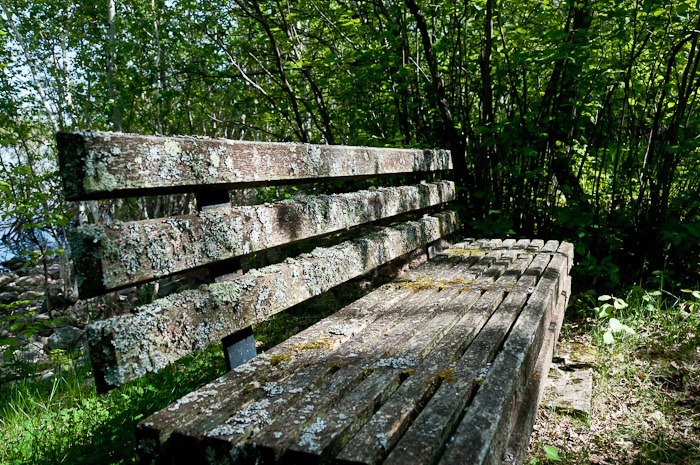 Close to the water, old wood will always attract fungi and moss of all kinds. This bench looked really nice to me, photographically. To sit on, perhaps not so attractive.

Anyway, we were not there to go and sit on benches, we wanted to see things. And that’s what we got. Lots of things to see, fresh air, a warm breeze and sunshine. What else do you need? Could have done with a nice fresh beer, but then driving back home might become tricky.