Last weekend there were “Jane’s walks” all over North America in honour of Jane Jacobs. Whenever there is a good reason to go out and learn something about the city or environment I live in, I’m game. 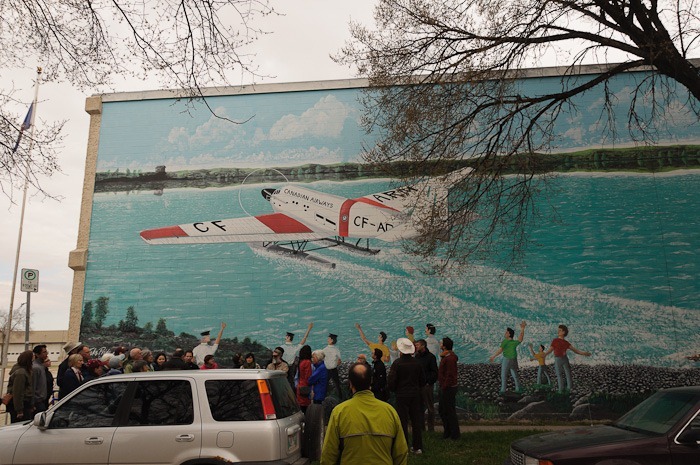 This weekend the Jane’s Walks were on the menu in Winnipeg as well. Lots of things to learn, lots of stories to listen to, told by professionals of all kinds. Come on in and see…

First off, who was Jane Jacobs? Jane Jacobs was an urban thinker, activist for community oriented cities. More about her here.

Every year since 2007 walks are held in cities in order to show and tell more about the communities, sidewalks and the parks. Although Jane Jacobs was not a fan of the traditional parks, she did give them a good place in a city. As long as they contributed to the life of a neighbourhood. 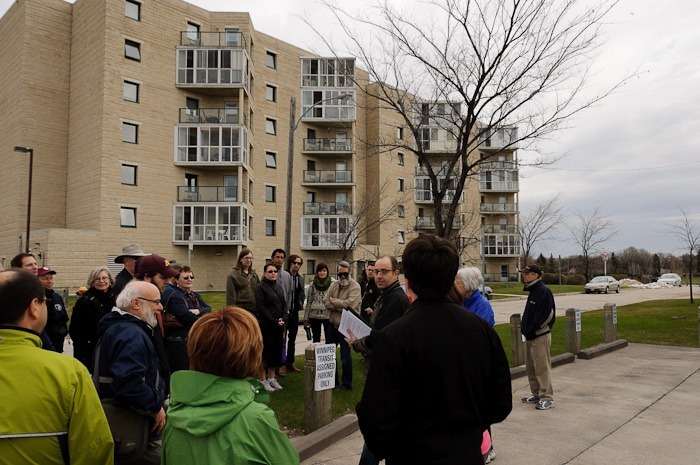 How the building was designed

To understand a neighbourhood, you need to know it’s past. Some of them have a patrician past, others were mostly working class neighbourhoods. 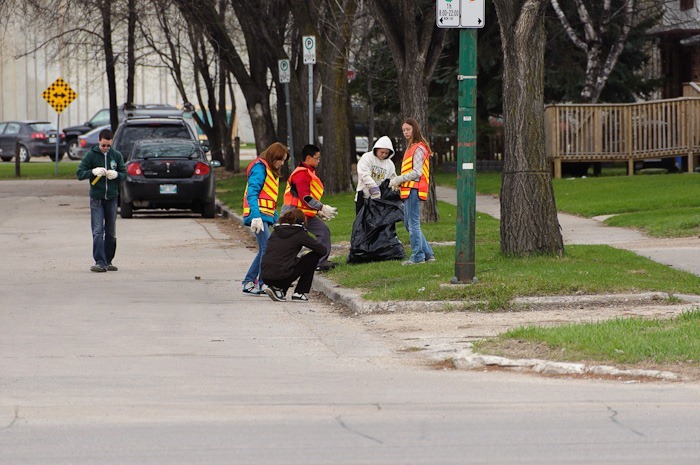 Being fairly new to Winnipeg, it’s a pleasure to hear about the older neighbourhoods and to know what went on there a few decades ago.

My first walk was on Saturday morning lead by Mr Jino Distasio, son of an Italian immigrant in the neighbourhood of Riverview. He has lived there for decades and had a lot of stories to tell. 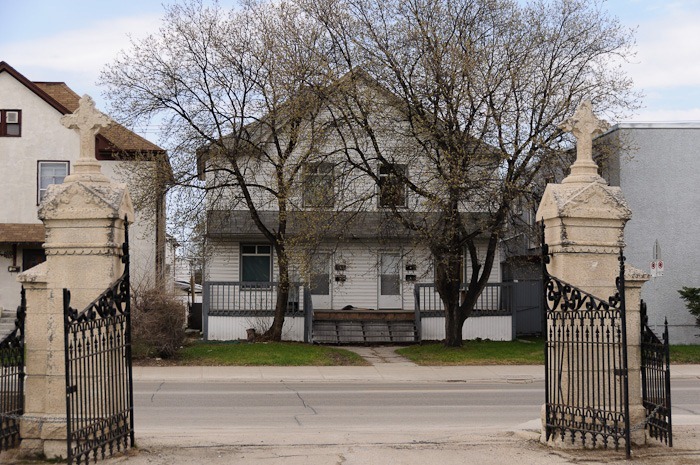 Outlook over a quiet place

The big history of the Riverview neighbourhood were the hospitals, their ways in and their ways out. The hospitals were for the infectious diseases, so were nicely tucked away, far from the main road with the busy streetcars and traffic. 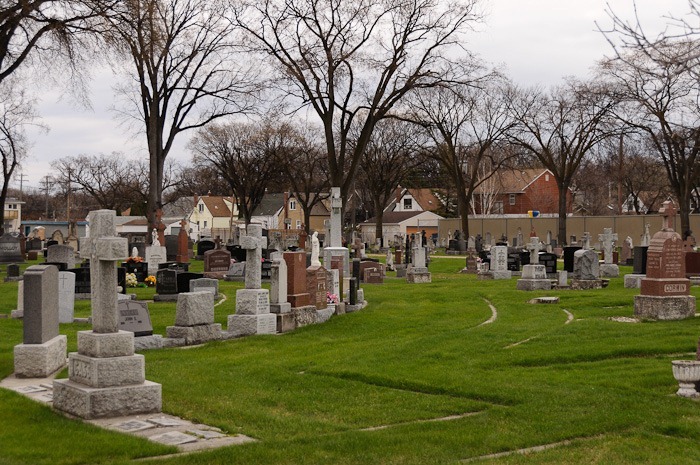 The last place to be

The way out was often calm and uneventful. But anyway, it was in the center of the neighbourhood.

The main story of the neighbourhood was that of the streetcars. The electrical streetcars that have long since disappeared for the benefit of the bus. All activity was centered around the stops of the streetcars where businesses flourished. Slightly off the main road (but not too far away) were the houses of the wealthier people. The farther away, the smaller and less wealthy the people.

My second walk was in Winnipeg Downtown.

The Waddell Fountain in Central Park, yep we have a Central Park in Winnipeg too, has been restored after decades of degradation and mistreatment. 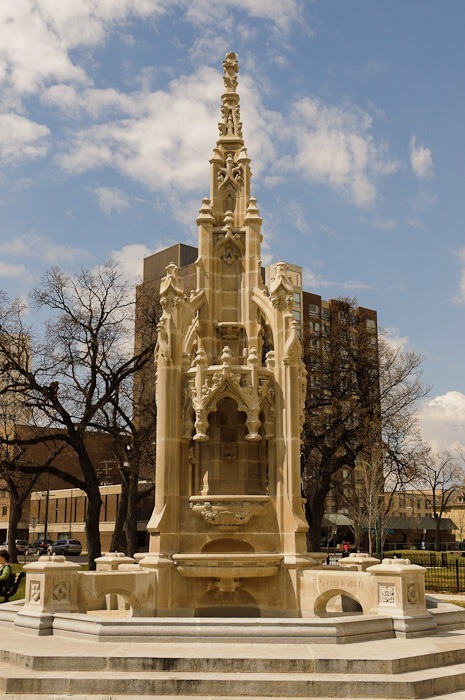 From close up it looks like a miniature cathedral, built on the likeness of a Scottish church. The story goes that Mrs. Waddell decided that if her husband was to remarry after her death, he would have to donate a certain amount of money towards the building of a fountain. The original fountain cost around 10,000 dollars, at the time.

The fountain has been rebuilt and improved, nearly a 100 years after its completion for a mere 600,000 dollars. 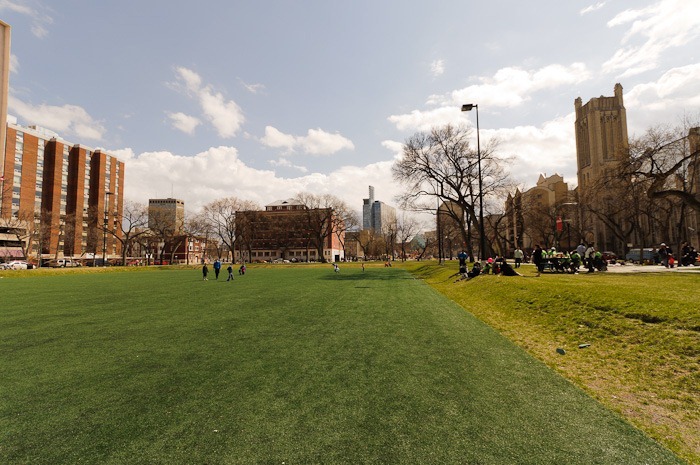 Central Park also got a complete makeover and is now a place where people come and talk instead of dealing illegal substances. It is now a safe place to be, unlike a few years ago. Jane Jacobs would have been happy to learn this. 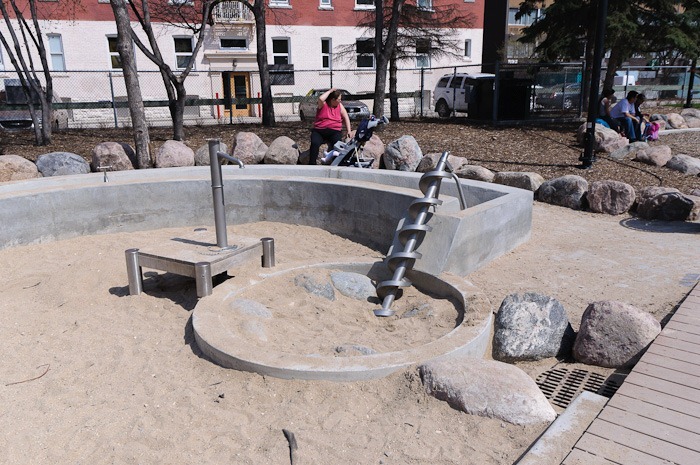 The kids can now play in the park, a special place has been made for them. The “dirty” place was still clean enough to take a picture without risking a mud attack

. The above place is to be filled with water so kids can play “Waterworks” like I used to do in the ditches in Holland when I was a kid. I guess the water here will be cleaner though… 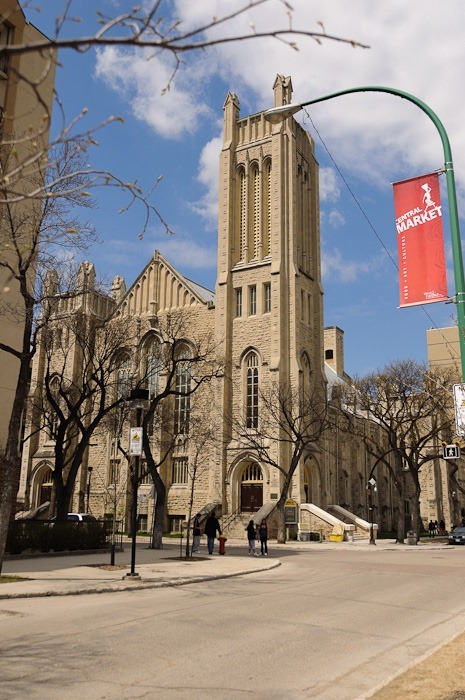 Central Park was created near Knox Church. If you take a good look you can see that there is a piece missing on the top, thanks to a violent thunderstorm. Why talk about the church? Well, Knox Church is the central place of the neighbourhood, many activities and initiatives originate from there.

On Sunday, the walk I had chosen was a lot different, more about that one a little later…