Some people have adventures every week. Others have to save up their time and energy to have some adventure. Lately, our working schedules haven’t coincided a lot, but last weekend they did. 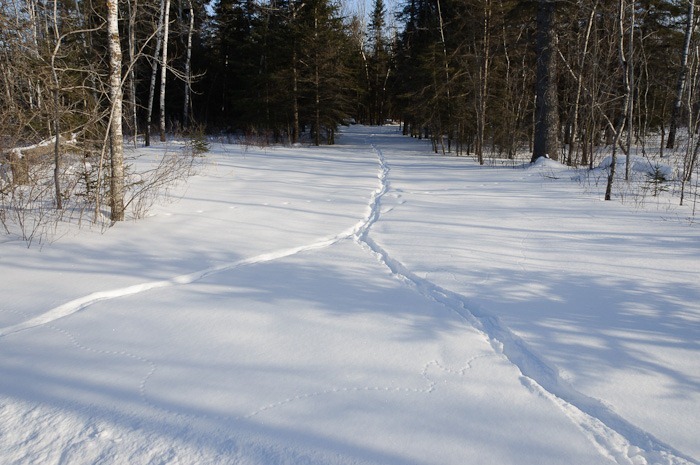 So we ended up in a lodge on the shores of Lake Winnipeg. The place was already well known to us. But not the activities we had in mind… Come on in and see.

I have watched and admired the skiers in the latest Olympic Winter Games in Vancouver 2010. Like many other people I guess. This weekend it was my turn to step on the Cross Country skis and show what I could do with them. Ahem, show? I spent part of my time upside down in the snow. Snow that was surprisingly soft, next to the groomed ski trail. 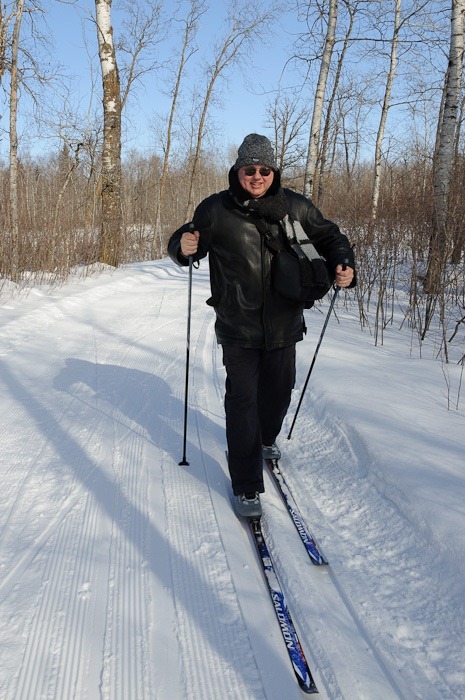 There were two groomed trails where we stayed; a shorter one of about 1km and a longer one of about 4km. We decided to take the short one for starters.

After a few hundred meters after the above picture was taken by my wife, my face looked a lot redder from all the snow in mouth, nose, ears and eyes. Funny that a touque does not protect in the event of a fall. The first thing it does is hang itself in some branches, just out of reach. 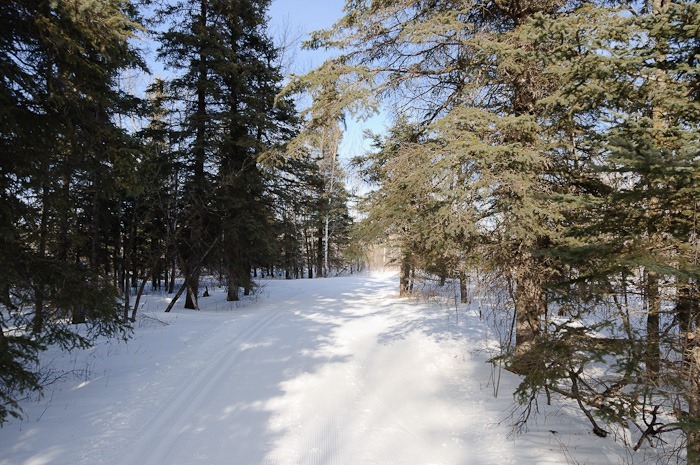 After that I thought it would be a better idea to have my wife carry the camera bag, my camera was nearly smashed, along with my budding confidence . So I decided to be calm and quiet. Too quiet for the likes of my skis that were on the run before I noticed.

Back to sneezing snow.

Better to show some pictures of the weekend, my skiing performance is definitely not worth showing. 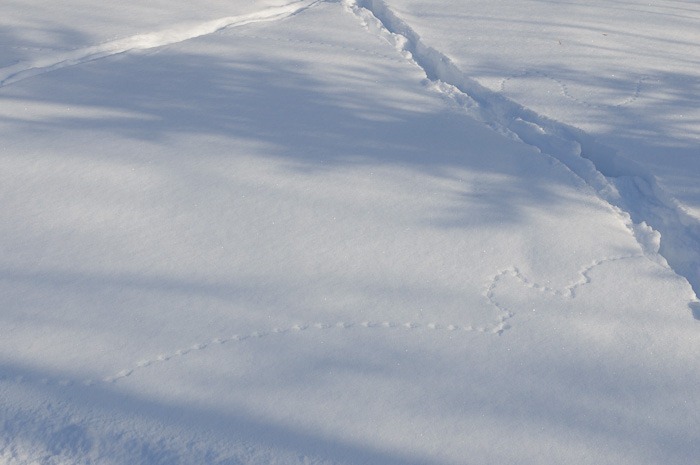 The lead picture of this post were not my ski trails, I would not be here writing about the experience if they were. No, the interesting part are the small tracks at the bottom of the picture. I am still wondering what kind of animal leaves those tracks. Above a closer look, if someone can identify them? 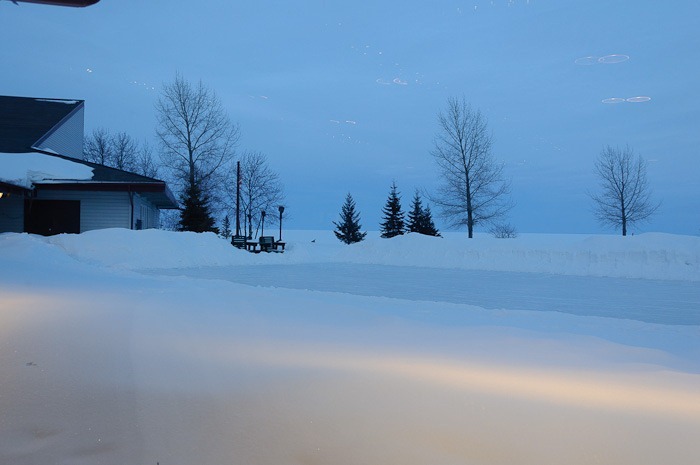 As it turned out, we had been taking the long trail, not the short one as had been our intention. The evening was a nice evening around a quiet supper in the restaurant. Looking outside we admired the colours and decided to take a picture. The pictures showed some surprising light structures, to some known and praised as UFOs, to others know as lamps.

Later in the evening it looked like good weather for some star trails, but once outside it was quickly clear that it wasn’t clear

So, the star trails made place for some more spooky looking pictures. Here is one of them: 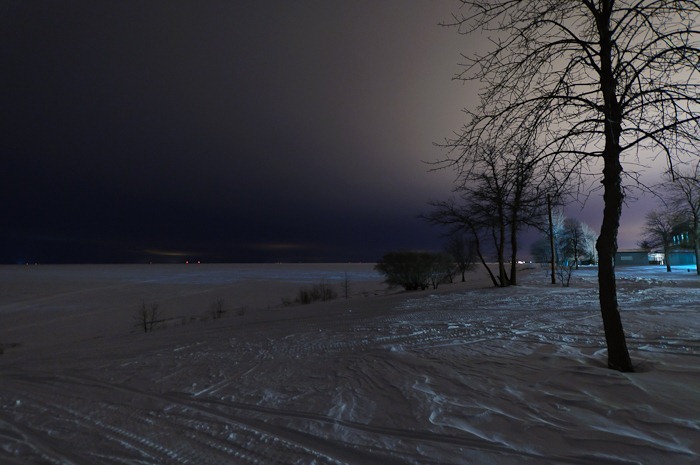 The night lights of nearby Gimli were barely visible to the naked eye. But 30 seconds of exposure showed us the light. Sodium coloured light. As I have done before, I colour “corrected” this and came up with the above picture. Lake Winnipeg from the edge of Camp Morton, looking towards Gimli.

The next day we decided to go for another ski hike, but I decided to leave the camera out of harm’s way, in the Lodge. 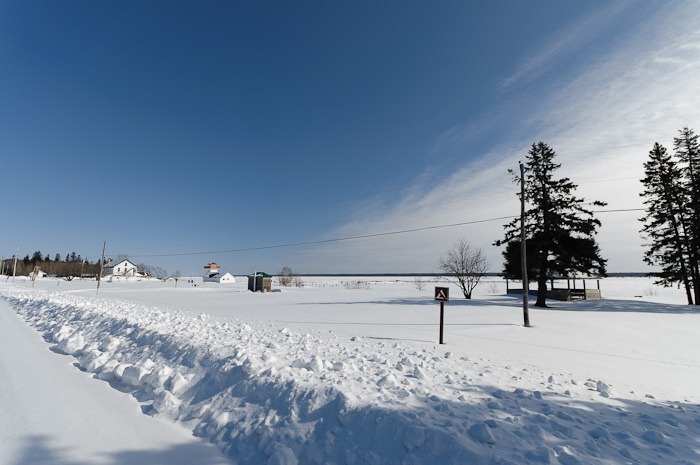 A few hours later we then took the car to get some coffee in Gull Harbour. Not lucky, Gull Harbour in this time of year can be reached by a nicely ploughed road, but is closed. 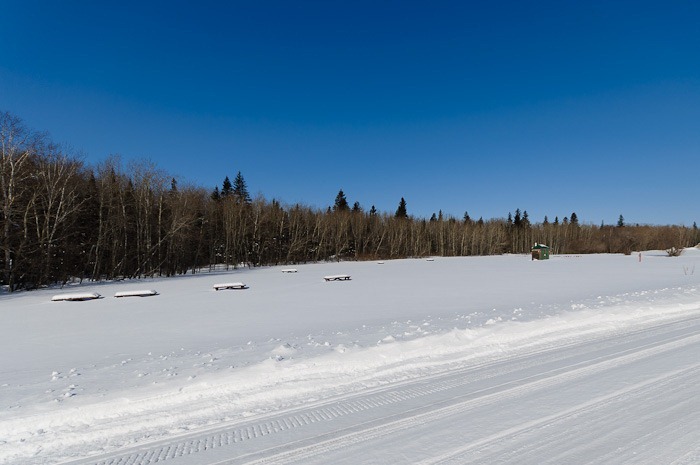 Trying to eat something on a picnic table was not such a hot idea either, so we went back to Gimli, a mere 120km south of Gull Harbour. 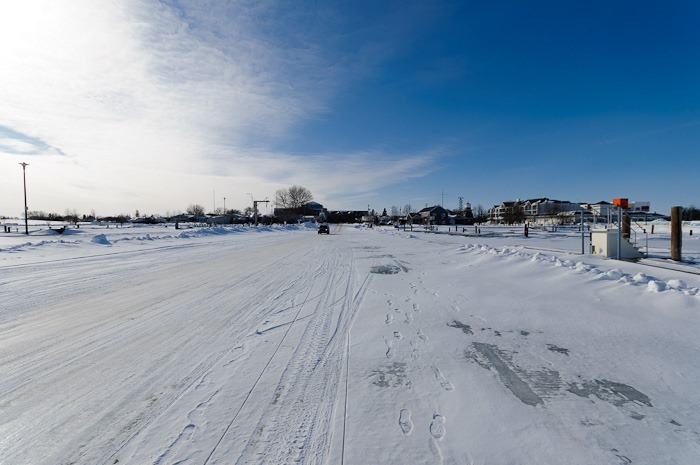 In Gimli, everything is moving at a slow pace. Wintertime, Sunday afternoon, not much to do. Except in the harbour itself, where now cars have the space for themselves and even venture out on the lake. Some even tried to show their (inexistent) driving skills on ice. 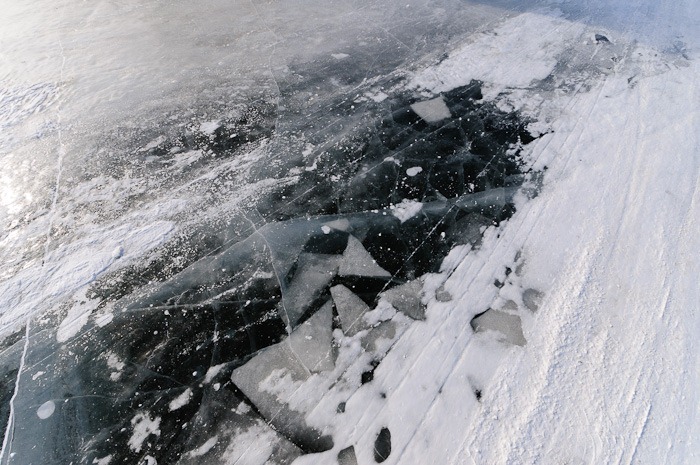 The ice is thick enough to hold a truck, no problem. I think it’s at least 80-120cm thick. 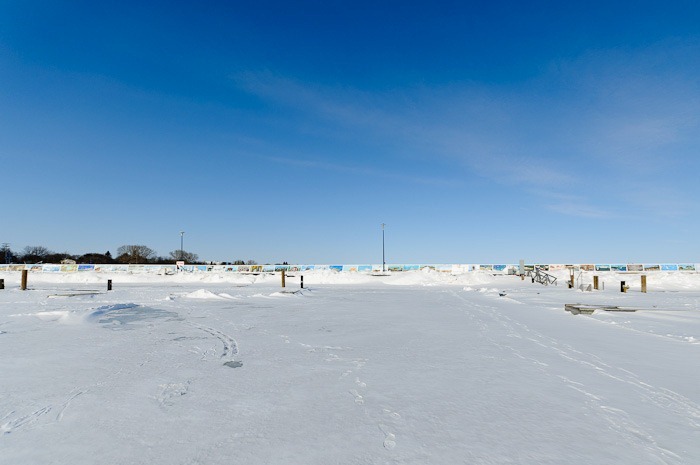 Looking back at the pier with winning pictures nearly froze off my fingers. In the course of the day, the wind started to blow, the temperature was now far below –25C. Later we saw that Environment Canada had issued a wind chill warning, so that ended that surprise. 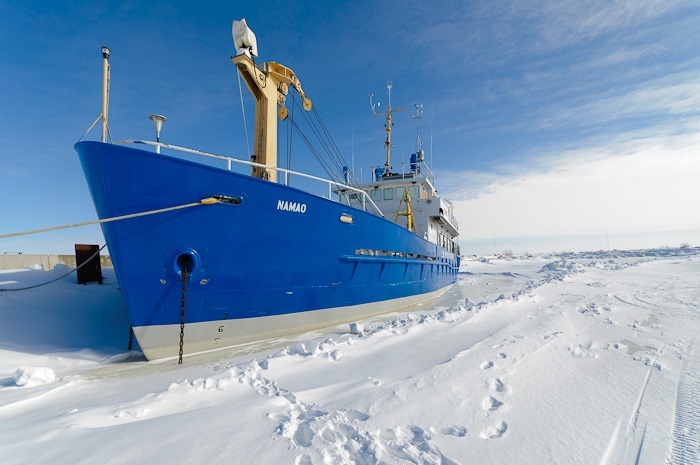 The Namao is now moored quietly in the harbour. The hull warmed every so many hours to make sure that the pressure of the surrounding ice does no damage. The blue paint makes for a striking image, compared to the snow and ice.

And staying with ships’ hulls, the Coast Guard was hoisted out of the water before winter came. I guess their work can now be done on snow mobiles and by car until warmer times. 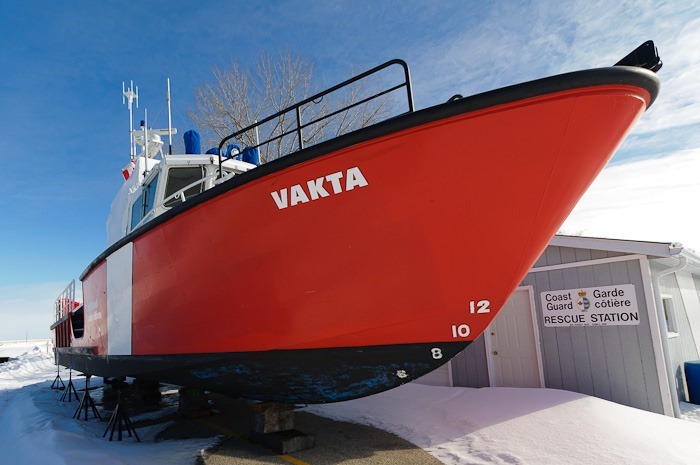 It’s not often you can get a shot like this of a perfectly working ship. The colours were irresistible. VAKTA was named and dedicated, paying tribute to the rich Icelandic heritage of this region. "Vakta" in the Icelandic language means "on watch" or "on patrol".

After this little trip in Gimli Harbour we decided to head for Winnipeg and warm up at home. That is where I write all there stories.

Until next time: take care!