Gone to the dogs

The Festival du Voyageur has come to an end and all that is left are memories and pictures. I have spoken about the ice sculptures and the ancient activities here, now it’s the time to say goodbye. 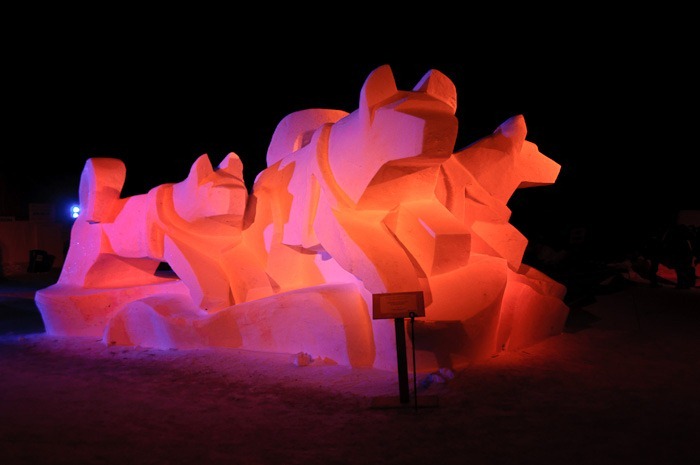 In a colourful way, of course. The Festival will be back next year, until then I count on lots of other photogenic occasions. For now, let’s say goodbye to the Festival, shall we?

Of course the sculptures will stay here for some time to come. I don’t see any balmy summer temps here anytime soon. Until then the sculptures stay, but unattended and prone to vandals. I could post a picture of the vandalized sculpture in town here, but that would give them too much honour and would incite them to do that again.

The next sculpture behind the leading dogs are the travellers themselves. 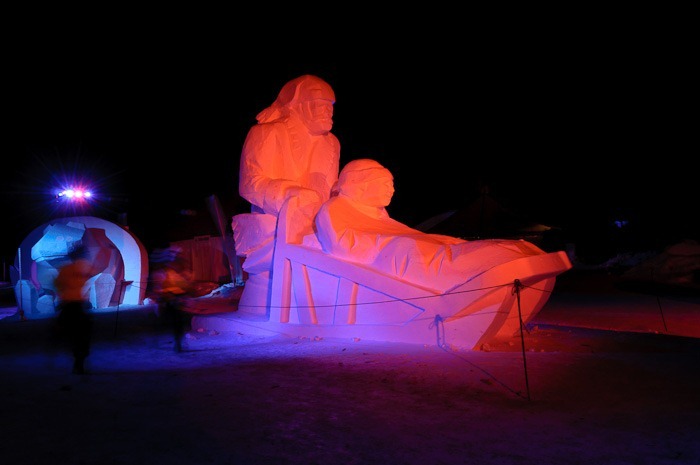 This year the leading sculpture is divided into two distinct pieces. Cubistic dogs and finely detailed trappers. A nice way to separate old and new but keep them together at the same time.

After all, past present and future are all linked together. And the common link is us, right? 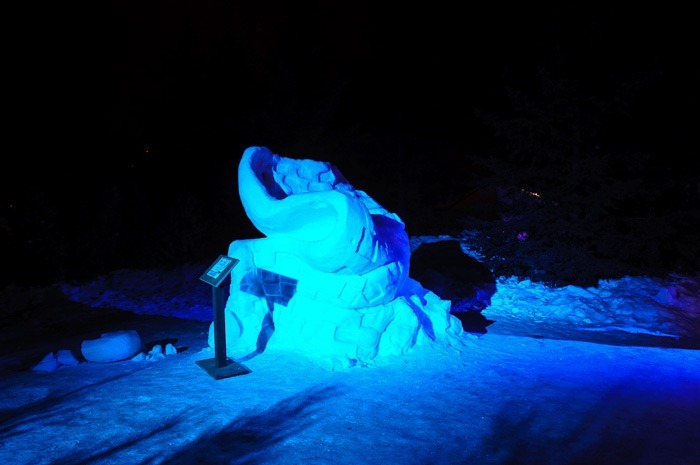 This sculpture was meant to be forgotten, I think. Behind the entrance and some bushes. Only in the evening this sculpture brightens up and asks for attention. 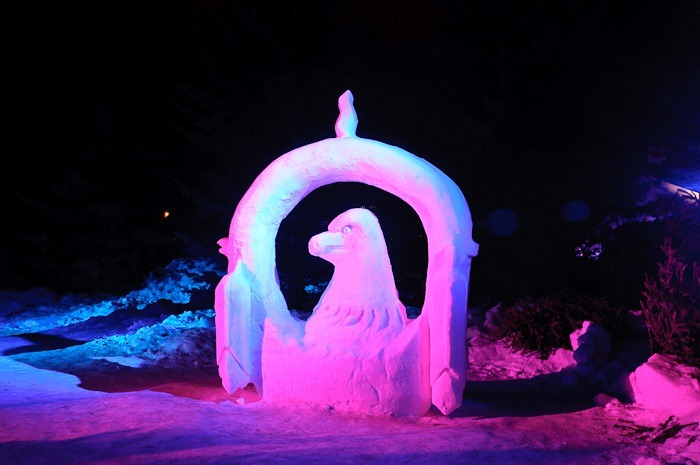 The bald eagle is also behind the entrance bushes. The coloured lights really make him come alive. Albeit in a cage. 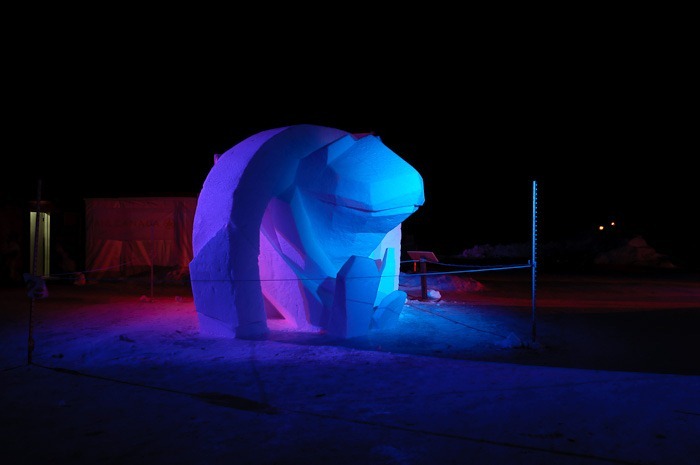 As you may notice, this post has a lot of colour. And none of it is really natural. Also, apart from removing some protective ropes around the sculptures, these pictures are not photoshopped in any way. No colours added or removed. Except for the ropes, these pictures are nearly Straight Out Of the Camera (SOOC). 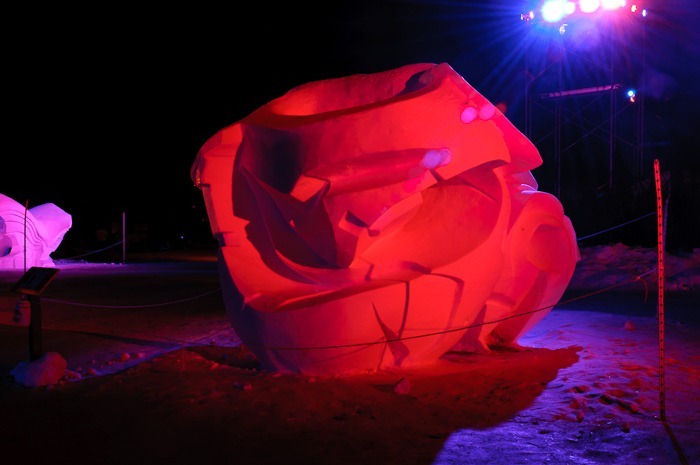 But whatever colours there are, you must admit that these snow sculptures are really great to shoot in this kind of light. Auvergne shows a lot more details in the evening than during the day. I guess the real Auvergnats are somewhat like that too. Auvergne is a region in France, where the people have a reputation of being rather closed to the outside world. Exceptions excepted , of course. 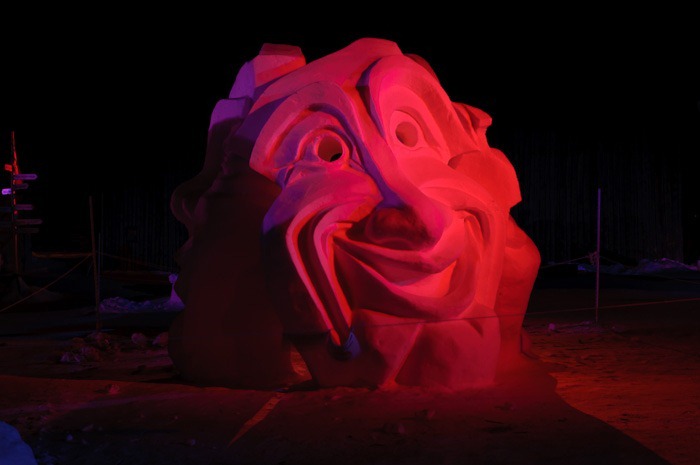 Some seemingly “funny” sculptures present a whole different view in this light. The one above makes me shiver instead of laugh. Or was it the wind? 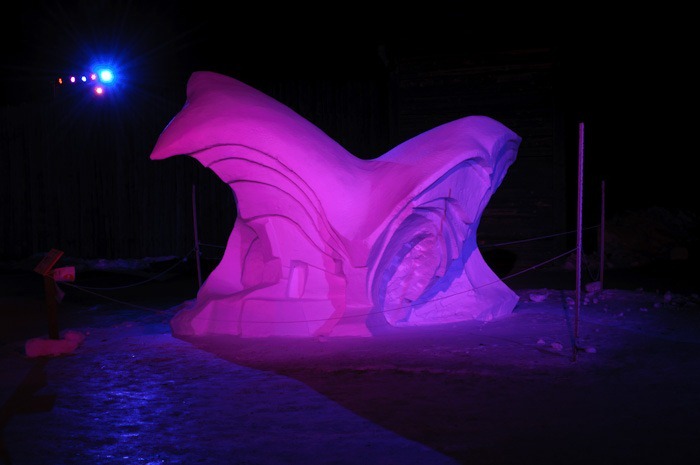 The bridge presented here may look like a fictional bridge between worlds in daylight, by now it looks as if it wants to eat me. Definitely a bridge that I wouldn’t cross at night. 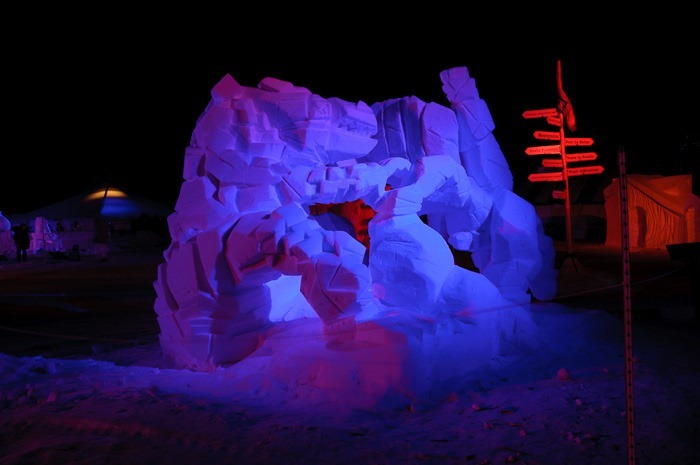 St George and his Dragon

The dragon is still not slain. I would have expected some greenish light on that dragon to make him look even fiercer, but in blue it looks like a toy dragon, straight out of some “Transformers” series. 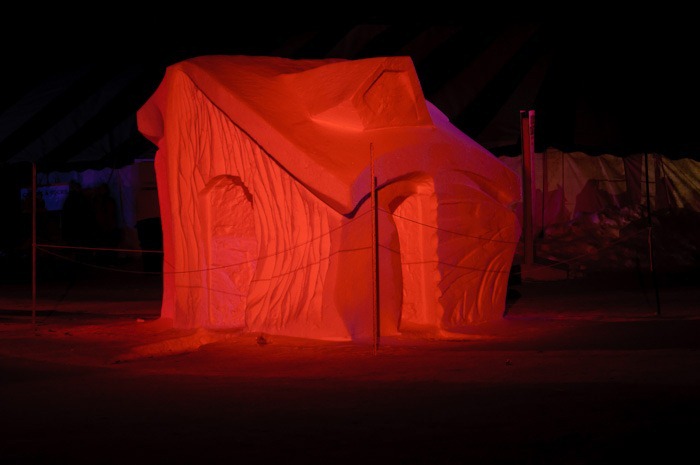 One sculpture that shows better in the night is the French Repere. Now it shows textures and mystery that it conceals during sunny hours. 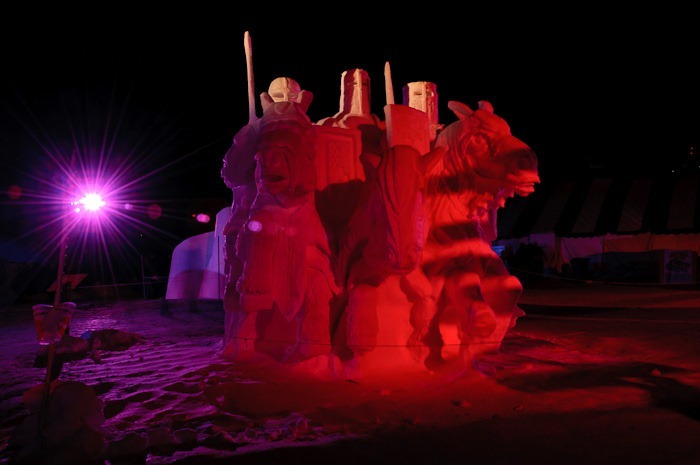 The knights going to battle are still looking fierce and ready to fight. I could have photoshopped the shadows out, but that was too much work. Everybody who would have taken this picture would have known that I would have manipulated it. No, better leave it as is. In case you wonder what kind of object casts a shadow like this, look at the signpost behind St George and his Dragon. 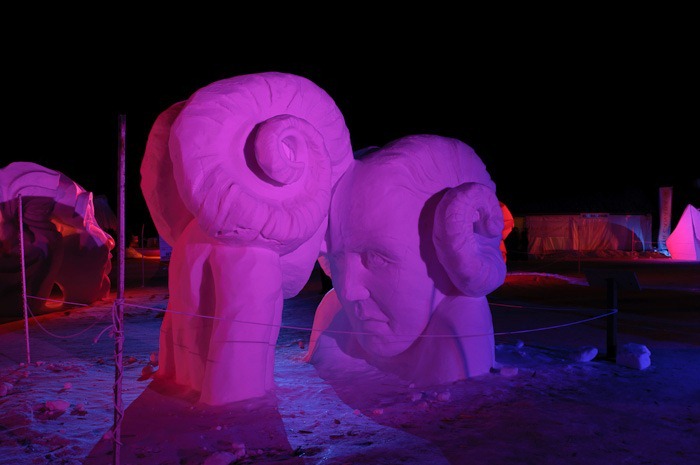 The head butting confrontational ladies from Holland look even angrier in the coloured lights. Not that they scare me, I grew up among them. HAH ! 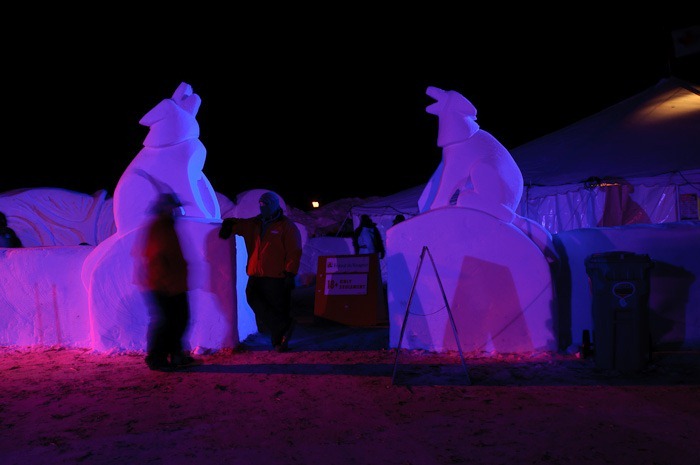 The Snow bar entrance where you can get your drinks in ice “glasses” is guarded by fearsome, howling wolves. Although that doesn’t seem to disquiet the bouncers. The bar is 18+ so children cannot get in at night. 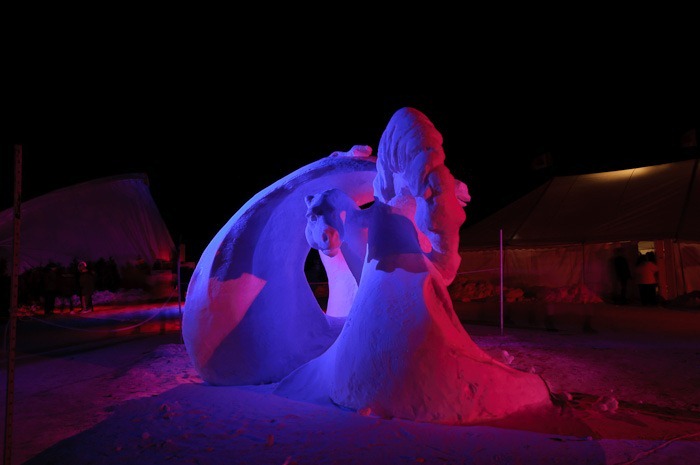 The horses? hydra?…  ok, creatures of Deviations of Speed look nice and friendly in this light. In daytime I guess it’s best to not cross their path…

And in this colourful way I say goodbye to the Festival du Voyageur edition 2011. I took these pictures during about an hour. An hour I spent half outside taking the pictures, half inside to warm up. At some point I sensed that another five minutes in the wind would have frozen some parts of my body. Perhaps I am not that much of a dedicated photographer. I am not ready to freeze part of my body to get that “perfect” picture.

On the other hand, these sculptures were not going anywhere soon. No problem in warming up a bit, eh?