The colours of night

Night takes away light, night is darkness. We all know that, from the beginning of time. Photography is all about light and the recording thereof. 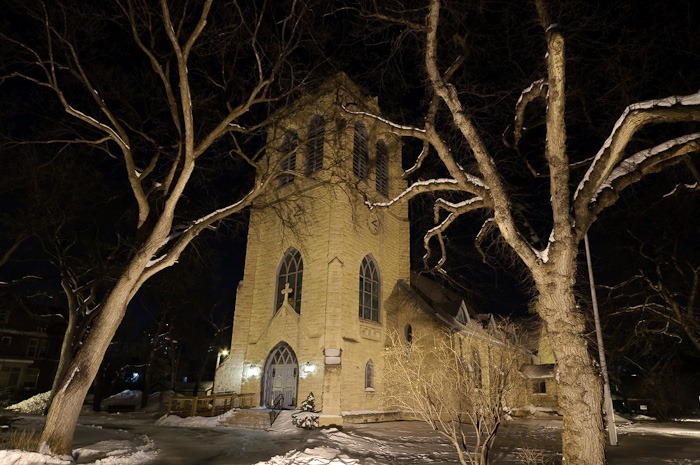 Now what can be of use to photography in the darkness of the night? Well, not all darknesses are of the same shade. Let’s take a look at some of Winnipeg’s nightscapes…

I’m not saying that other cities cannot have this kind of lighting at night, but Winnipeg with all its snow and cloudy nights gives me a nice show of lighting that can be manipulated to better purposes.

The pictures in this post have been manipulated, mostly to correct the sodium light colour cast. If you really want to see pictures with sodium, click here. 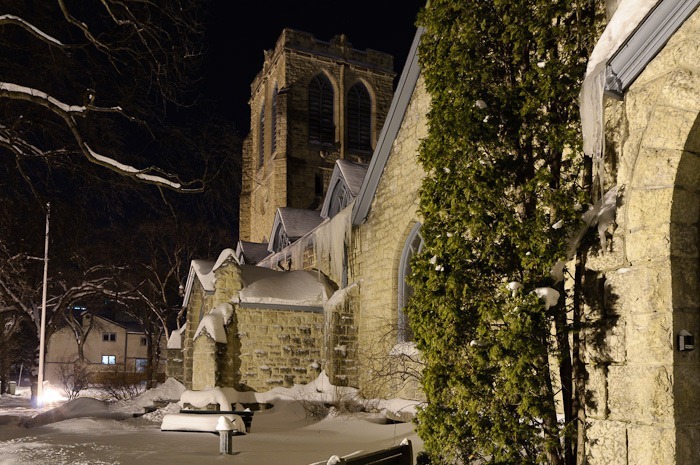 St Luke’s Anglican Church on Stradbrook and Nassau in Winnipeg is a gothic style church constructed in 1905. In the sodium lights during the night, the church looks like this. But if we “correct” the colour of that sodium light we obtain a far more interesting picture. 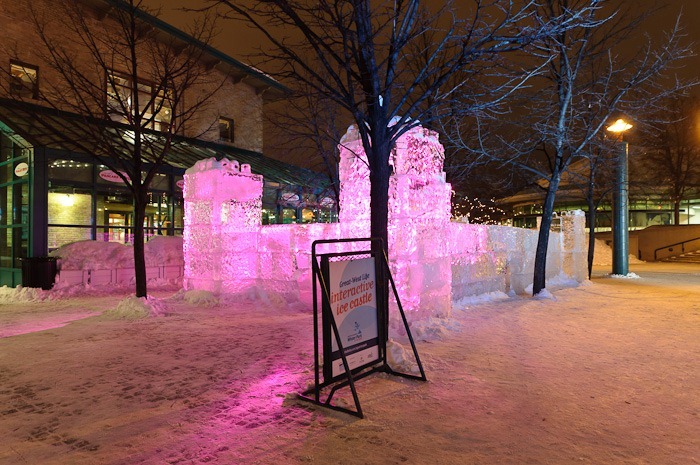 Ice castle at The Forks

Other places do not need any colour correction. Even if I wanted, the above castle is hard to correct in one way or another. The castle is made of ice. The interactive part, as stated on the sign escapes me. Perhaps the evening is not the most interactive time. 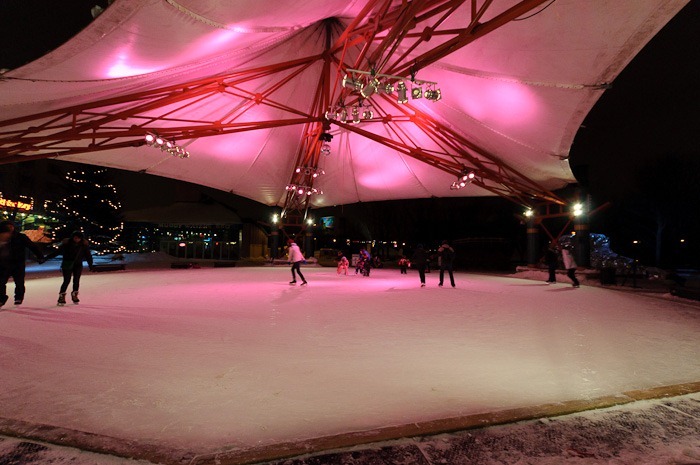 Going skating on the skating rink at The Forks *seems* to be a bit overkill if you have kilometres of natural ice on the rivers, a mere 50 metres away. But here, the small children can learn how to skate without risk and with a chair to keep them from falling. As for the colour, nothing manipulated here, the lights are as pink and red as they come. 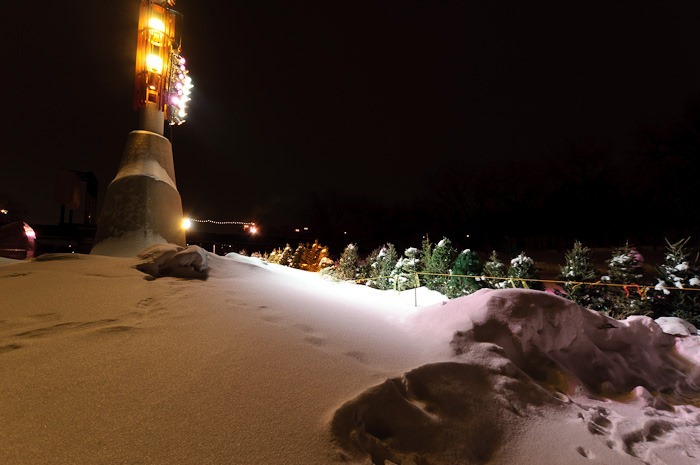 Beaconing for skaters and crazy photographers

The beacon at the Forks now only shows its lights for the enjoyment of the skaters. Here I decided to take a “rougher” picture, without any skaters in sight.

Next, the big Red River itself… Now the sodium colour cast is here, that’s a fact. Corrected, it gives a rather gloomy sight of the river. 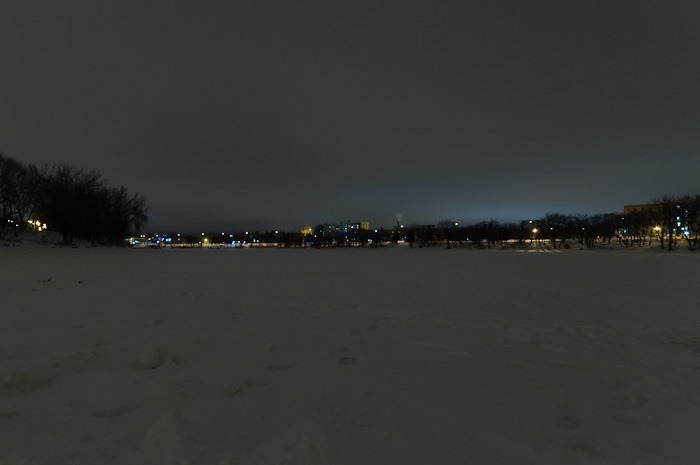 If you think that the snow should be white, the nighttime does not follow that rule… White snow without light is still dark. The picture above give a feeling of a lot of space around you. Not all of that space is very inviting. But the photographer in me loves a picture like this. The only thing I regret is that the sky was overcast.

But the overcast sky provided the light, much more than any starry night could have. 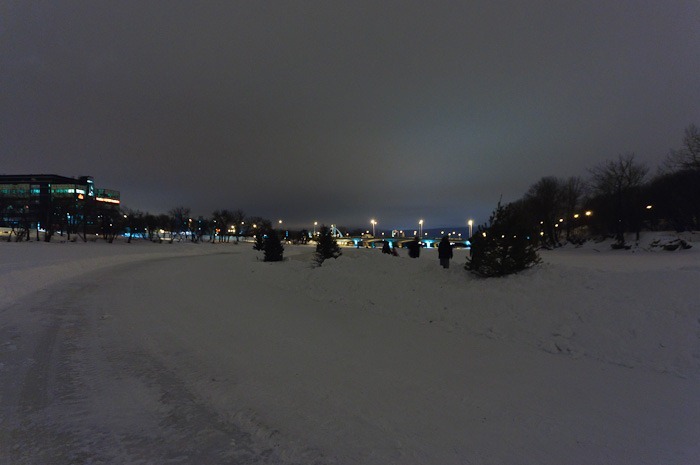 The Main Street bridge. There was enough sodium light reflected from the clouds to get a decent picture without too many troubles. Granted, I used my new tripod to keep the camera stable, but it could have been a handheld picture. Pushing the ISO a bit… 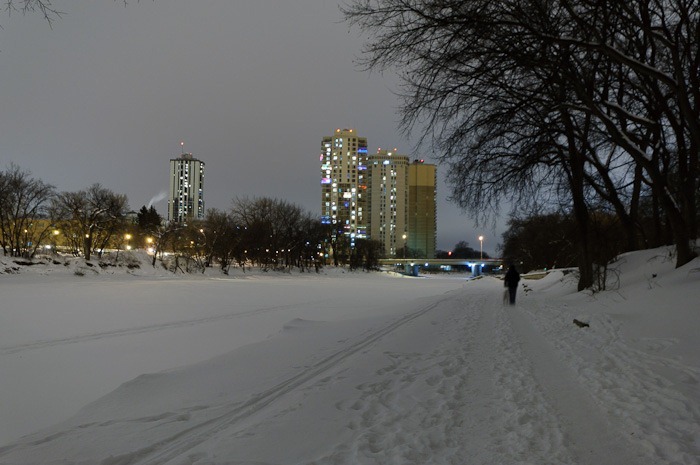 The Assiniboine river gives a more “comfy” sight. It is a lot smaller and more inside the city. It also gets more light from the reflections off the clouds. Again, the sodium colour has been removed, leaving a more natural nightscape. 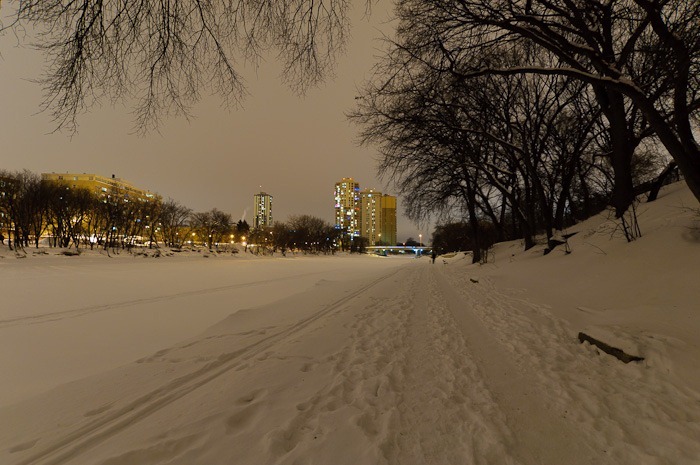 A few minutes later, zoomed out a bit, a little sodium colour left in the picture for reference. I cannot get enough of these sights. Perhaps if I walked here every day I wouldn’t want to take a picture anymore, but every now and then there is something new and picture-worthy on this river.

I guess I will have to come back regularly here

As you can see, with a little effort, nightscapes like the ones shown here can go from sodium-rich to sodium-poor and still keep their interest. All it takes is a camera shooting RAW, a tripod and an eye for detail. Having some warm clothing will most definitely come in handy too.