That’s what you can expect in a Manitoba Winter. This afternoon I went to take the River Trail on the Red River in Winnipeg. This year, the trail is about 3 kilometers long. 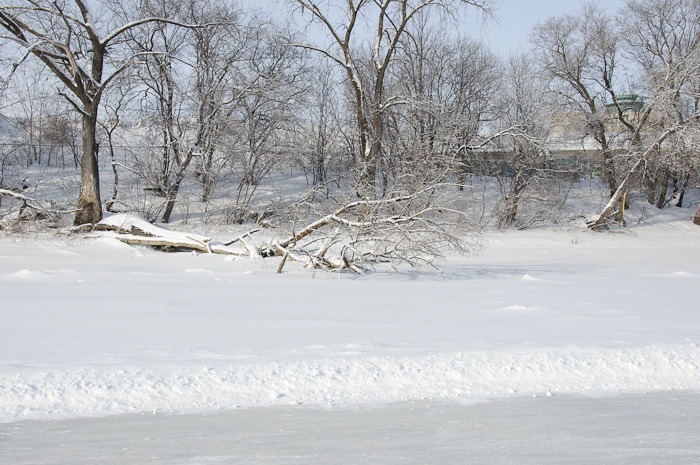 But in temperatures like this afternoon’s –26C or –33C with the wind chill, these 3 kilometers were all I could do. I considered walking back the same trail to go home, but decided…

to take the bus instead… Not that that helped much, the next bus was too far away for me to wait for it comfortably. So finally, I walked the remaining 4 kilometers home through the city streets.

As was to be expected, there were not many skaters on the trail. The few that did brave the cold were nicely wrapped in scarves and other textile garments against the cold. Not many skated the whole trail either. A few hundred meters and then back. 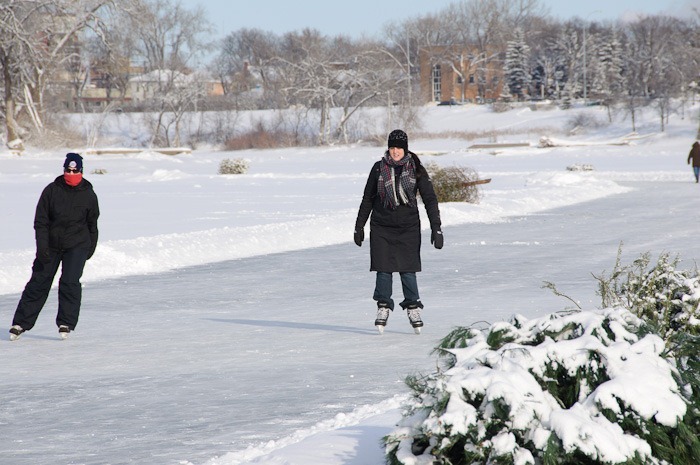 But what about the atmosphere on this trail? Obviously I could have waited a little for the temps to rise a bit and be more comfortable on the ice. But I didn’t want too many people around.

I wanted to have the feeling the old trappers or voyageurs had when they travelled on these rivers, a few hundred years back. No other people around, only the silence and the clamour of your own thoughts. 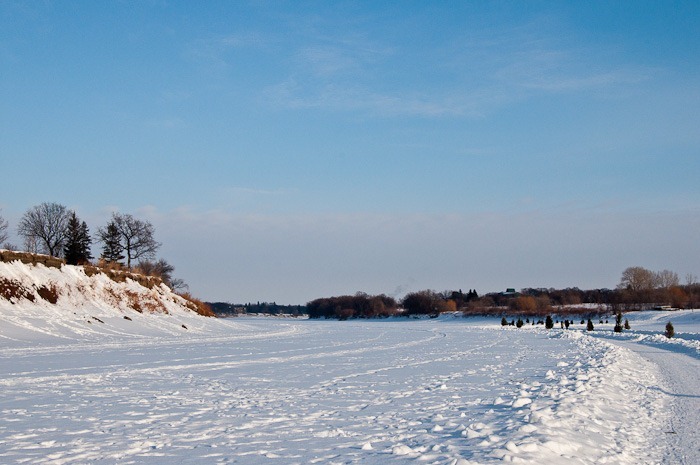 Take only pictures and leave only footsteps…

The Red River Trail is situated in the heart of Winnipeg. It stretches 3.1km this year. The Red River is a wide river with LOTS of water going under your feet, even in winter. The water level dropped a bit since the beginning of the frost period but there is still enough flowing water today. Just take a look at the layers of ice that are unused. 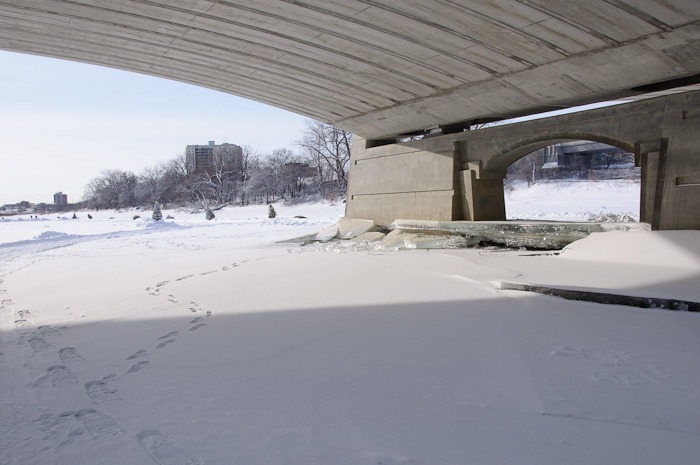 The river is wide, I think I already said that. The silence on the river is such that you don’t believe that you’re in the middle of the city. Only rare city sounds like sirens arrive vaguely in your ears. For the rest there is the silence and the sound of your own footsteps in the snow.

In some places you can even take pictures avoiding all human activity in the frame, no Photoshop required. I guess that this was the way the old voyageurs must have felt when they came to Winnipeg to trade their furs and other specialties. 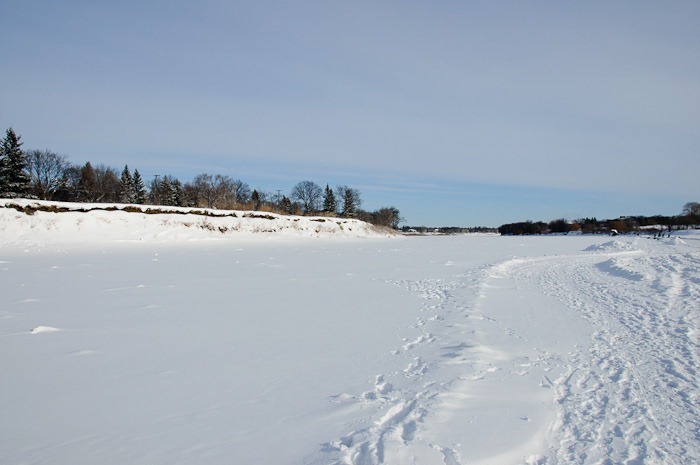 All alone in the white white world

But thanks to new construction that will soon not be possible anymore, unless I take a longer walk, on a non-approved trail on the river. At my own risk, of course. Perhaps… next year…

The few people I crossed on the trail were skaters, and a lone cross country skier. I was the only one walking here. It didn’t take me long to walk these 3 kilometers, but then, I had the wind in my back (my back remembers…). 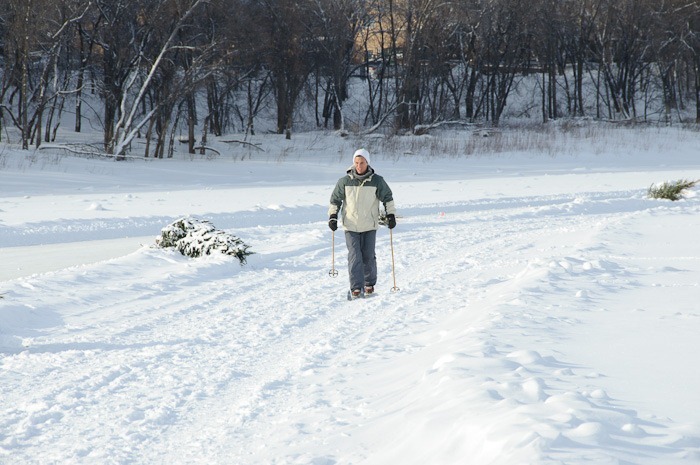 All the time I was walking, I imagined myself in the old days when the voyageurs came here in winter to trade and have some fun. It must have been a hard time. No amenities along the river to warm up, I had a free hot chocolate at the Forks before I started my walk, they didn’t have that luxury.

Only the wind, your footsteps and your thoughts. Just imagine that in the middle of any other city in the world, anywhere. I can’t. For those who live here in Winnipeg and haven’t walked this trail yet, I can only say: do it. But also take warm clothes, the wind over the river, however gentle, does not forgive easily. 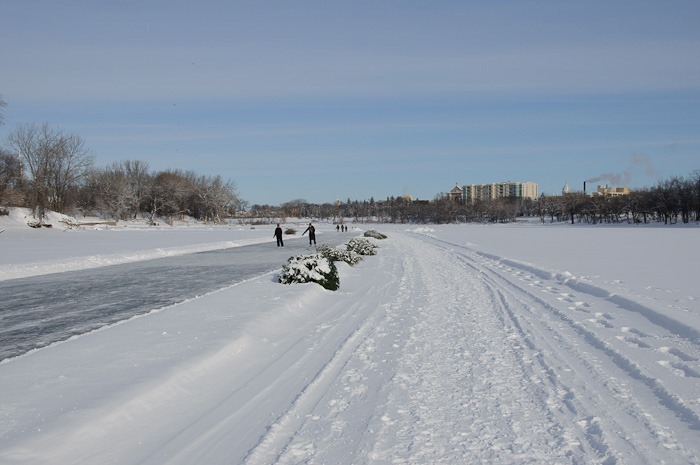 The “fallen” spruce trees are not yet set up for the upcoming “Festival du Voyageur”, I imagine that will be done in the next few days.

Once I arrived at the final warming shack on the trail, I decided that walking back with the wind in my face would not be a good idea. Better to stay healthy and repeat the experience when the wind is blowing from the south. Then I’ll have the complete trail on record.

Soon the Festival du Voyageur is coming, there will be a lot more activities here on the ice and the quietness and the feeling of undisturbed nature will be gone. But then, the Festival is another great period in the year in Cold Winnipeg, great for amusement and photographers.