Keeping the cold out

By now, everybody knows that Winnipeg can be a cold place to live in. I guess even many Americans by now understand that Mother Nature still has some cool tricks up her sleeve. Very cool indeed, freezing. 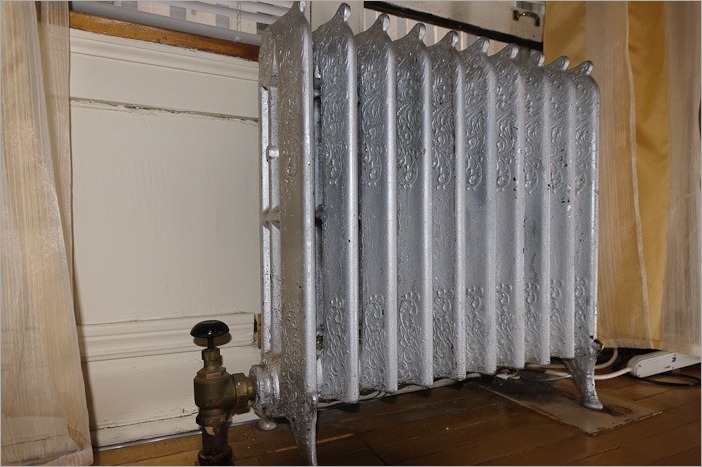 But how do you keep warm in Winnipeg? Easy enough to imagine warm clothing. But what about the houses and apartments? Well, over time, methods of heating have changed, but the result is still the same, come on in, and warm up a little…

My building started in the coal period. Heating was good, warm and dirty. Coal dust was everywhere and white sheets on the beds were quickly light grey sheets on the beds. In individual homes people quickly switched over to something cleaner. 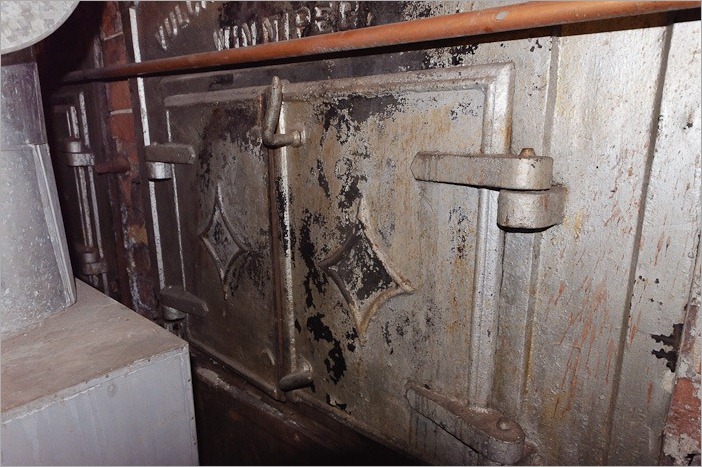 Now closed forever, these doors saw a lot of coal coming through

But at the same time, the installations using coal for heating apartment buildings were still working. This one is from the Vulcan Iron Works in Winnipeg. A company in part responsible for the Winnipeg General Strike of 1919.

Replacing these stone hearths was not as easy as a home installation. The “oven” was often made of stone and cast iron. 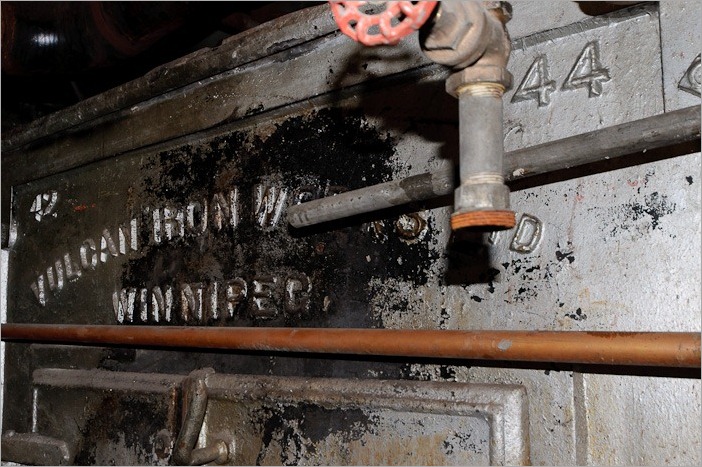 In some places they simply left the stone hearths and placed the newer gas boilers in front of them. Not bothering to reclaim the space. It is a lot easier to move a few pipes than to move tons of brick and iron. 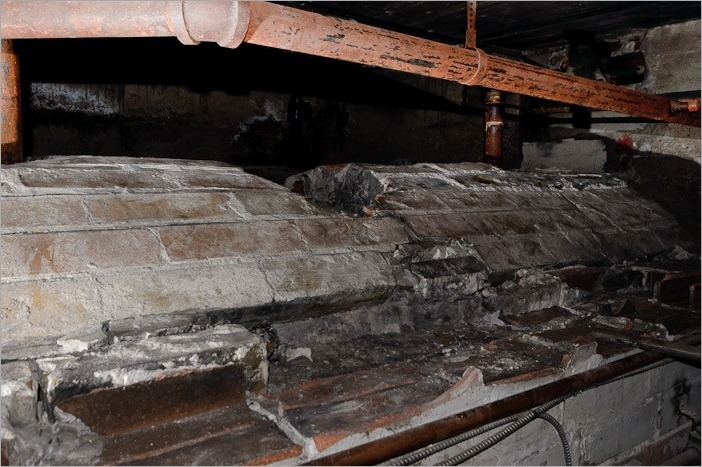 The pictures here are from my own building. My building is what is called a “heritage building”, meaning that it is now more than a hundred years old. The heritage status also means that no big changes may be carried out on/in the building. The inside, however, can be modernised when necessary. The building is from the early 1900’s. 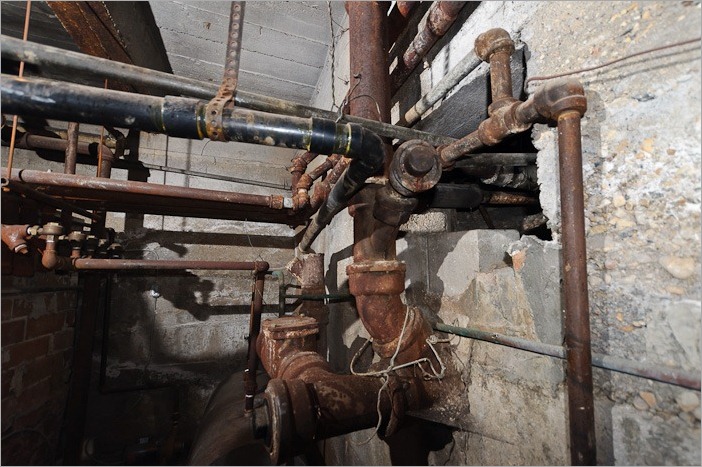 That leaves us with cast iron radiators, a nice facade that can only be painted, not changed, and a heating system working on steam.

Steam heats your apartment perfectly, to the point of overheating. Then the system switches off, and if I (replacement caretaker for a few days) have not switched off the boiler to drain the condensate, the heating will come back on and renew the cycle. This system works on gas. 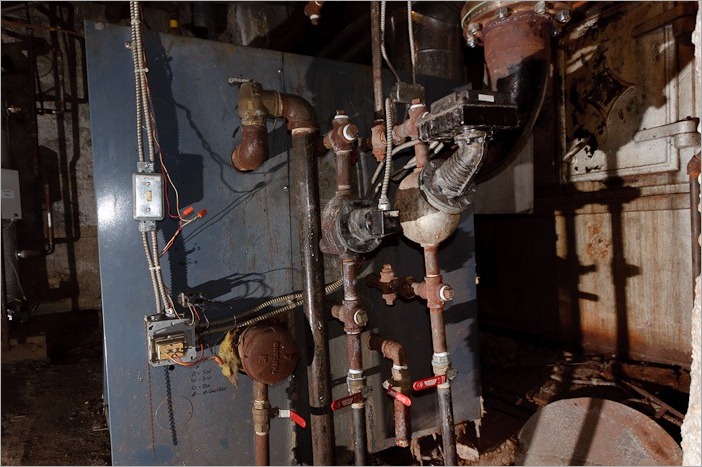 In the old days, however, there was no boiler working on gas. It was heated by coal. I can imagine the caretaker, or a specially hired man, to be responsible for the fire heating the boiler.

The sight would have been like one you see in old films; stokers shovelling coal into old steam train and steam ship boilers. A hot and sweaty job no doubt. 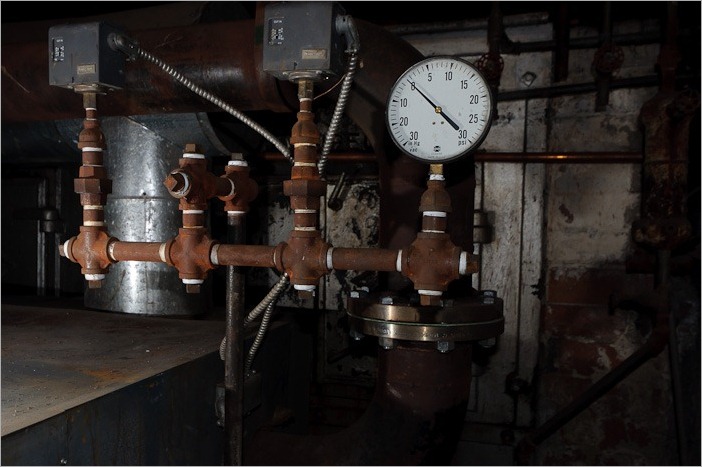 The modern ways are a lot cleaner. Gas boilers heat up the water to steam. The steam goes into the radiators and heats the apartments.

That leaves you with only one small item to deal with. 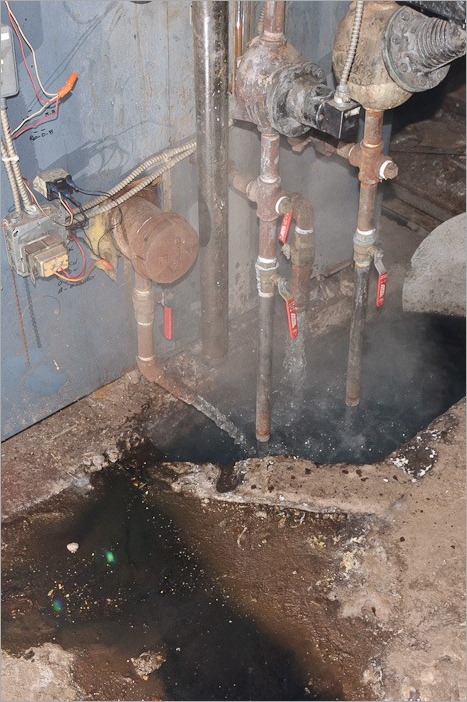 If you do not remove the condensate from the radiators and the boiler, the next time the steam arrives in the radiators, it starts heating up the remaining water in them. Bubbling and boiling away. You would think that’s not a big deal, but in the night these sounds really keep you awake. So the system needs to be drained on a regular basis. After that you can sleep peacefully.

That’s how the heating is done in our building. Of course other systems exist, but when the boiler needed a bit of repair and maintenance, we had to heat the apartment with an electric heater. We saw the electricity bill heat up, more than the apartment. It’s a lot better this way.