Today was a good time to dive into the tropical history of Manitoba. When we woke up this morning, the thermometer still had to wake up. After shaking it for about five minutes, the thing came up with a temperature of 29C, below zero. 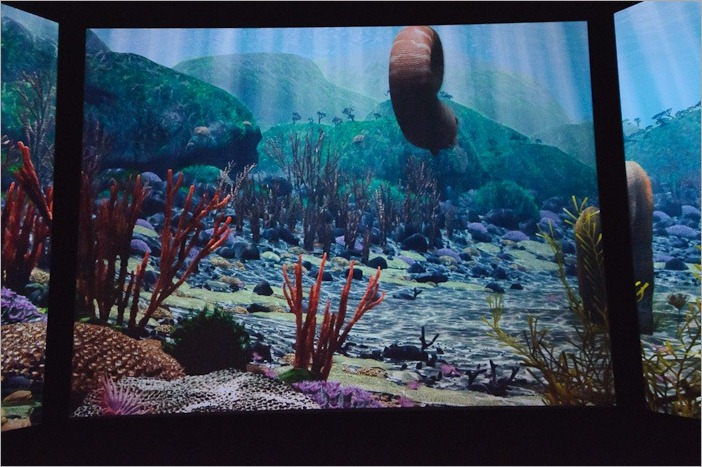 So we decided to see Manitoba in more interesting times. Climate wise, that is. Manitoba, 450 million years ago was situated around the equator and had a tropical climate. Now that’s more like it… Minus 29C? No way! Let’s take a look!

The Manitoba Museum is one of the best museums I have visited until now. And the best part of the museum is that it has heating everywhere. And it allows for photography unless that is too extravagant. Don’t go there with extra lighting and tripods, they may not like that. 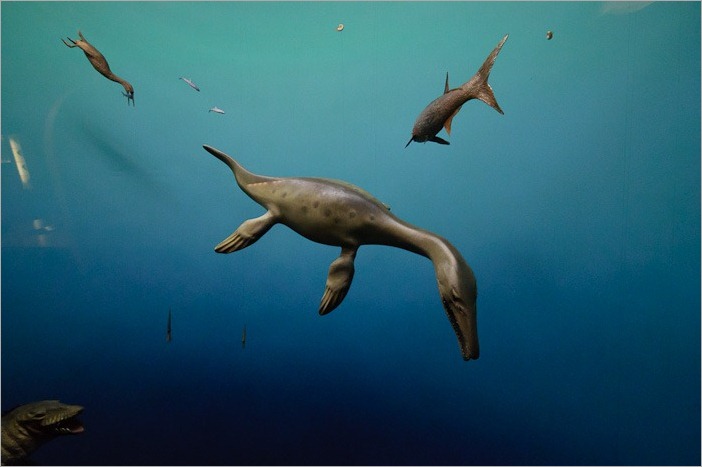 Not for on my table, too many teeth

What is today Churchill, the city, not the statesman, was located around the equator about 450 million years ago. Nice to know, but there were no people in that period. But with all the fossils that have been found in the area we can have a pretty good idea of what it looked like back then.

Phlesh Bubble from Australia was the company that made these animations. And they did a superb job. Three screens with a total width of 7.5m immerses you in that ancient tropical sea. Trilobites scurry over the seabed, occasionally eaten by another creature. You are in the middle without getting your feet wet. 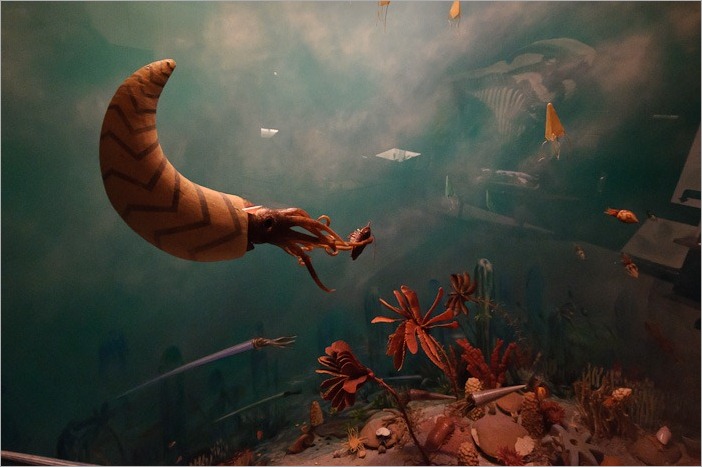 The other exhibits are also pretty impressive. The picture above, apart from the unavoidable reflections on the glass, just shows you how much work went into the details of each object. It looks as if they were just swimming around in an aquarium.

Then, the timeline leaps a bit, a quantum leap you could say, and you’re transported to more recent times where Manitoba is where we know it to be today. 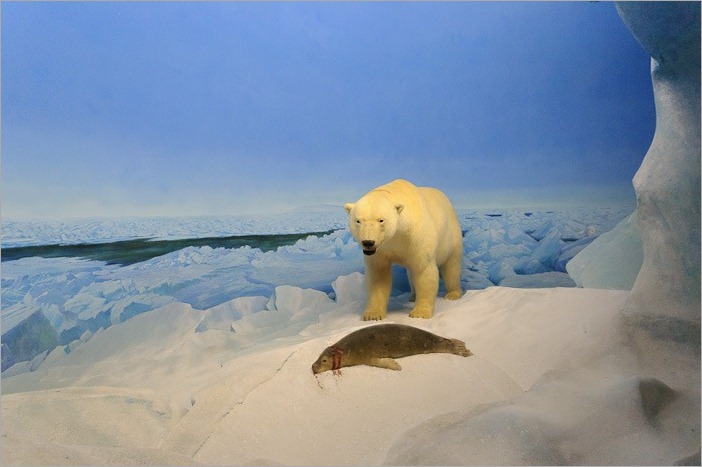 Polar bears hunting seals with success in their icy environment. It seems that today in Churchill these pictures are quite normal and occur nearly every day. Good for the bears, pity for the seals. It seems that seal is very rich in nutrients and make up for a big part of the bear’s diet. 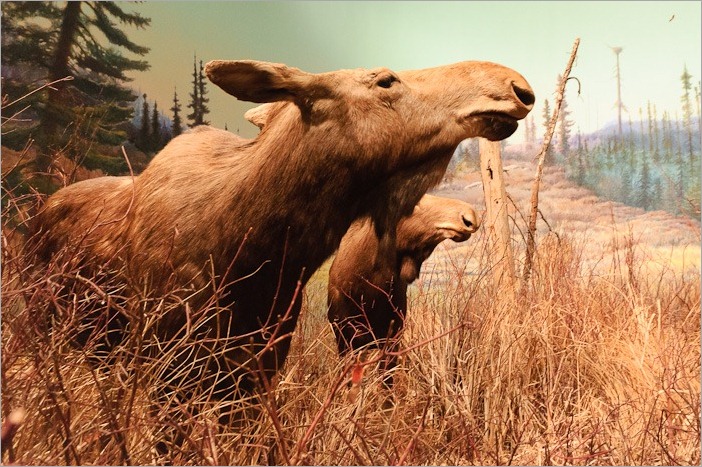 Moose, practically alive, except for their passage through the taxidermist’s hands greet you with their quiet ease. It’s a good occasion to get pictures of these animals. They have been hunted for so long that today they really know where not to go. They don’t go where people can be. Not stupid for animals as big as these. 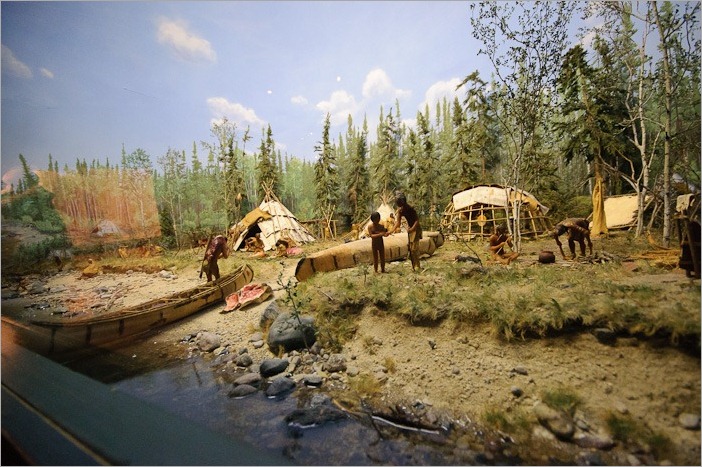 Then you are transported to a native village, a daily scene the way you could see them about 300 years ago. Men returning from the hunt, women cleaning the smaller animals and preparing dinner. Everything as lively as possible. Except that nothing moves. Makes it easier to photograph 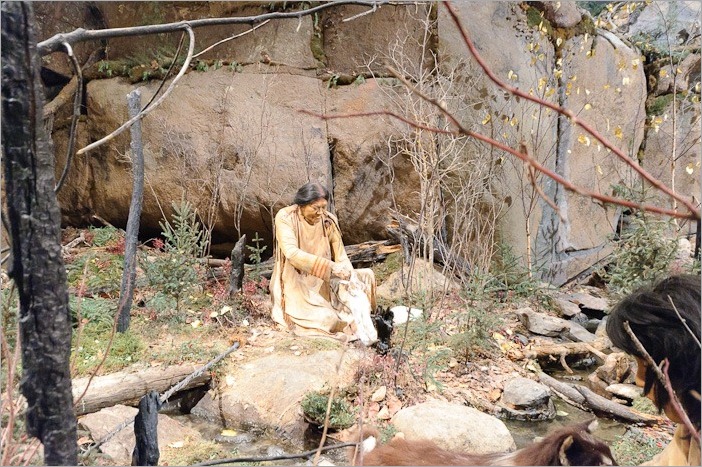 Elder woman preparing rabbits for their final transformation into food.

Scenes like these are set up on a life-size scale. These are not miniatures or small dioramas. You can lean over the barrier and take pictures as if you were there. Using the barrier as a sturdy place to put your camera is an extra benefit. Most of these scenes are pretty low-light scenes and any camera will have a hard time. Even more if your lenses are not so light hungry. 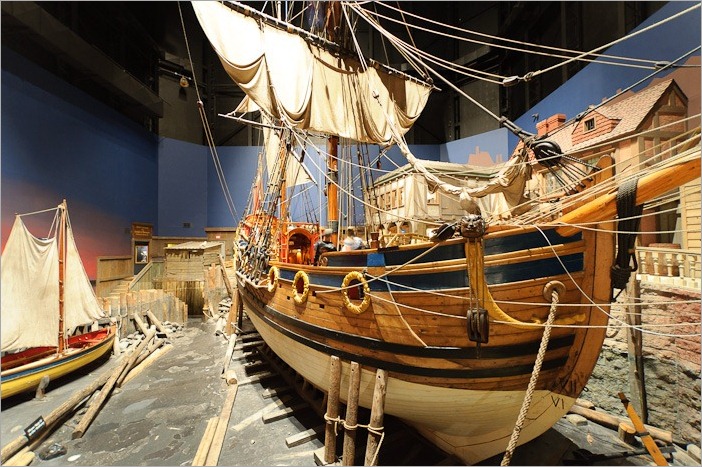 Then arrived the white in the country, by means of ships out of the ports of England and Ireland. The Nonsuch was the ship that made the Hudson’s Bay Company a reality in Canada. More about the Nonsuch is here. From that moment on, the history of Manitoba began to change, rapidly. 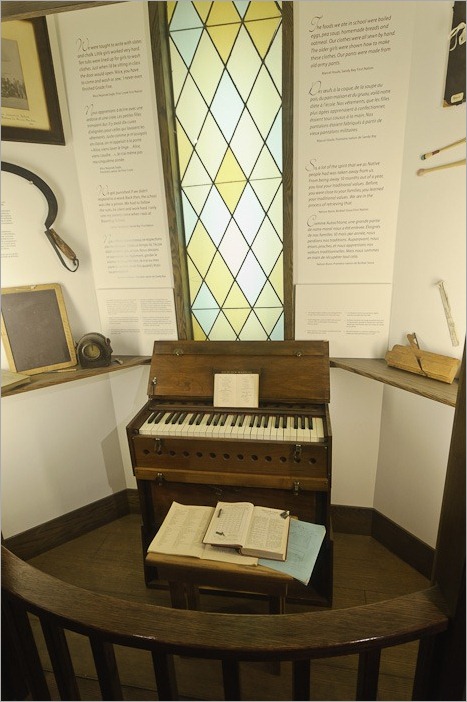 Schooling the Native Americans began with methods that stamped out the traditions and values of those receiving schooling. Family ties became loose and traditions faded away. The above picture shows a few testimonies of those who went to the schools, and came back forever changed. 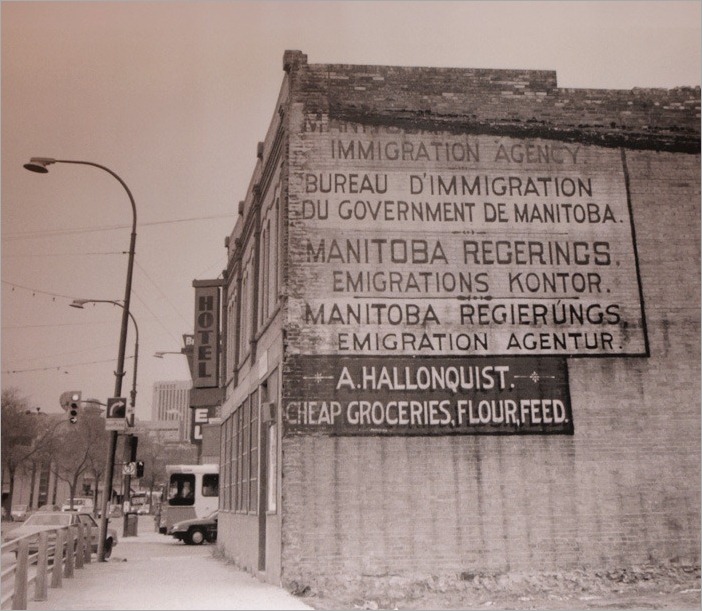 After that came the immigrants. From all over Europe. Some of the people didn’t seem to know the difference between emigration and immigration as shown wall size on this building. 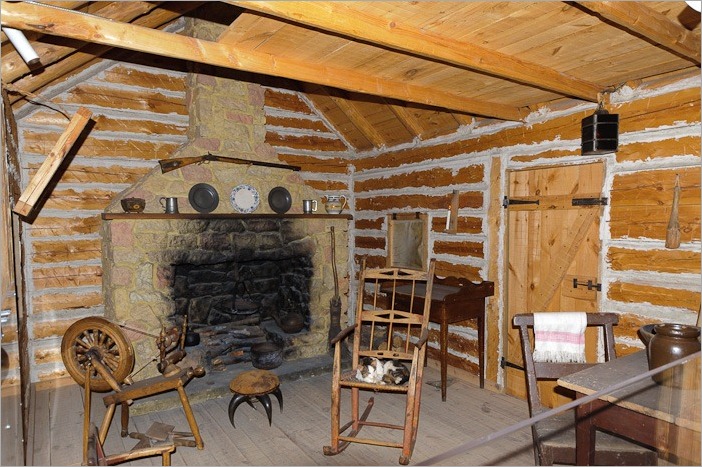 People had to have a house to live in. Often enough in the coutryside this was realized in the form of sodhouses. In Holland, if you talk about people from sodhouses, you are talking about people that have nothing, too poor to even have a decent home.

Here sodhouses were rather common and were easy to build and maintain. And it was also easier to have a roof over your head while you were building a better one. 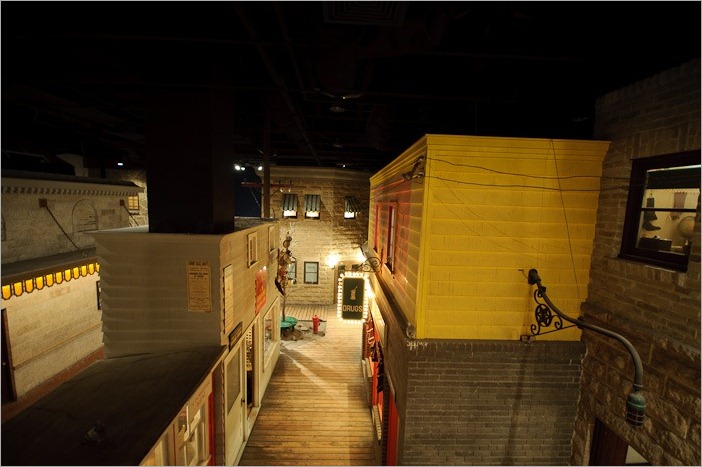 In the beginning of the 1900’s cities were growing rapidly. All kinds of amenities were created and the Manitoba Museum has a very nice display of that. Most of the shops and factories can be visited from close up, you walk in and see how it was. Immersion is the keyword here. 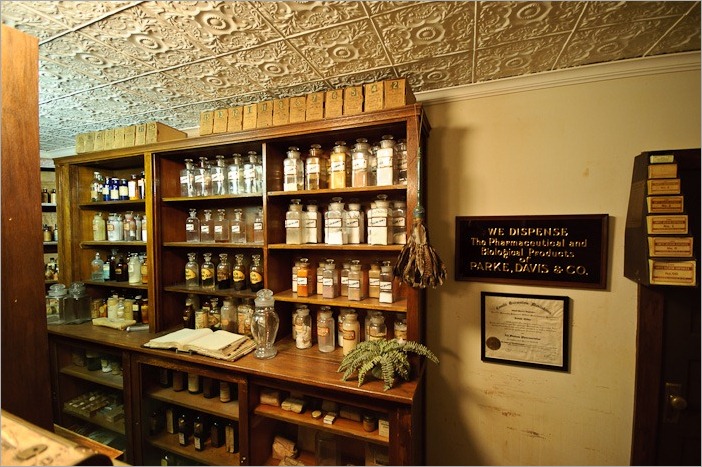 The chemist’s seems to be very well stocked, even for photographic material from Kodak. Good stuff, although I doubt if anyone today still knows how to use it… 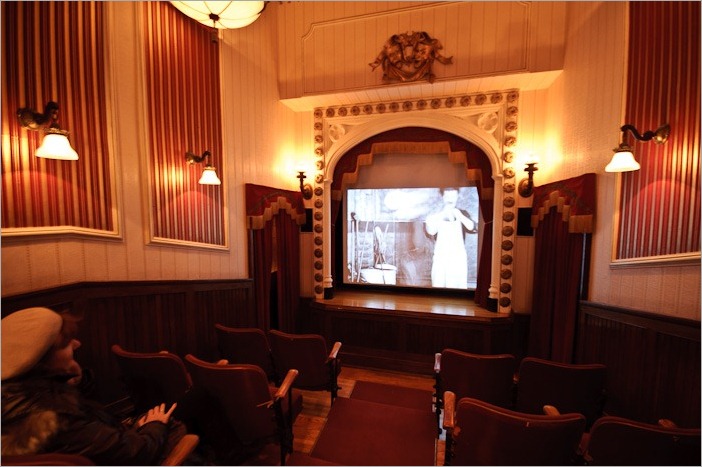 The cinema shows a constant show of old black and white silent movies. We arrived for a Charlie Chaplin movie and watched until the end. Didn’t catch the name of the film, but it was nice to see and experience in an old movie theatre.

Then it was already the end of the historic walk through Manitoba. 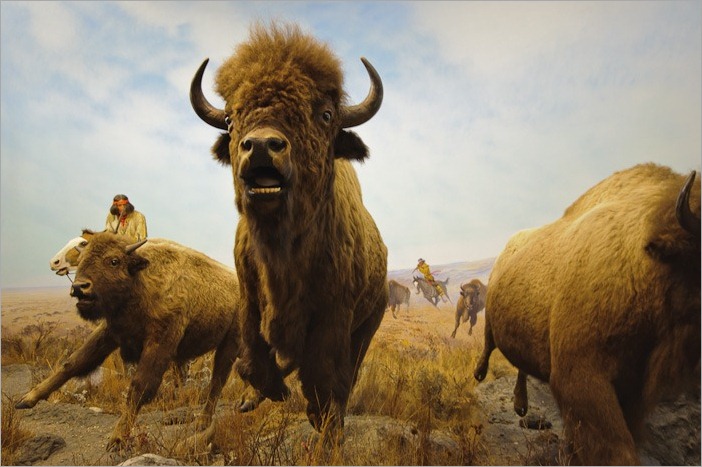 The entrance and exit of the historic walk through Manitoba is at the same spot. There is a huge display of a Buffalo Hunt in progress. Since this picture is used on many pamphlets and posters I didn’t want to miss out on it and present it here as well.

Manitoba has lots of history, much of that is contained in the Manitoba Museum. It is really worth your visit.

As for a Manitoba with a tropical climate… Someone who is moving to Winnipeg and comes to visit Winnipeg in winter should not expect tropical temperatures. That makes the people here all the more motivated about their city. You come here because you like it, climate and all.