Summer’s gone, the dark ages are in front of us again. Many people will hunker down, wait for the “white stuff” to come and go. Photographers will go out and shoot even more than in summertime. 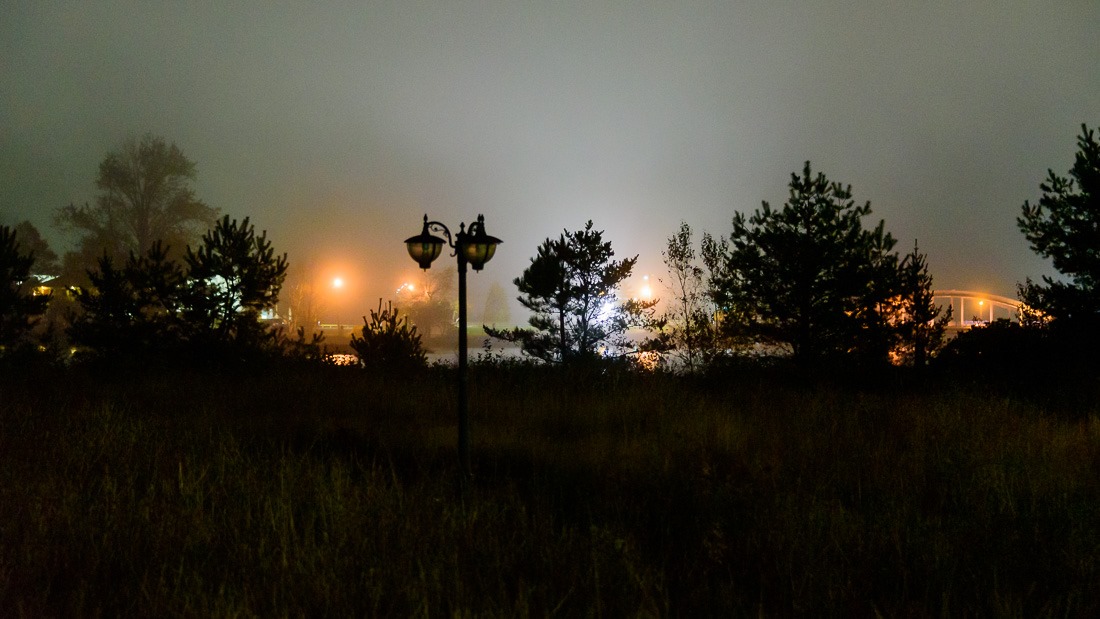 Of course, night shoots are a lot easier now that the night starts early in the evening.

While some night shots are better in the summer, they invariably include mosquitoes. That’s one of the reasons that I prefer night shoots in “not summer”. Usually, I plan my night shoots as it is no fun to get somewhere far away and discover that I have the wrong tripod head with me so that nothing fits on my tripod. 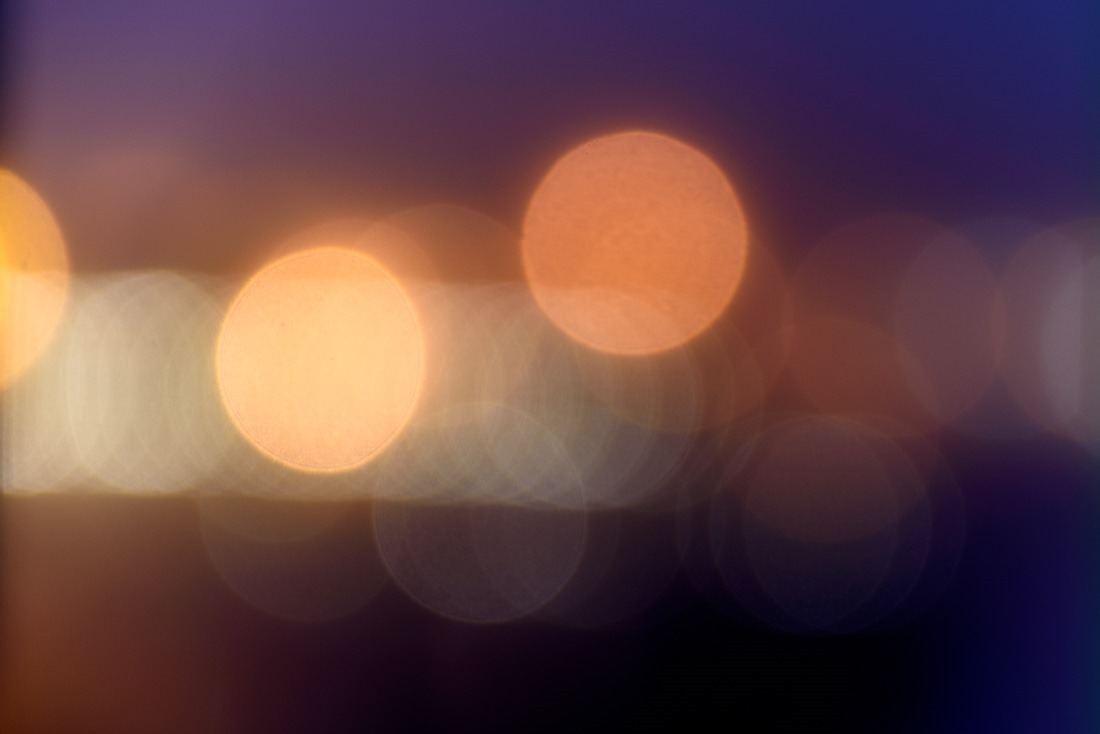 Preparation is everything for this type of outing. There is barely any way to get good shots if you have no tripod. The main picture of this post may simply be an exception. This was a handheld shot at 1/10th of a second, but with a (for me) ridiculously high ISO of 8000. Needless to say that this shot needed some noise reduction to look presentable. 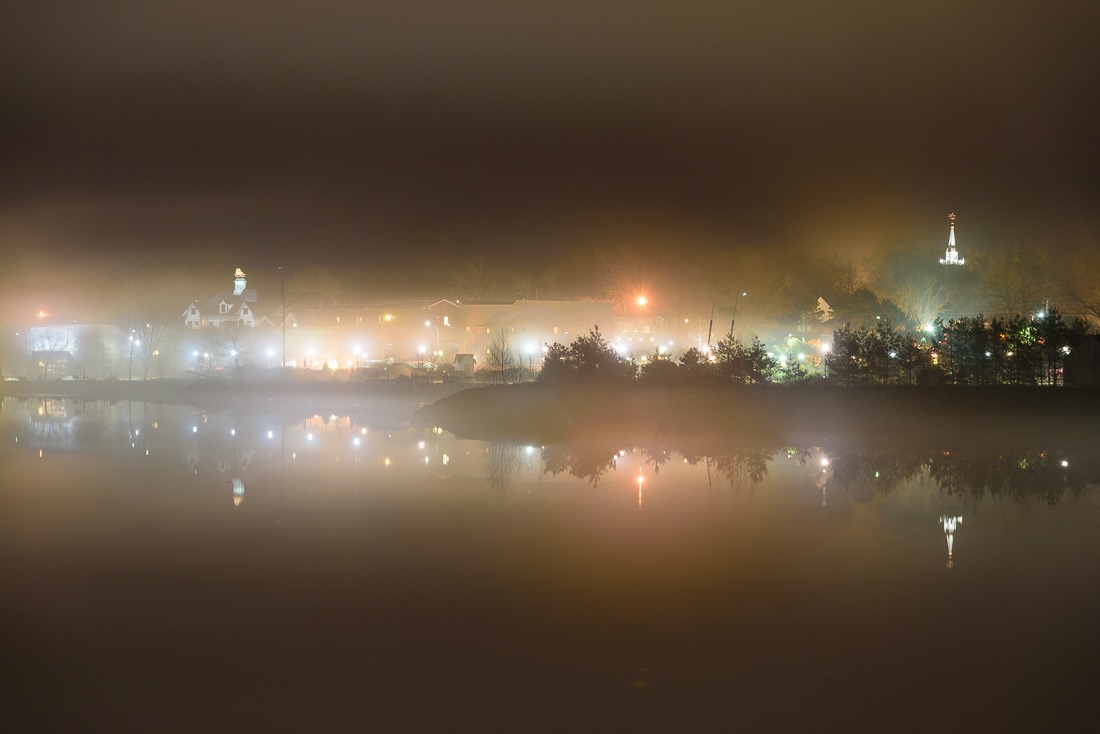 The Liverpool skyline by night

However, the Nikon D750 is very capable at these settings. I might even try some more of this one of these nights. Being in a small town in the night is very different from a city. In a city there are plenty of possibilities to put down your camera on a stable surface and get a decent shot. Often you’d need to straighten the picture, but that would be all. 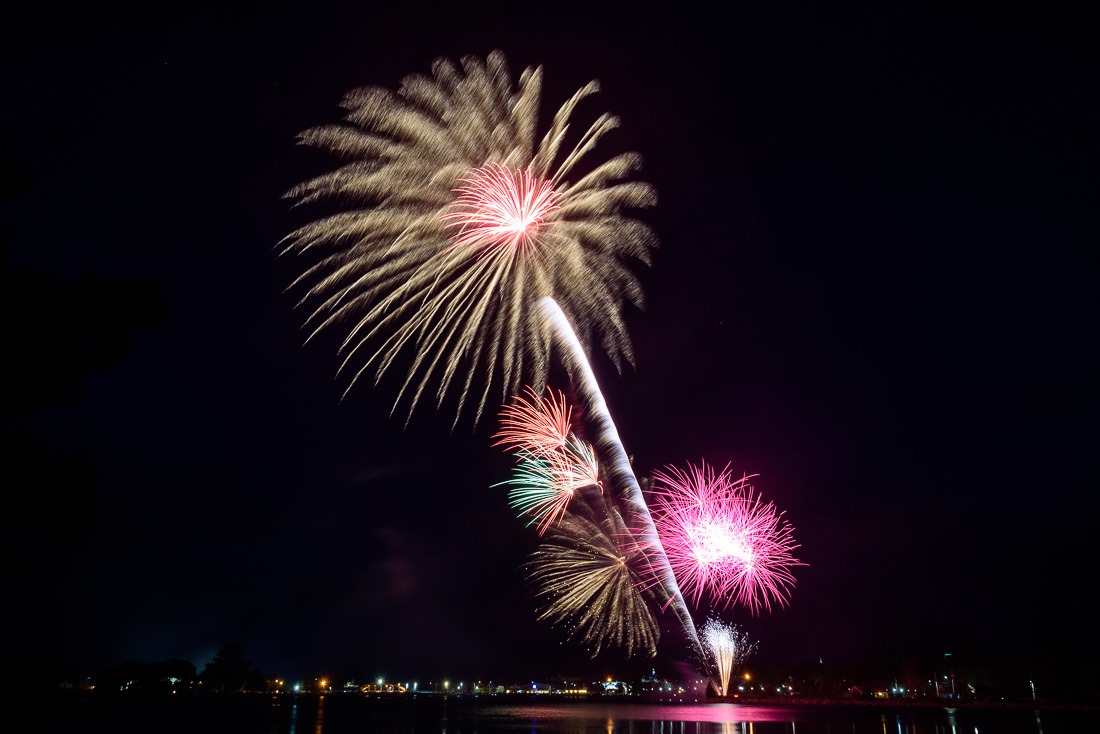 Here, I most definitely need a tripod. I’m not even talking about star shooting here. There are not enough structures, fenceposts etc. to put my camera on. Tree stumps are usually not stable enough either. Fireworks tolerate no shaky hands. Any movement of the camera will ruin the shot. 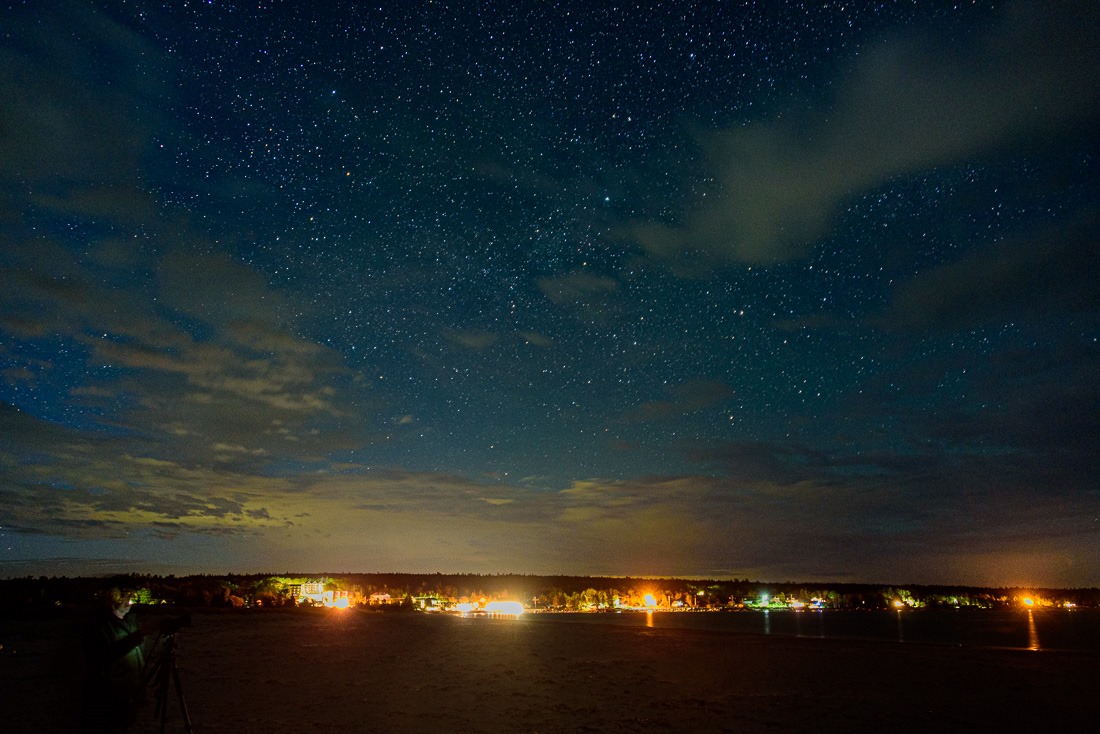 Star shots, like here on Summerville Beach require the shortest possible shutter speed and the most light possible. That usually translates to high ISO. Thirty seconds was what was required here. The stars hadn’t moved enough yet to show streaks instead of pin points in the sky. A little Lightroom “magic” to lighten up the sky and reduce the lights from the Quarterdeck Resort a bit and the picture is good for the public. 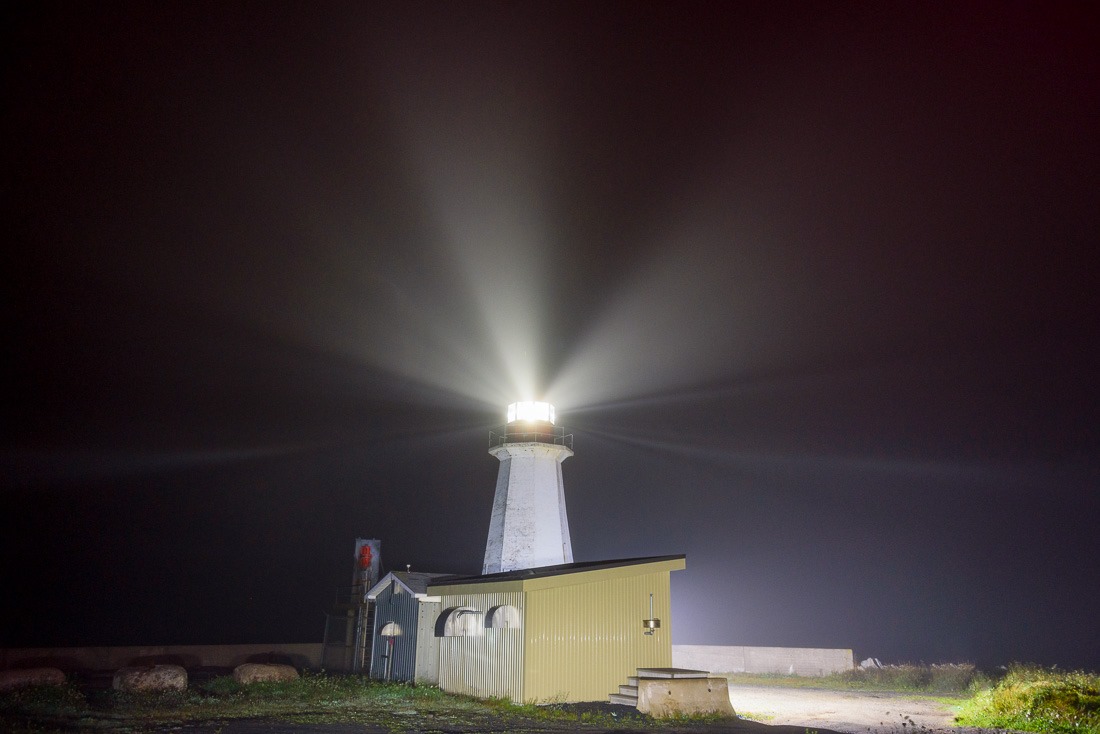 Dark nights for shooting are great, we usually want them clear and preferably not too cold, right? Well, night and fog can also give fun results. The turning light of the lighthouse would have given a light structure like a mushroom. Covering the lens (with my hand!) for a few seconds during the long exposure allowed for the beams to appear. 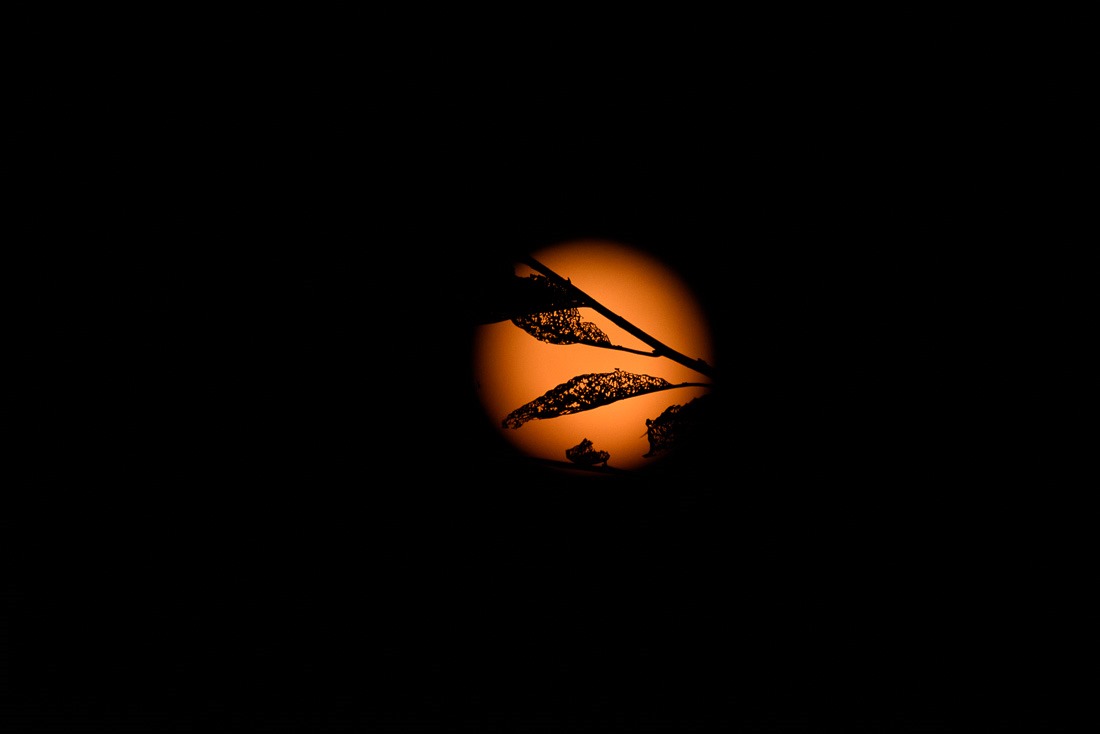 Moon shots are not to be forgotten either. Yet everyone and his/her dog has shots of the moon of some kind and not surprisingly, they all look alike. The moon only shows one side to earth and that’s all we ever get to see in our lifetimes. So when I was shooting with a 600mm to get a shot of the Harvest moon, my eye fell on some eaten leaves in a tree. Can you spot the spider on the leaf? 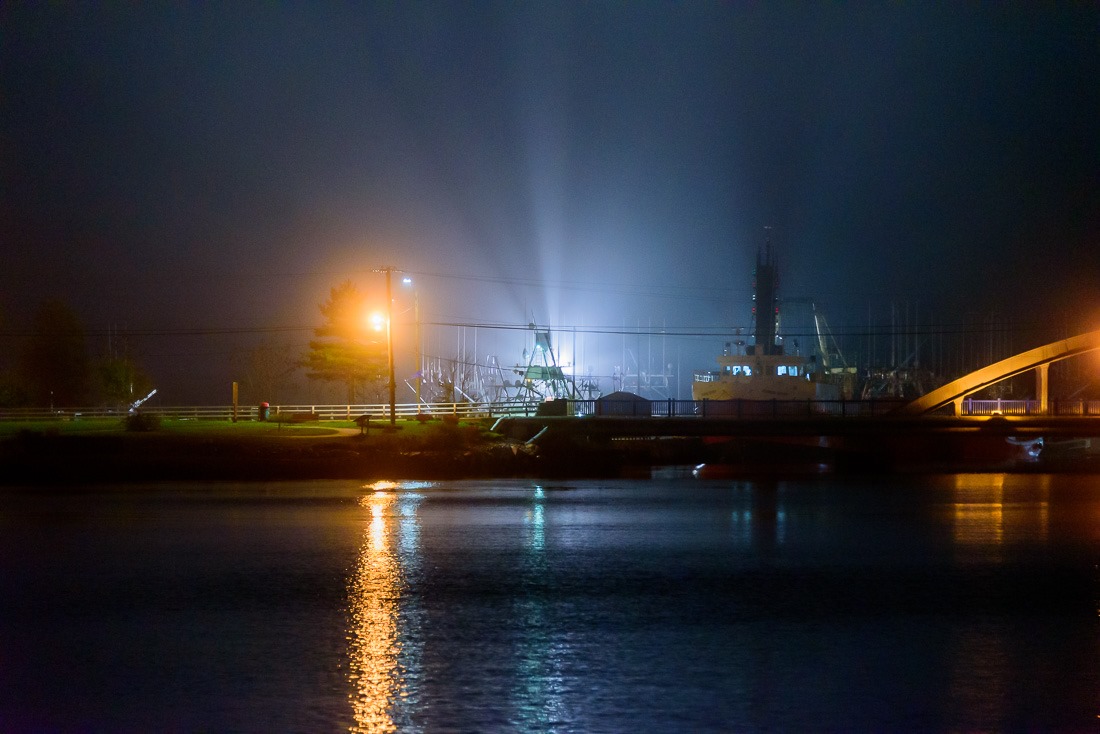 When out for another walk in town, some fog rolled in and made for the ships’ lights to present streaks of shadow through it. No way I can resist that kind of shot! Again, at fairly high ISO (8000 again), but with enough light in the picture, the noise is kept to a minimum. 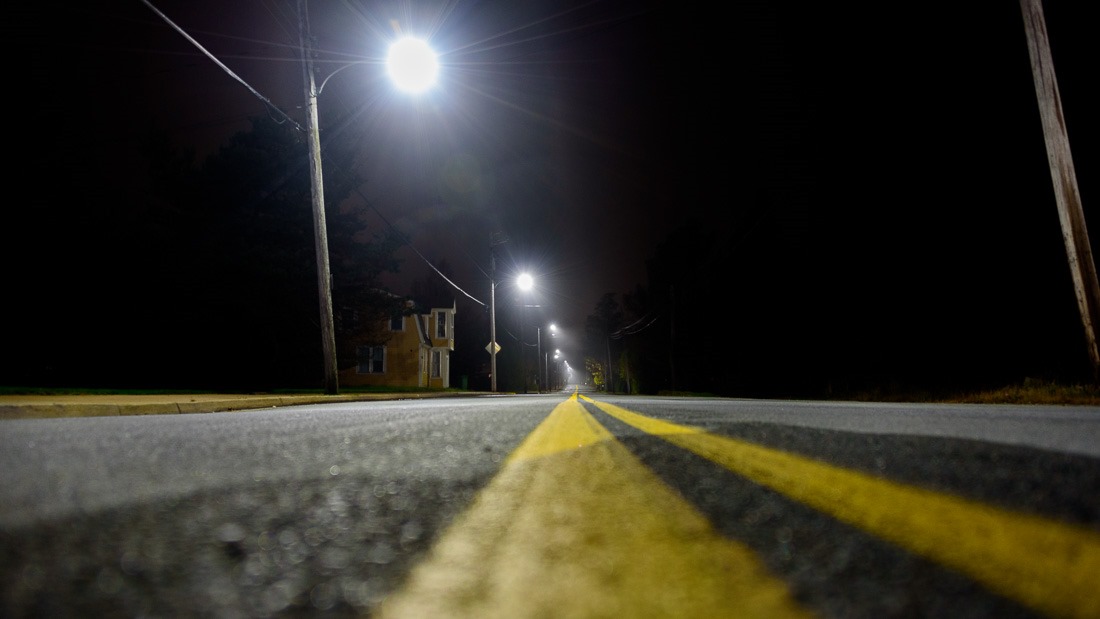 The above shot was a bit more “challenging”. While it looks like an easy shot, it was on a surprisingly busy road at 11:50PM. Every time I had the camera set up, I could hear the noise of a car in the distance. No way to get a 10 second shutter speed like that. On top of that, this road seems to attract all kinds of race cars in the night. Ten seconds is way too long to leave the camera alone in the middle of the road…

Nightly activities. There are plenty to be had, you just have to get out of the house before going to bed. Oh, and don’t forget your camera