The south-western part of the Whiteshell Provincial Park in Manitoba has a huge collection of petroforms. The petroforms found here encompass all styles found anywhere else in North America. The human forms, animals and geometric forms can be found in many places, but never all in the same place. 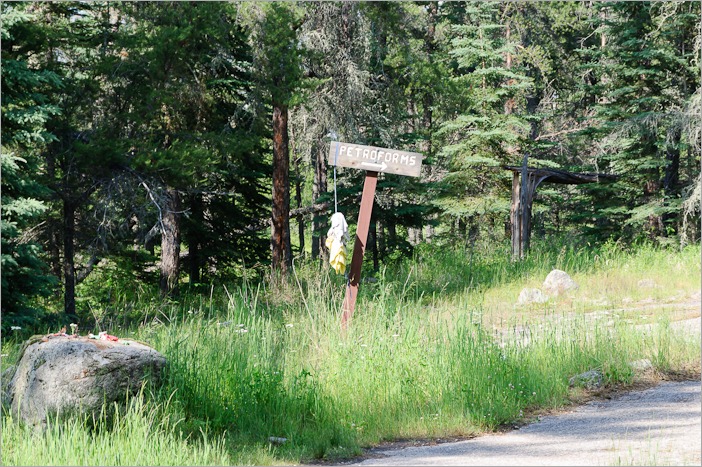 That makes us think that the origin of the petroforms lies in the Whiteshell Park and the art of it has moved outwards from here over the continent… Would it be that this place is even more special than all the other places where the petroforms are found? That seems very likely, some signs point to this.

The Anishinabe today still hold the place in high respect, consider it sacred. This was the place where the first human was lowered onto the earth by the Creator. In other words, a type of Garden of Eden. No wonder it is still sacred.

When I walked here myself I found the place was filled with some kind of mystery, as if someone or something was trying to tell me something. No, it’s not as if I had been reading too many ghost stories in my life. This was a feeling, not some trained reaction to a certain place. 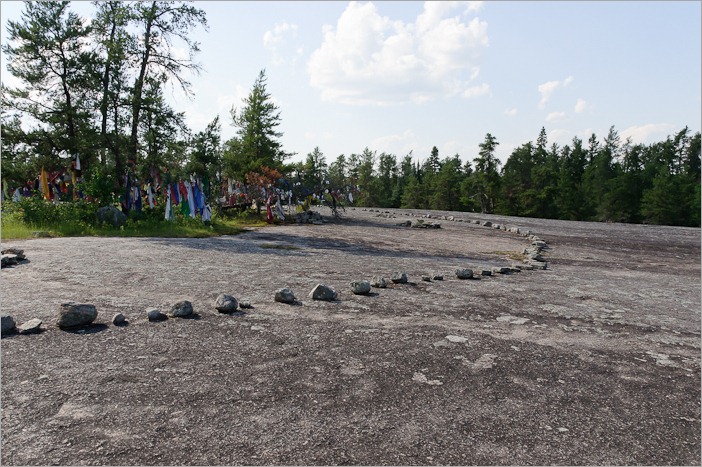 The biggest place surrounded by stones is a bit off the center of the other petroforms. In its center is a small copse of trees which are filled with pieces of cloth. Not the usual type of leaves on these trees, that’s for sure. A closer look reveals that these pieces of cloth are tightly hung from the trees’ branches, so they will not be blown away. 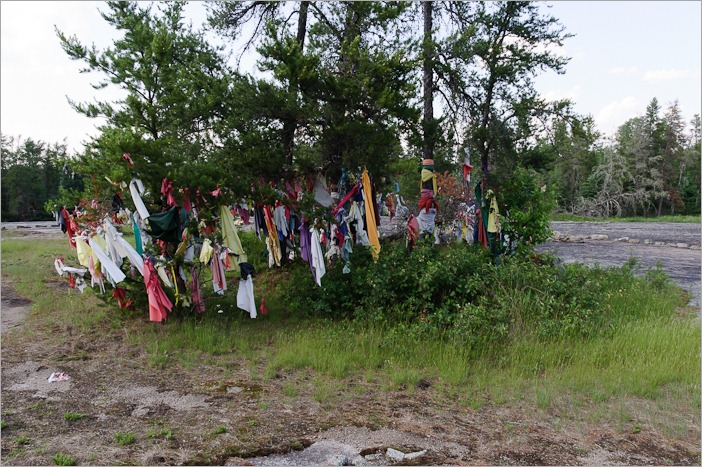 The pieces of cloth are offerings to the spirit, colourful and gay. They are not used t-shirts, I checked that a bit closer. To get a look at all this, you need to be careful not to step on any stones and move them around. As said, please respect this place as if it were your own place of worship. 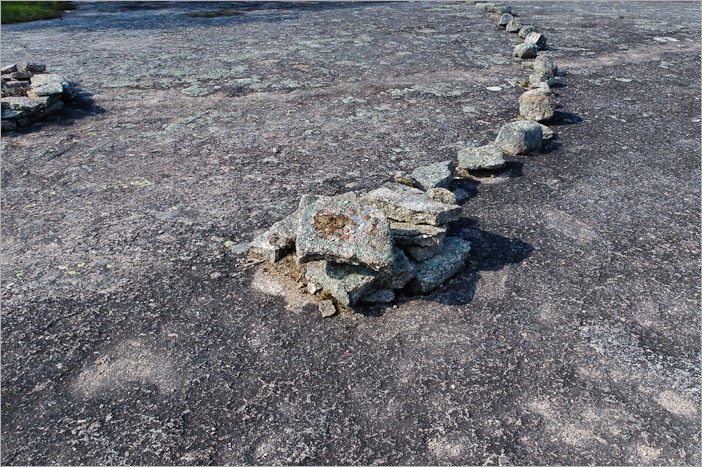 Offerings at an entrance into the circle of stones

Offerings of money, albeit only pennies, nickels and dimes, polished shells or even the ever-present vest-button are laid down on every important part of the petroform. 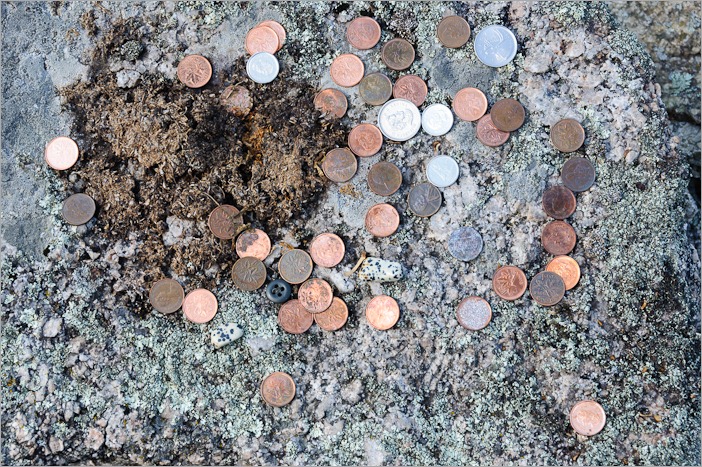 In the picture above you can see the money, but also tobacco is part of the offerings. Tobacco is a way of facilitating the passing of the spirit from one world to another. Also, observe the pieces of bone or polished stones. One of the pennies has some crystal-like stuff on it. So apparently these offerings have more meaning than just being a bit of money placed on a stone. 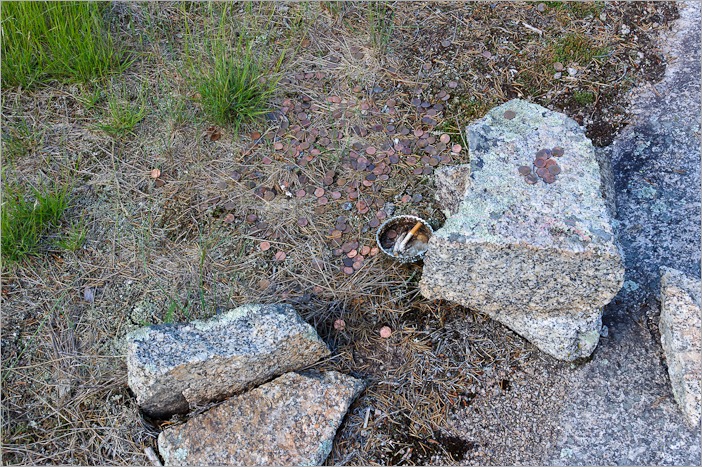 Some places are used to make fires, they are clearly visible inside the great circle of stones where we find ourselves. It may seem childish, but for myself I didn’t want to wander around too much in this sacred place where I had no idea of where I was putting my feet. Not only out of respect for the age of the place. 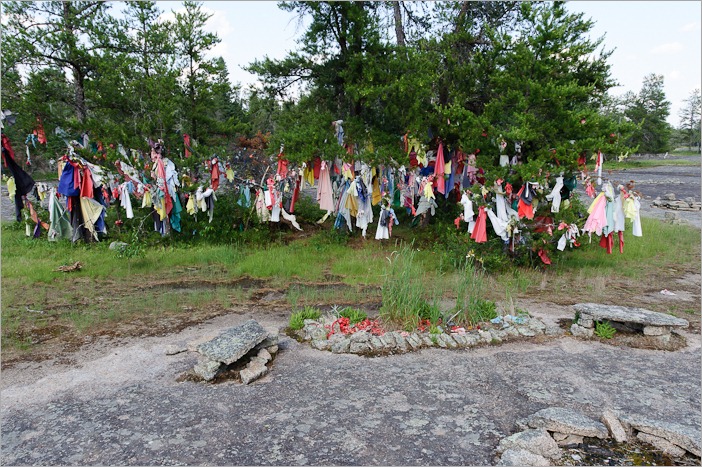 In the center, the pieces of cloth are softly swaying in the wind. Everything around is quiet, except for a few birds. Perhaps these birds are the voices of the spirits that are trying to communicate with us, or is it the soft rustling of the wind itself? Obviously my mind is not attuned to this kind of communication.

I hesitate to compare this with our Christian churches, as not to do injustice to this place. The above picture looks to me like an altar on which offerings are made to the spirits. The front circle of stones contains ashes from previous fires. This must be a place where people come together and listen to the interpreter of the spirits. 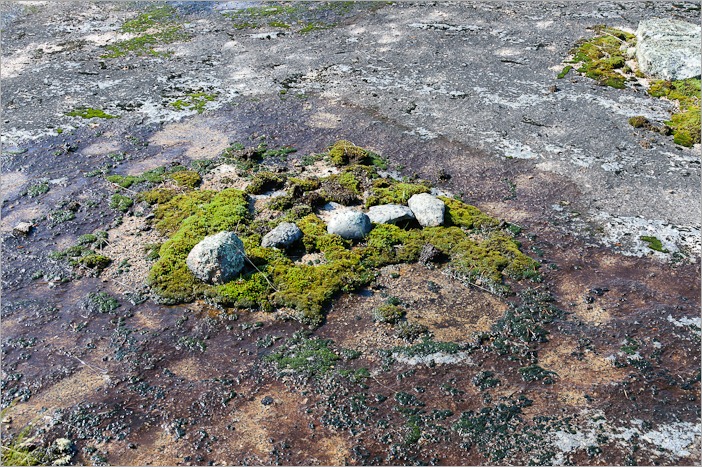 Whichever way you think of it, the petroforms at Bannock Point in the Whiteshell must have some kind of protection from the spirits. It seems unthinkable that simply placed stones on a slab of rock can stay in place for more than 1500 years, without being disturbed, even by white men. 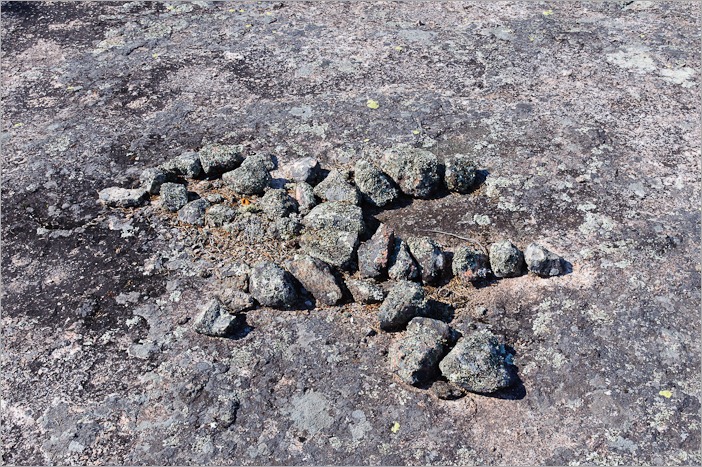 How did we get to 1500 years? Well, at a different place in the Whiteshell Park, other petroforms were found near a small First Nations settlement.  Excavation of that site revealed pottery and other artefacts datable to around 500 A.D. Nothing tells us that the stones at Bannock Point are of the same period. They could be thousands of years older.

As far as I’m concerned, let’s leave this place in peace, and let the spirits roam here freely. After all, they were here first.