The time has come to say goodbye to summer. The fall colours are here to (not) stay and soon we’ll be in a season that lends itself to black and white photography. Summer is on the rocks, it seems. So rocks it what I can cling to to keep a little of this summer for myself. 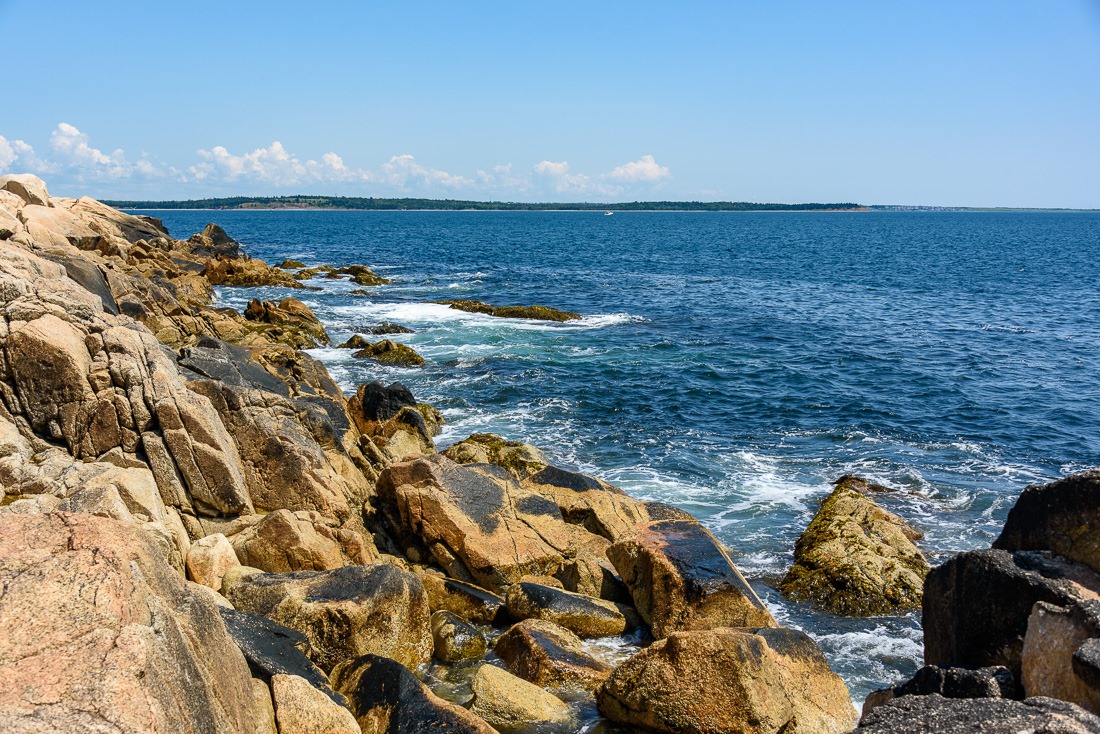 Is it all that gloomy? Nah, not in the least. Here in Nova Scotia, things are different than on the prairies.

For one, everything is green here, there are no places that didn’t get any rain for more than a few weeks. The summers on the prairie could be (and still are) kind of… dry. It makes for nice dusty pictures, I have posted enough of those on this blog in the past few years. 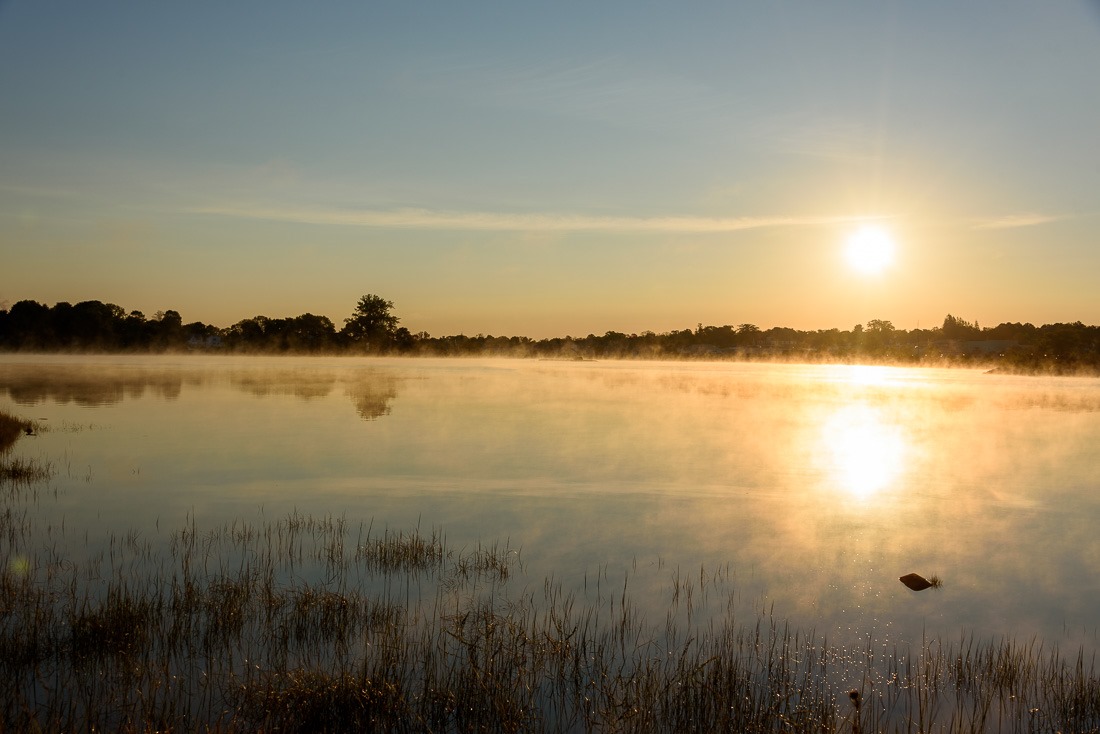 But now is the time to make you thirsty with some non-potable water instead. When the sun rises here in Liverpool, often the high tide is pushing the river back inland. It brings salt water with it, making it not ideal for consumption. As you can see in the above photo, marsh land is not very far away either. 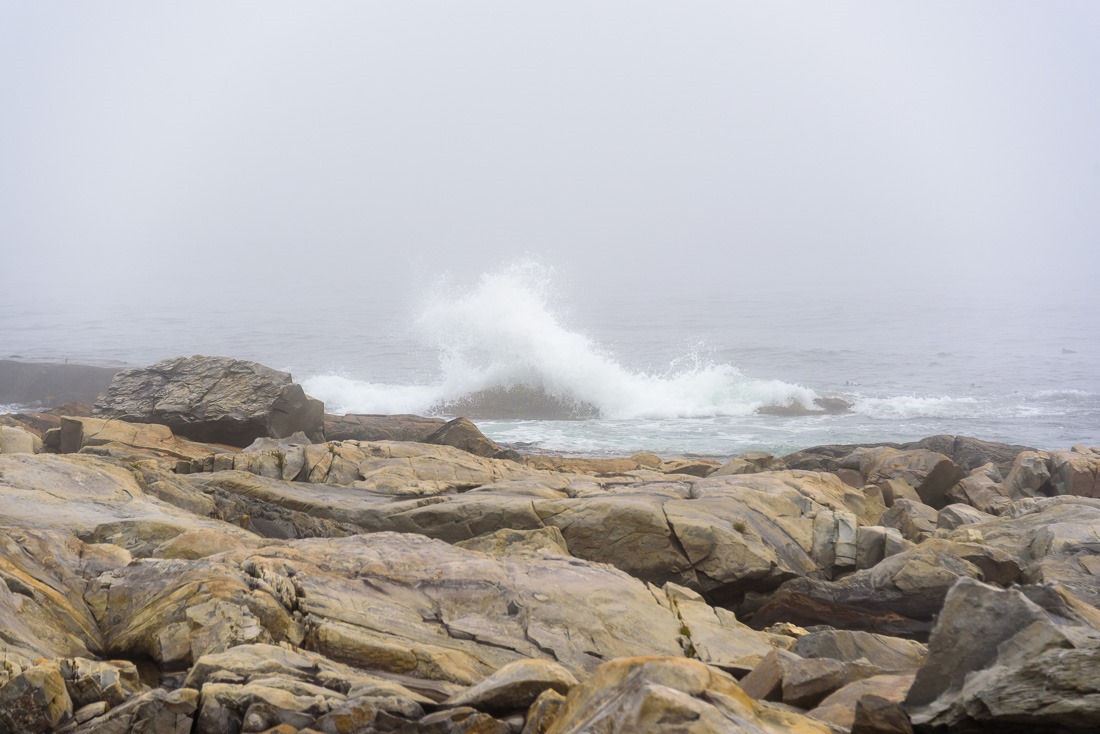 But where it really comes crashing down is on those rocks. In Peggy’s Cove, there are signs to never venture out on the black rocks, as rogue waves can (and will) come in to swoop you away into the depths of the Atlantic. Even more so if the winds are a little more than a slight breeze. Fog also is often enough on the menu with the changing seasons. Warmer water and cool air allow for mist to form, low-hanging clouds make up for the rest. 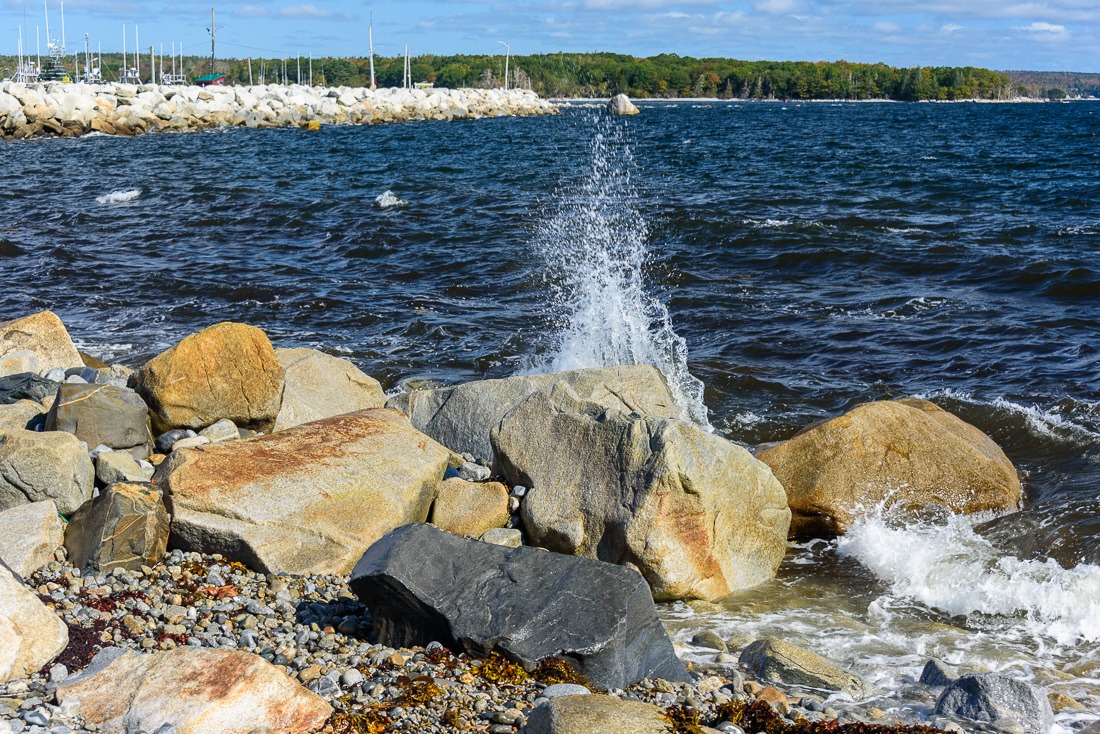 But a little wind and sunshine chase that fog away. Rocks are there to protect us, it seems. Well, whenever man has needed rocks for that. All the other rocks were just there, conveniently. Rocks and water also collide, giving nice splashes. I haven’t witnessed a big storm here just yet, but hey, they will most certainly come one of these days. 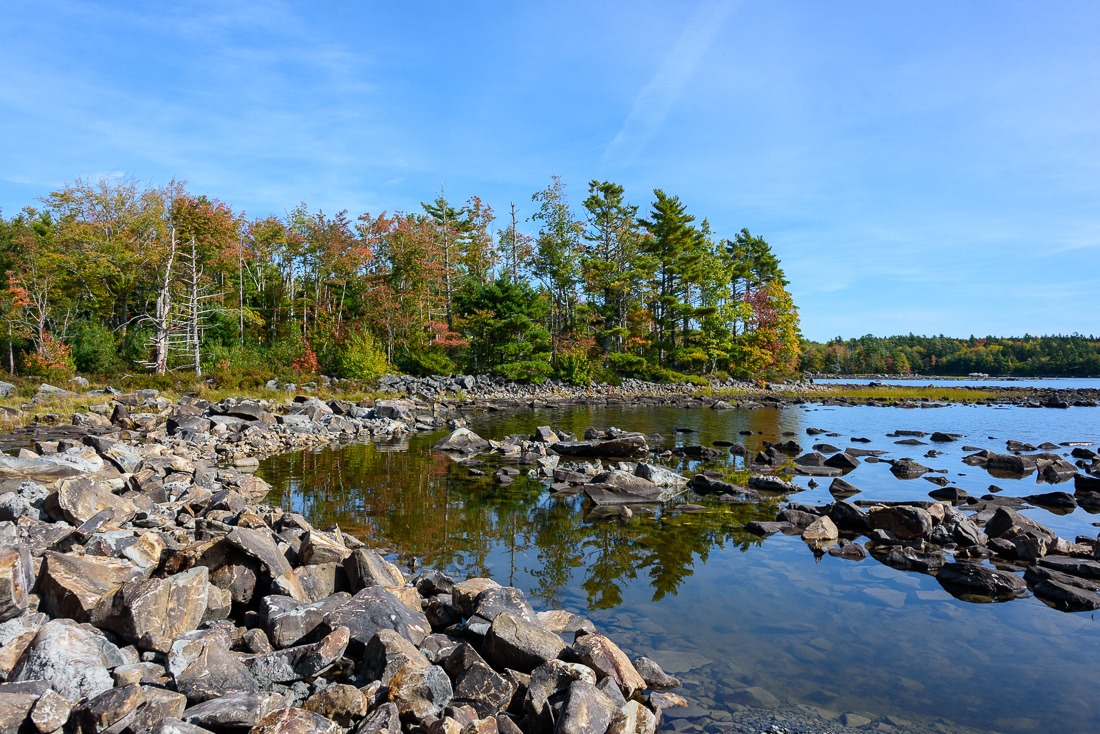 Lakes have rocks too, just no crashing waves. To make those rocks more appealing, you need fall colours. So here, I found a few, just starting to pop.. 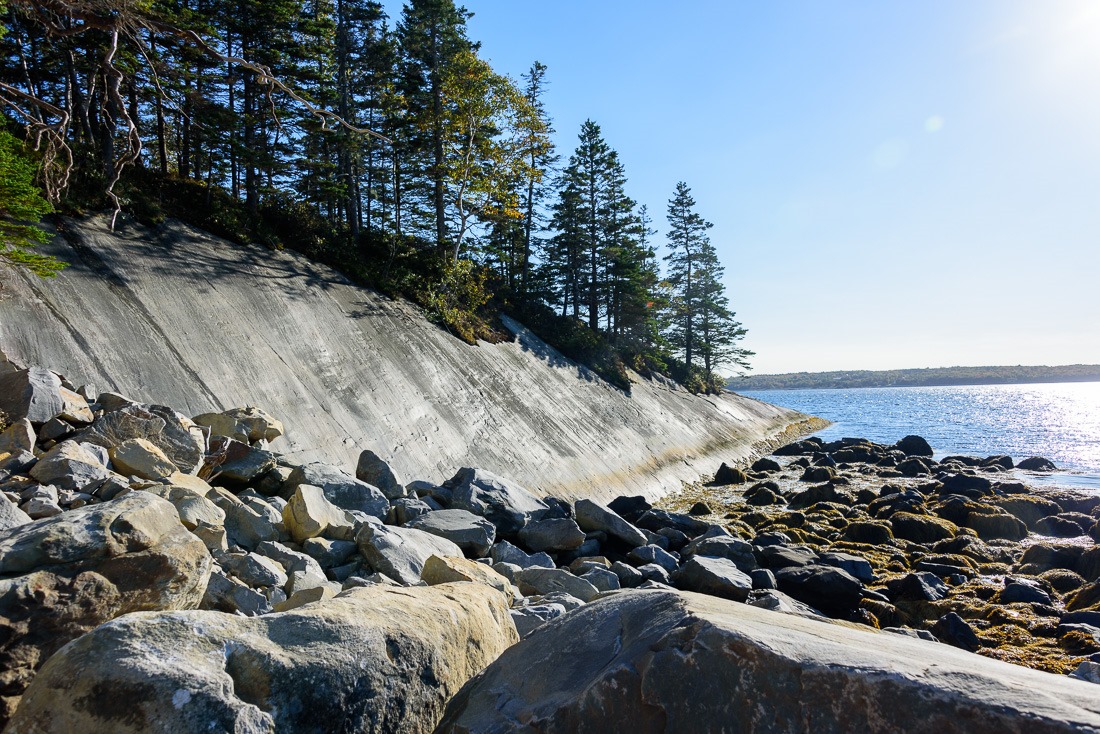 Nova Scotia has a tumultuous geological history. Partly volcanic without volcanoes and partly upheaval from sediment. The resulting rock formations are often broken up by the sea. The above wall of stone has been carved out for eons. Whatever grows on top of that will eventually come down and be swallowed by the sea. 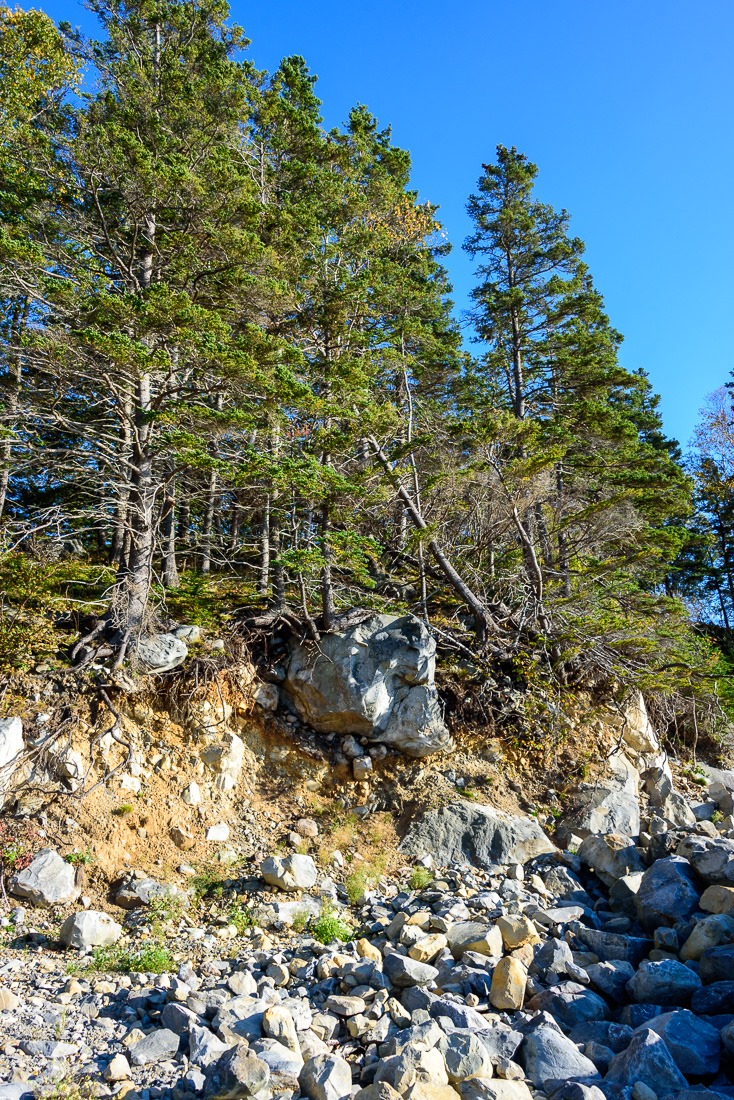 A matter of time

Just have a look at these trees, close by the previous rock wall. It’s not going to be very long (a few decades at most) before these trees are feeding fish and plankton. The reaming material will go down to the bottom of the ocean, only to perhaps form oil in a few million years. It’s easy to speculate on that one when we will not be around to witness that. 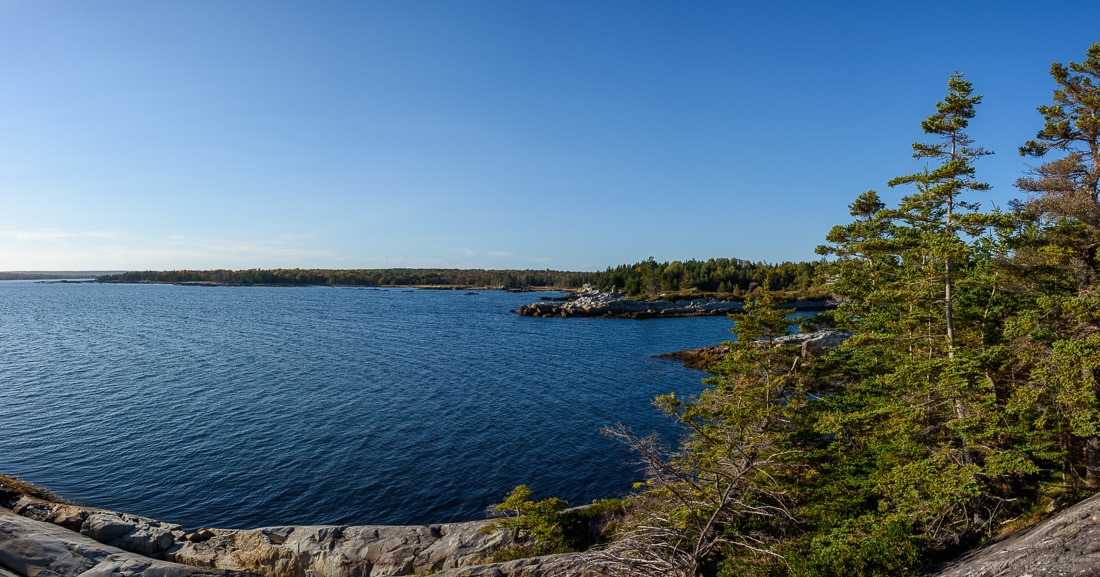 Rocks and water, what a peaceful sight. Yet it can hide so much violence that your ears could hurt. If you get too close, it could even kill you, in the right/wrong circumstances. But hey, I am not going to tell you what to do and not to do if you ever decide to visit Nova Scotia. Just know that there are risks for normal people and other risks for tourists. Let’s not talk about photographers…