Pictures in the dark often reveal more than the darkness can hold back. The mood is different from the same shots during daytime. Over the years I have taken quite a few nighttime shots. Identifying them all was a bit of a hassle, but I found a way. 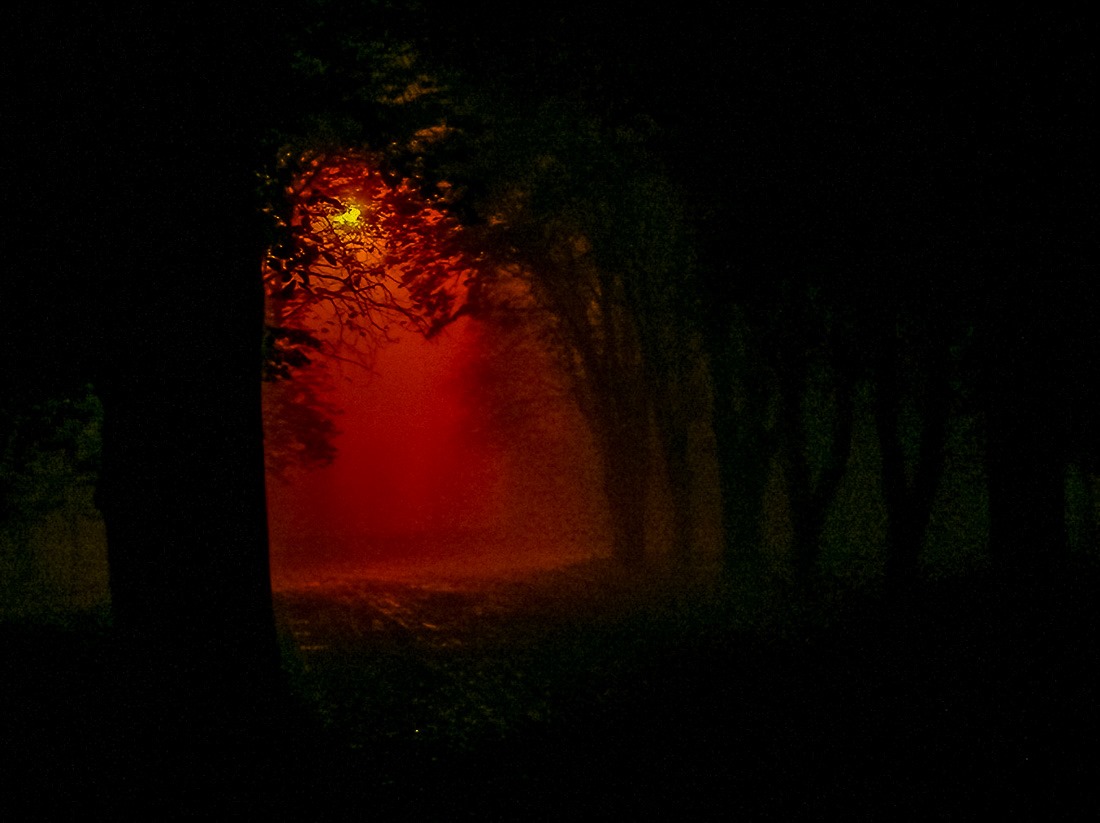 Or at least a Lightroom plugin found a way. It found around 7000 pictures that were shot between 10pm and 7am. Most of them were night shots.

Most of them… plenty were shot in Europe, with a different time zone that was not corrected at the time. So after removing the biggest part of those, I still ended up with 5000 shots made during the wee hours of the night. 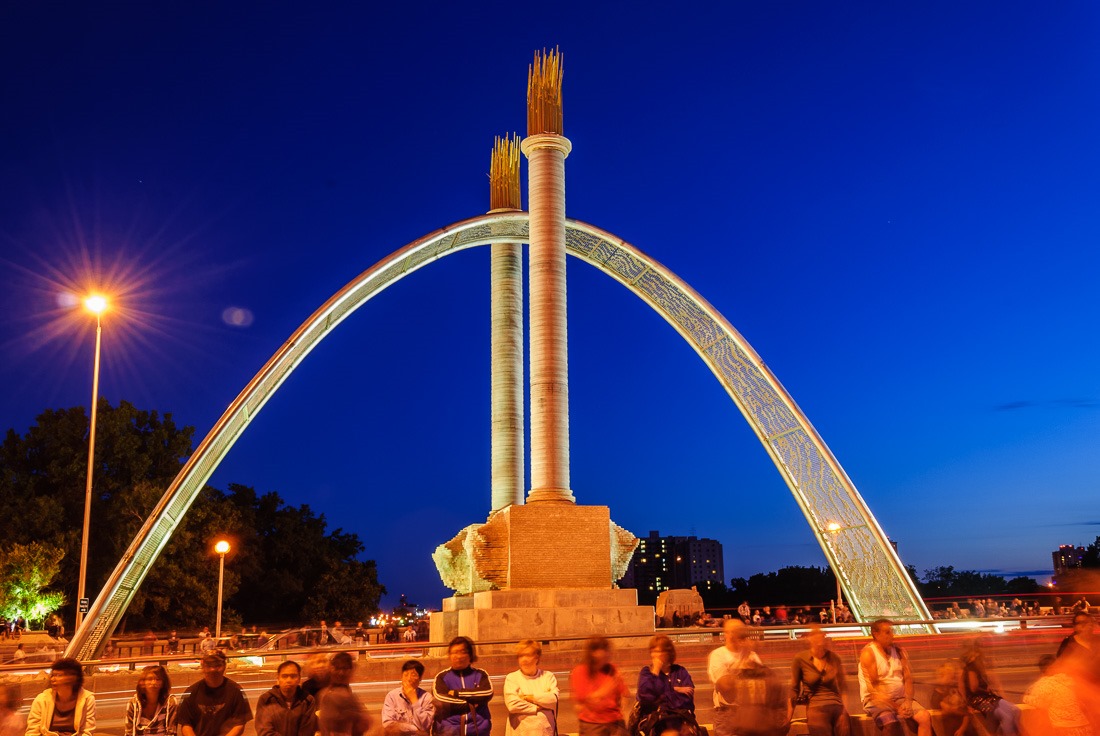 Plenty of them are for star trails so a few series of 600-700 pictures can be eliminated as being for one single picture, but still, this is a considerable number. The only shot that was not taken on a tripod was the lead picture of this post. On the same night as the “Lenin in the mist” shot (now historical, as the statue has been removed), I didn’t have a tripod. Yet with the quantity of vodka coursing my veins, I still had enough working braincells left to stabilise the camera against a tree… 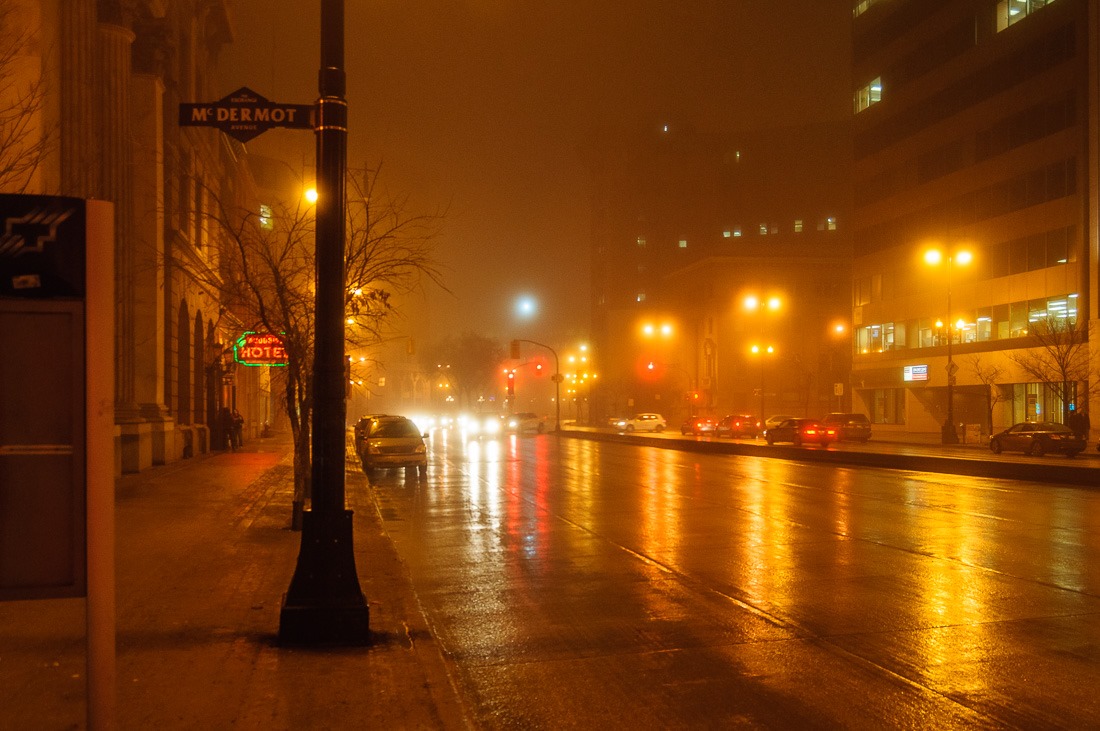 The bulk of my night shots was taken here in Manitoba, though. Having a group of friends like the Manitoba Foto Friends makes a big difference in getting all kinds of (weird

) shots. Going out with a group of people is always nicer than going out alone. On top of that, you can try to one-up each other into doing more complicated or crazier stuff. Things one would never do all alone. 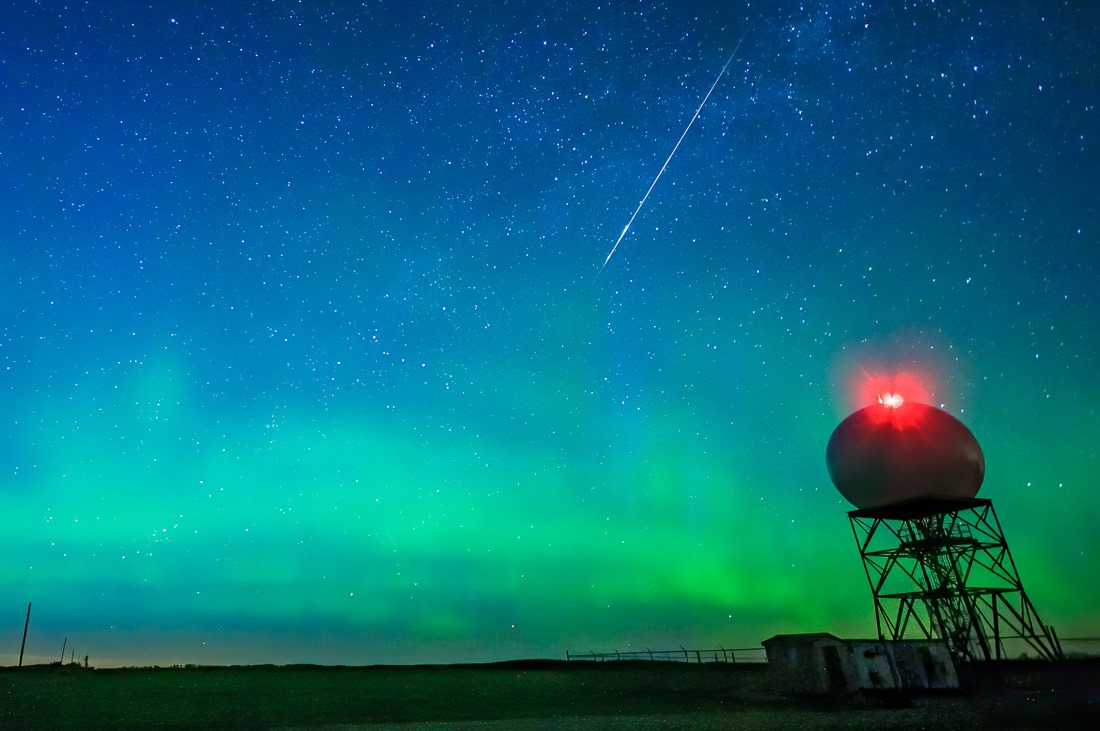 On one of these outings I caught a meteorite in my aurora shot. I only noticed that days later when I went to download them onto my computer. The big ball here is the Woodlands weather radar in Manitoba. One of my favourite subjects in the night is the Aurora. Whenever there is a forecast for aurora, I am willing to go outside, brave the cold or even the mosquitoes to get a good shot of them. I could fill a small book with all my aurora shots by now. 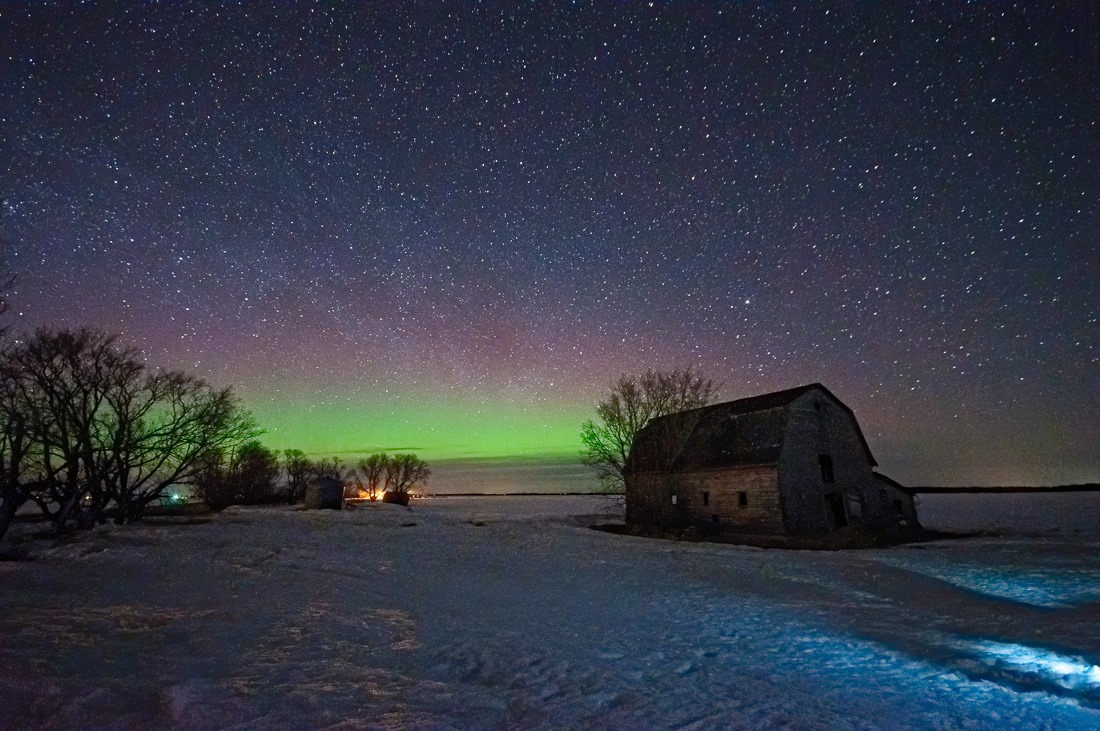 Yet the best memories of taking those shots must be the a group of friends I went out with every time. Even if the aurora was kind of “disappointing” in strength, the evenings with friends were always great. Those who were there will recognise the shots as we all will have something similar in our collections. 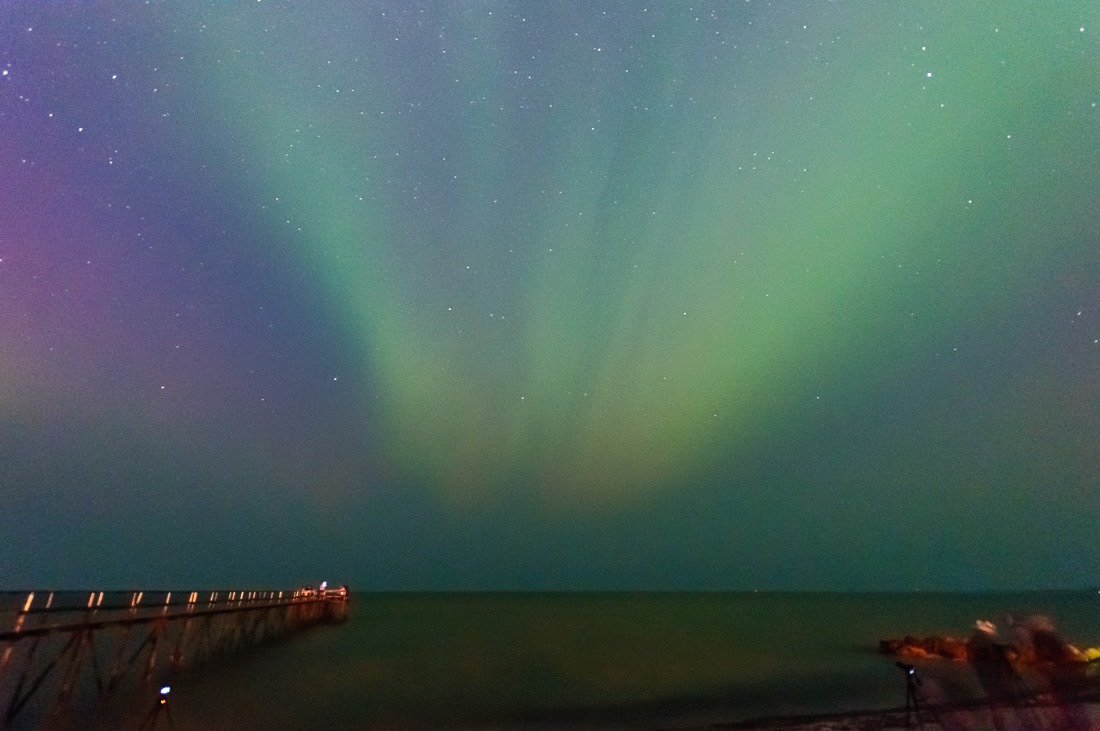 Lights over Lake Winnipeg in Matlock

Different places, different foregrounds and most certainly different auroras. Some would insist on aurorae, but I am no longer a purist with that. In Europe they do insist on the correct Latin plural of the word, though

. Auroras can take many different forms and shapes, even colours. But they all have one thing in common, they are awesome to everyone who is observing them. 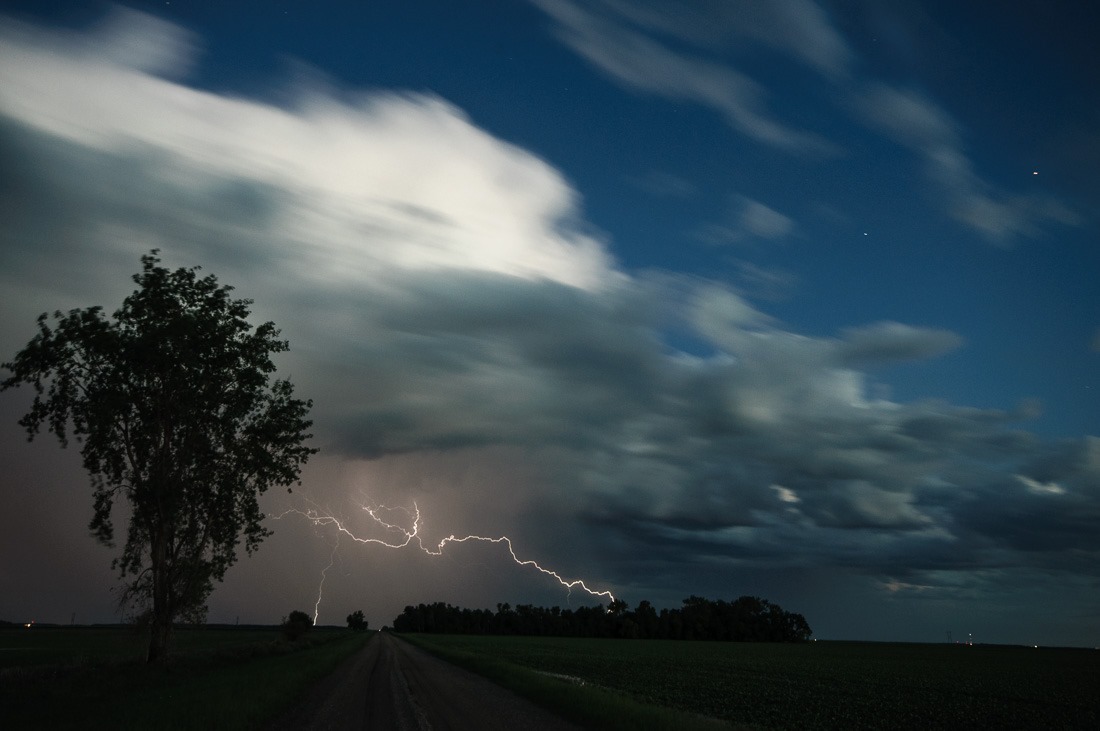 But the night can hold more than auroras. Thunderstorms are another of my favourite subjects. Even more so when the storms occur during the first hours of the darkness in the evening. It gives a little bit of blue sky, a very deep blue, the clouds may still be lit by the sun rays high up in the atmosphere and the lightning below the storms is in a fairly dark background. In the above shot you can distinguish stars outside of the storm system. 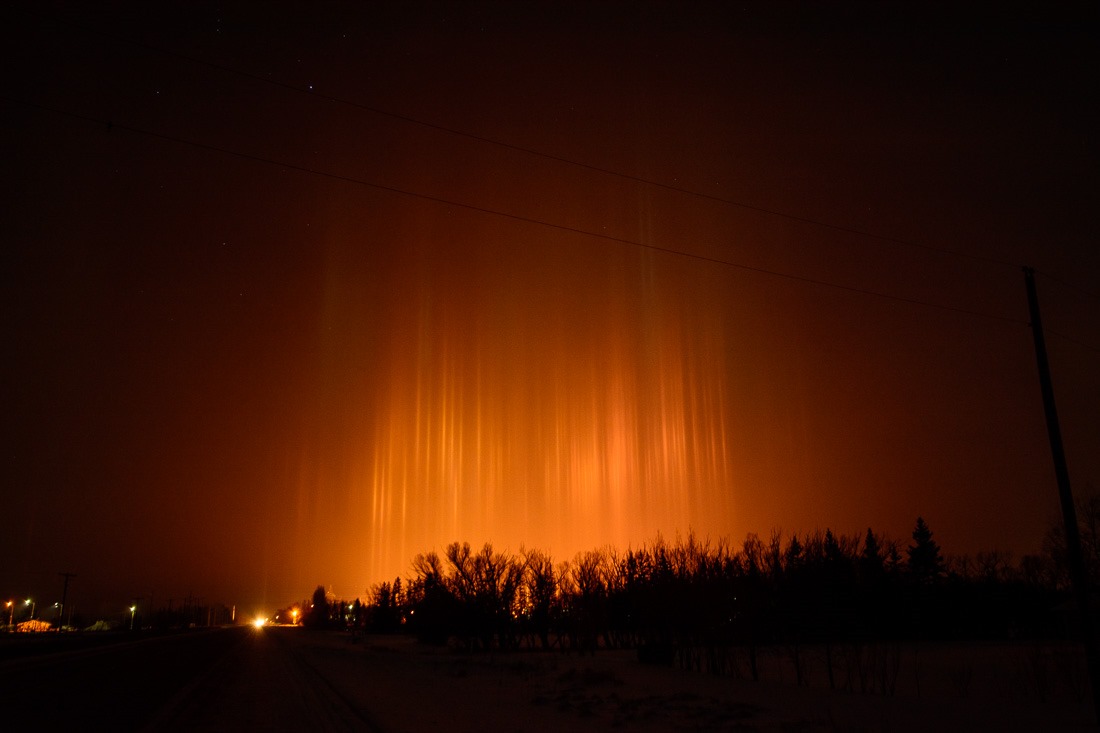 And if thunderstorms and aurora were all, then I’d have it all, but no, there are more surprises in the nocturnal atmosphere. When the cold is harsh, with temperatures around –30C (-22F), ice crystals may just line up together and reflect any light coming from the ground. Be that headlights of cars, trains, streetlights or yard lights. Any bright light will do. The above shot was from the Riel Substation, close to Winnipeg. Manitoba Hydro is responsible for this one, with hundreds of sodium lights lighting up the premises. From far enough away (behind trees), only the ice crystals showed. If this would have been possible a mere 200 years ago, people would have run screaming in the streets, claiming the apocalypse was near. 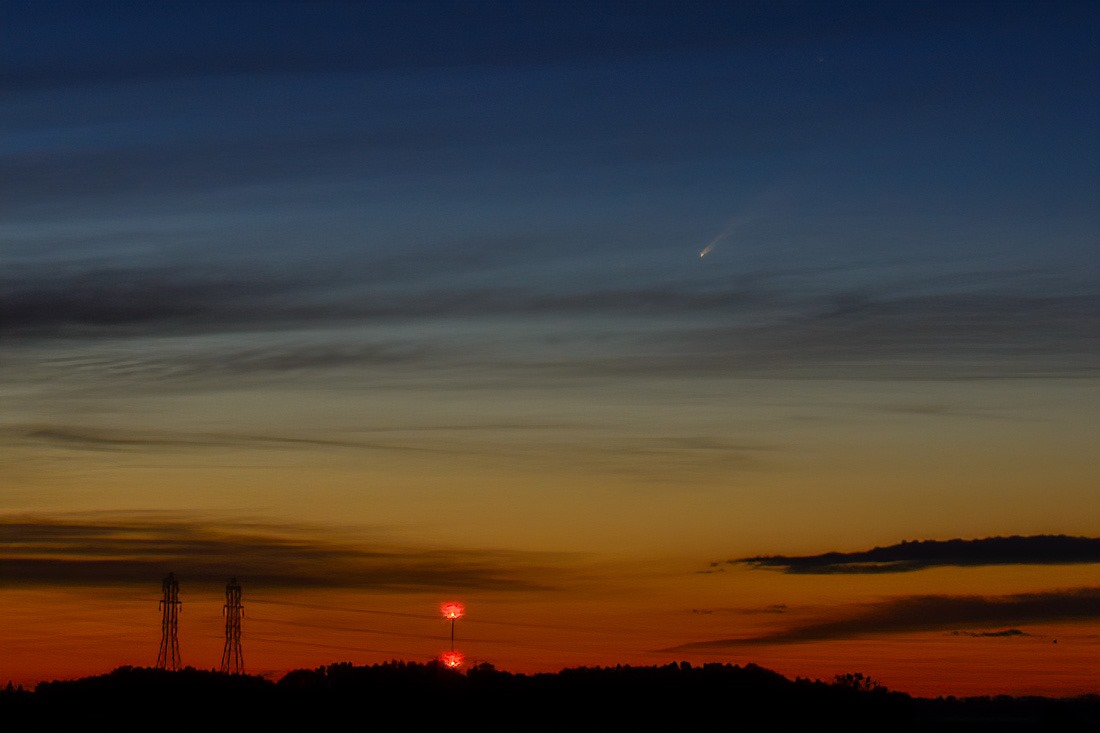 But there was no Manitoba Hydro, or even electricity to create this phenomenon a few hundred years ago. What was there, on the other hand, were comets. Comets were often regarded as bad omens, prophesizing the end was near, or even the birth of an important person. Today, people simply look up in the sky, photograph the comet and go on with their lives. Nothing bad in perspective, or nothing good. This year has brought plenty of nastiness with it, and it’s not even over yet, comet or no comet. 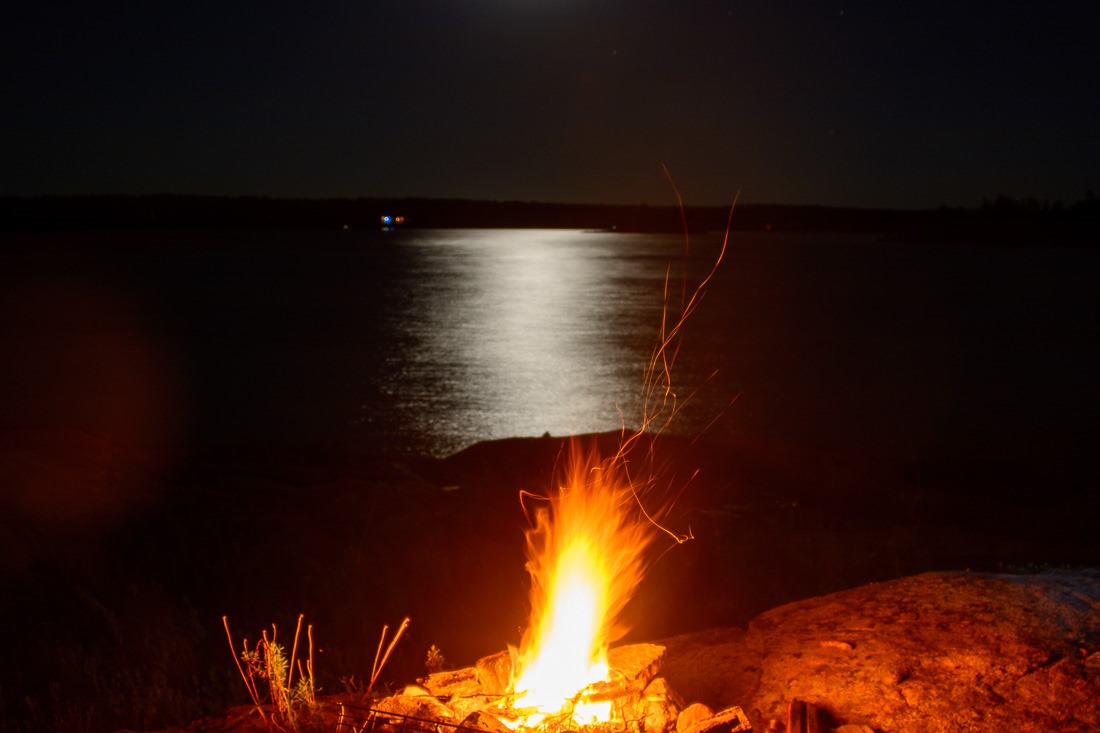 So there is only one thing to do for now. Enjoy a warm campfire on the rocks. Cook some bacon, eggs and potatoes on it and the evening will be comfortable. The best way to end a day, I’d say.

If the night seems dark and impregnable to you, find some likeminded friends and share that night with them. Things will look way better after dark with friends.