A weekend with a friend is more like it. Yet silence was a lot on the menu. It was time to take a break from the city’s noise and humdrum. The incessant sirens of emergency vehicles on business trips had started to work on my nerves. Even more when only for a short time you can sleep with your window open. That doesn’t happen much in this part of the world. 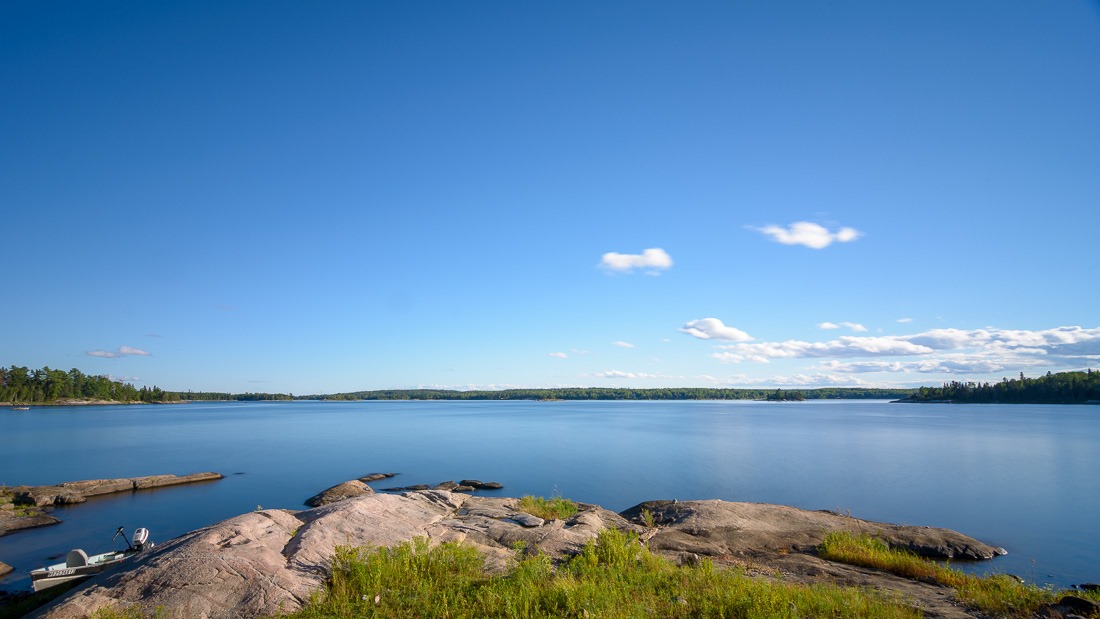 So when a friend of mine proposed to go fishing for the weekend, I thought I’d go for it. Yet my fishing is more with a camera than with a rod. To each his own, I’d say.

The trip was to be on the Winnipeg River, near Kenora in Ontario. It is in the “Unorganised Kenora” area. The Winnipeg River system is massive. The only certainty you think you have is that if you let yourself float long enough, you will end up in Lake Winnipeg, Manitoba. 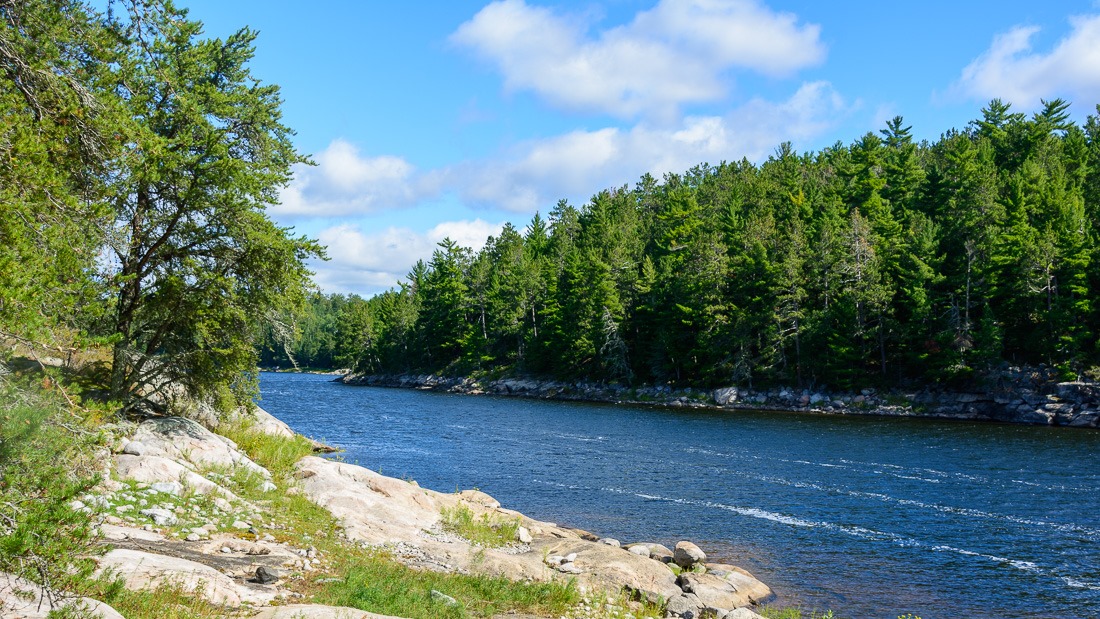 From our rock to Boudreau Island

As far as I can see, that might take a while if you start in Kenora. This was a first time for me to go camping in the wild, drinking water from the river and fishing for an evening meal. Since my fishing skills are null and non-existent, I had also brought a pack of sausages, eggs and some other odds and ends. Once we had arrived on an unnamed island, not that I don’t want to say where it is, it simply has no name, we set up the tent. 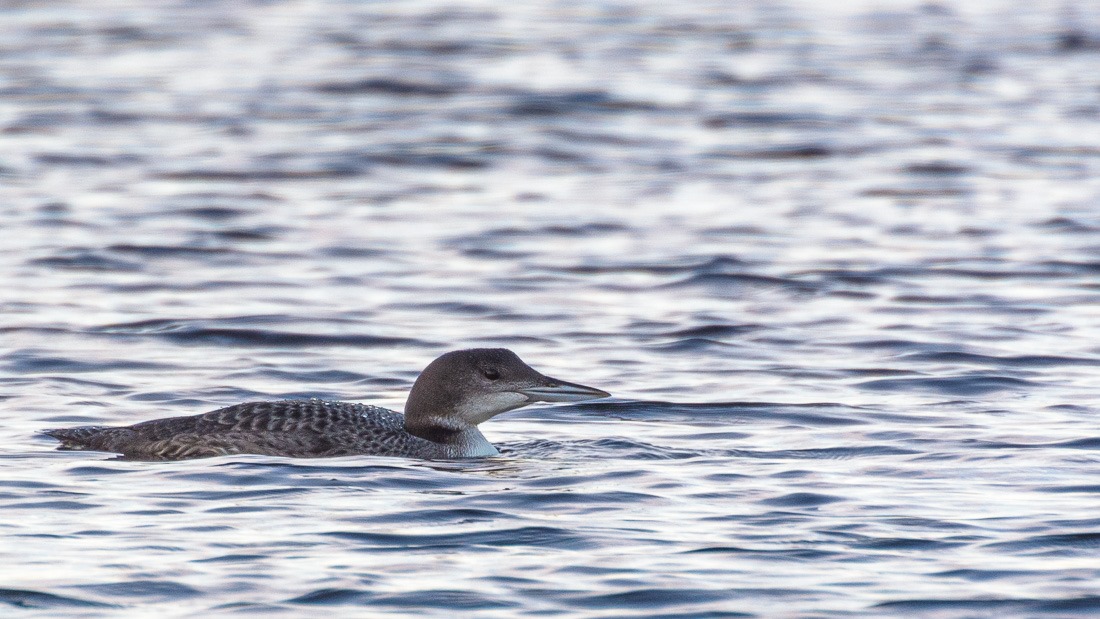 By the time we were done with that, darkness had set in and we were ready for a good night’s sleep. There was no sound during the night, except for some snoring. Early morning, though, the loons, gulls and eagles all put in an effort to wake us up. For those who are familiar with the sound of the Bald Eagle in Hollywood movies, they may not recognize it 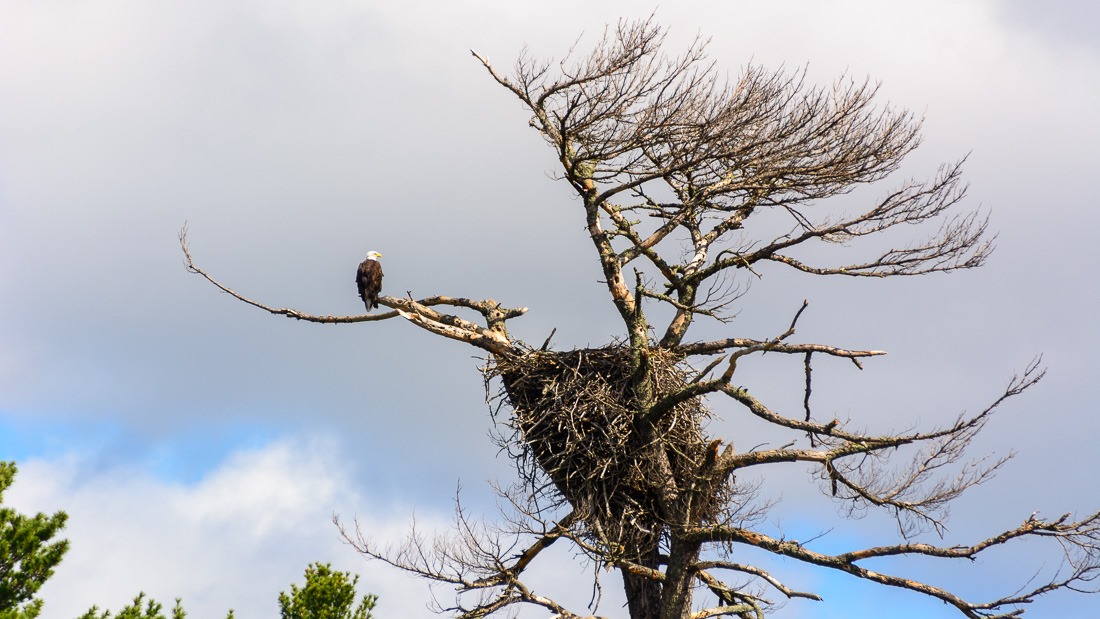 One of the parents on guard

The sound of the Bald Eagle is a high-pitched yapping, nothing like the drawn-out screech one can hear in the movies. That screech is usually from a Red-tailed Hawk. I bet most Americans don’t even know the sound of their national bird

. The eagles trying to wake us up were nesting a few hundred meters away on Boudreau Island. There was no way for me to check if there were any young in that nest, though. 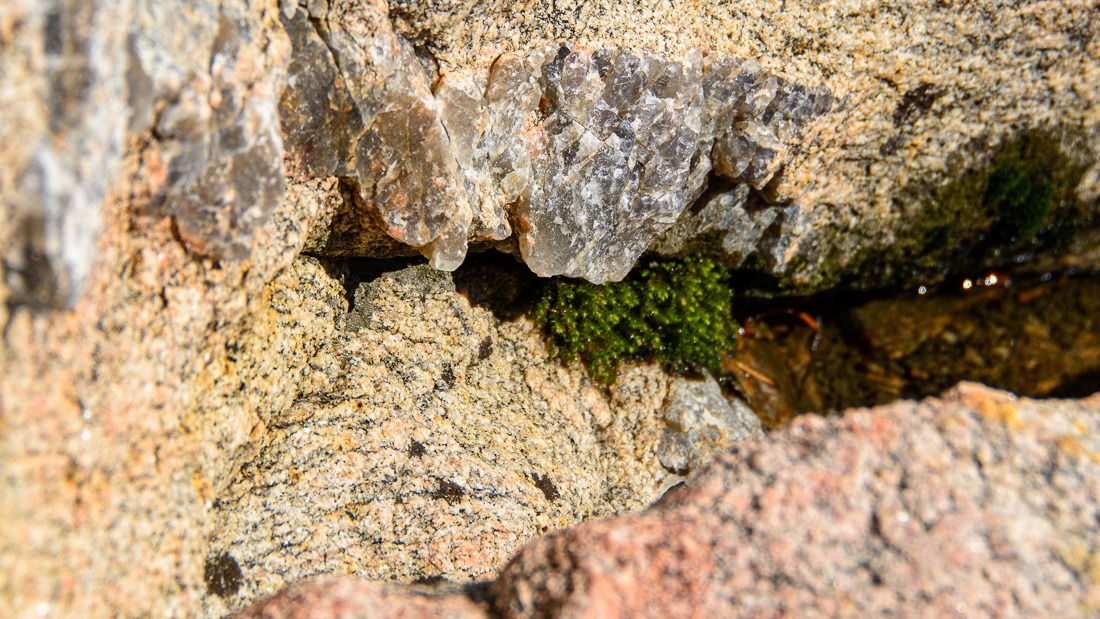 The area is full of rocks, both above and below the water level. It made me think that these rocks were quite old, somewhere in the 500 million years range. During that time, they have been moved, folded, crushed, heated and cooled, giving birth to all kinds of interesting crystal formations. Most of the crystal is simple quartz, but a bit further away, the crystals are amethyst. The only amethyst mine in North America is in Ontario. Photographed from certain angles, these formations may look enormous. 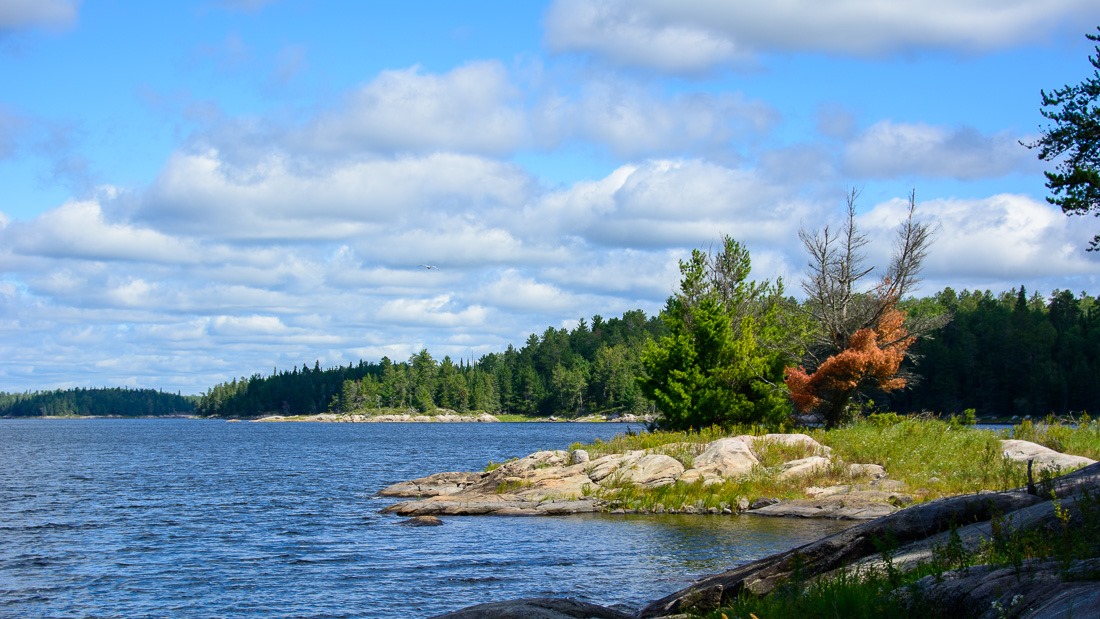 Around the island in 80 minutes

After a quick but filling breakfast of coffee, eggs and bacon we set out to discover the island we were on. As I said, it has no name, so nothing can be found on Google about it either. In fact, it is simply a small rock, hindering the water of the Winnipeg River in flowing quickly towards the lake. The birds, however, find it irresistible, as the many claws of crayfish can testify. While humans favour the claws of the crab and lobster they eat, the birds will eat everything else and leave the claws. I wonder if they know something we don’t… 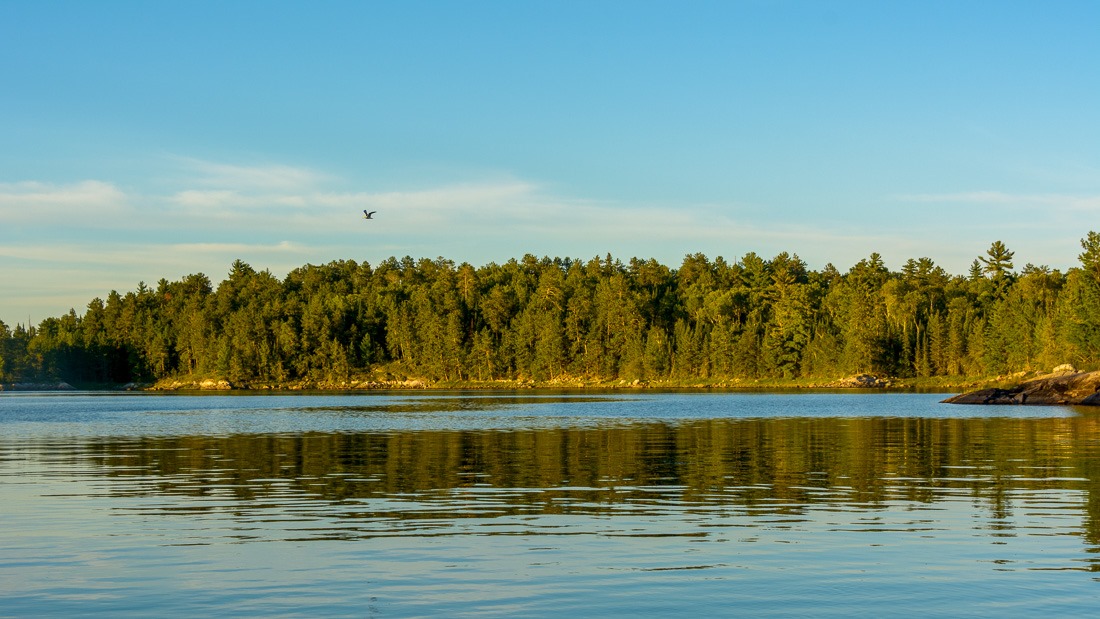 Then we went fishing. More about that another time. By the end of the day, another fishing trip to ensure a copious dinner was required. Since I hunt only with a camera, all the fishing effort was done by my friend. Within a few minutes, we had two Walleye (also known as Pickerel) for dinner. After fileting the fish, the birds had the right to the leftovers. They left nothing behind but the bones. 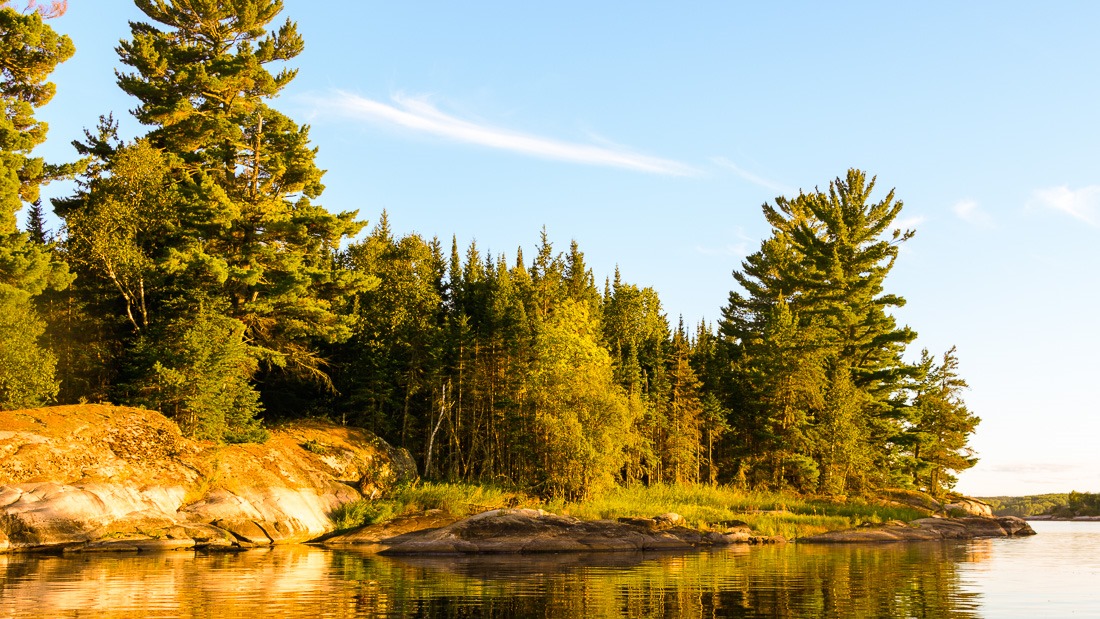 A golden yellow of the setting sun, taken over the water. What more can a photographer wish for? I noticed that taking the shots as they were, they tended to have the hue of old photographs as I remembered from National Geographic magazines from the 1950s. My uncle had brought a stack of them back from the US, and they had ended up on our coffee table. Back then, I devoured them all, both for the pictures as for the articles. Even if I didn’t read English too well in those days. 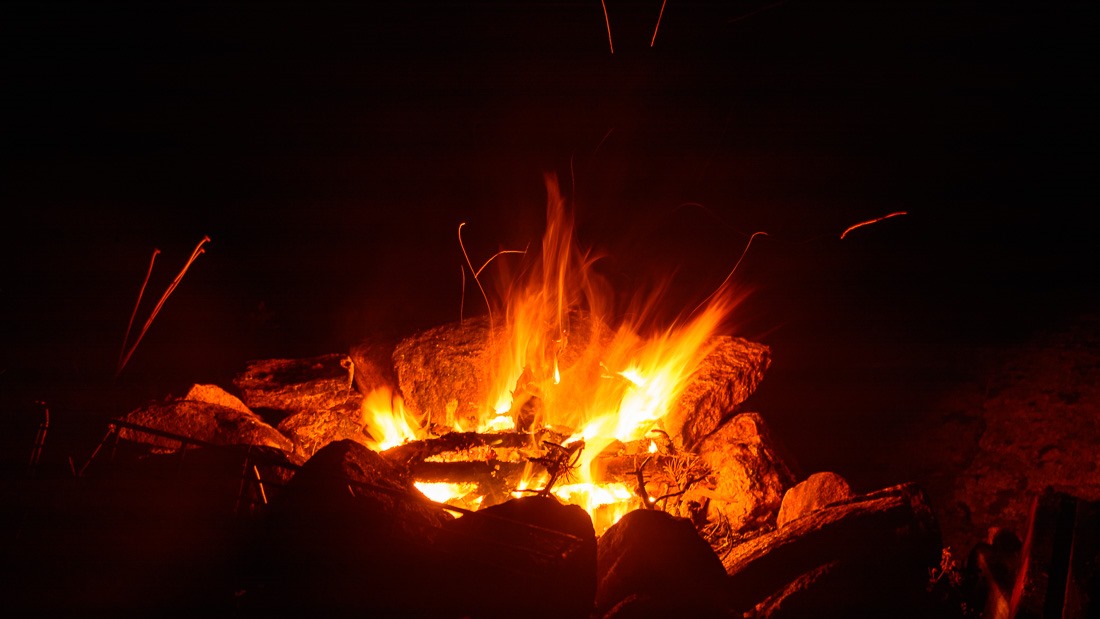 When it was again too dark to do anything but digest the dinner, a campfire (safe, on rocks) was the best thing to end the day. Of course, the mandatory picture of the fire was taken. It is surprisingly hard to get a good, fairly detailed picture of a fire. Luckily this was not my first shot at that. Another silent night in view.

Silence all over, more so than the previous night. The next morning held a few surprises for us. But more about that another time.

Silence is golden, they say. But sometimes that is just what you need to unwind from the noise of the city, that must be the valuable part.