The end of the summer is near. Nights are cooler and days are still nice and warm. Now is the time to go camping, nights that don’t make you float away in sweat and no more mosquitoes to speak of. Perhaps a few hungry stragglers, but hey, we’re on the prairies, right? Since my first photos taken with a camera, I have liked shots in the mist. 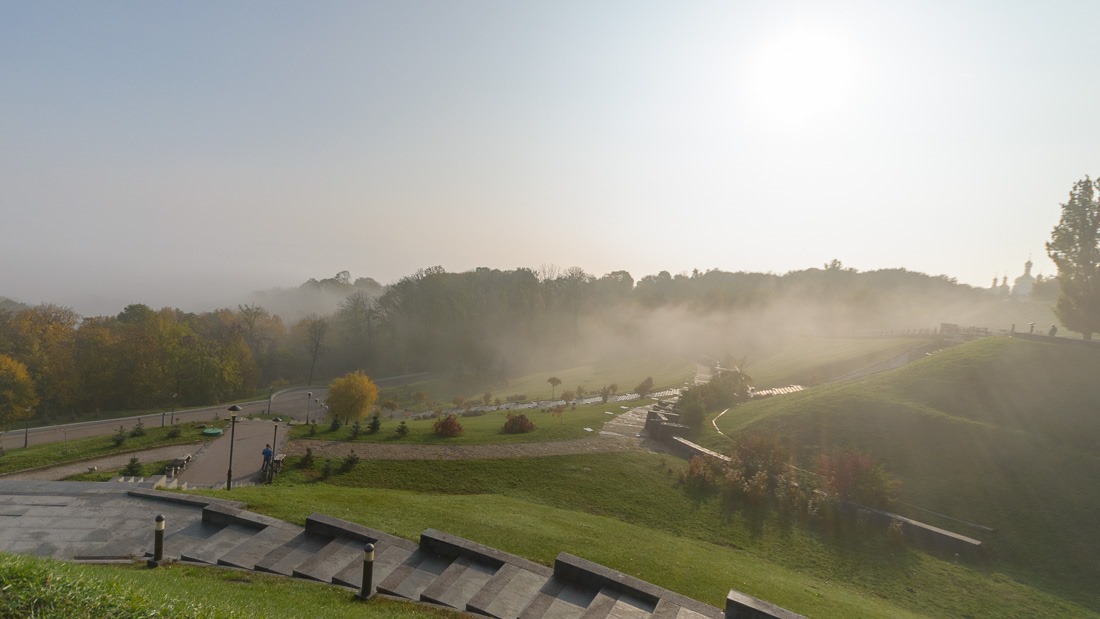 Ok, the first camera used 120 film (6x9cm negatives), and that was expensive, misty shots were not allowed. After that, the hunt was on. Yet in Holland mist is fairly rare, there is usually too much wind to form it. Only in the deep of the night it fogs up any roads or bridges. Hardly the time for me to go out and get some pictures.

Later, however, there were less constraints as to when to go out and shoot. I found that early morning was the best time to get a chance at foggy shots. Somehow, the labs that were developing and printing my pictures were always capable of some “Dehaze” function. Applied liberally, my fog shots never really panned out. 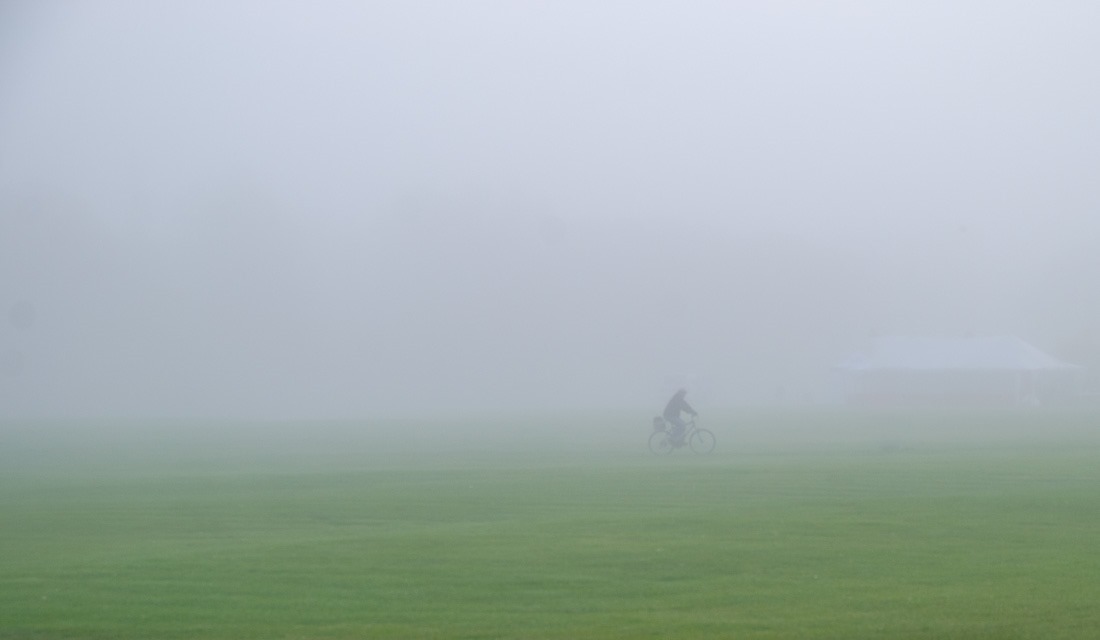 Rider in the mist

Now that I am shooting digital, they no longer mess up my shots and I get to chose what I like and what I don’t like. The lead shot of this post was taken in Kyiv, Ukraine. It looks out over the park housing the National Museum of the Holodomor, memories of this period seem to be very hazy for some, while still a reality for others. The misty shot was kind of fitting the situation for me.

The above shot of a cyclist could have been taken anywhere. The cyclist was the only one to see or know where he was going. Making him/her leave the frame of the shot makes the mystery of the fog even greater. 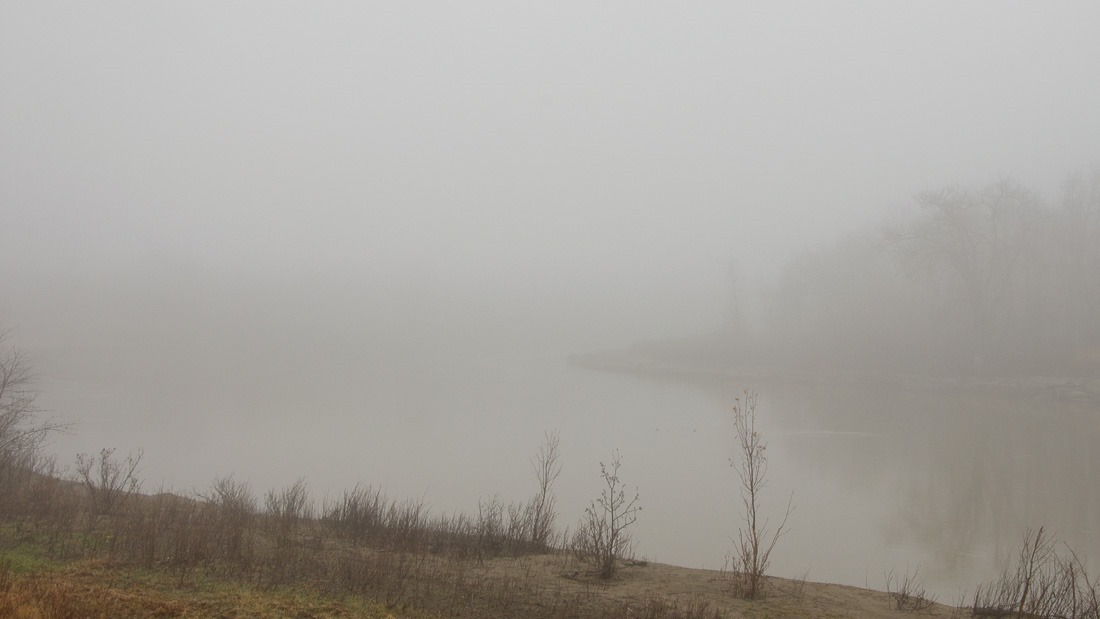 Yet not all pictures have an idea behind them. Most shots we take of a weather phenomenon conveys more of the feeling of the moment than the view itself. Going to the Assiniboine Park in Winnipeg one morning, I came across this view of a turn in the Assiniboine river. There was nobody around, no traffic or noise. The feeling was kind of “out of this world”. The picture I took was supposed to convey this feeling, but even now, many years after that, it simply remains a foggy picture. Only the memory I have of that moment makes it special. 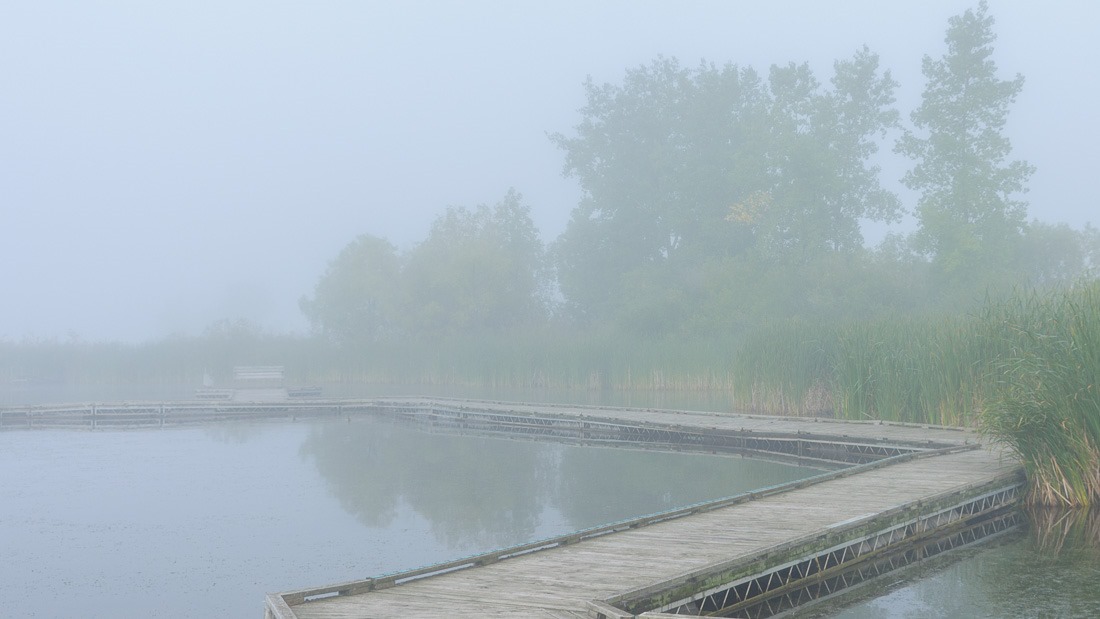 Other mornings, like one in Fort Whyte Alive evoke a quiet nature. A nice morning, with no wind to speak of. Hardly any visitors around. I lived close by at the time; I visited the place nearly every day for a few years. While the photo looks quiet, I know that there was plenty of murder and feasting going on in this picture alone. Yet the fog dampens everything and presents a serene view

Other mornings, fog was not expected. When I went to Grand Beach that morning, there was not hint of fog on the road. The weather was cool. Cool enough to make Lake Winnipeg produce steam. The difference in air temperature and water temperature was very harsh. One moment I was nice and warm, the next shivering. Should this happen in the night, one can imagine that stories about “Witte Wieven” or “Ghost witches” are quick to arise. 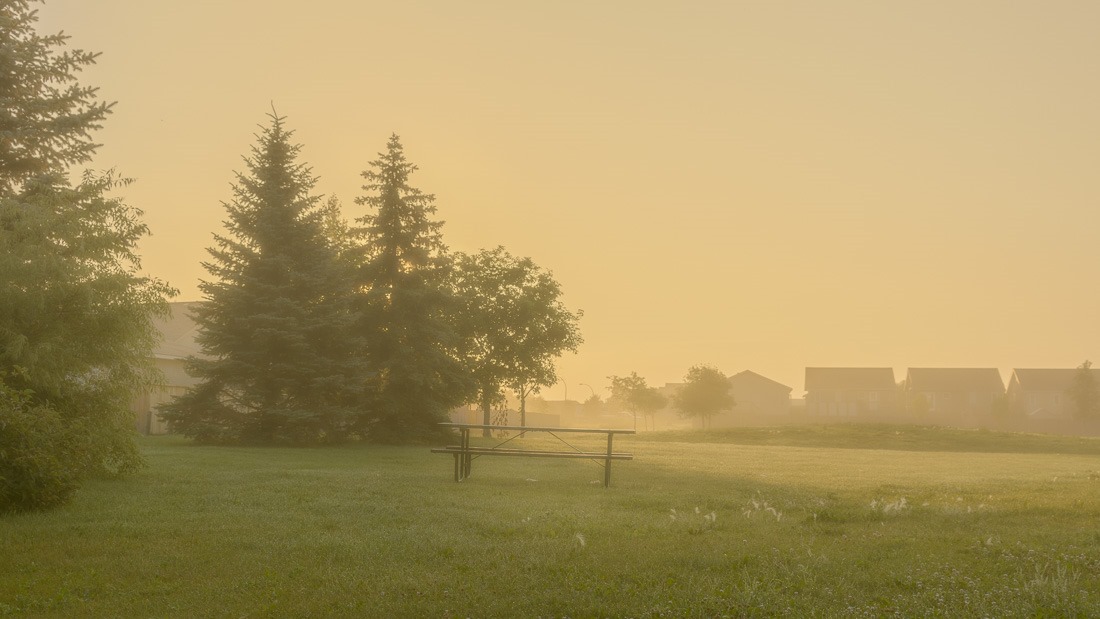 Closer to my home in Winnipeg, fog can dampen the view of well-known places, leaving them with some kind of ethereal mystery. Walking along the paths dispells the mystery very quickly, but it’s nice to be mystified close to home from time to time. 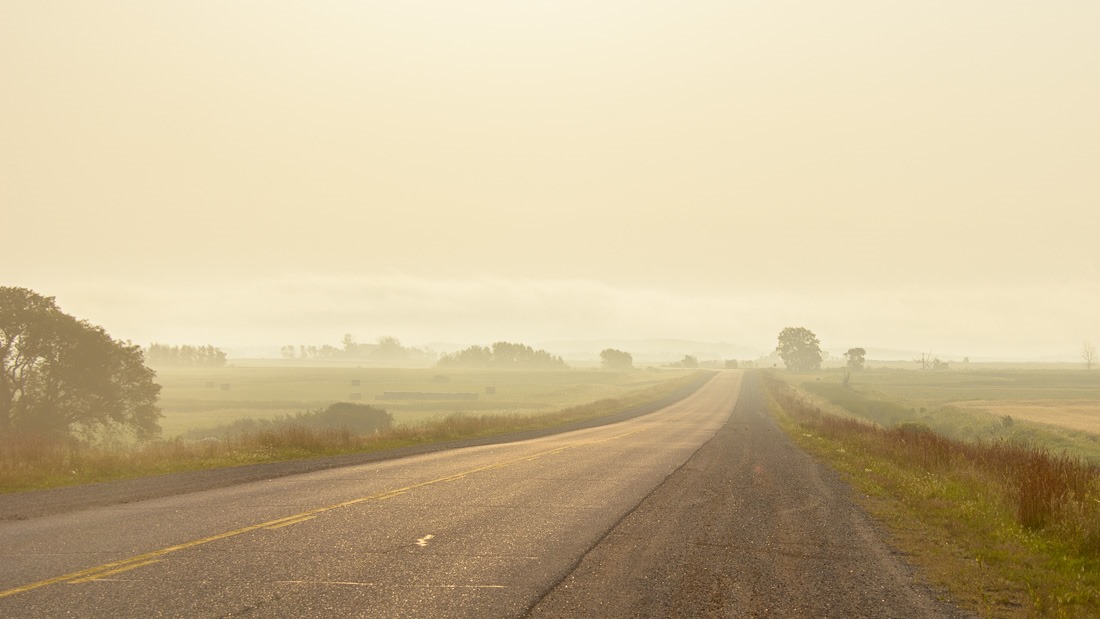 Later, on a trip to southwest Manitoba, the days started off with huge mist banks over the road. Not exactly fine to drive through, but at 6am this was not a problem. I was heading west, so the rising sun was behind me. I kept a close eye on it in my rear-view mirror. When it was safe enough to put the car on the side of the road (truckers usually don’t expect anyone there), I could get the above shot looking east. 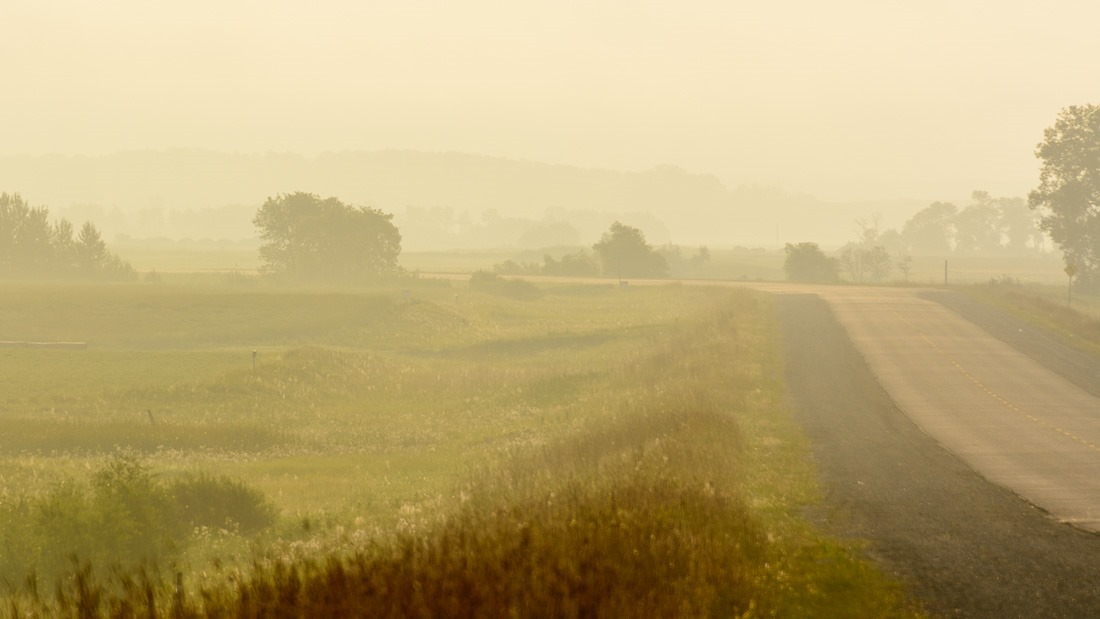 On the Redcoat Trail

The reddish looking sky is simply from the diffraction of light during sunrise. The same happens during sunsets. All in all nice shots, yet no ideas behind them to speak of.

Throughout this post I have spoken about mist and fog, but what is the difference between those two? Well, according to the UK Meteorological Institute, “Fog and mist differ by how far you can see through them. Fog is when you can see less than 1,000 meters away, and if you can see further than 1,000 metres, we call it mist.”

I guess that in the UK, they know a lot more about fog and mist than I do.