The Spirit Sands in Manitoba have been a place were the aboriginals would go only if really necessary. And then only for a short time. On a normal summer day the temperature can rise here to around +40C, making the sand a nice roasting +55C. 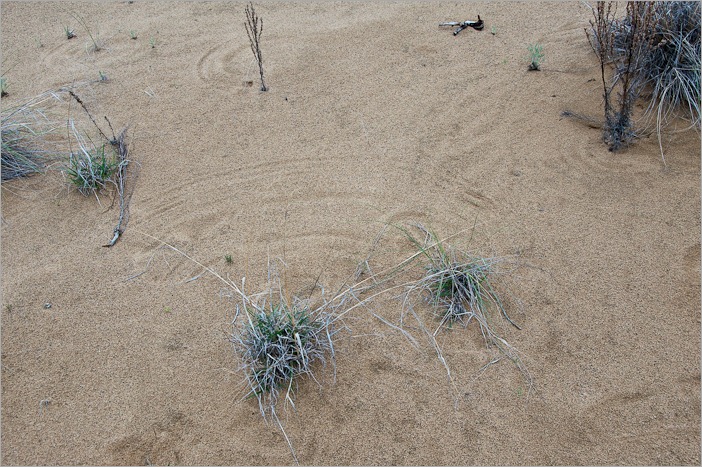 Sand in all its beauty

This is what you expect from a desert. And this is what you get in the Sprucewoods Provincial Park’s Spirit Sands. This is not a picture on the beach, I can assure you. Not that we don’t have any beaches, but this was definitely not one.

So, after having contemplated the last trees of the trip, we headed on to the more arid places. 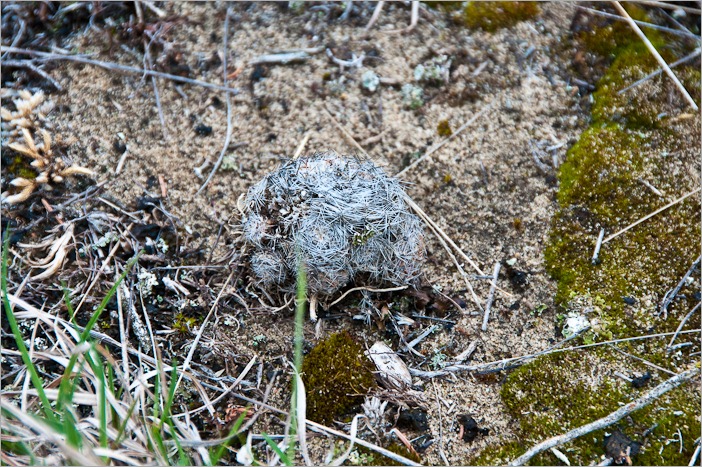 We were greeted by a Pincushion Cactus, native of the region. I must get back here in a few weeks, it will bloom with a brilliant purple flower.

Then, the first obstacle to take. 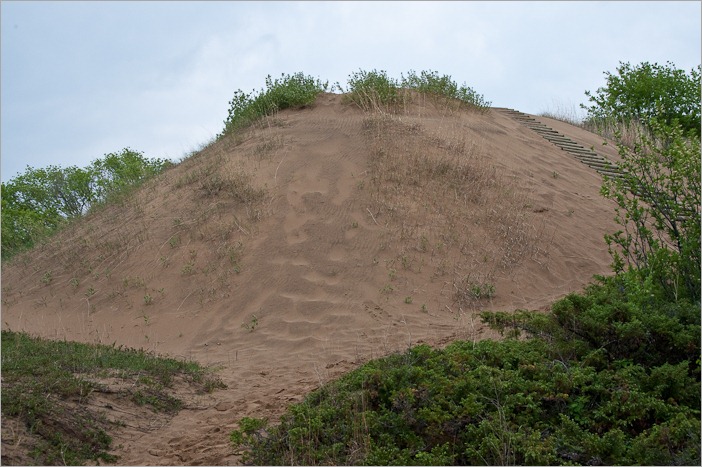 Ok, this looks horrible to get over, but with the ladder on the right, it is fairly easy. The weather was overcast, so no sun baking my head. Could have been worse. 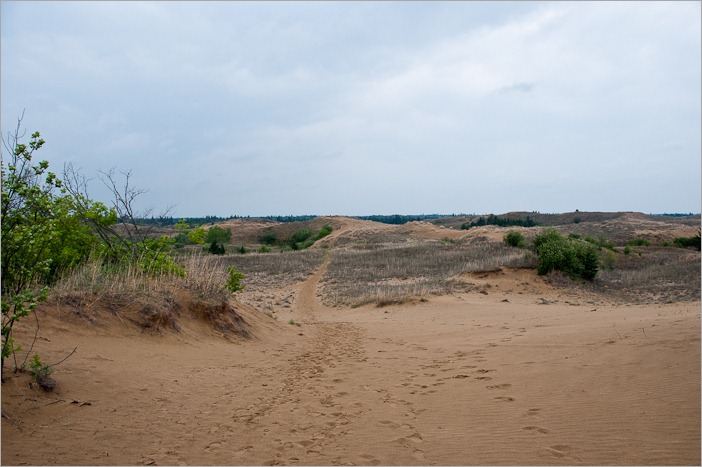 A beachy sight, but without water

On top of this little dune, the sight was magnificent. Sand everywhere, the vegetation only small stuff, hardly noticeable. Plodding through the sand we went further and further into this desert. No worries, we had a map and a GPS. Even more the paths were marked.

But if the marked path does not correspond to what you see on the map and the GPS only shows a nice green patch on its internal map, well, you do get a little worried. And thirsty. A GPS is only as good as the maps you feed it. 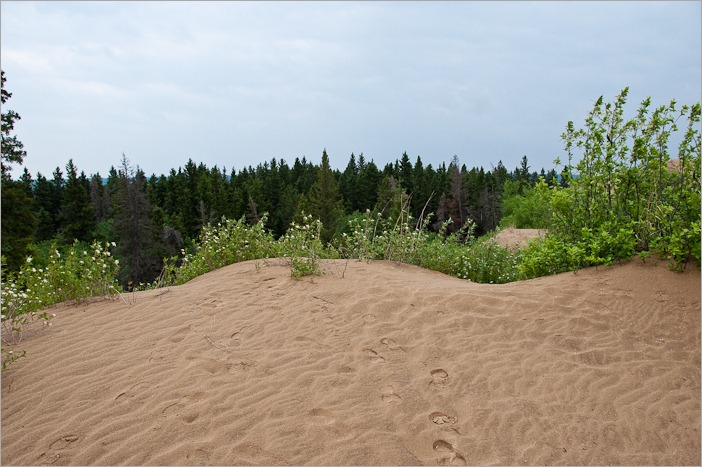 Near the edge of the “desert”

The Spirit Sands in Manitoba may look like a desert, and on a hot day would feel like it, geologically they do not qualify as a desert. They qualify as Dunes. Your shoes will be full of sand either way. 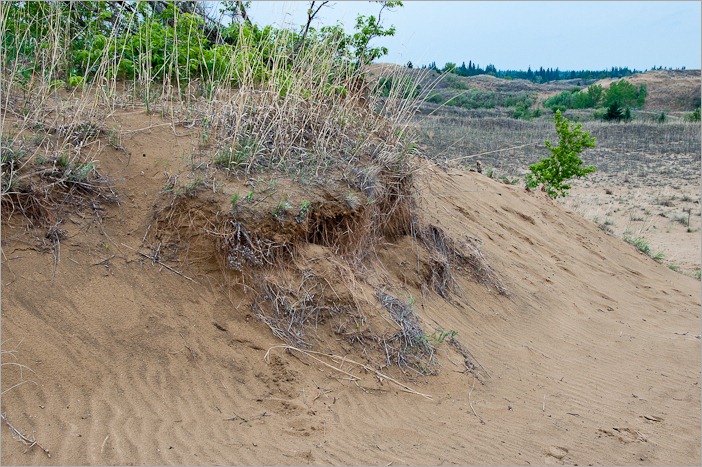 Even the grass has trouble surviving here

The vegetation here is all about survival in a harsh, dry climate. The aboriginals knew that and took the knowledge of this environment as a lesson. The cactus will take in the water whenever there is a bit, and will protect it with its pins against anyone who wants to take it. 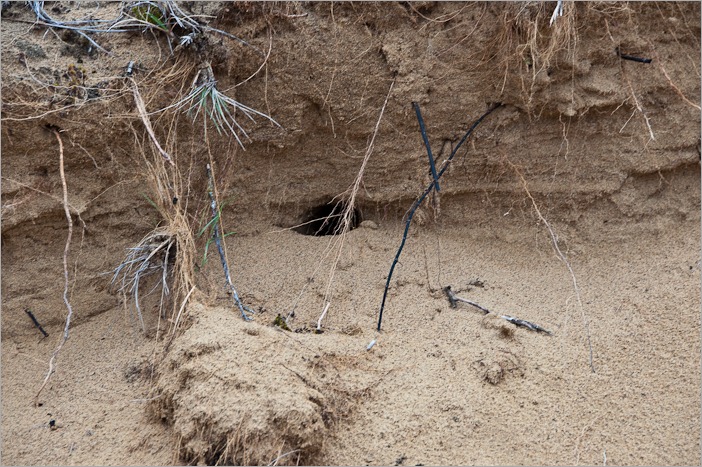 Insects and small rodents will bury themselves deep in the hot sand to escape the heat and come out at night. All these things can be learned from this environment. Of course you will have to have your eyes and ears wide open to it. If you come here without water on a hot sunny day, your main interest will be to find an oasis or get out. 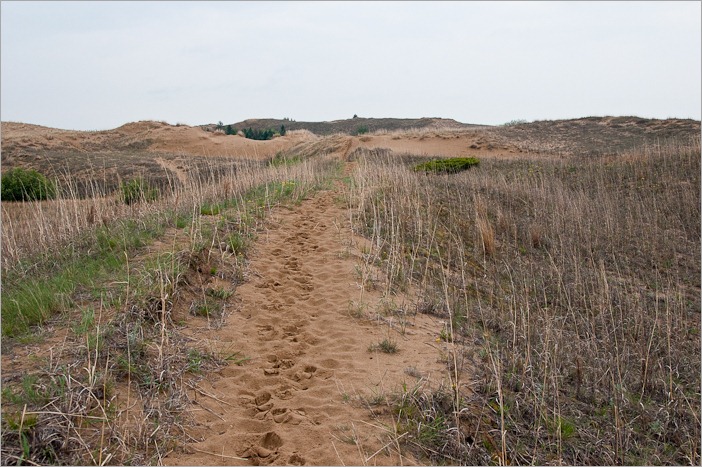 And if you have no map, or you cannot read the one you have, well, you may have some problems. The path you will take is always longer than it looks. On this warm but cloudy day we were lucky I guess. We didn’t get baked in the sun.

Some animals make this environment their home and don’t show themselves to humans. But their traces still show up. 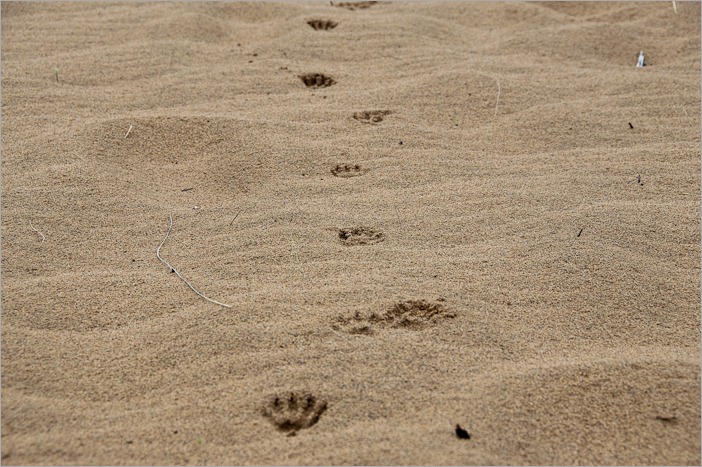 Not dog traces, more a raccoon

I am not sure what animal leaves these traces, but they are not dog paws, probably a raccoon. A little further on they disappeared in the dry grass. There were no human footsteps beside these traces either. At least not until we came along. 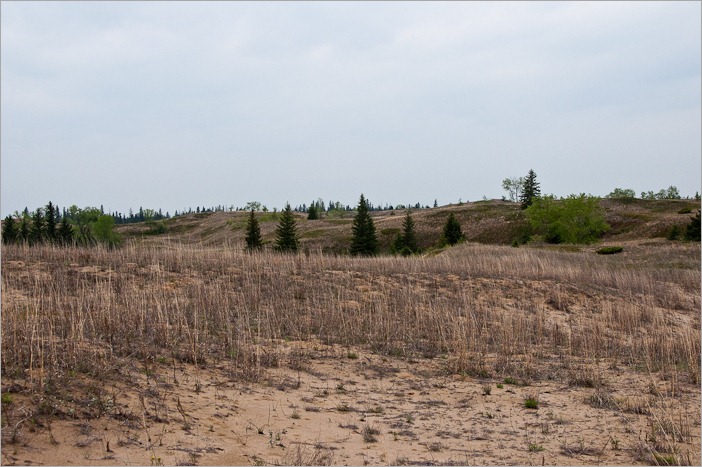 Some places seem to have water, but nothing is usable for drinking. The trees and the aboriginals knew about the water. Both used it to their ends. In the few shelters that are built in this terrain, there is no water at all. But in the oasis the water is at a mere 1m deep and is of great comfort to all. However, with an overcast day like this day, pictures were less than easy to take there. 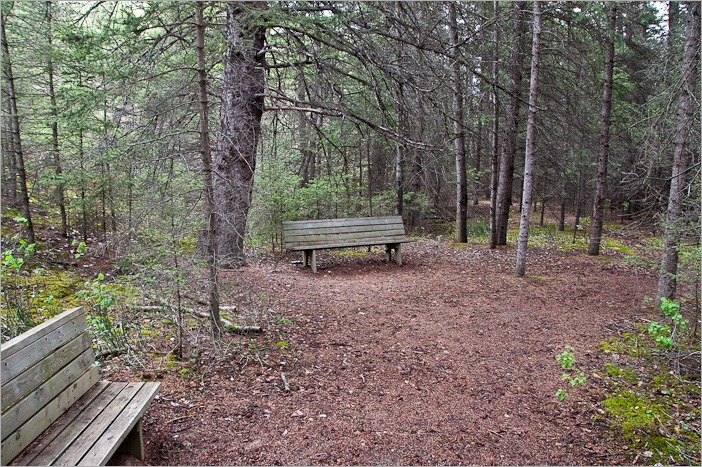 Ok, benches can be found all over the place, the trees and the shadow are more than welcome on a sunny day.

That left us with only one small problem: no map showed an oasis and we had no way to know where north or south was. Mosses don’t grow here, they only grow in more humid places. No orientation by the north, mossy sides of the tree trunks. 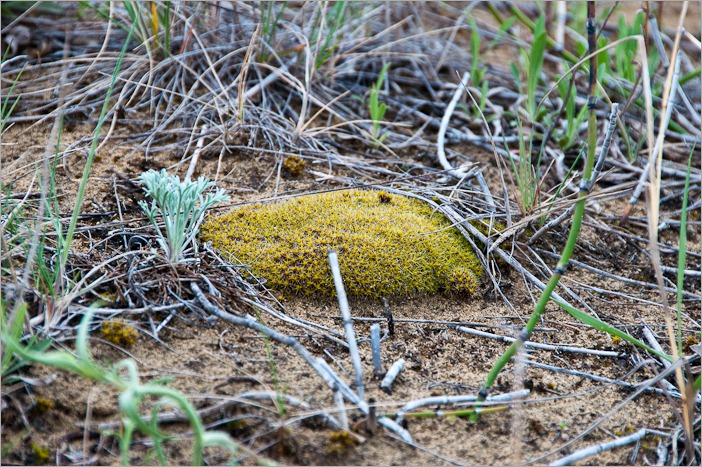 I don’t believe this is moss

So we were left to wander around and try to find a place with a “You are here” indication. A little later we found one. It told us that we were some 5km away from the parking where we left the car. Well, at least if you could follow the trails on the map. There were a few other people in this shelter looking for the same thing. We decided to follow them.

But never follow people you do not know. They took the trail in the right direction. Nice. But after a while they “decided” to go to the parking on a trail that said “P” with a marking of 4.6km underneath. Our map (finally we found out where were were on that thing) showed us there was also a 1.7km trail to that same parking. The other people still had another 2 hours to walk.

We decided to take the shortcut. 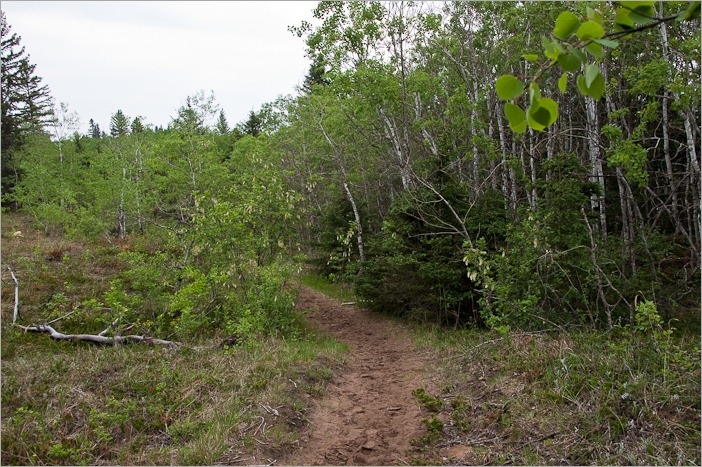 Shortly after that we arrived in the green environment again and I felt a lot better.

Back at the parking lot, I took a closer look at the panel with the map of the whole park. Trying to find out where we had walked. It felt like we had walked at least 10-12 kilometres. 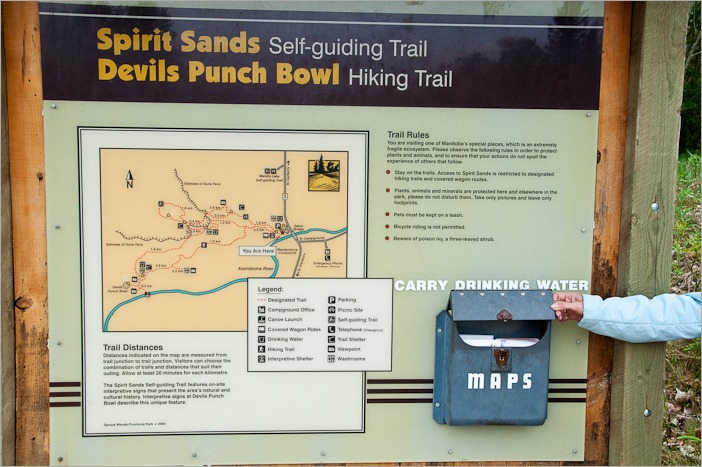 Yes, there it was, the trail we had used. Not exactly what I had had in mind. And we only made a 6km walk in more than 2 hours! Looking at this panel, I now understand: allow at least 20 minutes for each kilometre it says. Yeah, right. “CARRY DRINKING WATER” is another one of the advices on the panel. Perhaps next time we will look at them better before moving into it head first.

All in all we got out lucky without water, back in the car we drank every single drop we had taken with us. If you ever go to the Spirit Sands, keep in mind that the aboriginals stood on the edge for a long time before going in. Was it out of awe for the environment or hesitation to get themselves roasted alive? We’ll probably never know.