Of Damsels and Dragons

One could think that Covid-19 keeps us inside. I beg to differ. It makes me travel back in time to visit things all over again. A few months ago I was thinking about what kind of insects I had photographed. A handful, I thought, so I asked my Lightroom what it had in store for me. 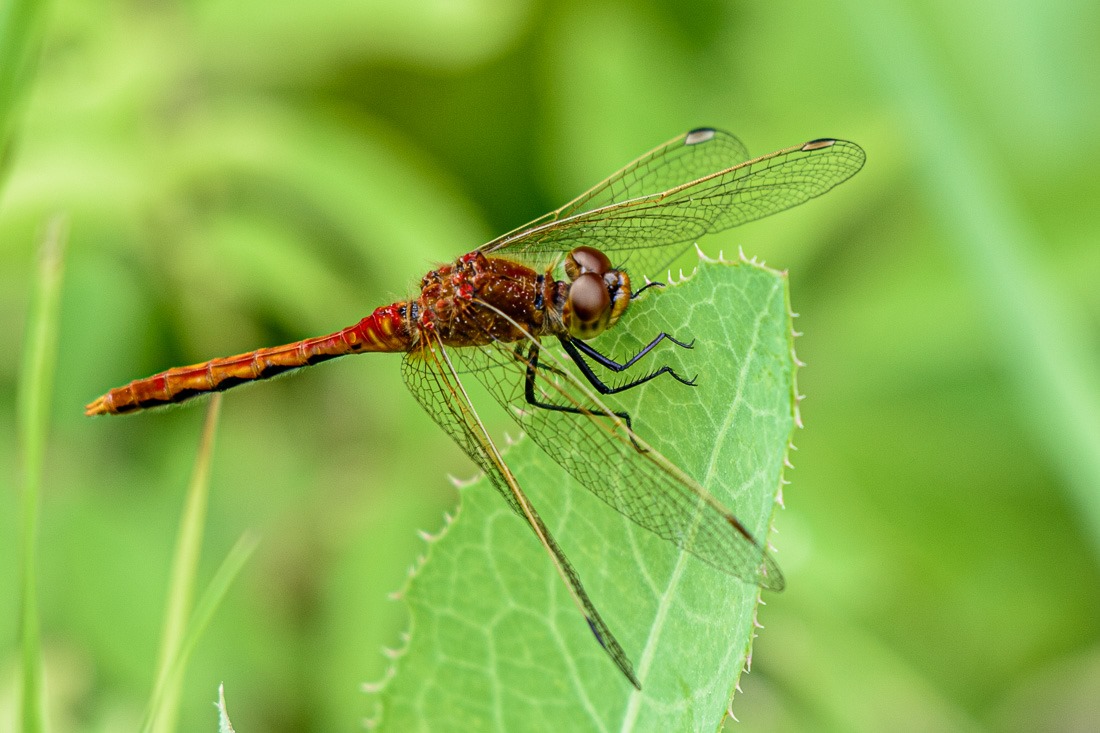 To my surprise, a lot more insects than I thought. Of course, if you shoot everything that dares to show itself, you will end up with stuff you don’t remember after a while. I did have the good forethought of keywording my images when I imported them.

Most of these dragonflies had names, some had not. A friend of mine who knows where to find the answers provided the missing elements for me. Way faster than looking for hours for myself and getting it wrong in the end anyway 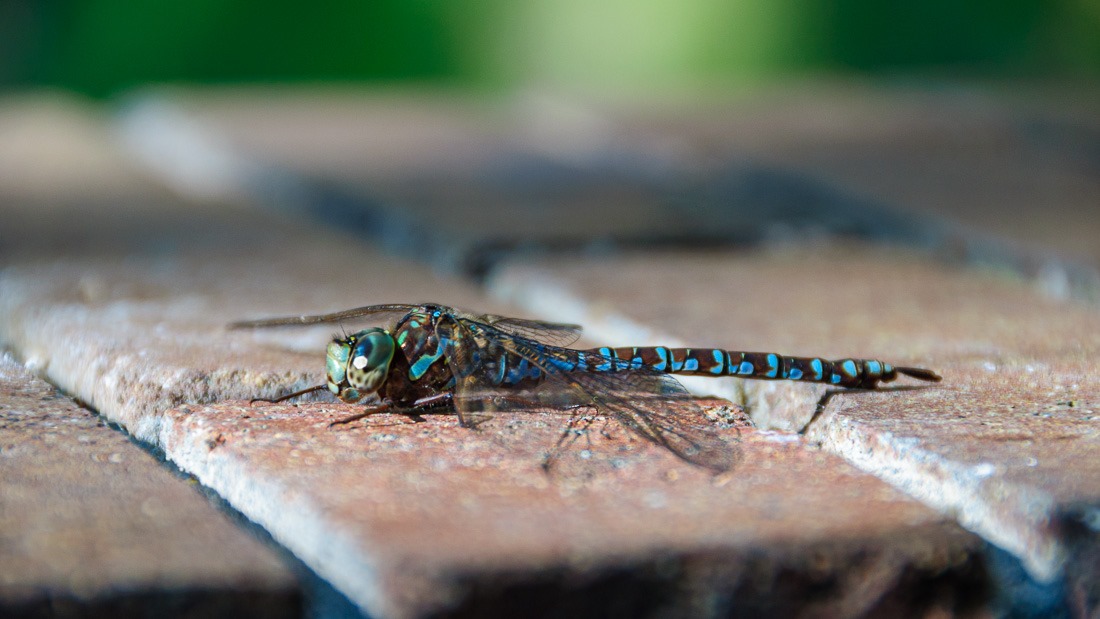 My search for dragons and damsels yielded way more members than I had anticipated. Even some of them that are fairly difficult to find in Manitoba. All of the insects are local here, albeit in different habitats throughout the province. The above Green Darner was sitting on a piece of brick, oblivious to my presence. This was one of my first DSLR shots of a dragonfly. It’s not that easy to get everything in focus and this being my first, some parts are simply not in focus. 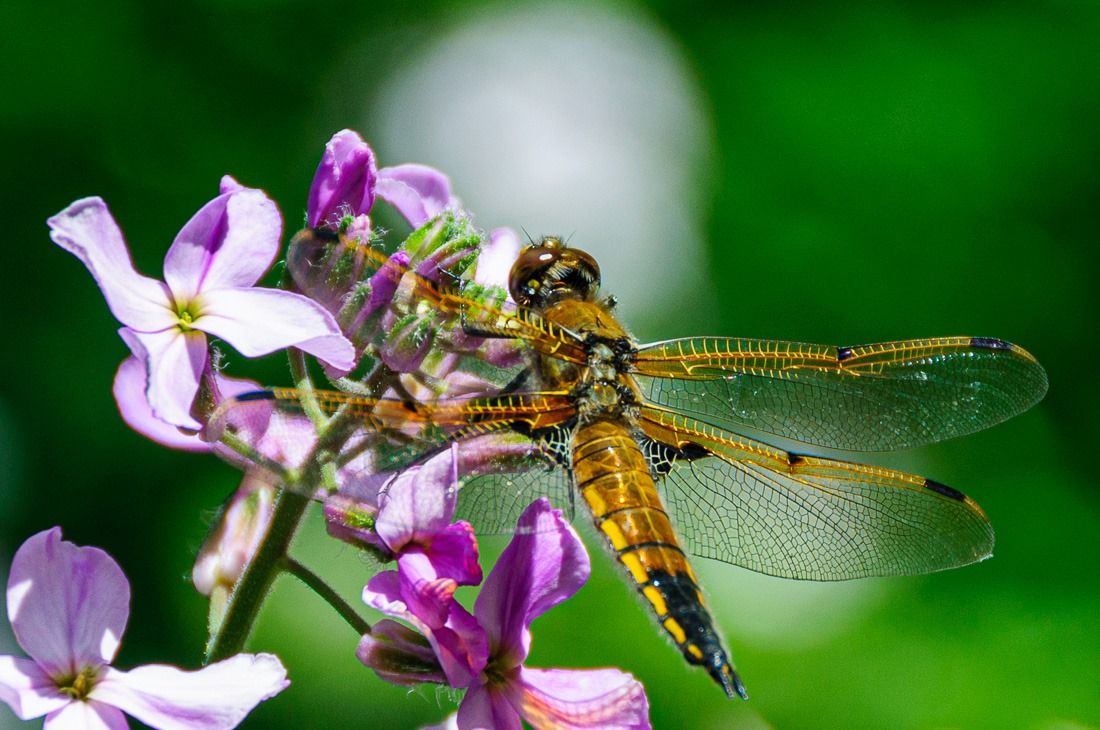 Some time later, I went out again to find other subjects and came across this Four Spotted Skimmer. This one was skimming in a park in Winnipeg, not far away from the Assiniboine River. At the time it was a park I frequented a lot, as it was close to my home. 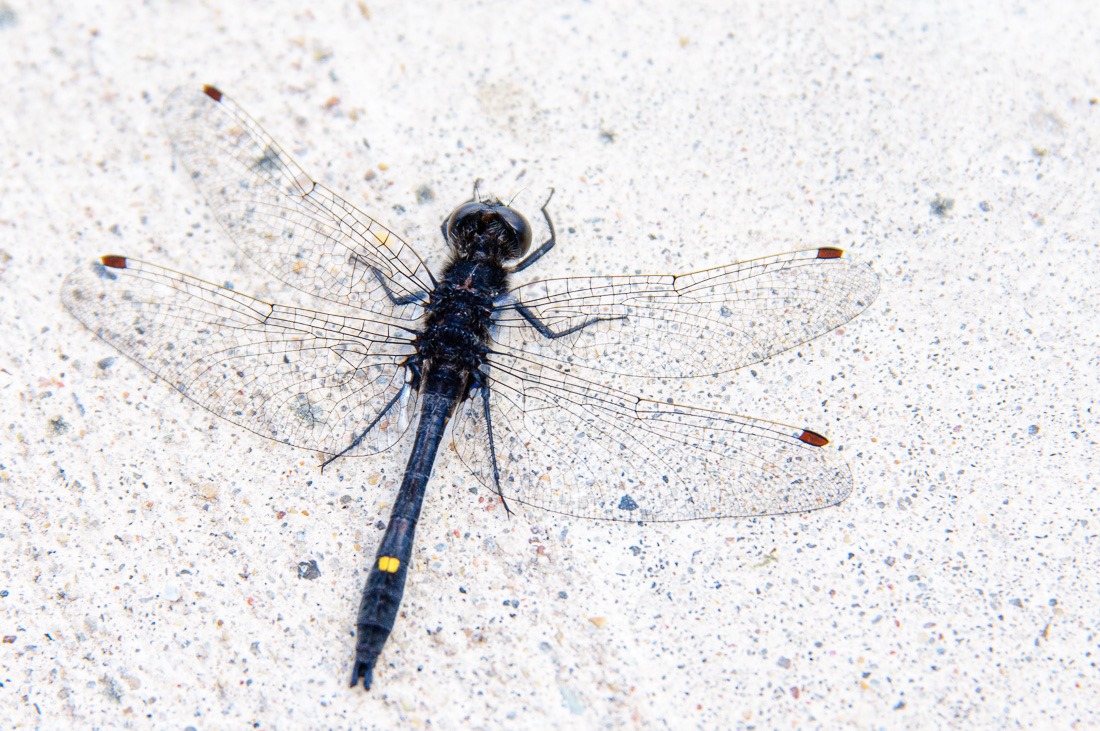 Once I started to see some variation in the dragonflies I caught, I was kind of… hooked. I wanted to get more and more, wherever I could find them. My means were rather limited, and I had no macro lens for my camera. Once I got a new zoom lens, my now walk-about lens of 28-300mm, I had some more possibilities. The above Dot-Tailed Whiteface was shot near the Duck Pond in the Assiniboine Park. The fact that the background is inseparable from the subject only dawned on me when I got home to look at the pictures… 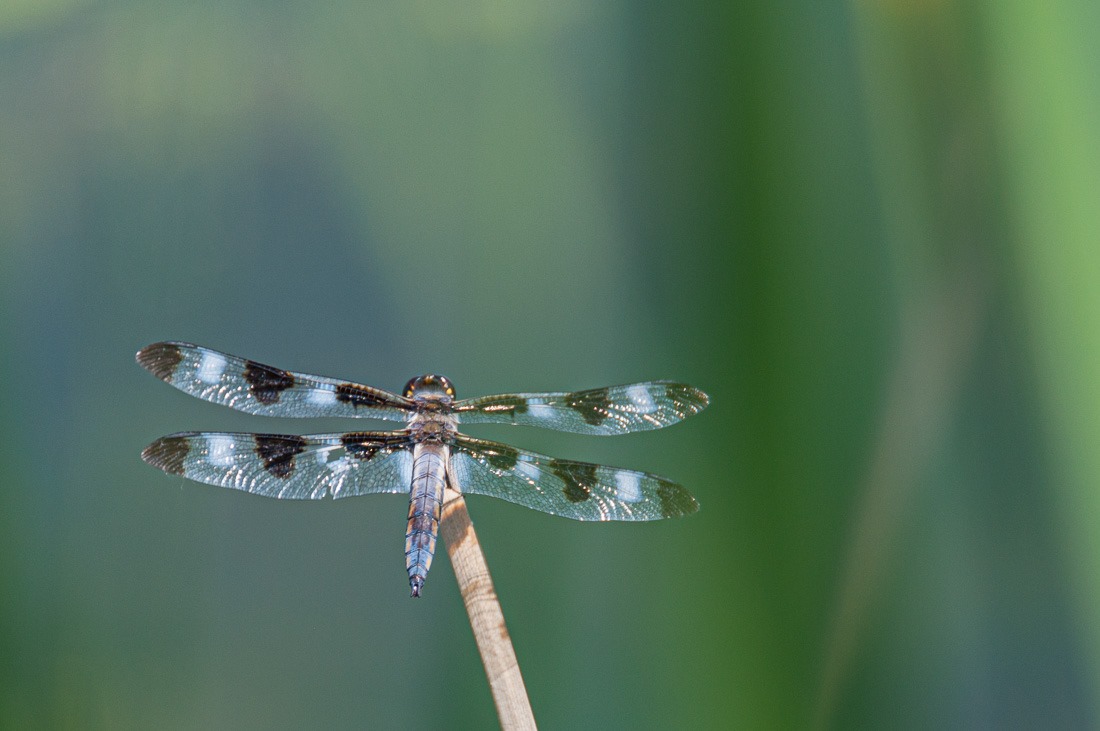 But at least the shots were sharp. Way sharper than I had had before. Or so I thought. As it turned out, the shots were difficult enough to get. Even more so with dragons that didn’t want to be caught alive with a human close to them. Barely I moved and off they went to quieter places, without a paparazzo to stalk them. So I had to find places where there were more of them. Fort Whyte Alive was such a place. The Twelve Spotted Skimmers were plentiful there and were easy enough to get in the frame. 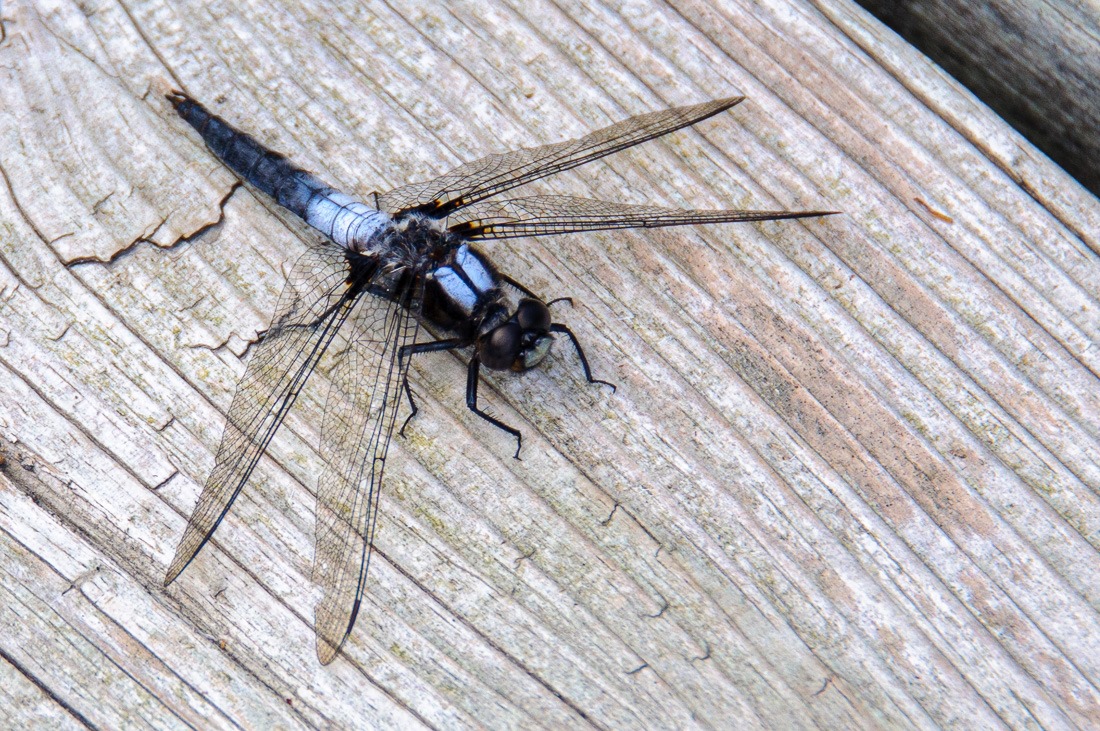 Provided I didn’t get too close. This Chalk Fronted Corporal was kind enough not to move for my shot. Or tired enough not to care, I don’t know. All I wanted was get the shot of those dragons, the more the better. 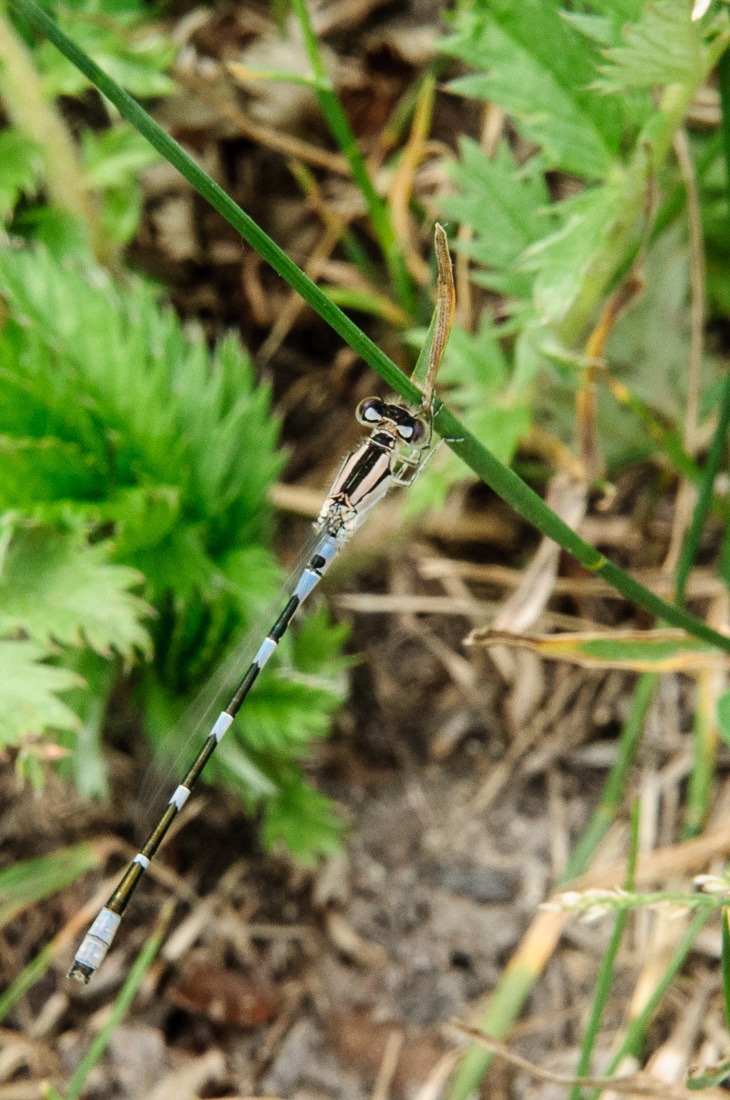 When I look in my Lightroom Catalog, I see that I didn’t machine gun them in any way. A few shots here, a few shots there and that was it for the photo session with that particular dragonfly. Damselflies turned out to be a very different story. This Bleuet was quiet, until I got within reach, it seemed. Also, this seems to be a female, a bit paler than the males. 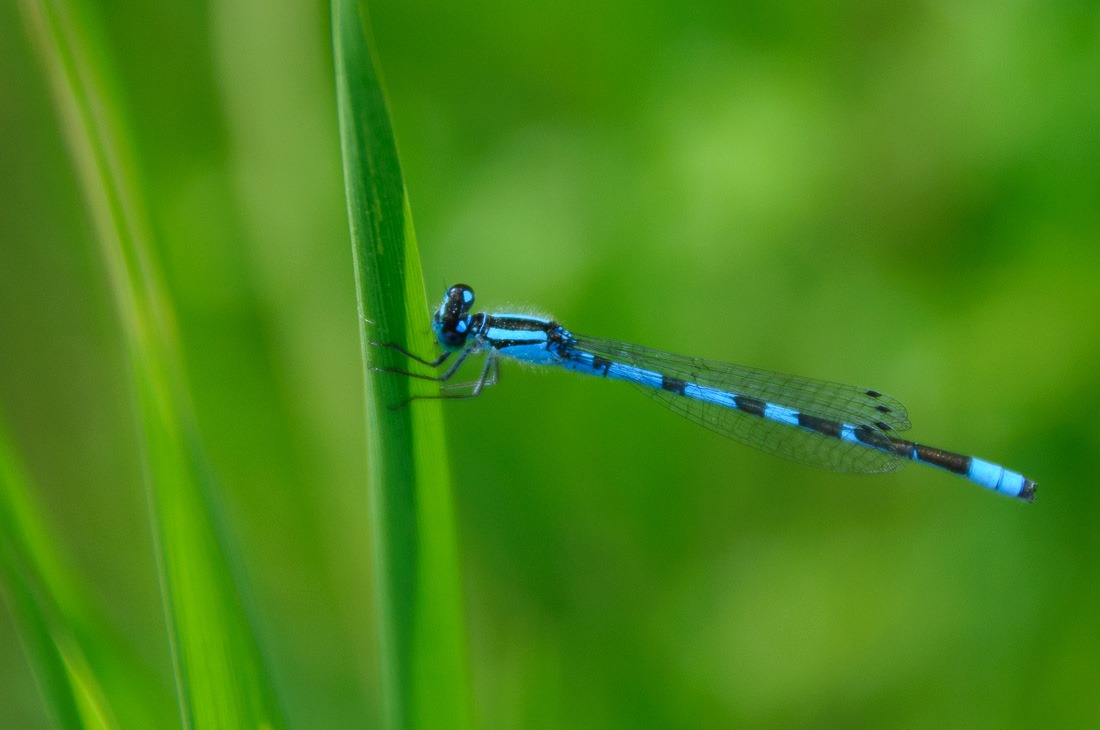 The intense colour blue of the males made it very hard to get a decent picture of them. The focusing system of my camera seemed to disagree completely with the blue colour. Either that, or they were trembling imperceptibly. This is one of the rare shots I have of a Bleuet, barely in focus. 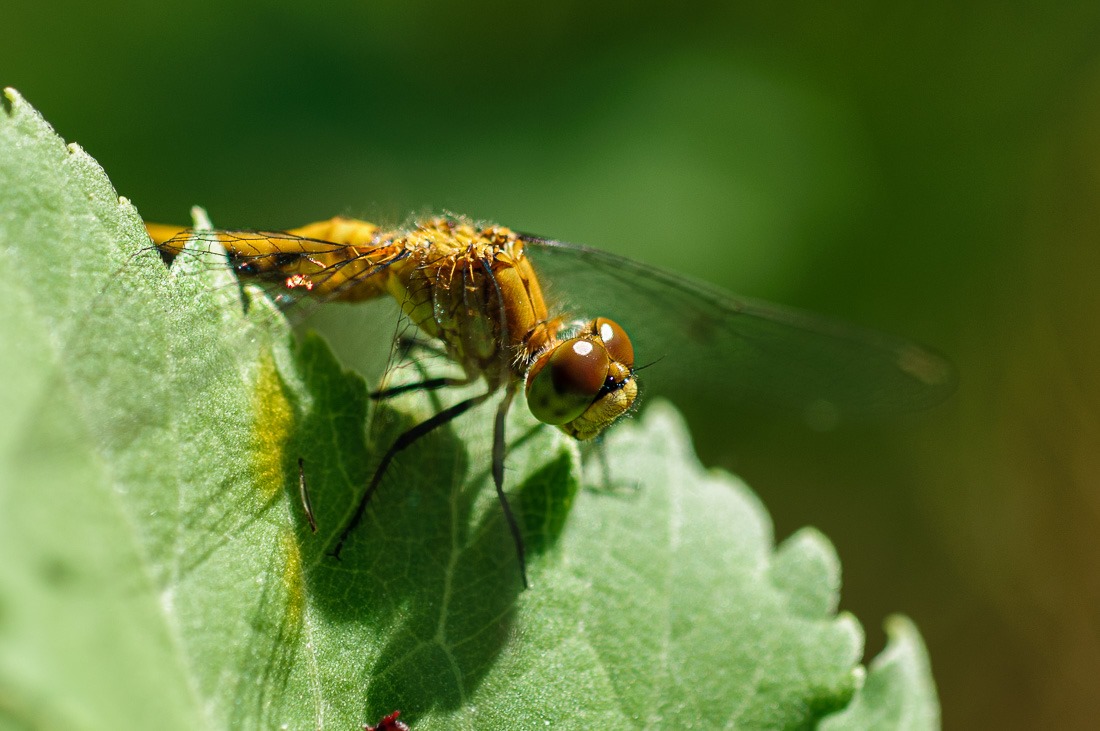 Or perhaps they were just too small for my lens to pick up on. Better to stick with the bigger guys, like this Saffron-winged Meadowhawk.  Or I should say gals, as this is a female. This one was taken in Birds Hill Park, slightly north of the City of Winnipeg. There are several ponds, lakes and swamps in this park. Ideal for mosquito-eating machines like these. 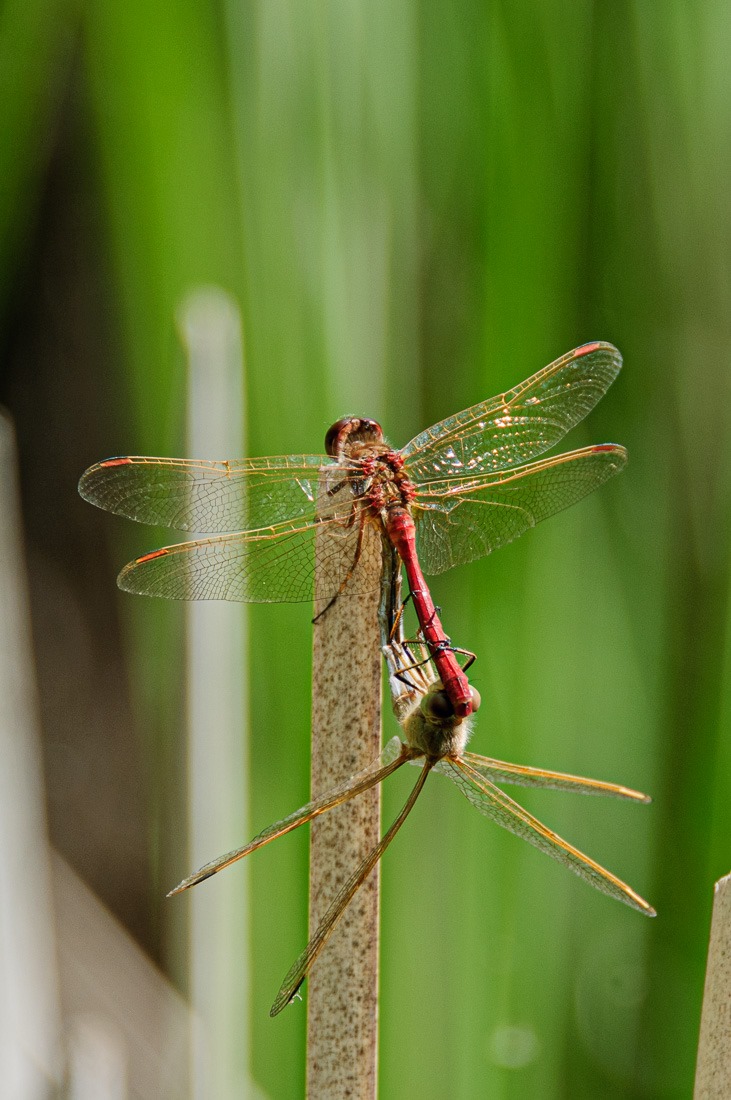 The easiest way to see which dragon is male and which is female is during the mating process. There is absolutely zero romance between the dragons. The male sees a female and hooks on to her behind the head. He then positions her so that her genitals touch his secondary genitals on the abdomen. His abdomen has small hooks and scoops. Scoops? Yes, to scoop out any previously deposited sperm from any previous male. That way he makes sure that the offspring will be his. The female has no say over the whole procedure. Once mating is complete, the male takes off with the female to make sure she deposits her eggs where they will hatch. Thus making sure no other male will scoop out his sperm and replace it with a different vintage. 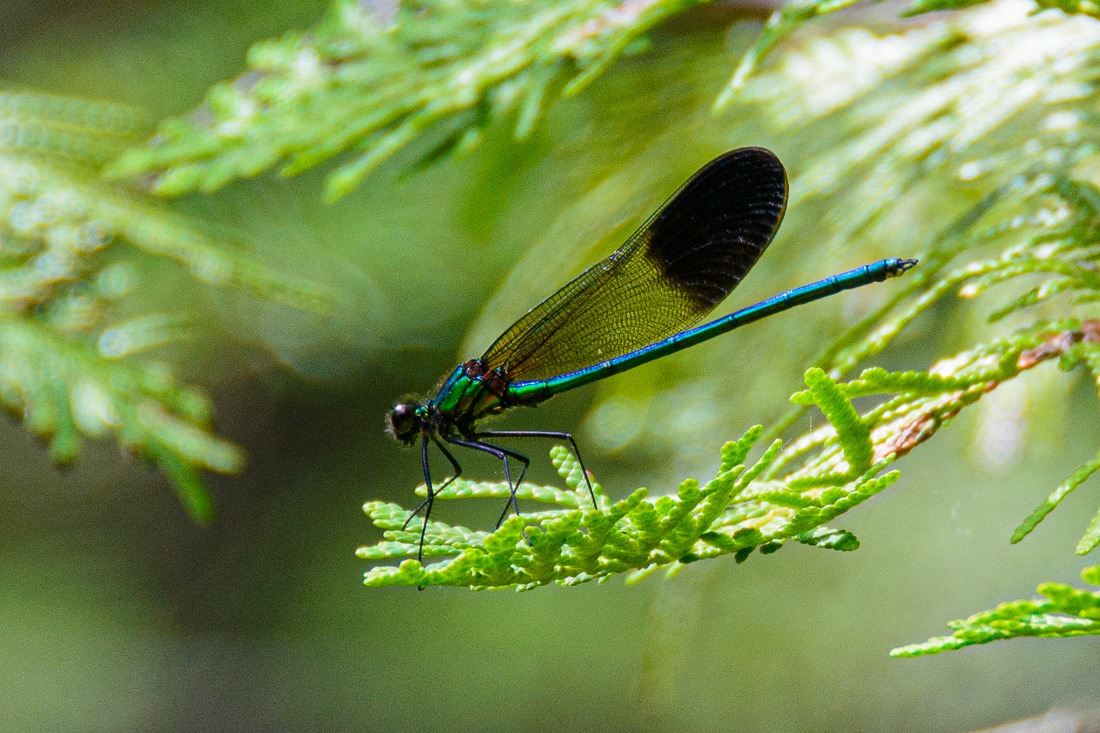 All in all a pretty heartless way of producing offspring. Damselflies are no more romantic than their bigger cousins, but they sometimes lay their eggs in trees or other places than just in a pond. Up until recently, I thought we only had Bleuets as damselflies here. Then I came across this River Jewelwing, in a completely different environment. That makes me think that I will have to go out and find other species as well this coming summer.

That is, if the Covid-19 outdoor rules are not sharpened to keep me in my home and yard for the rest of the summer. I think I will make it somewhere outside anyway.