Judging by the temperatures, winter is nearly over. Giving away to a few days of spring and then summer. At least that’s what we have come to expect in Manitoba. That it is only the beginning of March makes no difference. We all know that spring and summer will come.

At least at one point in time. Perhaps next year. So for now we can show our pictures of the almost  past season, with the hope of a new season to start.

Will that be soon? Nobody knows, not even a groundhog.

The issue is the same every year near the end of winter. We have had enough of the cold and the biting winds. Enough to last us a lifetime. And yet, there is more to come, March and April can both be cruel to the inhabitants of the prairies. 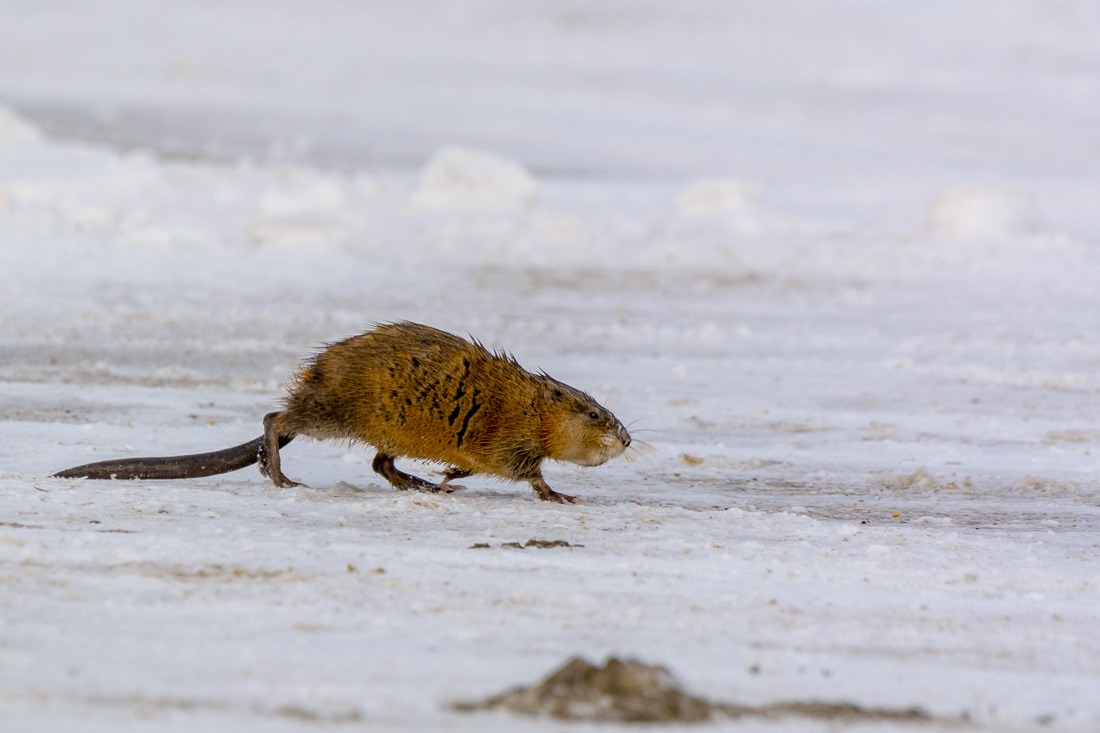 Muskrat outside of his home

Photographers have had enough of shooting mostly black and white, they are hunkering for some colour in their shots. Other than a clear blue sky, that is. They start shooting macros inside their kitchens to pass the time. Even the garages are too cold for any activity. 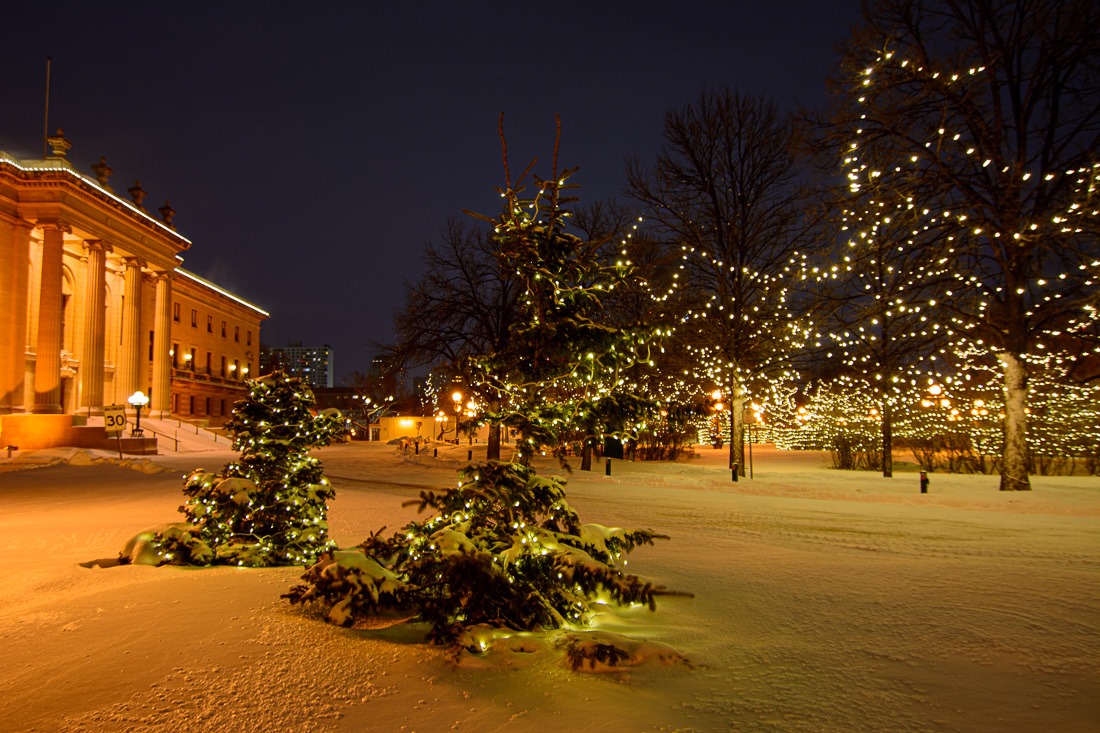 Lights on the Legislature

The mood from the start of winter has changed from “Winter Wonderland” to a grim feeling of hatred towards the thermometer, and in some cases even towards the weatherman on TV. Unless they show something positive (temperature-wise, that is), they are no longer welcome in our homes. 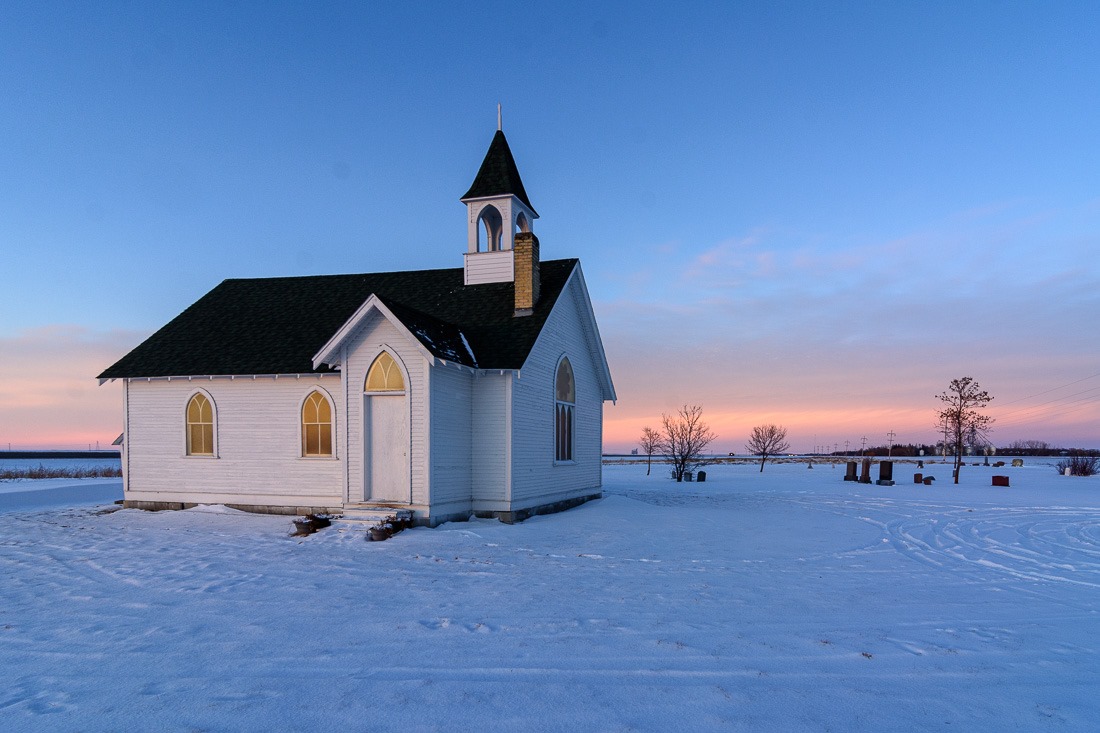 Yet, there are still some intrepid pixel hunters that find things to photograph and beauty to show. I’m one of those. Even if my patience with winter is starting to wear off, I still enjoy the plains and even the forests under this white blanket. Things are serene in this way. When driving alone, I put up some ethereal music and let myself dream through the area. With the car in “park”, that is… 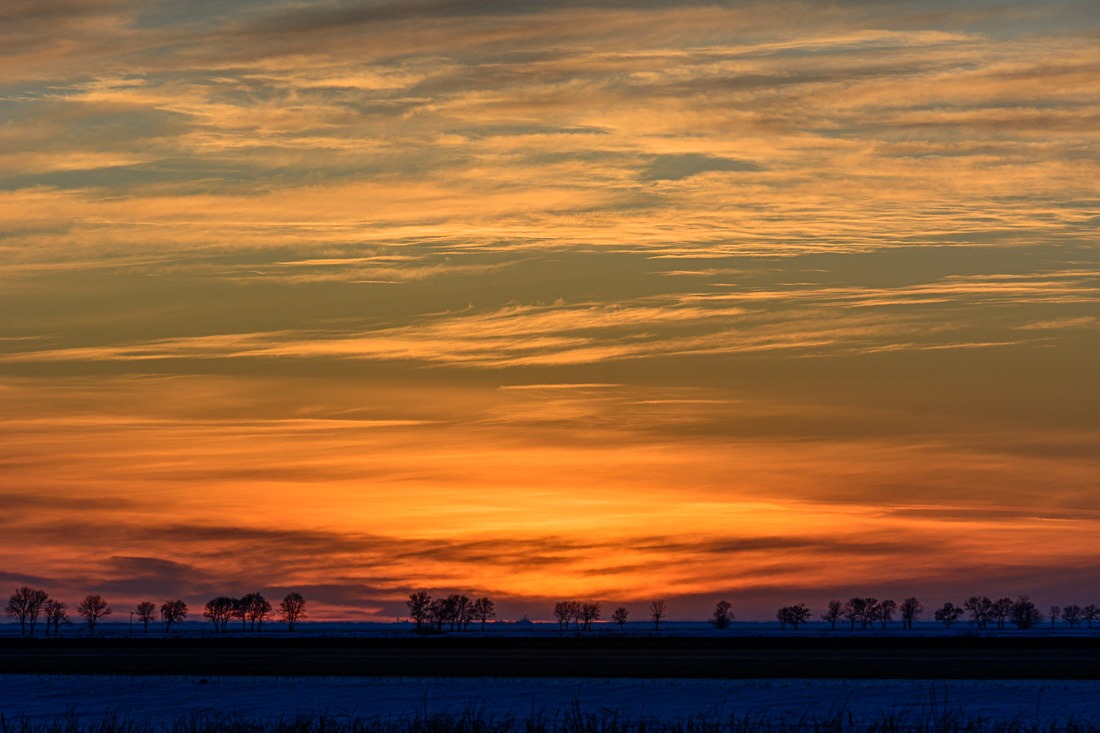 Sunsets on the prairies are known to be spectacular, even more so in winter. Perhaps because there is nothing to block the declining rays of the sun. While shooting this sunset above, I naturally grabbed my wide-angle lens (11-16mm Tokina), but soon came to the conclusion that shooting this at some 250mm with a different lens gave a way better sense of the reality of the moment. 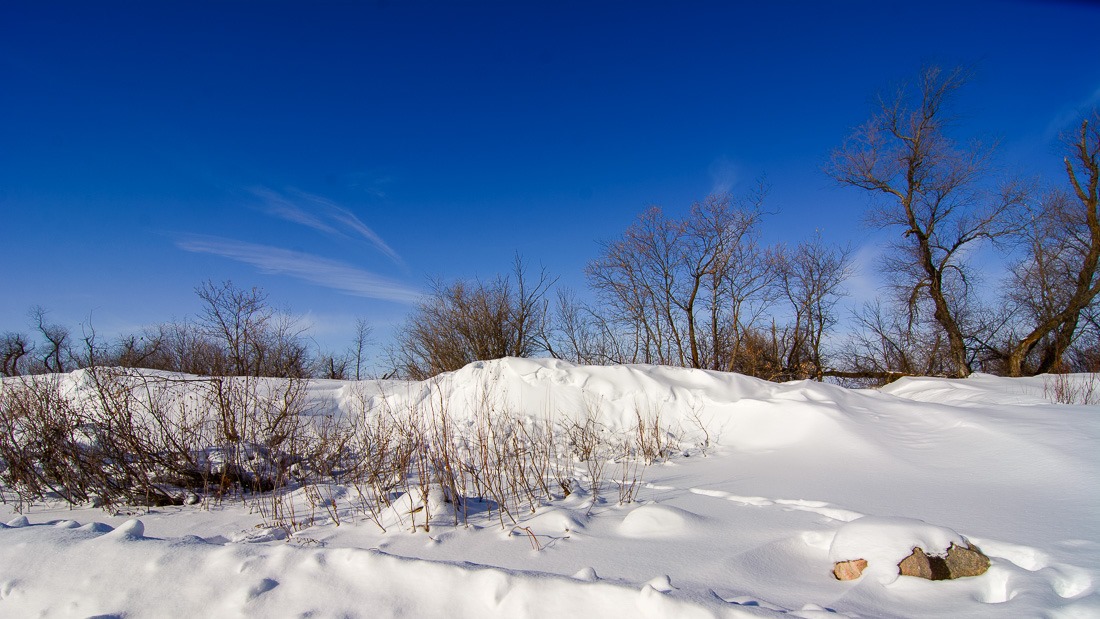 Most of the times that I am outside, though, is not during sunsets. Midday, plain harsh sunlight is very often on my menu. It makes for tricky shooting conditions. Finding the right spots for pictures can become a challenge. Luckily Manitoba has no shortage of beautiful spots to shoot. I’m sure all other provinces and US states have the same opinion of their area as well…

Lonely roads are my preferred places. In the above picture, a friend and I were on such a road. While the weather was nice in Winnipeg, here it was just beginning to snow. Within minutes the end of the road was completely out of sight. The tiny specks in the sky are not sensor dust, just snowflakes coming down. It was nearly silent in this place, apart from a few birds fighting over some seeds in the bushes somewhere. 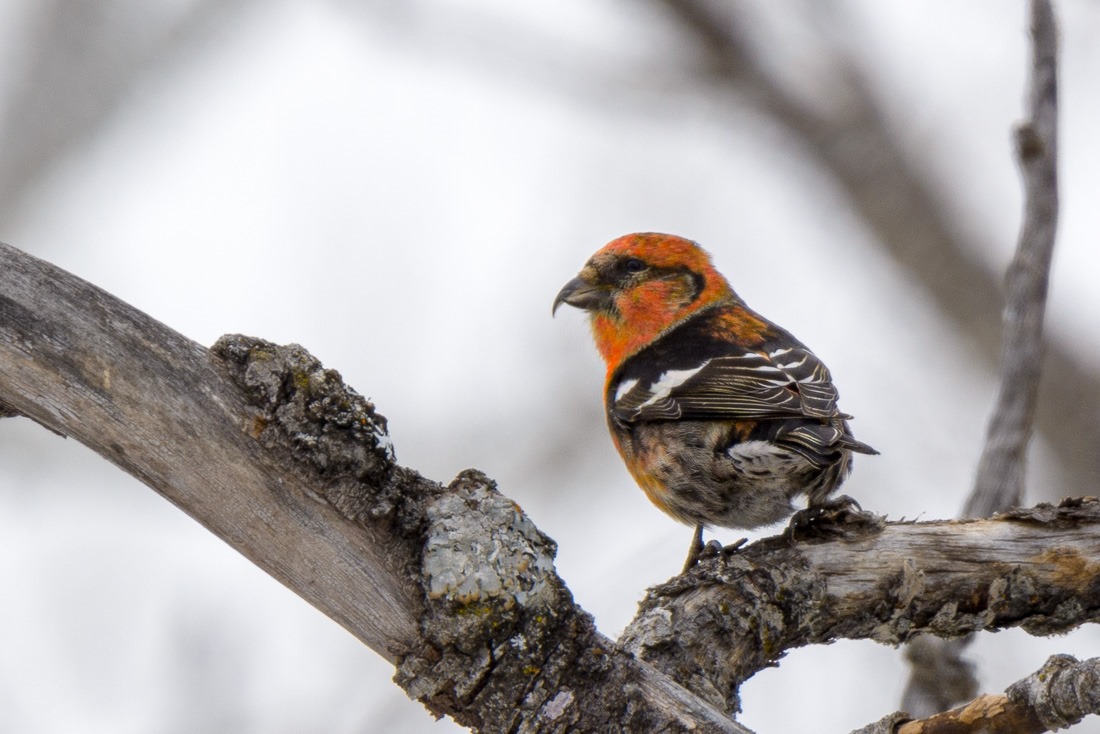 A few miles down this same road, we found the birds responsible for the noise. White-winged Crossbills. Once they noticed us, they were on their way to quieter places. Wow, these birds must really like their tranquility. 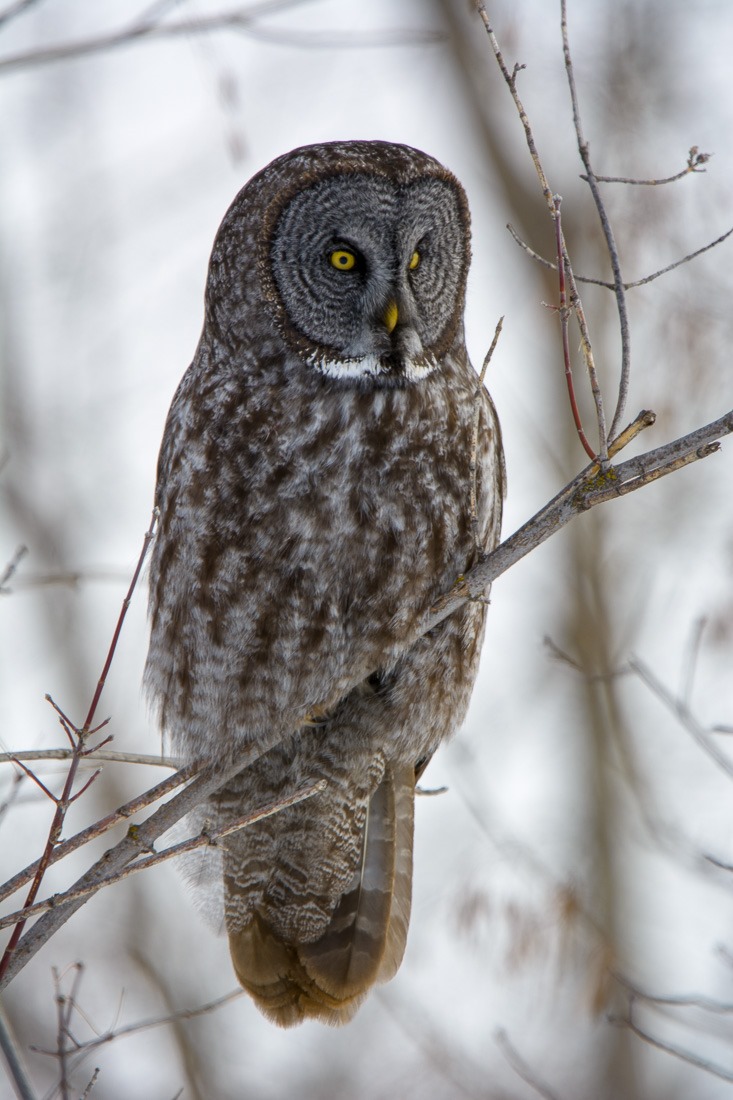 On other roads, the tranquility is only disturbed by some that are on the hunt. Hunting for mice or voles, sometimes even squirrels. The owls here are are mostly non-migratory, they are here all year. Yet in winter, they come out and show themselves. The rest of the year is spent in the woods where nobody can see them. They hunt without making any noise. 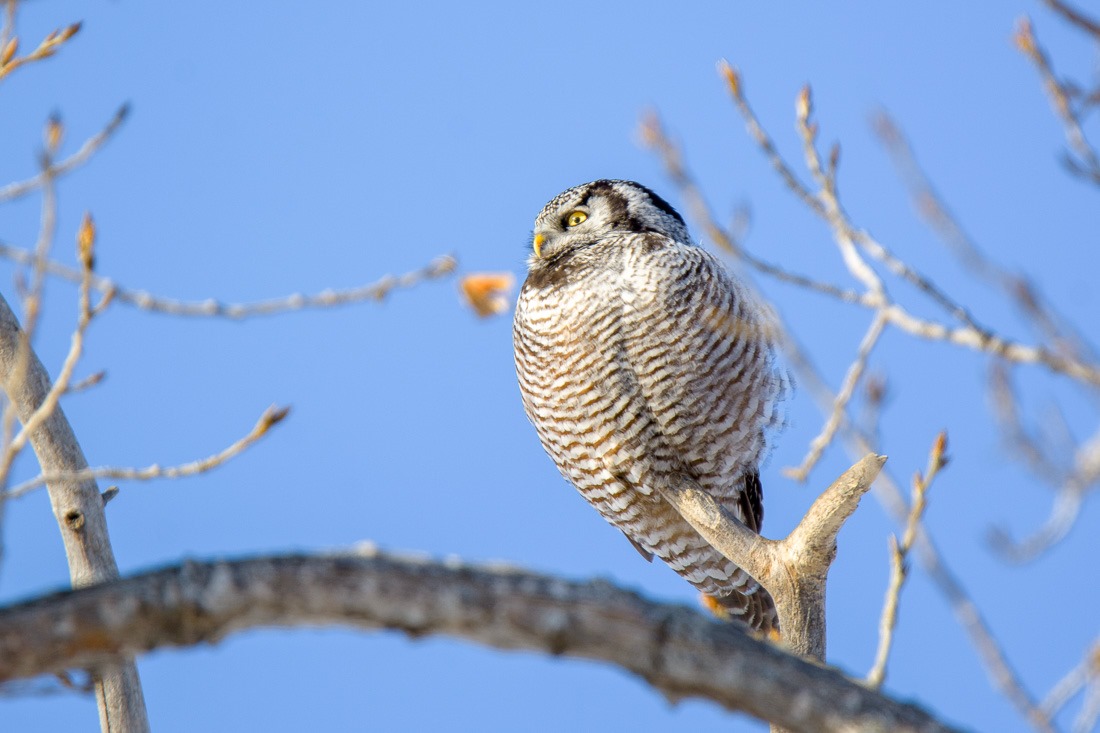 Both the Great Grey Owl and the Northern Hawk Owl are ferocious hunters. When they are concentrating on their prey, humans can hardly disturb them. Come too close and they’ll either fly away or make you regret coming too close for their comfort. A photographer that comes too close should be ashamed of himself/herself, and occasionally will face the consequences (owl 1 – photog 0)

Winter is a time for slowing down and think about life, summer and other subjects. I prefer to keep my brain quiet and go out and shoot. Winter can be so rewarding for those who go out.