Decay is everywhere, not only in Manitoba. In Europe, decay and ruins are all over the place, except where the land is expensive. The Netherlands have very few ruins and even less abandoned barns or buildings. They get torn down pretty fast, so that the land can be reused differently. In Manitoba, however, this is a different story. 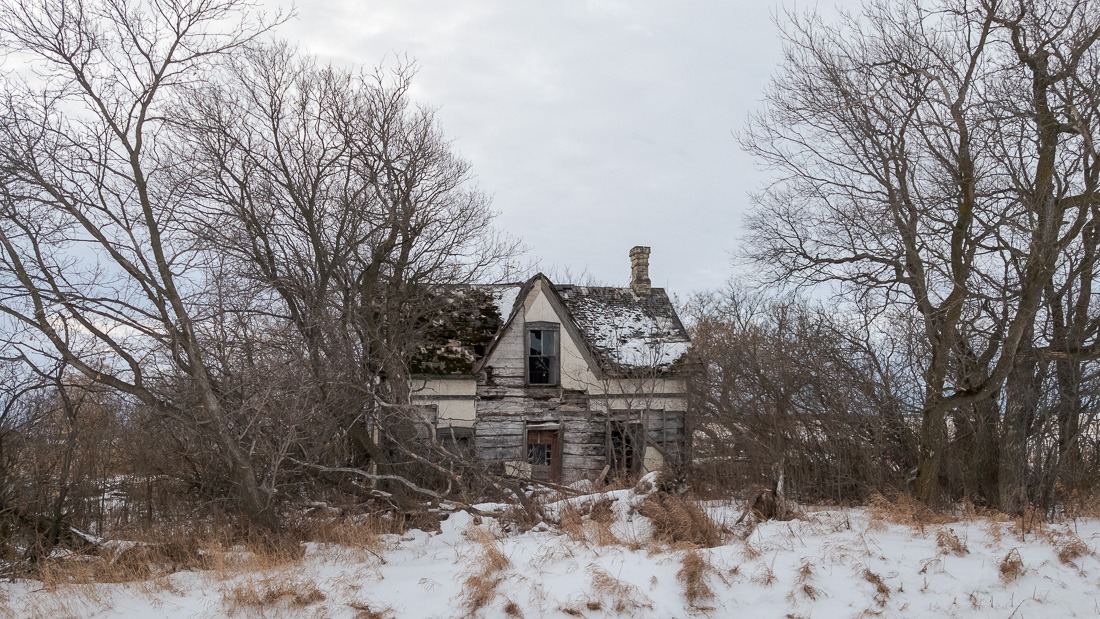 Landowners often like to keep the historical buildings on their land in the state they are in, usable or not.  Whether that is out of a spirit of conservation or procrastination, I can’t tell.

About ten years ago when I arrived in Manitoba, I asked my friends if there were any ruins in the province. They took me to the ruins of the monastery of St Norbert, just outside of Winnipeg. 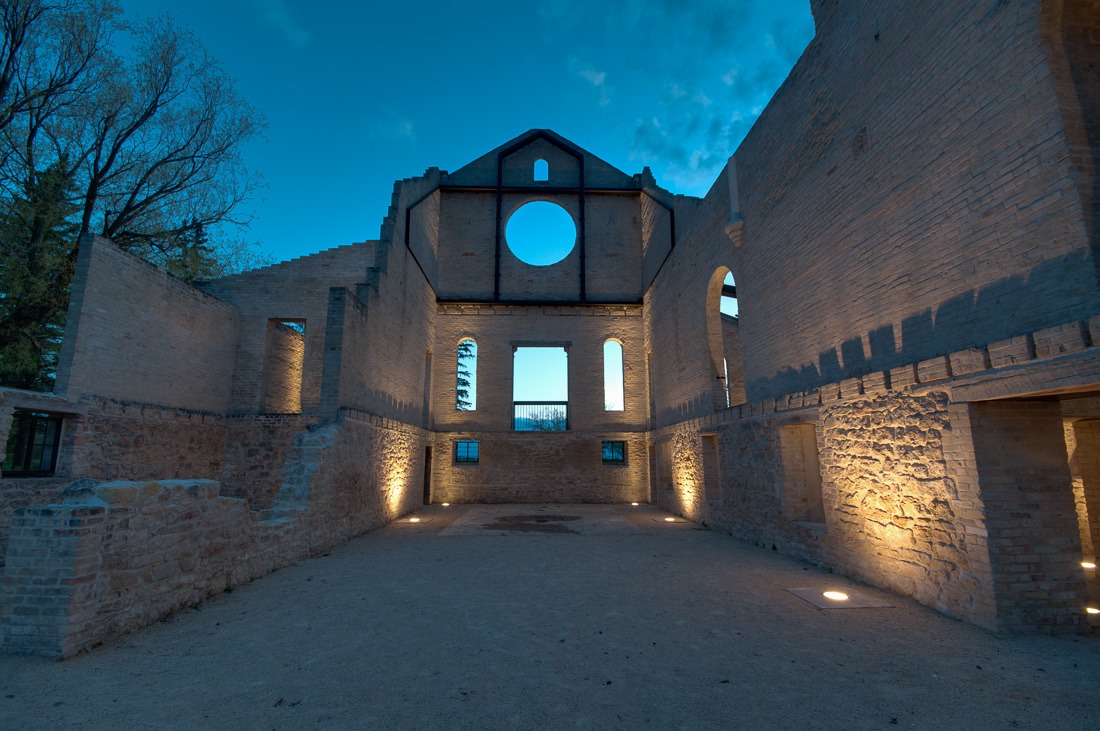 Since I didn’t have a car at that time, my quest for ruins mostly ended there. The ruins of St Norbert are carefully maintained in the state they are in, are safe to visit and explore, even by night. It was not exactly what I had in mind, but it was all I got. Carefully lit ruins didn’t feel real to me. I had still some Roman ruins in mind, even if I knew that the Romans (probably) never had set foot in North America, let alone Manitoba. 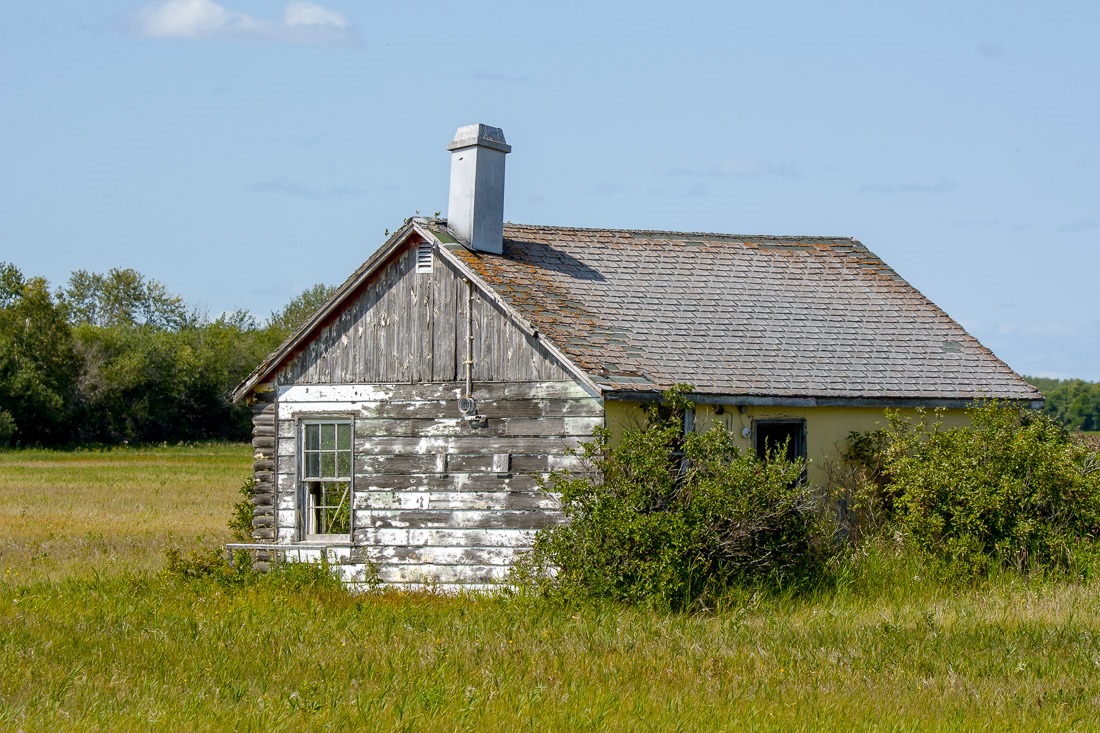 A few years after that, I had my own car and was ready to explore the province. As you can see from the age of this blog, this started around 2009 and onwards. First with some rentals, then with my own car. Soon I found more abandoned, decaying buildings and my interest came back. Friends in my photo community (long since moved elsewhere) made it a life’s work to document all abandoned buildings in the province, resulting in many jealousy-worthy pictures. 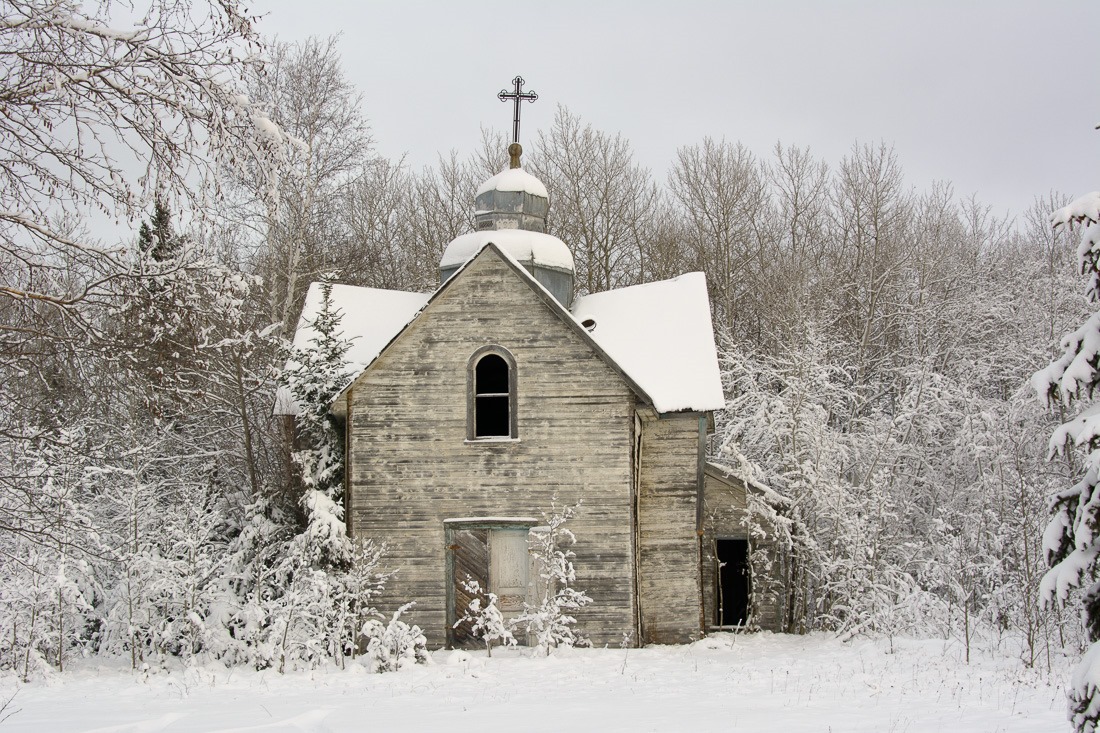 Now, I am not someone to go and break in and enter buildings on private land, I prefer to stay on the right side of the law

. The above church in Sclater, however is easy to access, even with a manicured lawn in front of it. When the snow had gone, I happened to pass by this church again and decided to take a look inside. The state of the floor didn’t inspire me to go any further than the (rotten) door step. 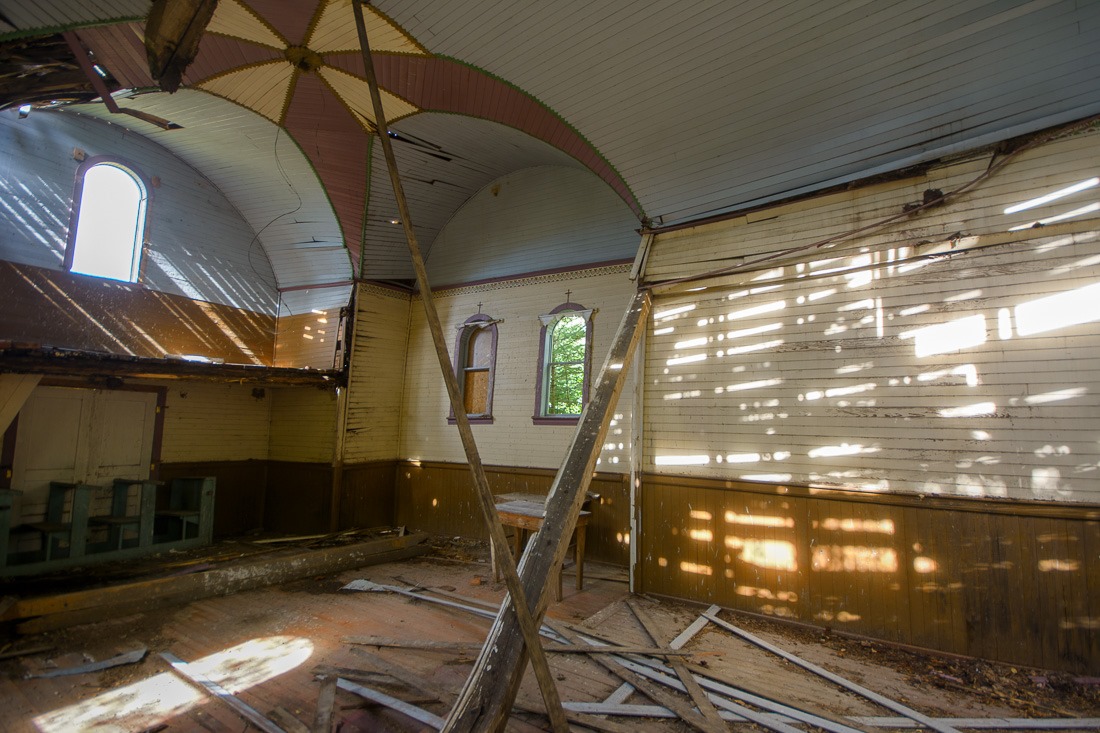 The main beam had collapsed, giving the church its deformed roof line. The main entrance doors were closed with an old pew, just to keep out any faithful churchgoers. After all, nobody in his right mind would take the backdoor to enter a church, right? It still amazes me that nobody ever has come to bring down this church and sell the weathered and aged wood for a profit. 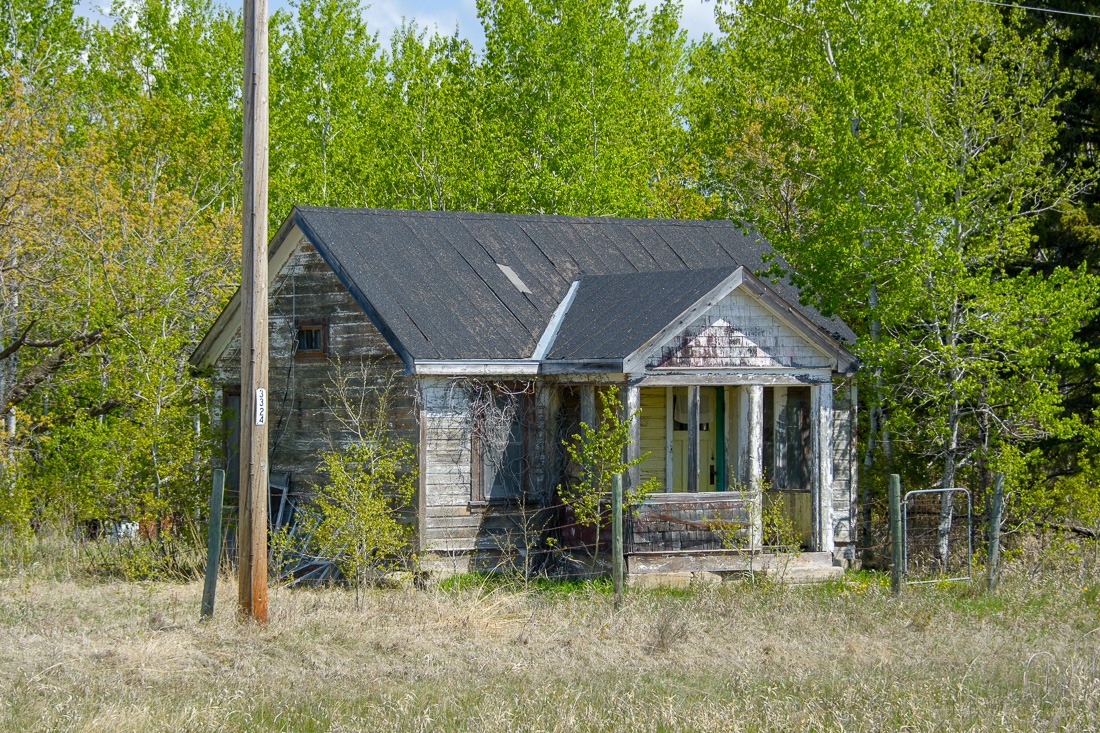 Other places are on private land, like this teacherage close to the Erinside School. From the public road side it looks in fairly good condition, but from the back (where I didn’t go, just saw other people’s pictures) there seems to be not much left. 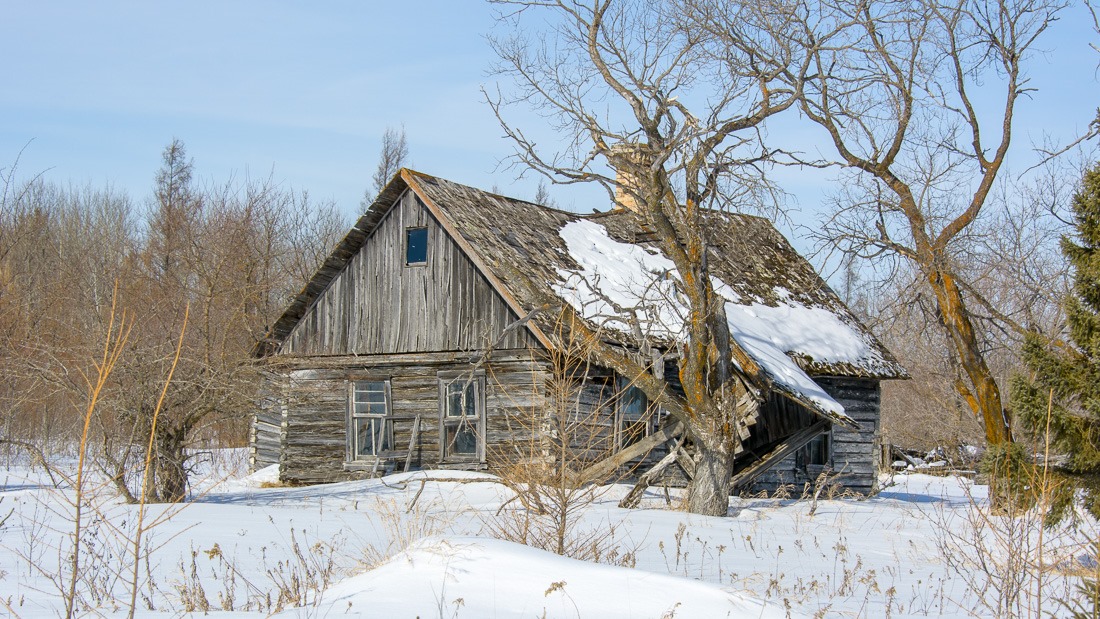 Many houses have been used as a start up place for subsequent building, like this house near “Old 15” an area that has many, many interesting features. Once the main house had been built on the land, this one was left to decay for the pleasure of photographers. If they manage to find it. It’s on private land, so no peeking inside, not even through the windows. 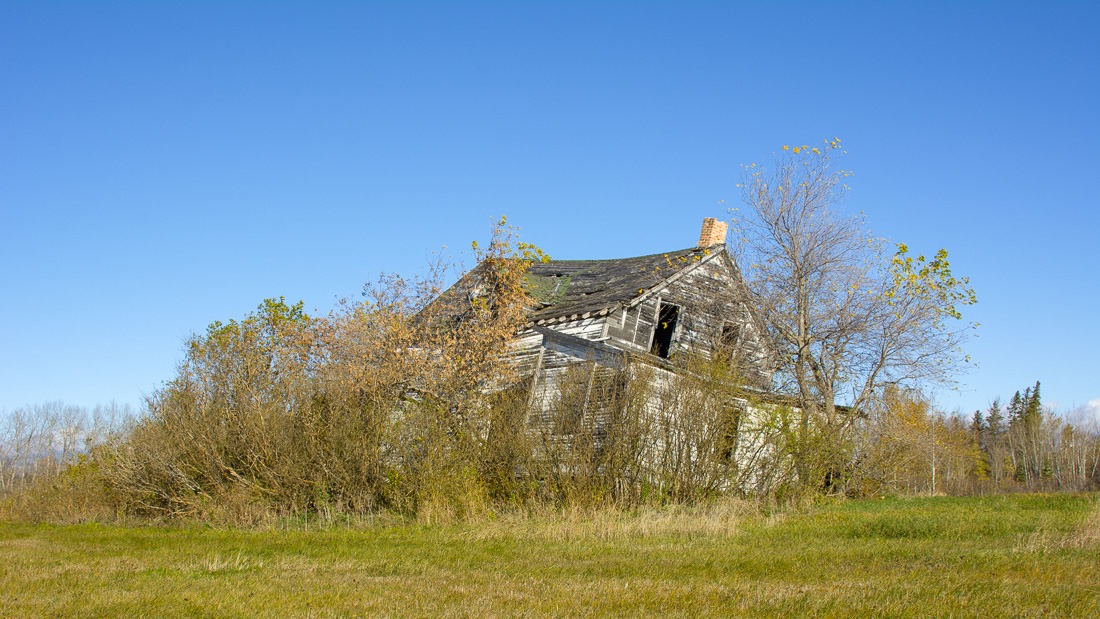 The Interlake (between Lake Manitoba and Lake Winnipeg) is full of abandoned places, some more famous than others. This house on road 222 between Hnausa and Riverton is one such place. I have seen many pictures of this place, although by now the land is closed off, with signs warning that nobody is welcome near the structure. I guess it’s not safe to go inside… 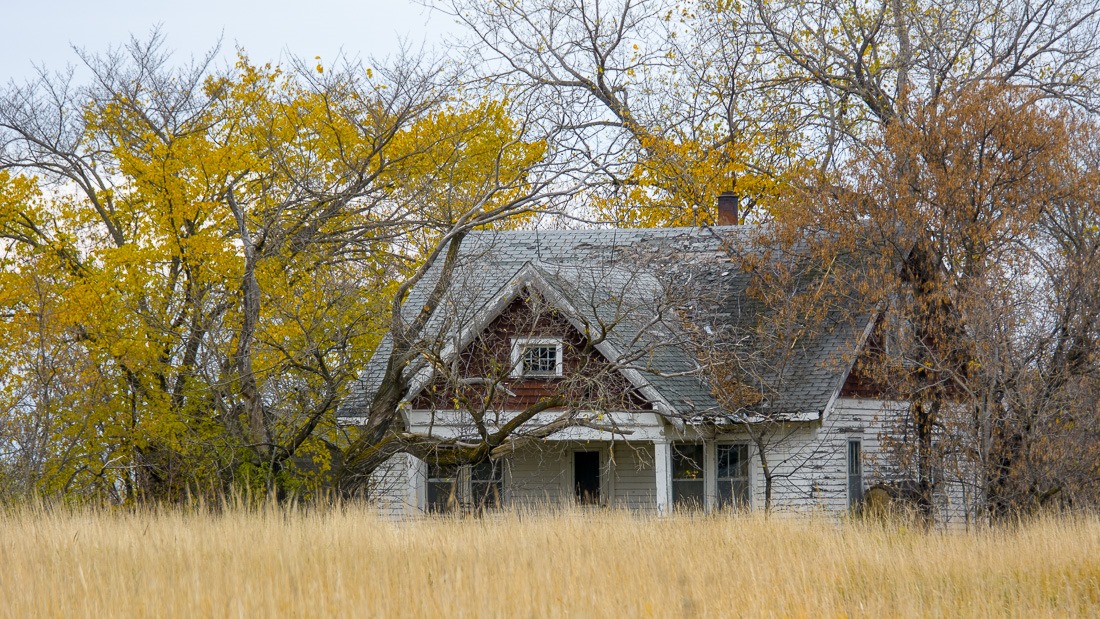 Other houses, like this one near Gimli, MB sits a little off the road and one can miss it very easily. I bet there are many people who take that road and never have looked close enough to spot this house. Approachable, but still on private property, this was as close as I felt comfortable to go. This house has a haunted feeling for me. Better not tempt the devil (or the RCMP). 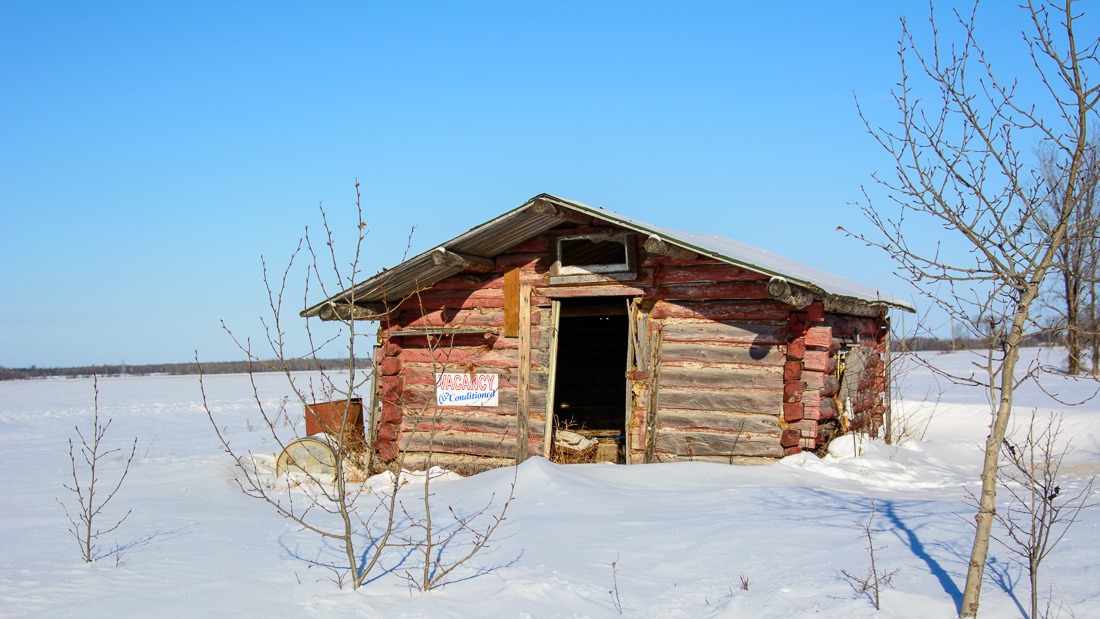 And then you have the very welcoming decaying structures, like this one, advertising and open concept and air-conditioned living. This is an old gem, seeing that the beams are hand hewn and mostly free from rot. As far as the Vacancy goes, I think I’ll leave it like that, I have the impression that that air conditioning is extremely effective to cool things off. 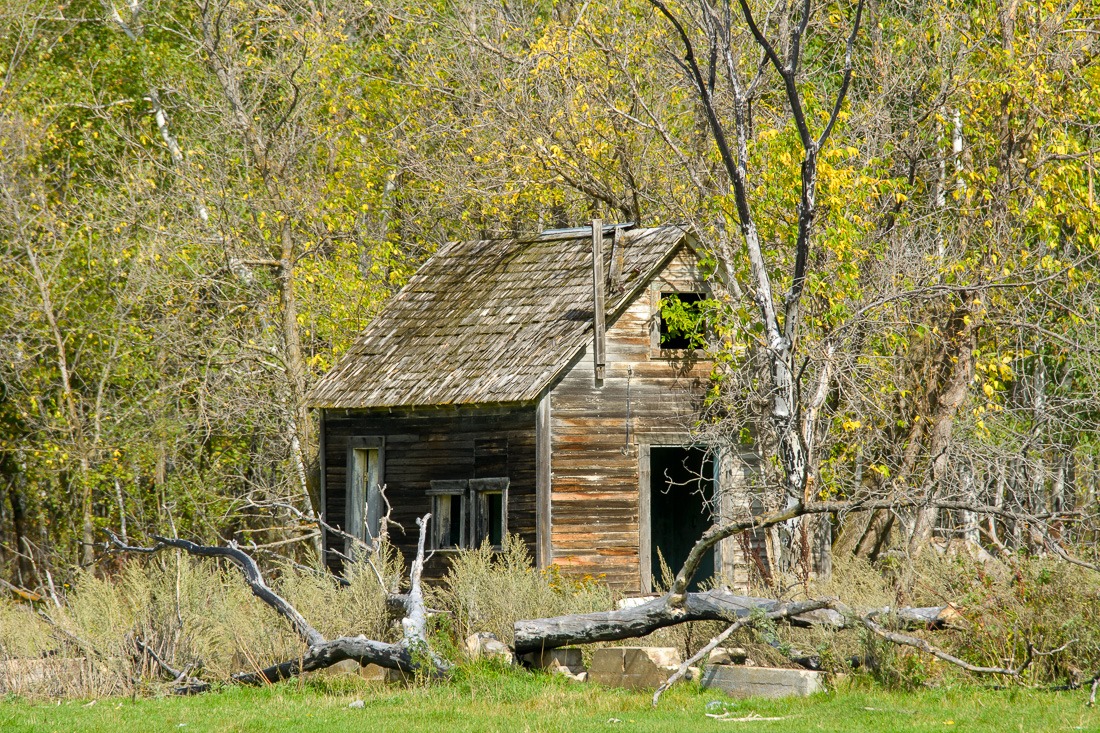 Again on private land, a whole homestead, including this summer kitchen. A structure to cook in when the weather is hot. There is no need to heat the house in the summer when it is hot outside. Cooking on fire inside the house would make it unbearable to sleep in. A separate summer kitchen was the best solution, brought to Manitoba by Ukrainian immigrants. With the advent of air conditioning for everyone, the summer kitchens are no longer a necessity.

My first quest for ruins has now yielded way more results than I would ever had imagined when I arrived in Manitoba. There is way more to find and document, before it is all gone.

Would someone join me on this quest one day?