All over the Internet one can see pictures of skies. From dark skies to clear skies and anything in between. Storm chasers seem to have the upper hand at this time of the year. I have been storm chasing with friends some time ago and had a great time. It’s a  pleasure to be out in the middle of nowhere with people who know what they are talking about. A rare quality in this day and age. 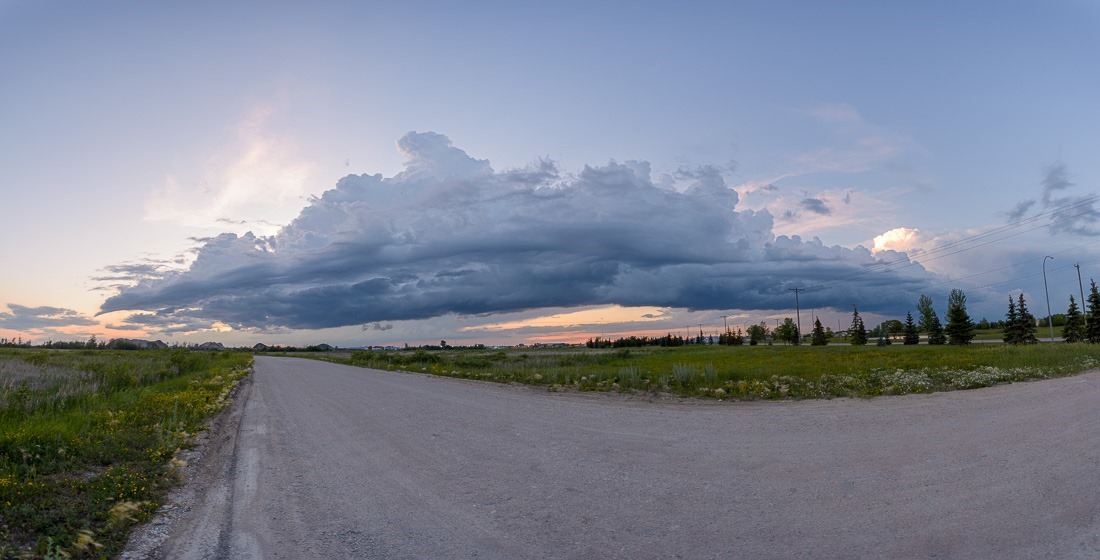 I am not a storm chaser per se, but I do like the occasional chase. But sometimes, the chase only needs to go as far as down the road from the house. A panorama always seems to do cloud formations justice.

Even if the lead picture’s storm system petered out mere minutes after I had taken its picture. Severe weather forecasts also seem to be overdoing it in the last few years. “Damaging hail and strong winds” seems to be a favourite to get people up and running about a mere summer storm. The first time I heard this term, I was seeking shelter under the roof of a gas station, anxiously awaiting the destruction of my newly bought car. When the storm was over, some hail was still on the ground and nothing had blown over. 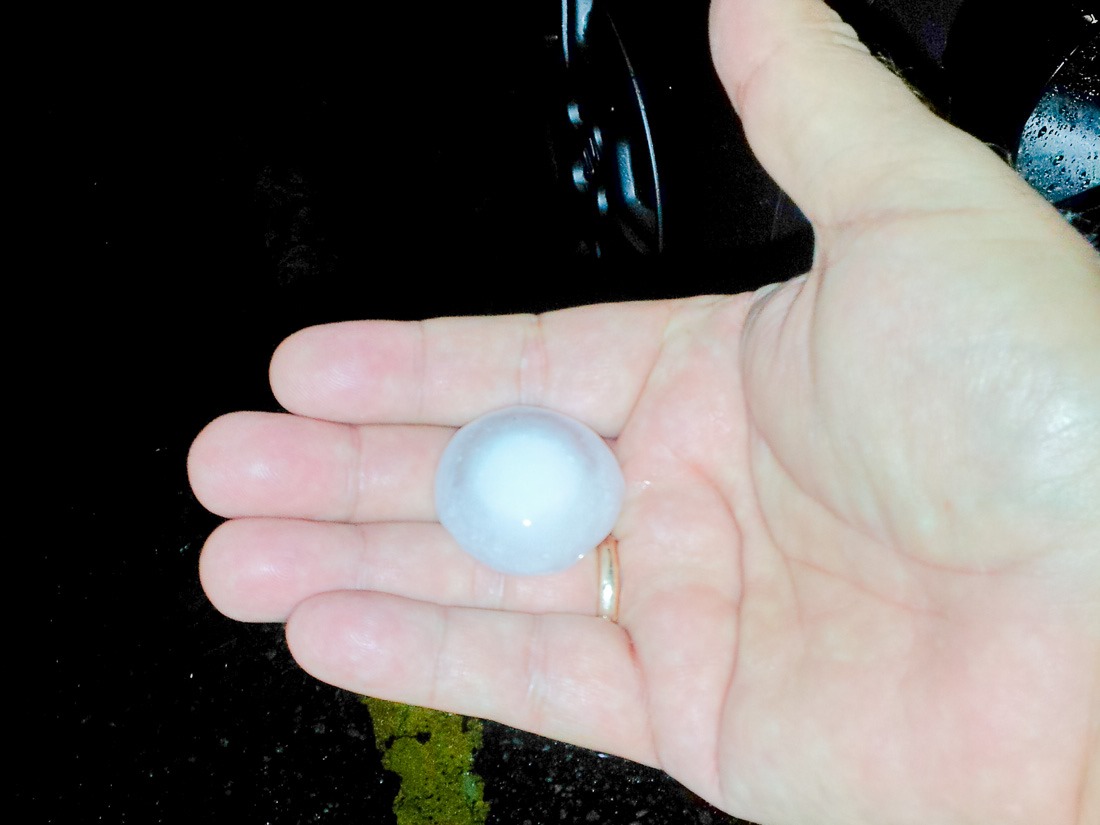 When I got home, the above hail had struck the neighborhood, enough to damage some cars. After that, I always check the forecast for “damaging hail”. More often than not, however, the forecast does not come true. So I have come to think of them as “wishful thinking” on behalf of some people or organisations. But then again, who stands to profit from mass fear for a hail storm? This all happened in 2011, since then many things have changed. 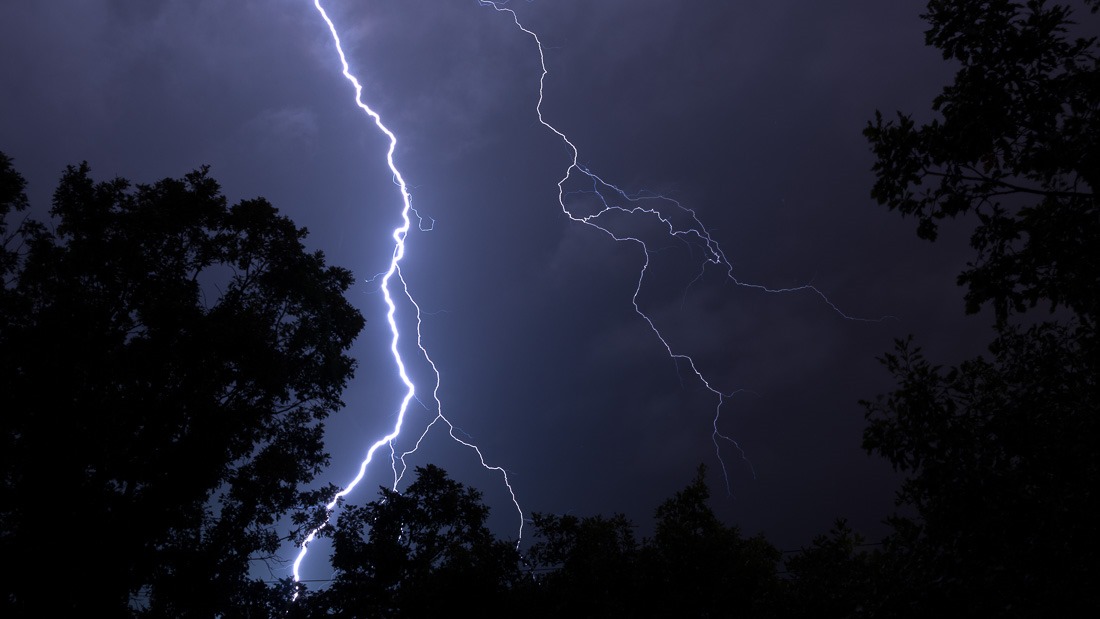 Thunderstorms often are more violent than before, even if most of them are still duds for photography. Funnel clouds and tornadoes are most often spotted near big highways, never in the middle of a field. So one has to think about who is observing the weather and where they usually are located. Along big highways, there are many cars. Most people nowadays have cellphones to record any sign of tornadoes, funnel clouds and other weather phenomena. And they are most often located on the road. So we may be missing out on quite a few funnels and storms after all. It looks like more data gives more severity, but then again, it may have been there all along, just without anyone reporting it. 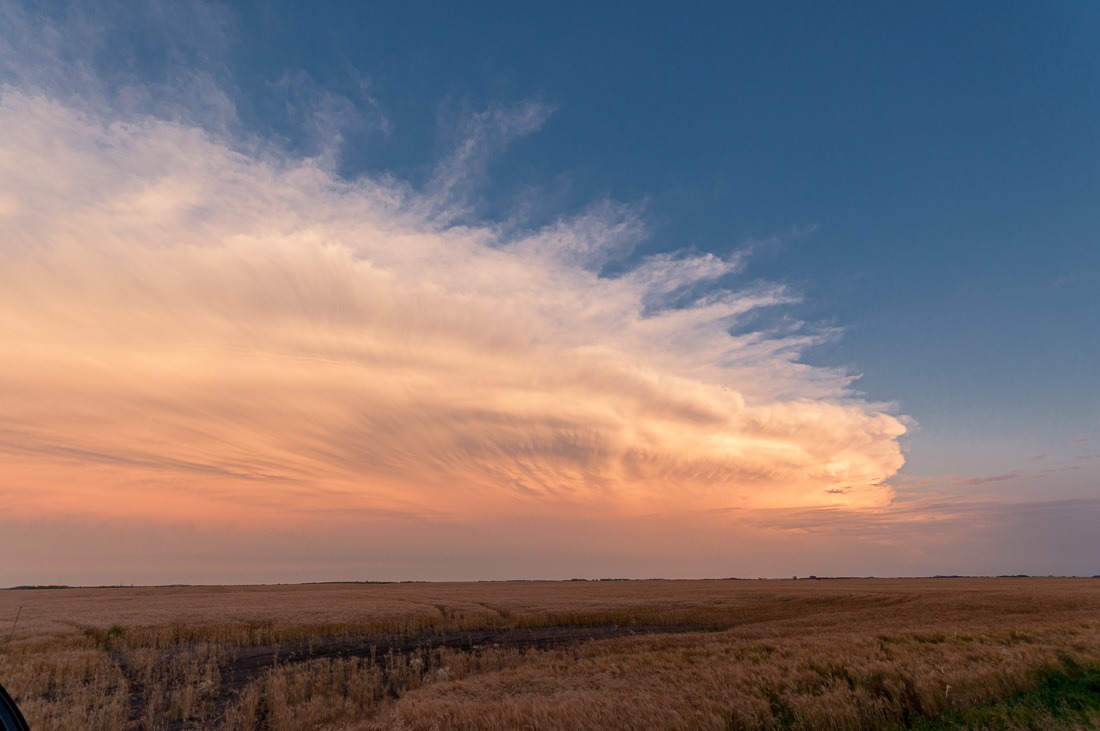 The tornado that wasn’t

To me, the increase in reports and (meaningful) data needs to be approached with a rational mind, tuning out all the noise of media and activist groups with an agenda. One day I might say more about that, who knows

Storm chasing with friends is always better than alone. The above system turned out NOT to have a tornado in it, but in the setting sun it was a beauty not to miss on a photo. The rest of the night we spent chasing storms had a few more surprises, I have already blogged about that some time ago. 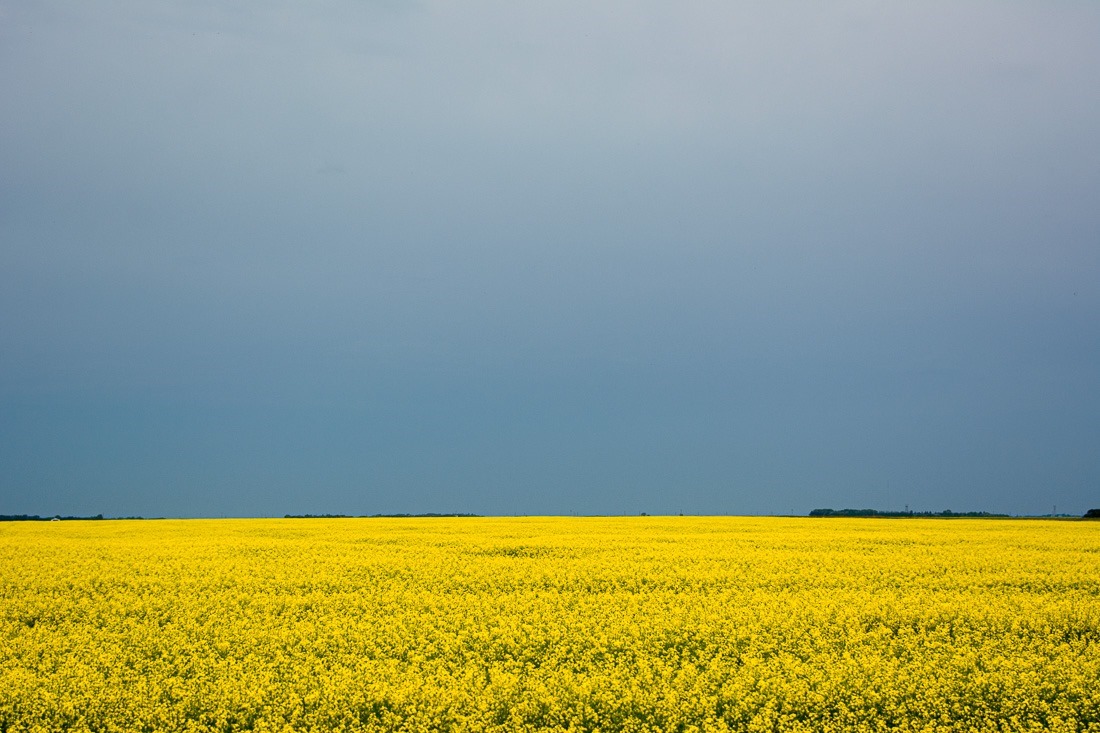 Most of the more threatening skies occur at the end of the day and during the night. Like the above “leaden” sky (plumbeo caelo), seemingly ready to explode in a thunderstorm. It did turn into a thunderstorm, but without any “CG” (cloud to ground) lightning strikes. So I only got a shot of the striking contrast between the canola field in full bloom and the menacing sky. 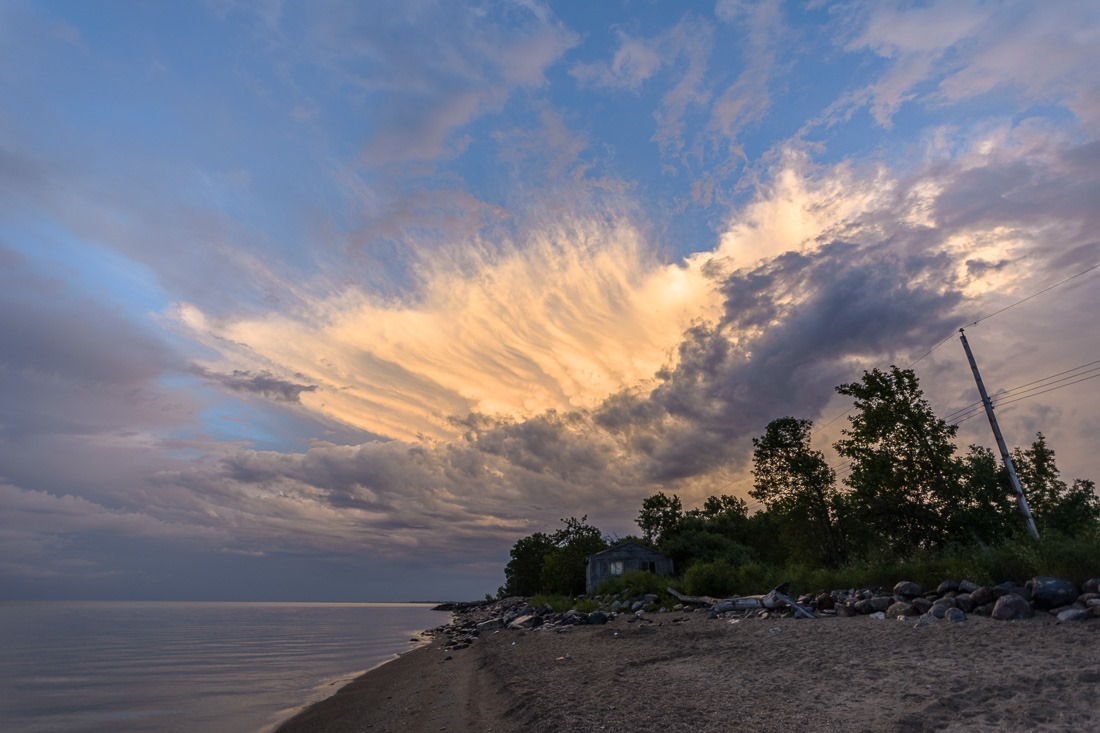 Many times have I seen the form of a “splash” in the sky, as if someone had thrown a rock into a big cloud and made it splash out in all directions. These fire tongues over Chalet Beach were such a splash and were amazing to see. Yet a few minutes later, there was nothing left. Right place, right time, I’d say. 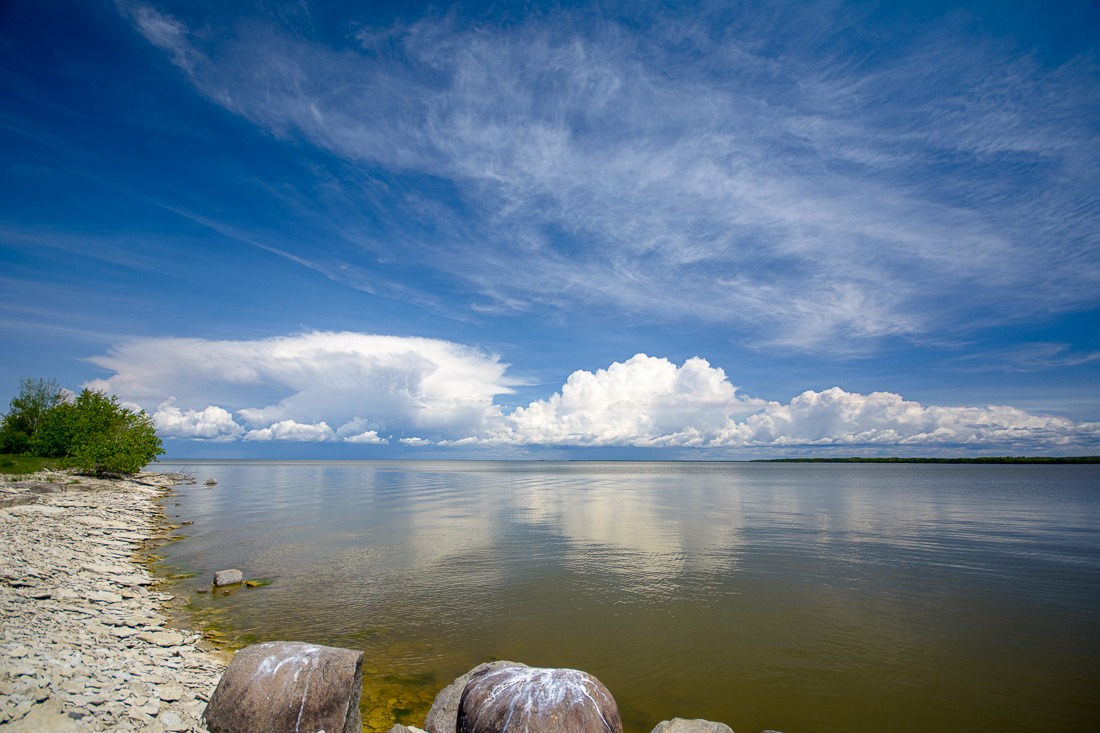 And then you have the distant storms. The ones you only hear if you listen intently. This one was over Lake Winnipeg, south of Matheson Island. Some lightning strikes could be seen from far away. Just way too far to get a decent picture of. The contrast between the thunderstorm raging under those clouds and a clear blue sky where I was standing was amazing. The rocks in the foreground could have been cleaned up a bit, but that is just an afterthought 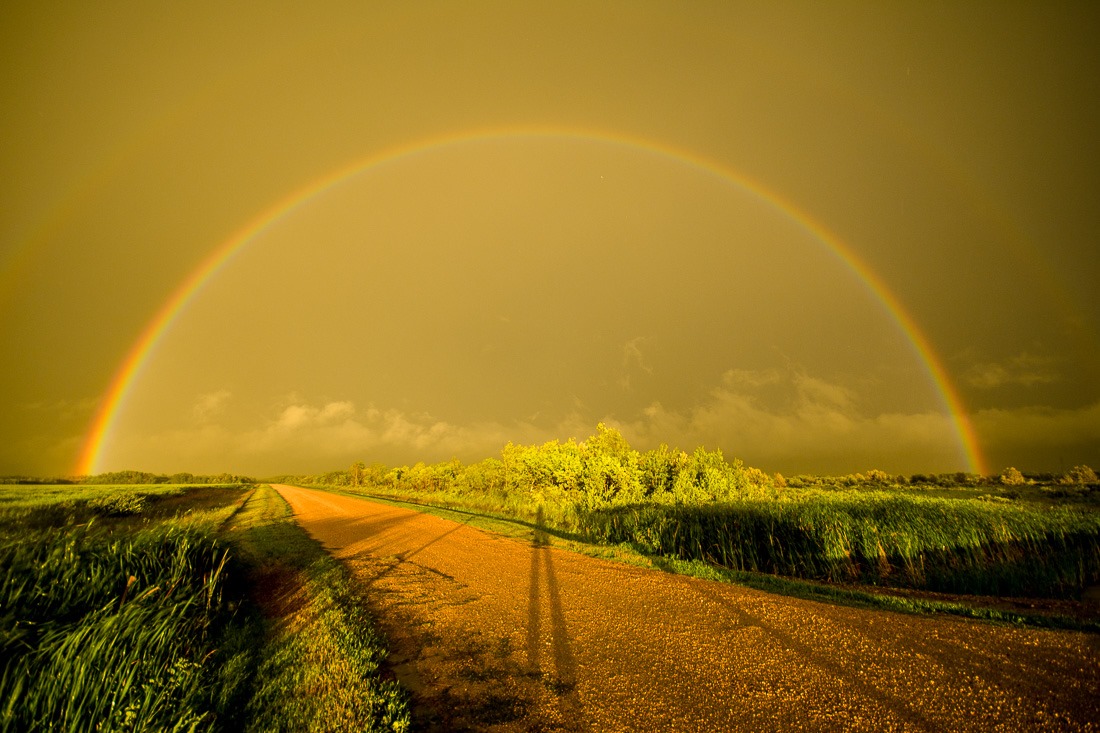 And then you get the storms that you were chasing, only to understand that the storms had been chasing you all along. The day we were cowering inside our parked vehicle on the side of the road, admiring the horizontal rain and hail passing in front of the windshield was just one of those days. Later we heard reports that a tornado or at least funnel clouds had been spotted inside the system. Only the tail end of this storm yielded some great pictures. 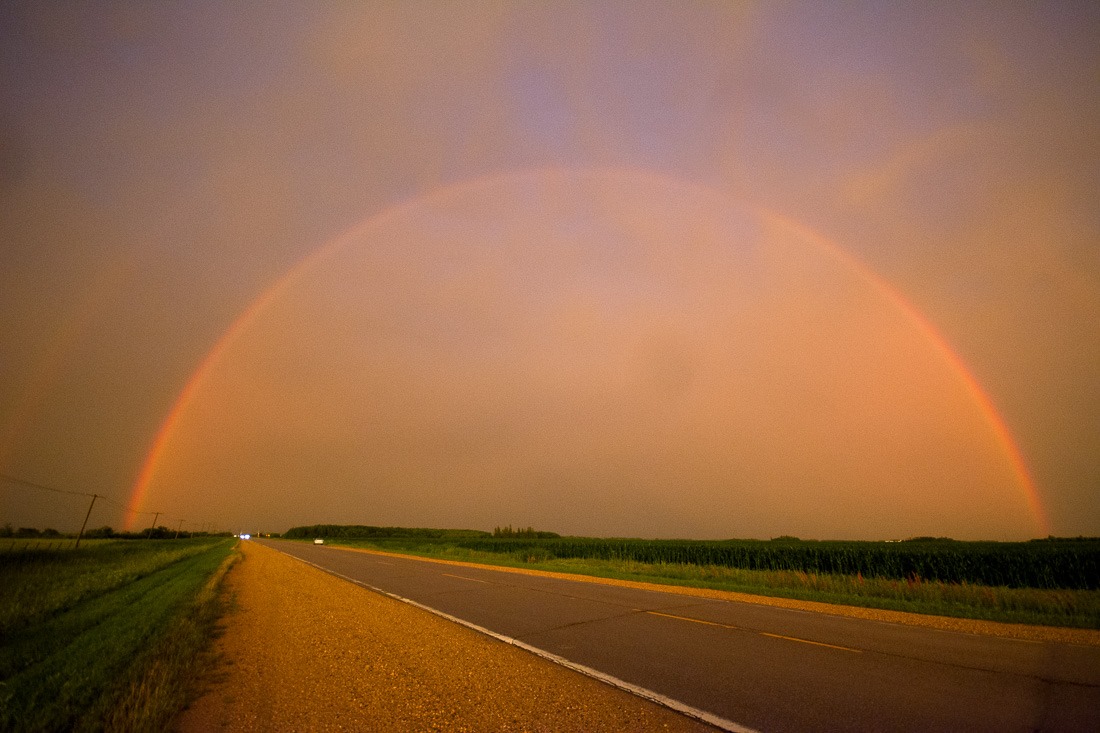 In the right place, at the right time, storms will often give this gift of a rainbow. Unbroken by anything, just an arc of colours, just for you. And nobody will ever get the same picture of that moment in time. I think that nothing will surpass the prairie skies, anywhere in the world.

But that is only an opinion, not fact. Right?