For people living far from any sea shore, the waves and the wind are kind of out of reach. Ocean shores do have something magical about them. There are immutable, yet always different when you visit them. Canada has thousands of kilometers (or even miles) of coastline, yet most people don’t have the enjoyment of them. 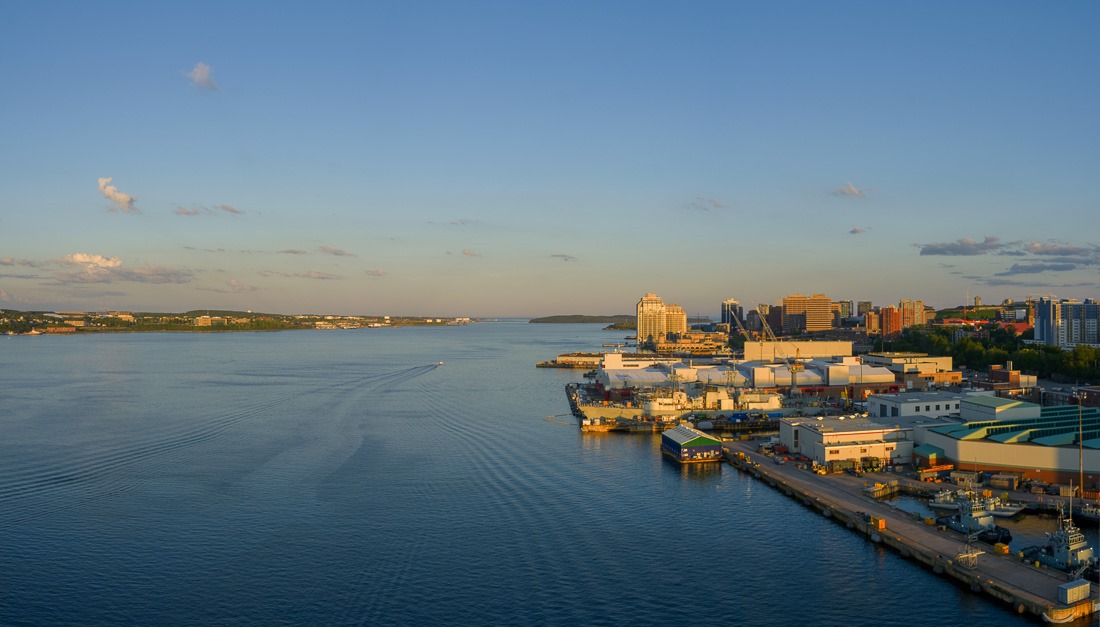 Like most countries in the world, the biggest cities are inland and away from the seas and oceans. People living there don’t get to enjoy the waves and the salty wind anymore. To counter that, here are some views of the Atlantic Ocean for you to enjoy.

People who know me know that I have lived on the coasts of the Mediterranean for a few years. That was an experience to never forget. Although my house was oriented north and got blasted by the infamous “Mistral”, the salty winds (and silt spray on my windows) has ever since made me want to go back. At least to some similar environment. 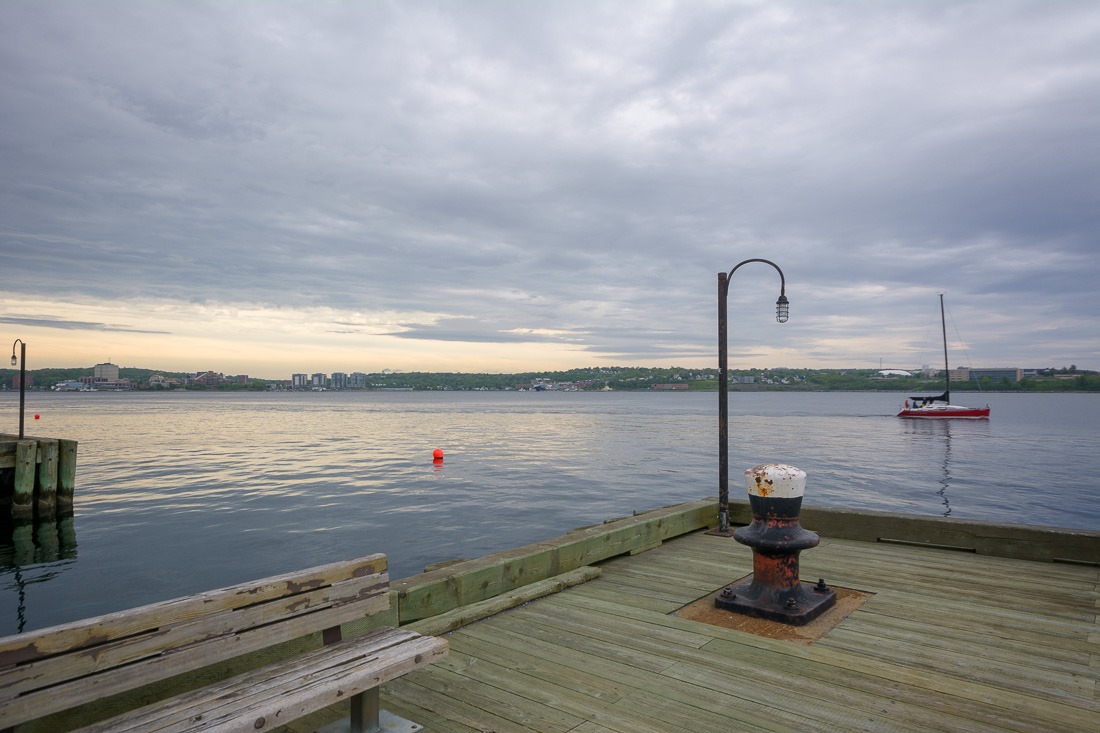 View off the dock

As irony wants it, I now live in Winnipeg, the furthest away from any sea on earth. A vacation to the sea has been on my list for a long time and a few weeks ago (already!) I was finally  again near the sea. I was born Dutch, about 20km away from the nearest sea. As history would have it, I seem to have licensed pirates in the far back history of my family. Myself I have never been a seafaring guy. I do enjoy trips on boats and ships immensely. At least when there is some spray from the waves to be had. I’m not sure I would enjoy any cruise ship that never shudders on even the roughest seas. 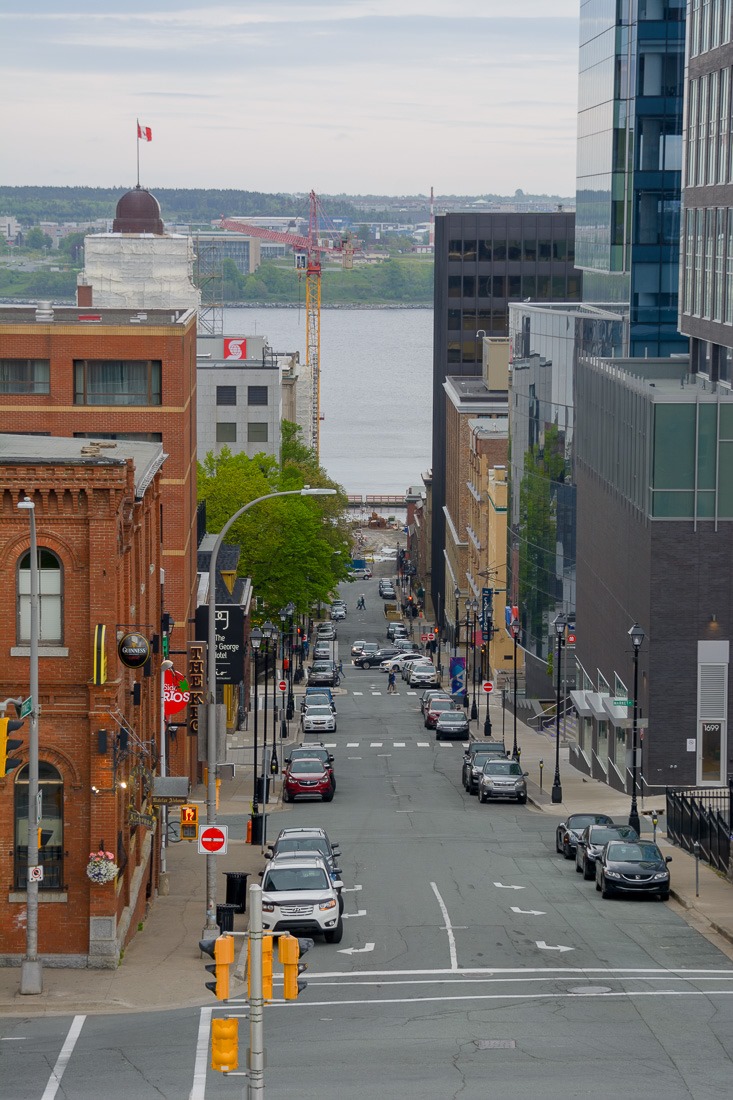 Down to the waterline

So my latest trip to the sea brought me to Nova Scotia and of course Halifax. The old, historical I should say, city reminds me in some ways of European cities along the coast. Yet somehow it’s different. The European cities are old, and somehow, abandoned. Not in the real sense of the word, but they seem devoid of activity. There is no longer any fishing activity, everything is automated. No more fishing boats coming to the harbour in the early morning, selling their catch. The only place where I experienced that was in Marseilles, in the “Vieux Port”. Nowhere else. 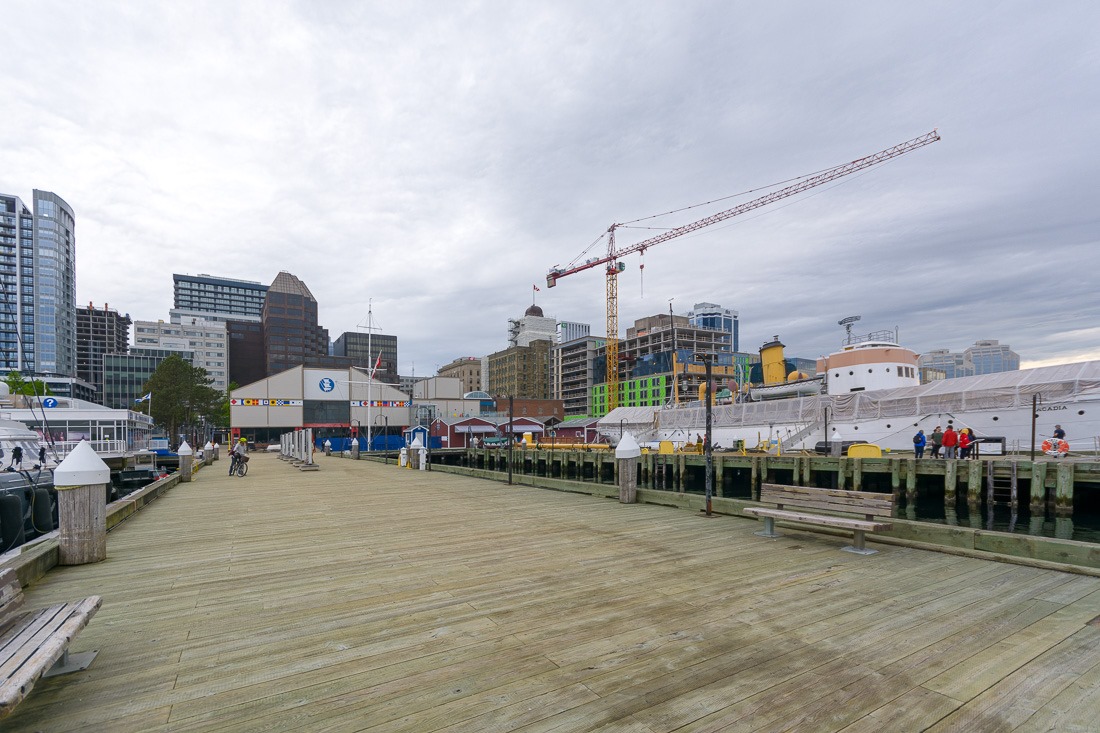 Waterfronts seem to not be the attraction in Europe. Perhaps for political or economical reasons. Then again, it may have changed in the last twenty years I have not set foot in Europe. Halifax, on the other hand, is bustling with life on the “Boardwalk” a place where buskers and other artists try to catch your attention. The fact that part of it is renovation makes no difference. Instead of simply closing off a section, they built a “sea bridge”, leading you over water to the other side of the construction site. 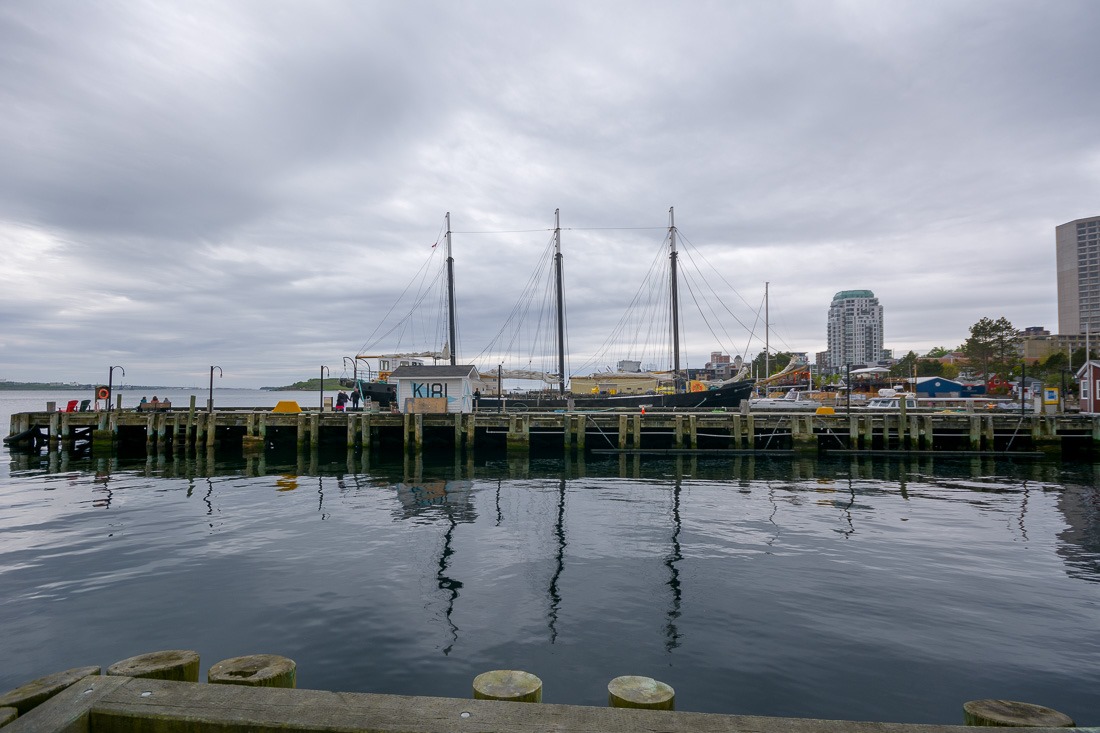 The view of the docks is perfect. Just the right amount of people and activity. You don’t stumble over other people, and you can take your photos at a leisurely pace. If you bring a tripod you also want to make sure they don’t stumble over you 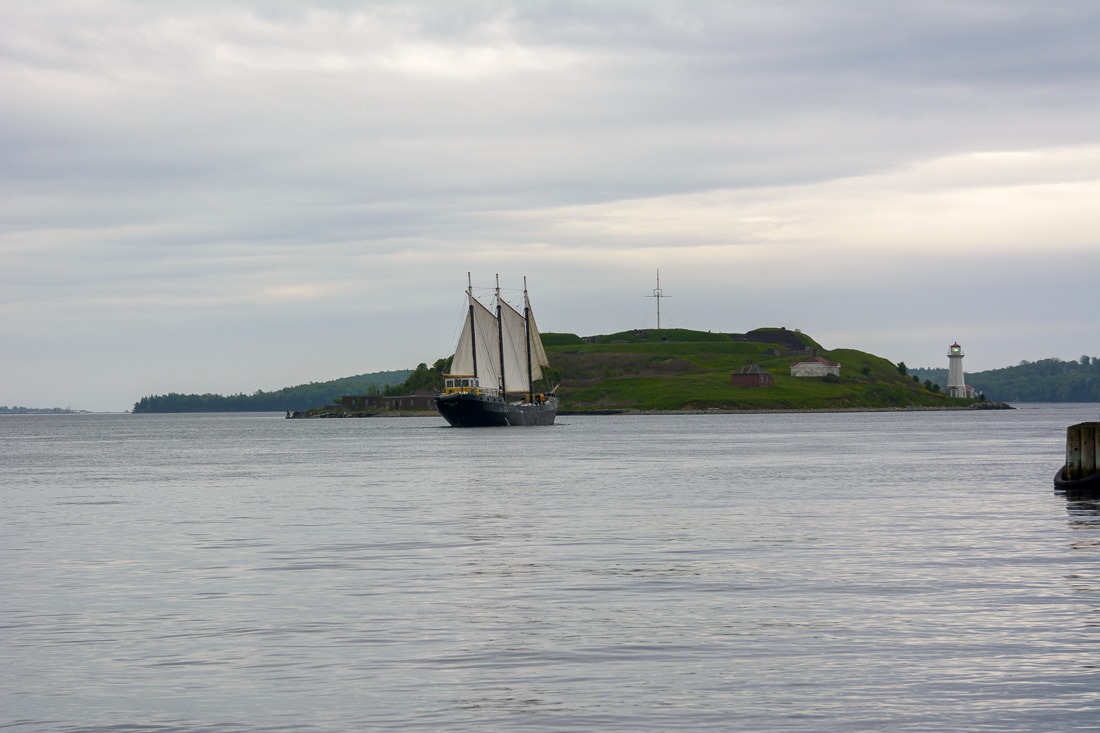 The Halifax Harbour is also home to numerous historical ships. There’s always a few of them to be admired during the day. Depicted here is the “Silva” seemingly always on manoeuvre in and around the harbour. If framed properly, all of the modern harbour can be ignored, giving place to a real original “200 year old” shot. Shot in digital of course…

When you leave Halifax, the roads are good. I have to state that, as people in Manitoba may have the impression that roads are to be bumpy and filled (so to speak) with potholes. Only the smallest back roads in Nova Scotia seem to have potholes. Most certainly not the main roads and highways. Some of these roads lead you along small coves and inlets, a real heaven for photographers.

This view of Callahan’s Cove, for example. It’s easy to miss if you just drive past it at only 50km/h. I must say that I hardly ever drove any faster than that on any of the sightseeing-able roads in Nova Scotia. There is so much to see. To see and to miss as well. Drive too fast and you miss out on perfect photo-ops. Even at my (for locals, at least) slow pace in the car, I must have missed numerous shots. I guess those missed shots should be on my list for next time I visit the place. 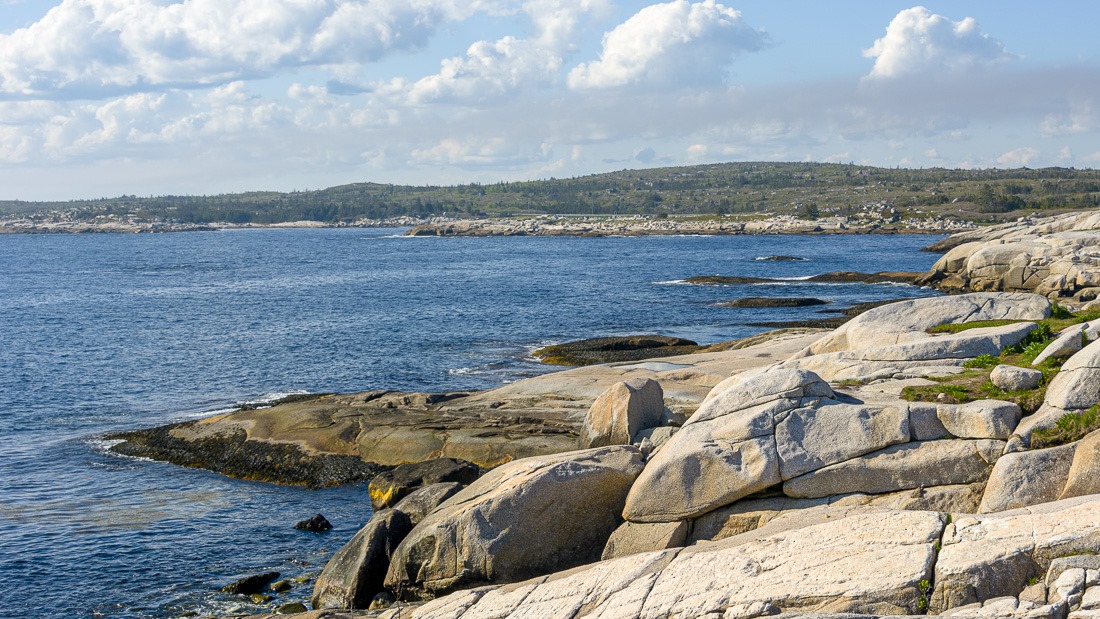 Flipside of the lighthouse

The further away you go from Halifax, the more rugged the coast becomes. Above is the view away from Peggy’s Cove’s Lighthouse. When you look at an iconic subject through your viewfinder, there is always something at the opposite side to shoot as well. Iconic objects are often built in iconic places. All of which “belongs” on my memory cards 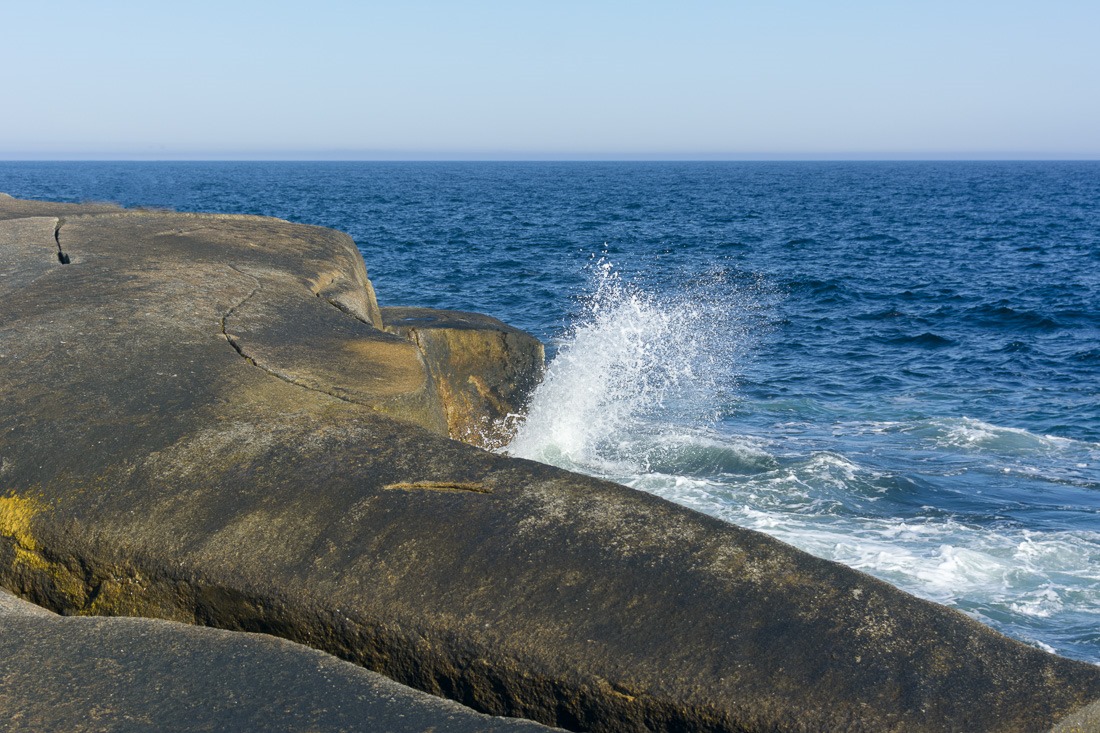 Already on the parking lot at Peggy’s Cove you are warned about waves and black rocks. Here is a view of both. This was on a very calm day, hardly any wind. You can see the water blown upwards to 5-6 meters, imagine you are at the front of that wave, being thrown onto the black rocks. Probably not a good experience. The blackness of the rocks are algae, not pollution. Once they algae are wet, they are extremely slippery, and there is nothing to hold on to… So I heeded the warning and stayed safe. Safe enough to write about the experience 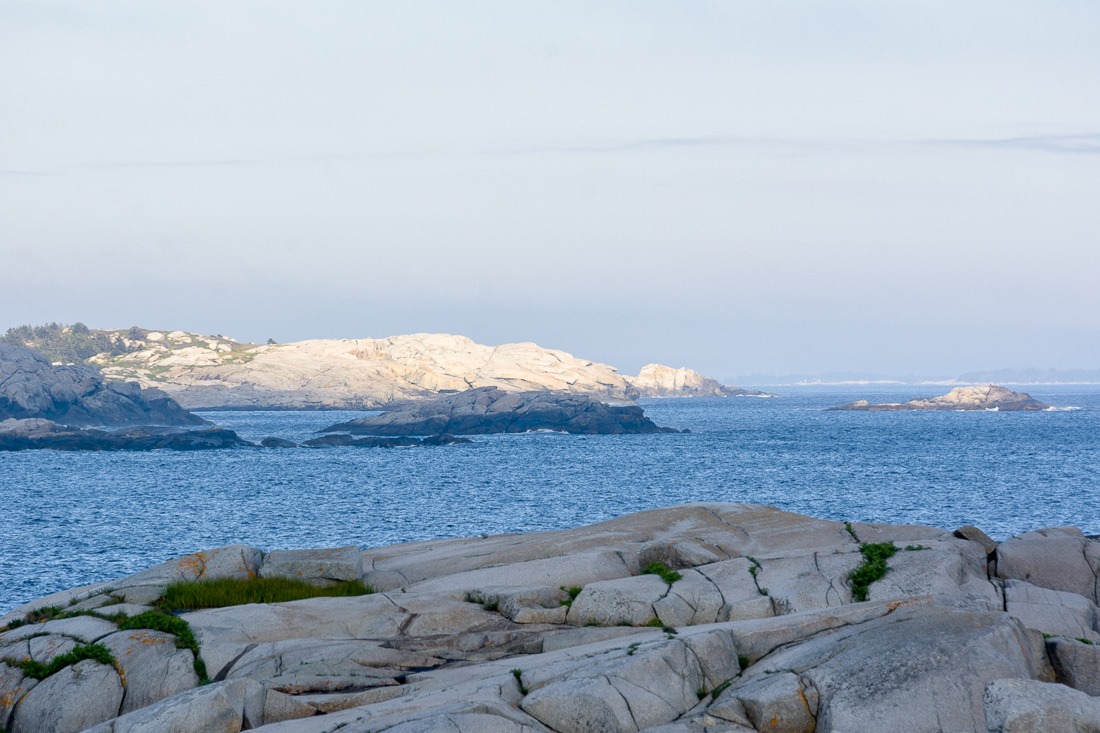 Another view of the rocks and the shore around Peggy’s Cove. Little vegetation to be seen. Just plain, beautiful, unforgiving rocks and a lot of water. That’s the way I like my seashores.