Something that doesn’t belong in a given time period. Cavemen eating with knife and fork, for example. Once in a while in Manitoba we have a whole festival of anachronisms, although the word itself is never mentioned. It’s a time where festival goers dress up for the period and often miss a few items, like a camera or a pair of glasses. 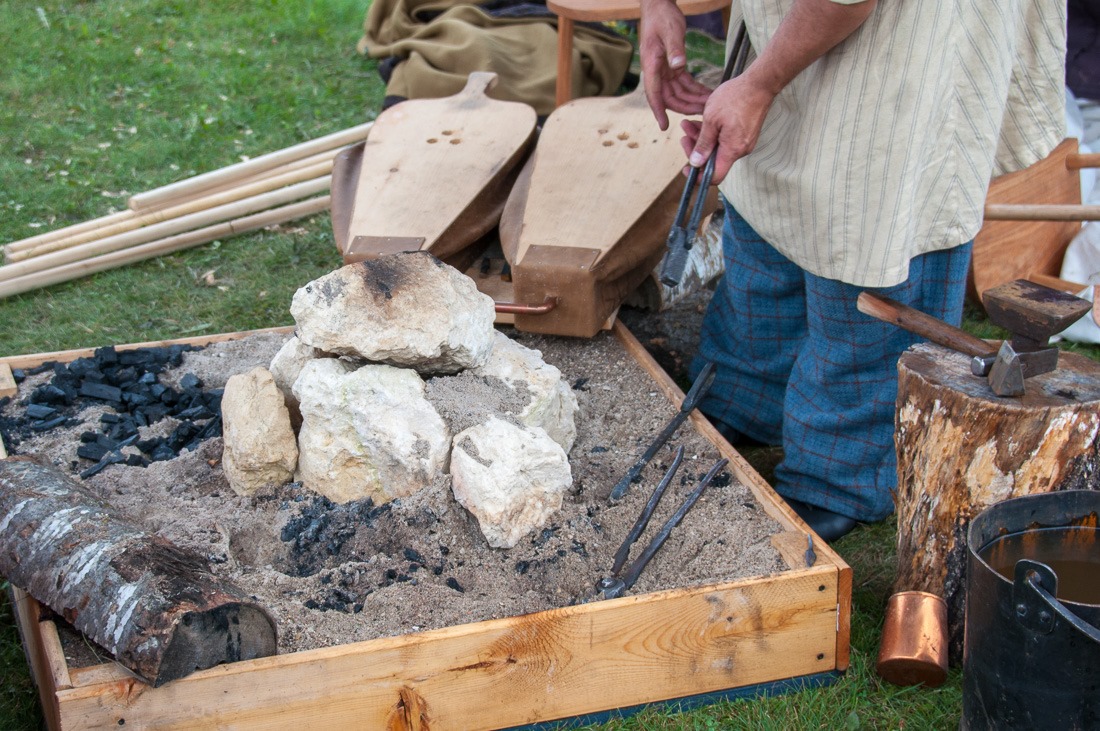 I always like to pick out these details. Others dress up completely for the part and don’t get out of character at all.

In Gimli, each year the Icelandic Festival is held and people come from everywhere to see how the old Vikings lived. From what we can see, they were pretty comfortable and had everything they needed, including cellphones 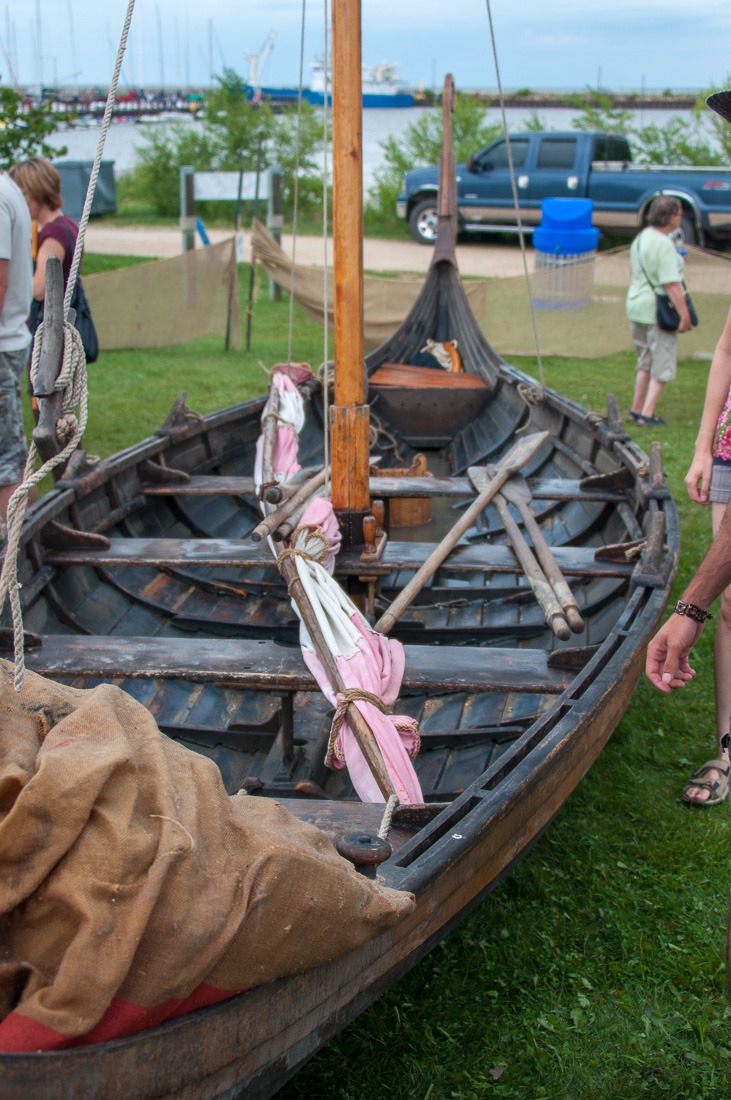 Small boats are displayed as well as a handful of crafts and lifestyles. For a photographer it’s hard to get a shot “from the time period” without getting else in it as well. I’m pretty sure a Dodge Ram was not very well-known with the Vikings. However, to see the old artefacts that have either been dug up of imported here from Europe is quite a pleasure. 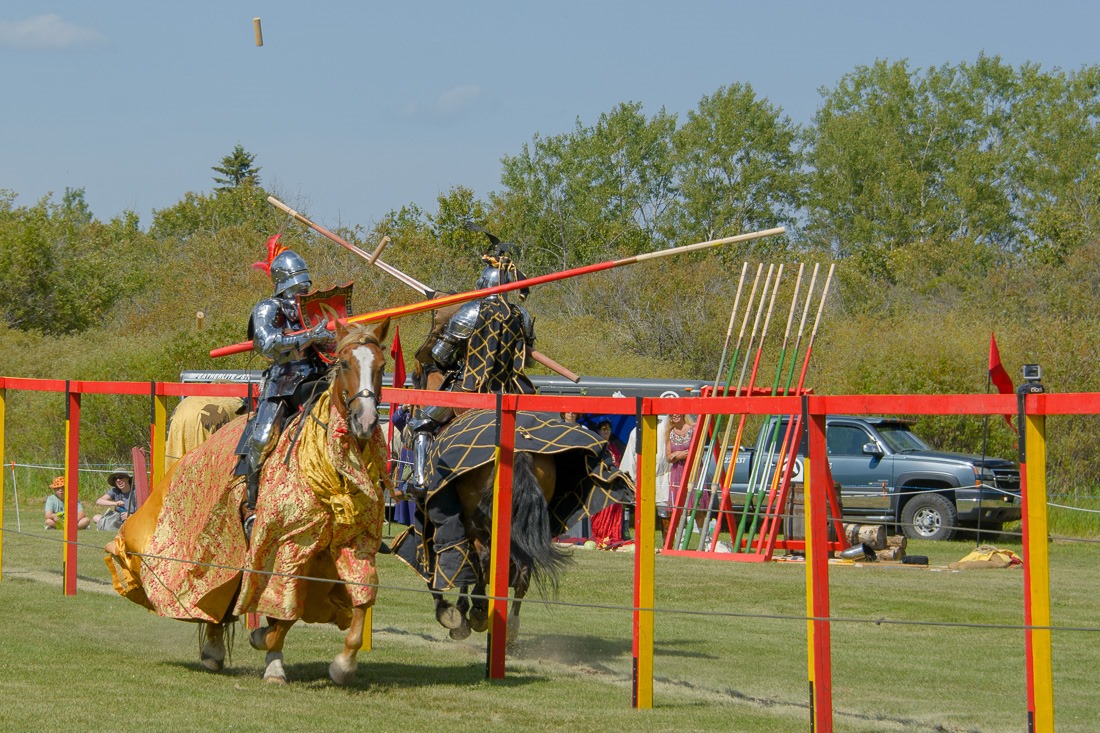 Another festival is held at Cooks Creek every two years. The Medieval Festival celebrates the period of the Dark Ages where knights went head to head with each other for a girl’s good looks. It didn’t even have to be a Queen or a Princess, as long as the girl had some background, the excuse to fight was there. While today those fights are a little less deadly, the lances are made of Balsa Wood to avoid any splinters in the jousters’ eyes (King Henry II of France was not so lucky), the blows are no less violent. Pieces fly around like in the above shot where the two jousters had just made “contact”. 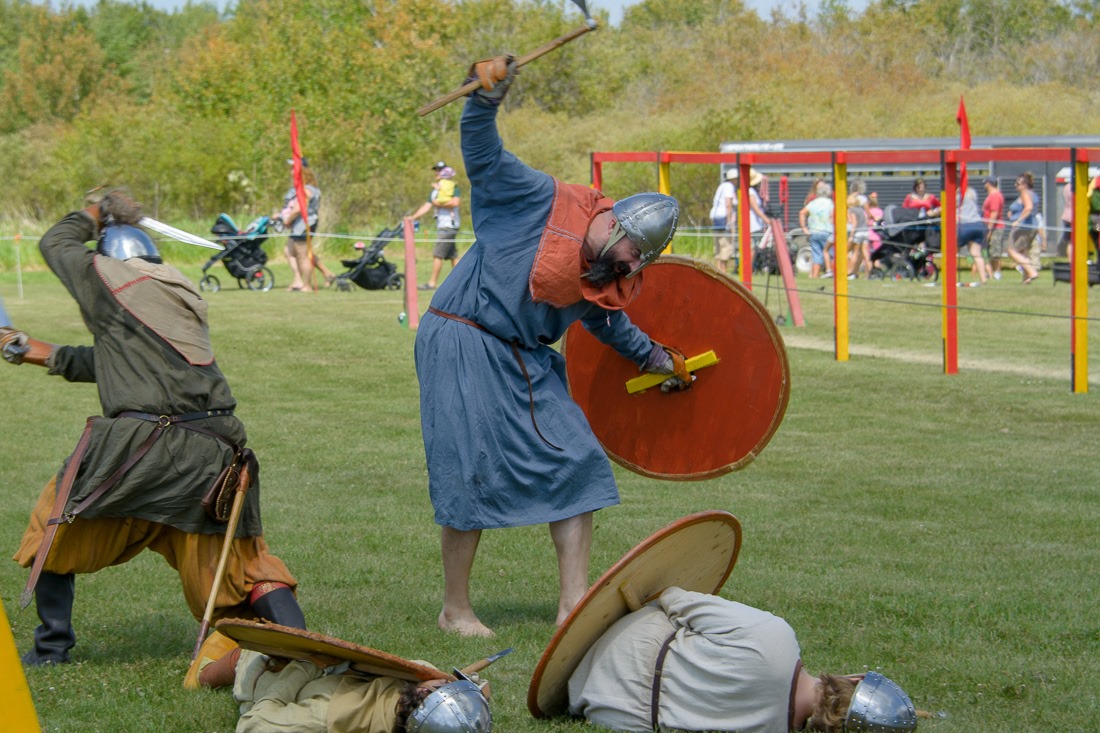 Fight to the death

Lesser fighters don’t have the horses and will energise and entertain the public with equally simulated fights and “deaths”. Apparently finishing off the opponent was totally allowed back in those days

. The act of “finishing off” an opponent was often done with an extremely sharp weapon called a Misericorde. It was far better for the souls of the survivors to end the misery of the defeated than to hear them screaming through the nigh until they died. 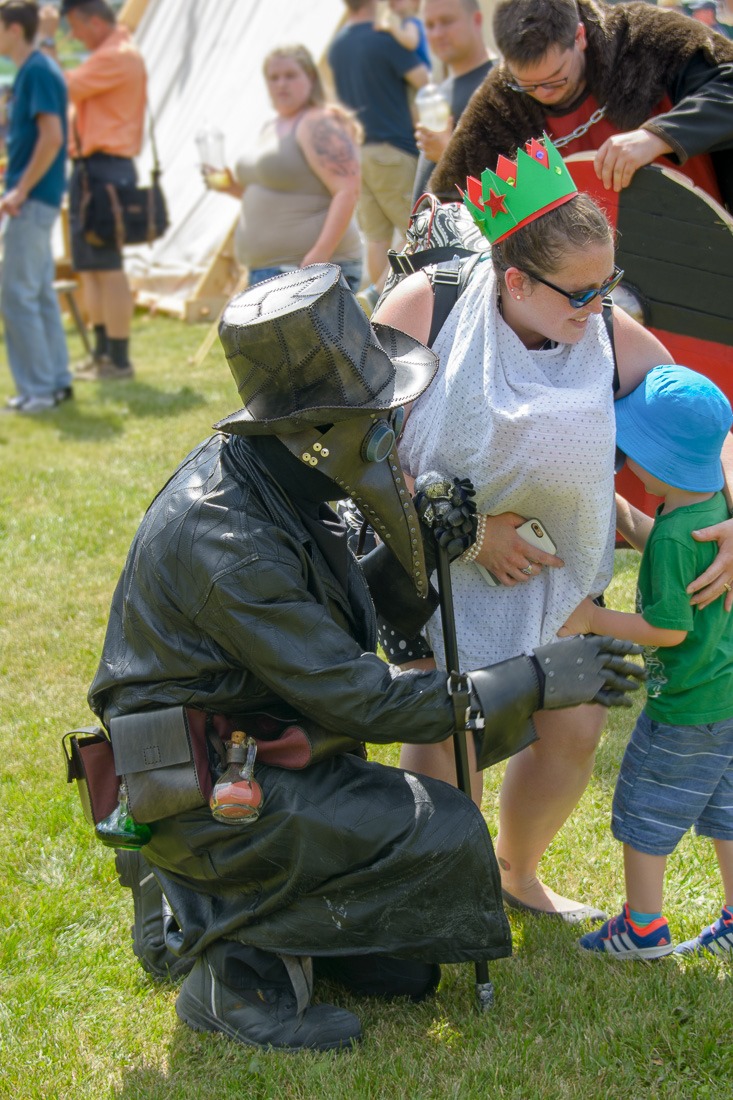 As for the doctors of that period, well, they were just as scary as the prospect of being sick till the end. This young boy here wants nothing to do with the doctor. His mask, however, was not supposed to scare anyone. During the period of the “Black Death” and later, the stench of the rotting people that were still alive was so strong that the beak of the mask was stuffed with fragrant flowers and derived perfumes as well as straw. More for the doctor’s comfort than for the patients’. The above fellow is quite well dressed for a “Plague Doctor”. The doctors religiously believed that the human body was made out of four humors that needed to stay in balance. Someone that was too aggressive and angry had to be bled to relieve him or her from the imbalance of too much red blood. 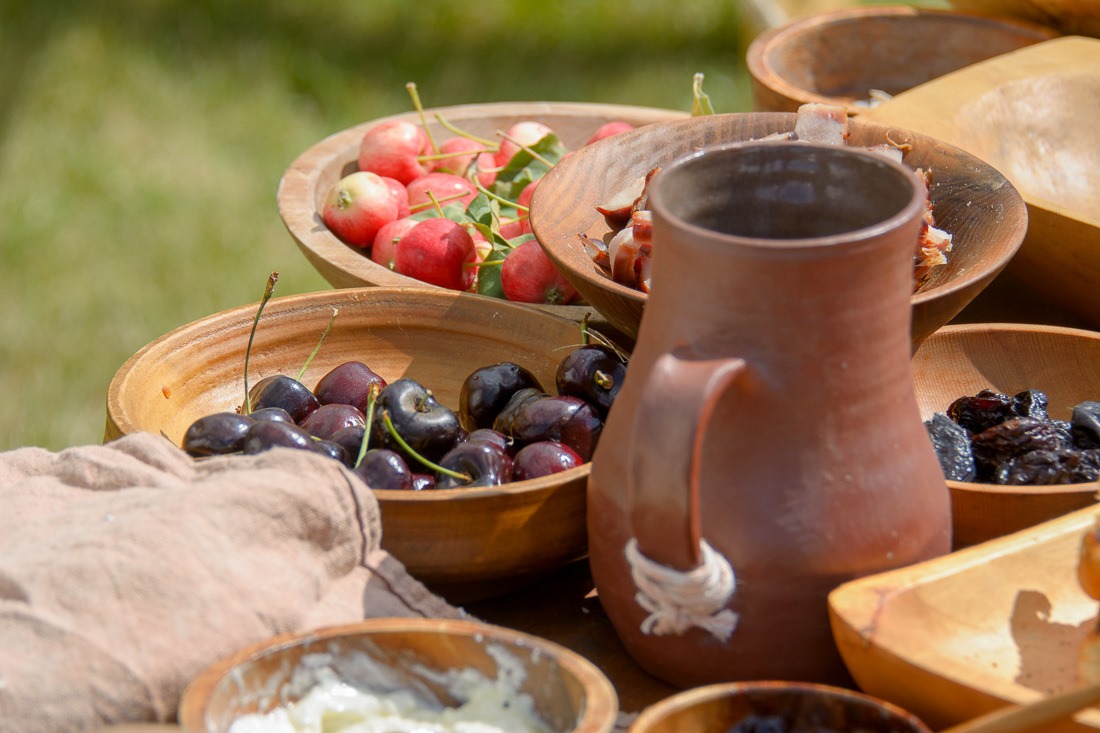 Humors could often be rebalanced by eating the right foods. Well, at least there is some truth to that, although the underlying principle is still wrong and outdated

. Eating fruit and vegetables was just as good for your health than going to a doctor who usually did nothing more than confirm the death of a loved one. After all, who was going to ask for a doctor for someone they didn’t care about? 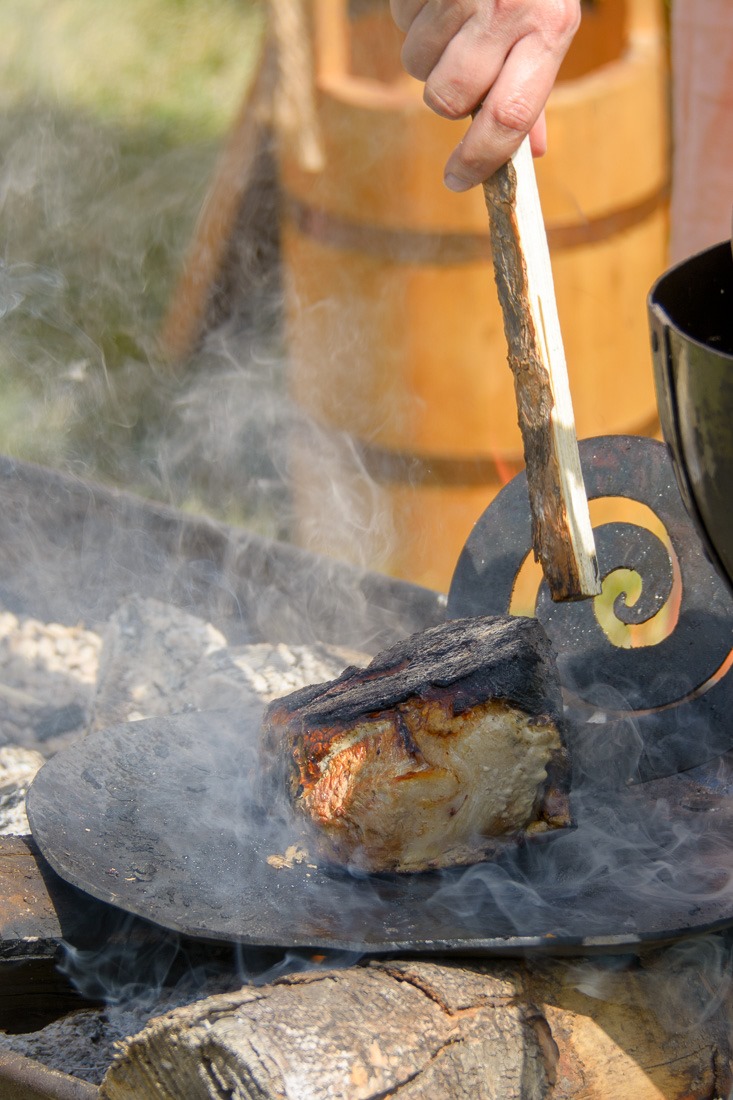 Good meat, just a bit overdone for my taste

Good food also comes with good meat. Preparation of the meat might leave a little to be desired, but after all we have barbecues today. Some people never clean them and continue to serve charred meat to friends and family… 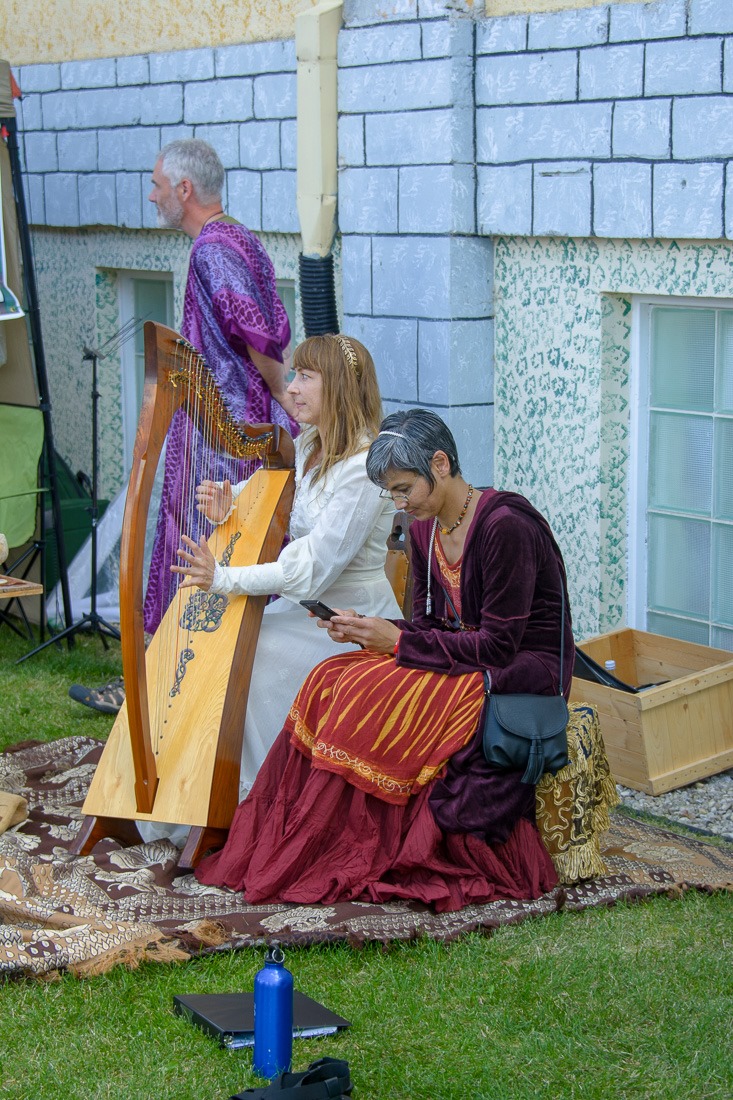 Another way to calm the humors in the body was with music. Although music was pretty expensive in those days. Recordings didn’t exist, even if I saw plenty of iPods and other devices at the festival. Music had to be created on the spot and consumed just as fast. Memories of music were all that remained, except perhaps for the lady with that iPhone 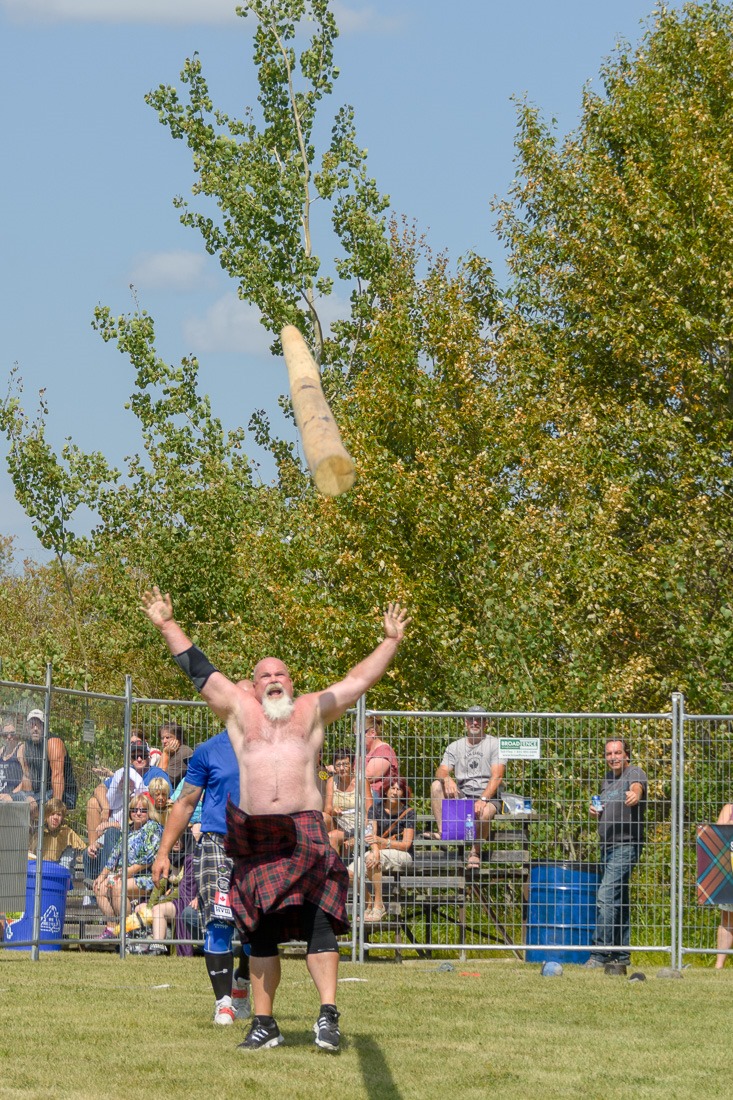 To stay in shape for a fight also meant sports. One of the more exacting sports is the Caber Toss, preferred by the Scottish. The Caber is a large tapered pole that needs to be thrown as far as possible and should topple over. If it simply falls in the grass, the toss is not good. The ideal toss is the one that topples over the caber in a straight, forward direction. Not easily done for sure. Legend has it that Scots wear nothing under their kilts, the guy above was either unaware of the legend or not really from Scotland 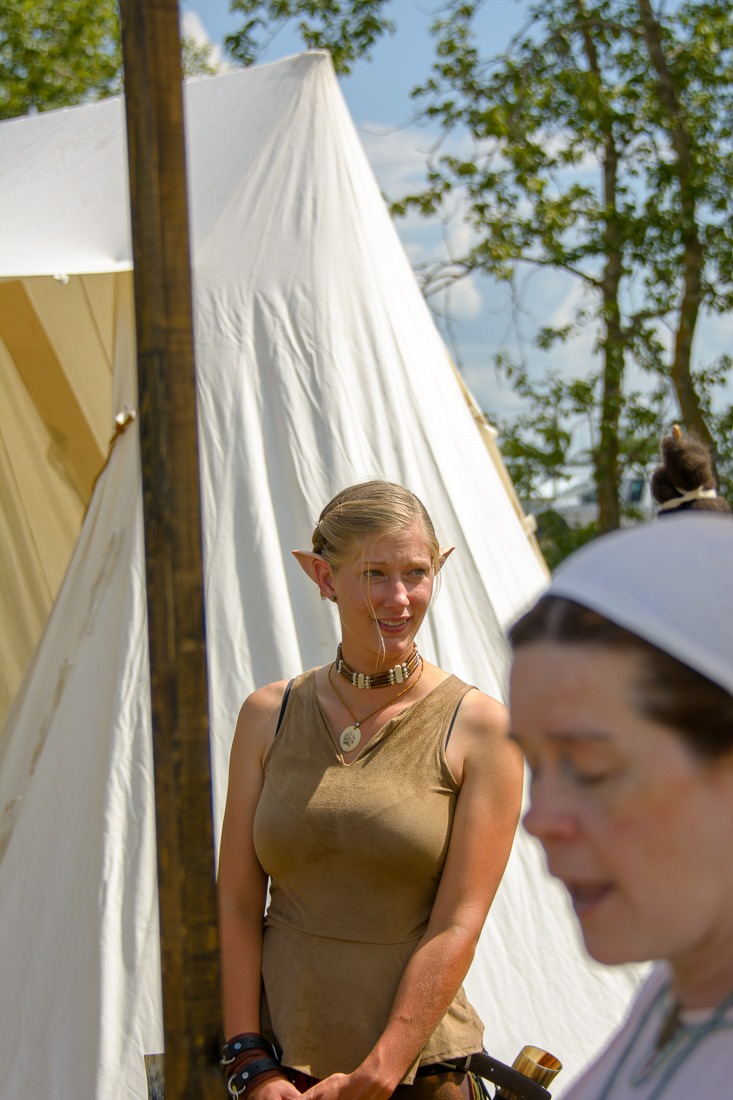 And then you have the anachronisms inside the anachronisms. Mr. Spock’s daughter was clearly not in the right spot during the Medieval Festival, although time travel is something from the future that can easily be done. I don’t know, but this struck me as a bit odd. 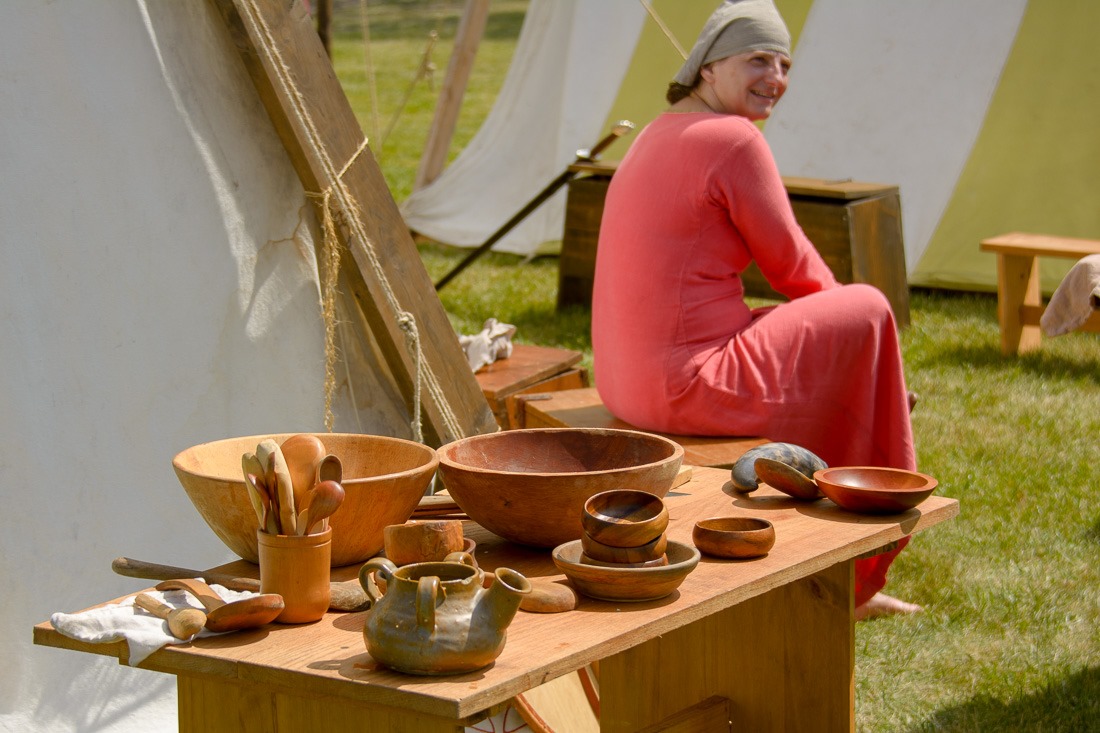 Well dressed for the occasion

Others… well some remained in character all the way. This was clearly the best dressed character for the festival, as the temps soared above the +30C mark. Actors in full armour and heavy woollen clothing were most definitely at a disadvantage.

Anachronisms, things that don’t belong in a certain time period. I guess that if this were all real, I would have been that anachronism, with my camera and all. A good thing I didn’t use a flash of some kind, they might have burnt me at the stakes for sorcery.