‘t was a few nights before Christmas on a dark and cold night. A half frozen photographer was cradling his beloved camera out in the cold. He was desperately looking for something to shoot, but the cold had frozen his eyelids. As well as his camera shutter and battery. The lonely man shivered, he hadn’t shot anything for weeks and now the year was coming to an end. Never in his picturesque existence would he have believed that the end of the year could be so dark. 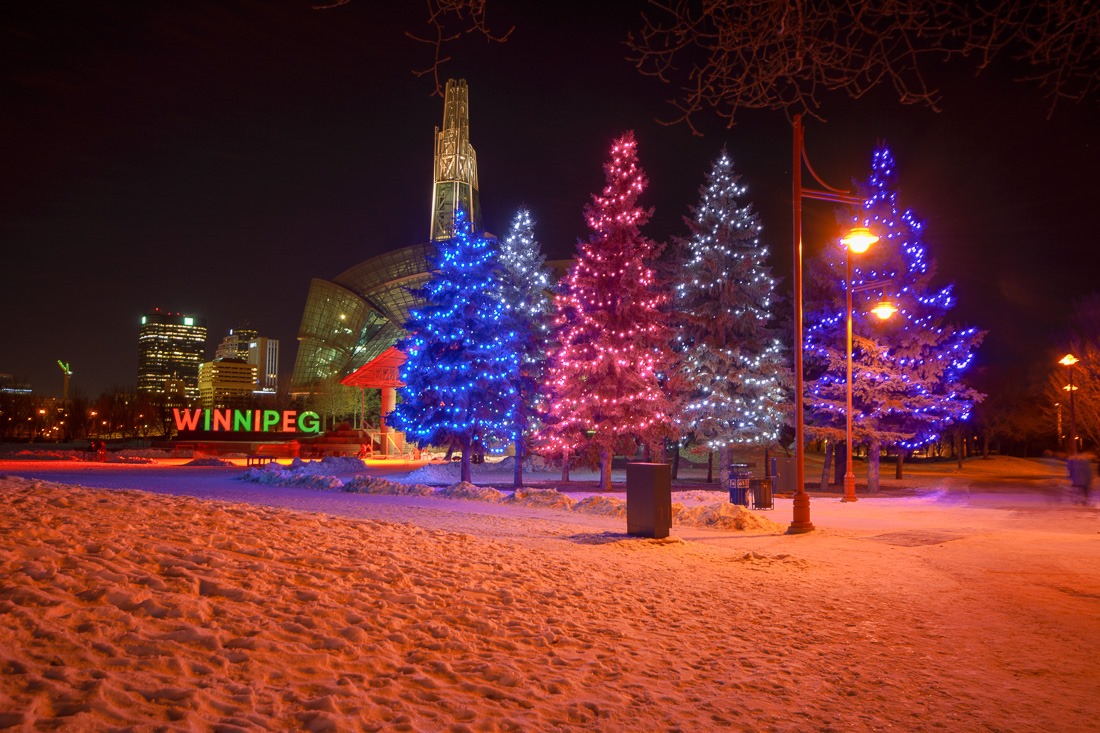 The squeaking snow under his feet suddenly lit up. He had arrived at The Forks in Winnipeg. As if by magic, someone had flicked the switch to light up all the trees and walkways around him. He was saved!

Of course you can imagine any photographer you know in this scenario, even if some of those photographers keep way more pictures than they should…

. Before I left the warmth of my home for The Forks, I knew more or less what to expect, although this year the City/The Forks have done a better job. Right on the parking lot, the lights are everywhere. That one was a given.

Interestingly, hardly anyone looks up into the trees when they get out of their cars. Everyone seems to be in a rush to get in and get out as quick as possible. Yet it can’t be for the short free parking period you get there. You don’t get any, so you might as well enjoy the time you stay there, right? 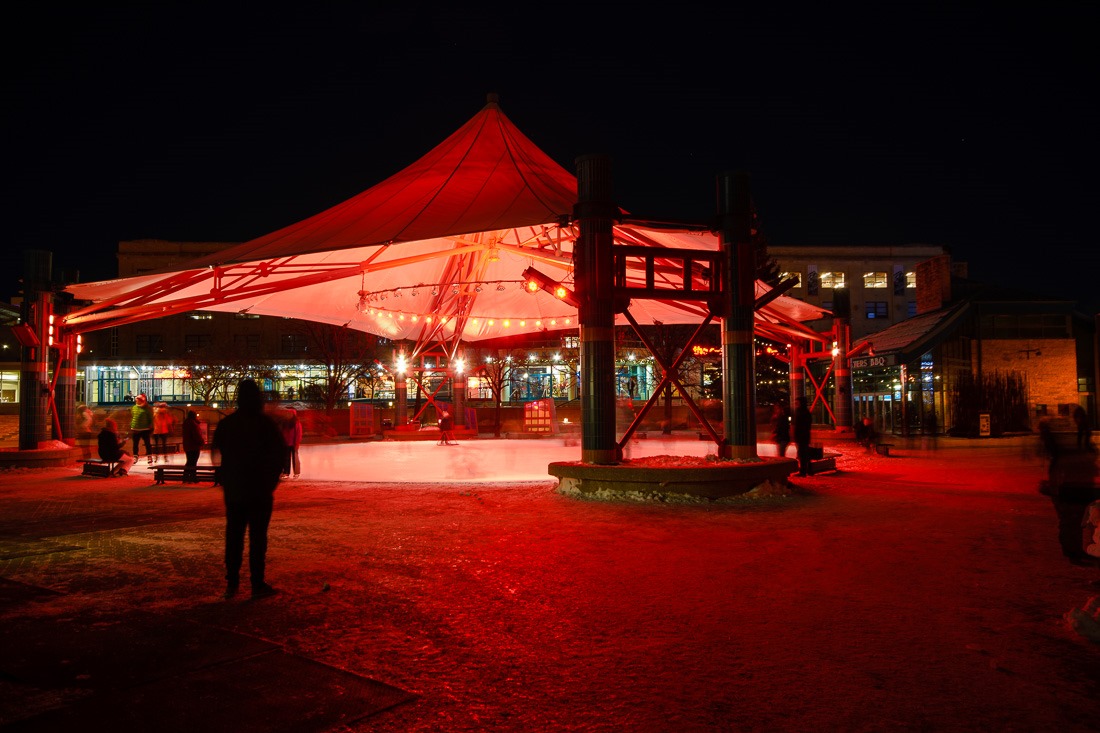 A very prominent place at The Forks is the skating rink. Brightly lit, kids enjoy themselves immensely in the fiery red light strung high above the ice. While taking a picture with a long shutter speed will turn most of the skaters into eerie ghosts, some seem to persist ad provide me with the human element in the picture. One kid seemed to be frozen in place near the far end of the rink. 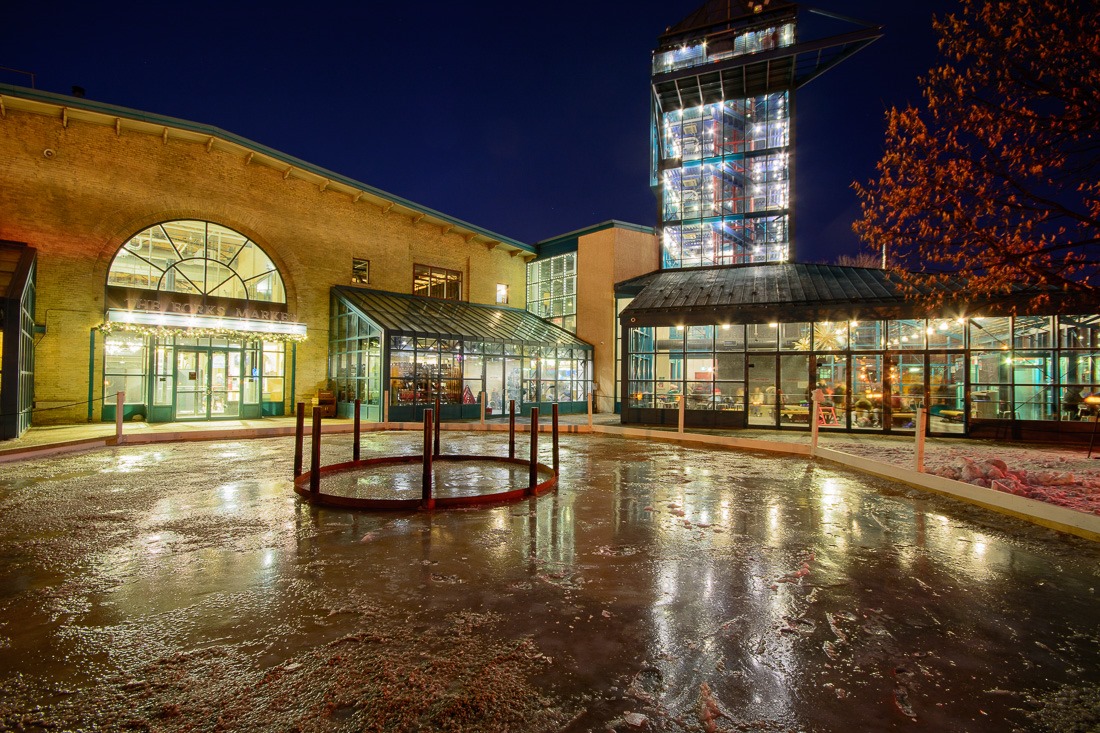 Other places were still in preparation for times to come, although I have no idea what is in store here. This ice was bumpy and uneven, typical of hastily frozen ice. That comes as no surprise with the warmer/cold weather we have had lately. I’m curious about what this will become. 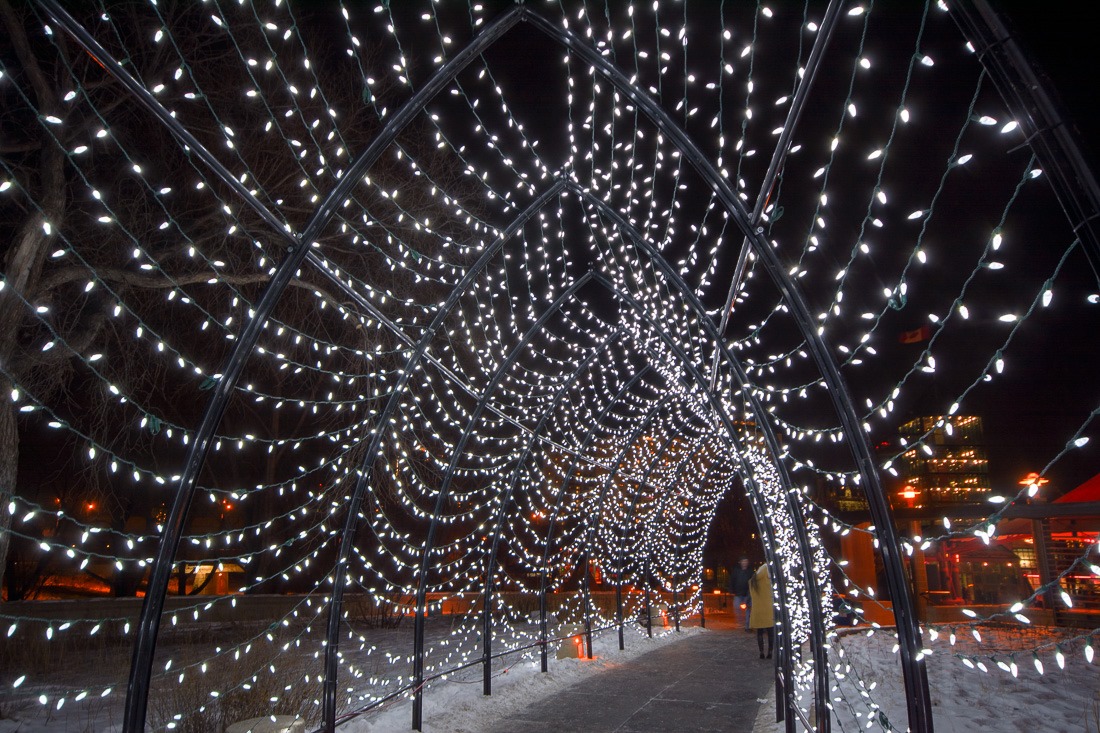 Walking down to the river, a tunnel of tiny lights is a favourite spot for all kinds of photos. I had to wait a long time before a young couple was done shooting themselves. With a camera, of course. Walking underneath this canopy of lights can make  you a little dizzy. As soon as you stop it will become stable again. I should have shot a video of this, but there were too many people around at all times to make it a dazzling light effect video. Oh well, perhaps I should come back after midnight… 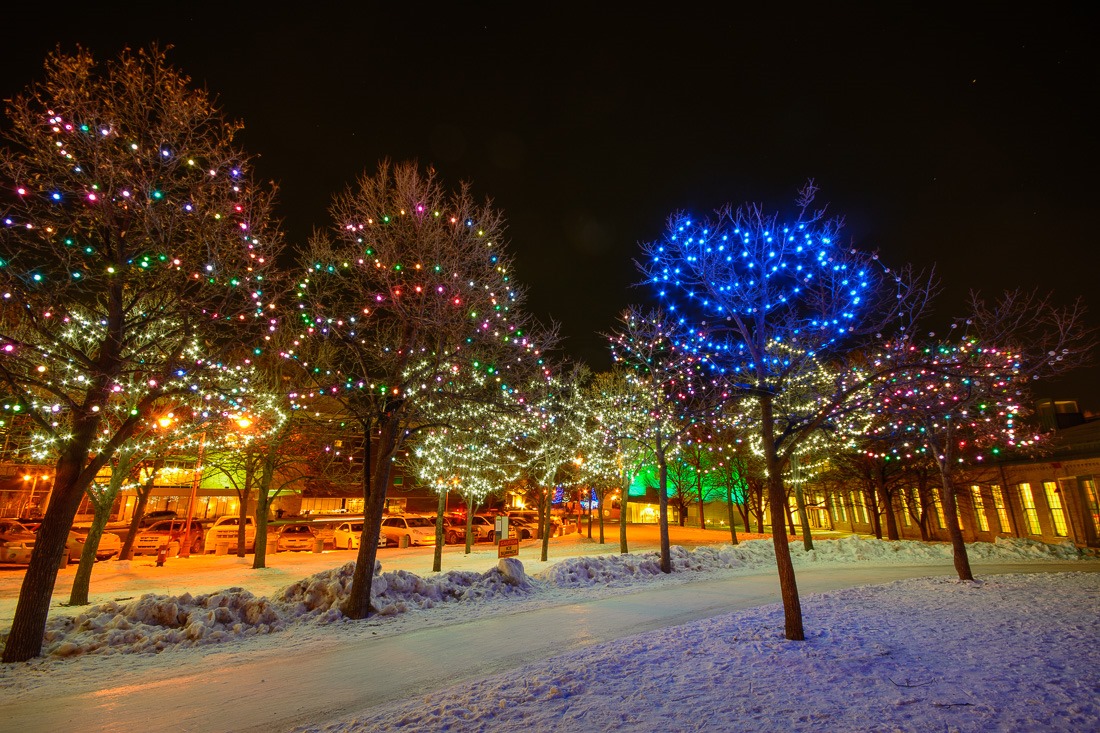 In front of the Children’s Museum

Continuing the walk towards the Children’s Museum, trees are decorated everywhere. Blinking and colour changing lights all over the place. In a way, it’s tricky to shoot them, a longer shutter speed tends to blend the different colours into one little blob for each lightbulb. 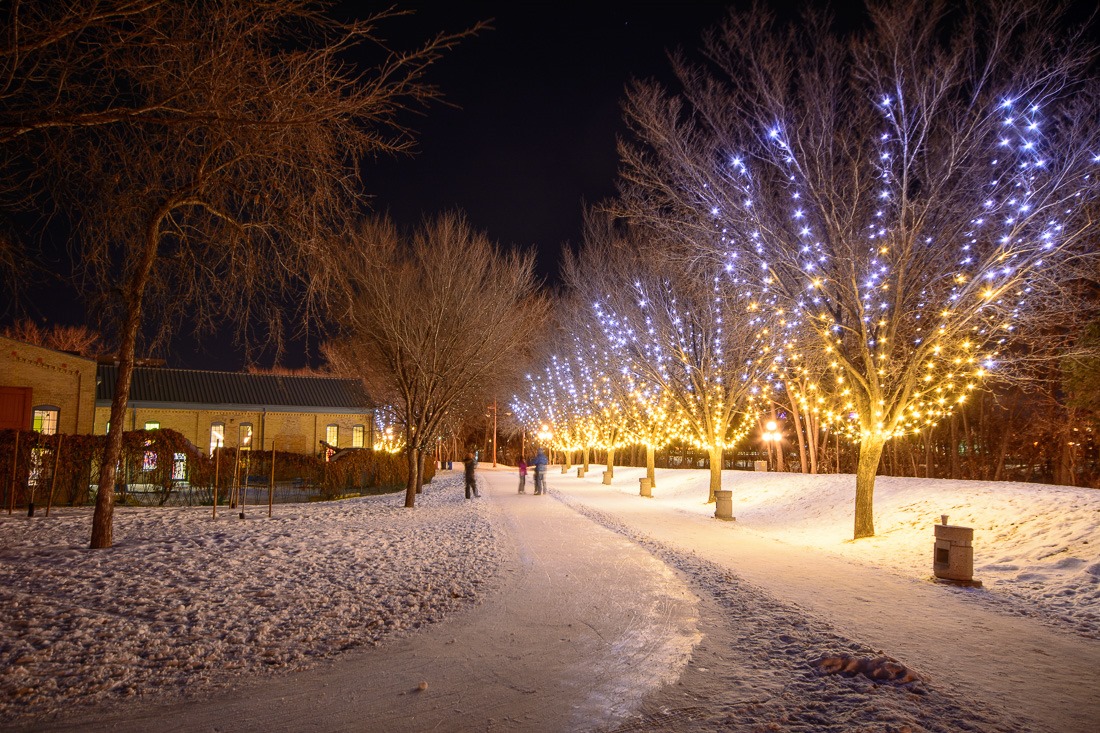 Old and new together

The other side of the museum, the river side, presents a more serene view. The bottom half of these trees are decorated with traditional lightbulbs, the top half with modern LED lights. I am more of a traditional guy and like those yellowish glowing lights more. Usually. The combination here make for a nice contrast and still presents a coherent lighting effect. 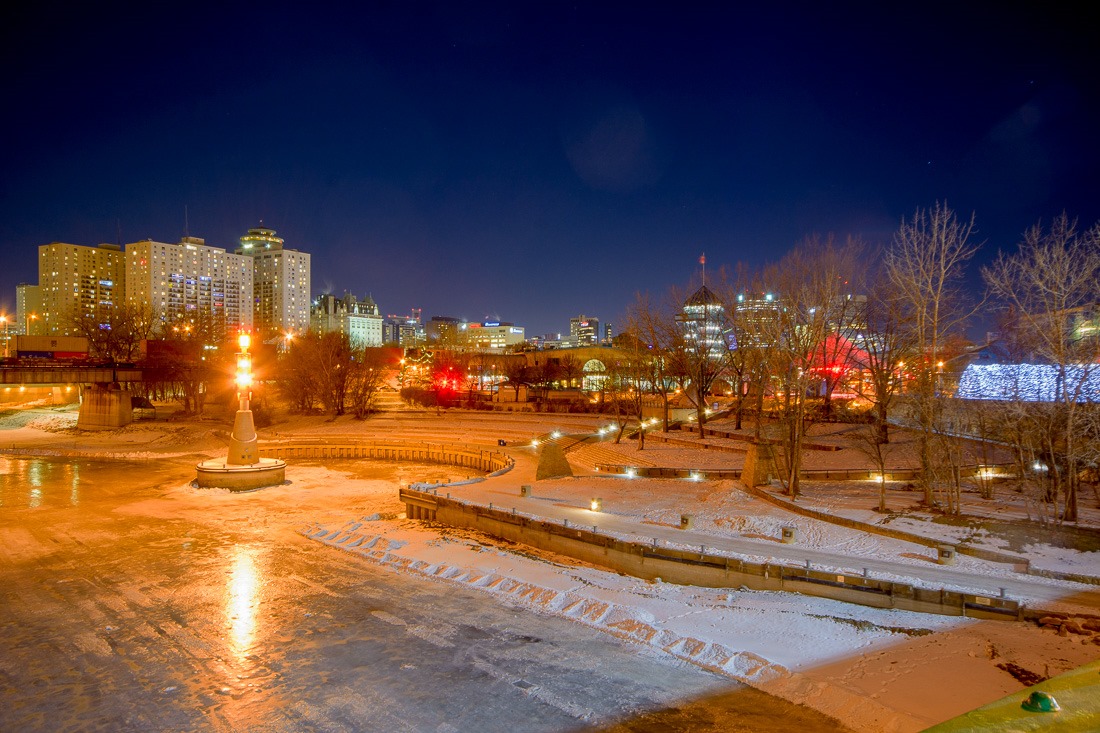 The Forks in full preparation

When you are at The Forks with a camera, one of the places that you cannot miss is the footbridge, formerly a train bridge. The lights over the bridge are great, but I have shot those already a few times. So I thought to shoot the Forks themselves. As you can see, there are lots of things in preparation, few of them have been finished. While the signs along the riverside say “Thin Ice, Keep Off!”, the tracks of bobcats show that the ice is pretty thick already. The biggest issue right now would be to get on and off the ice and stay in one piece. Of course, the bobcats are those tiny bulldozers, not the animals. we don’t get those in the city.

As you can see, the wary photographer, cold and hungry, finally got his fill as far as photography went. The stomach and the cold were another chapter to handle for him. I hope it went well.