Summer’s drawing to an end. A few more weeks and we’ll have forgotten the beautiful days and the sweltering heat. Gone will be the evenings of preparing food on a barbecue and eating outside. We will be welcoming fresher evenings, less mosquitoes and other flying crocodiles. All we will have left are the memories we recorded in our brains and on our memory cards. 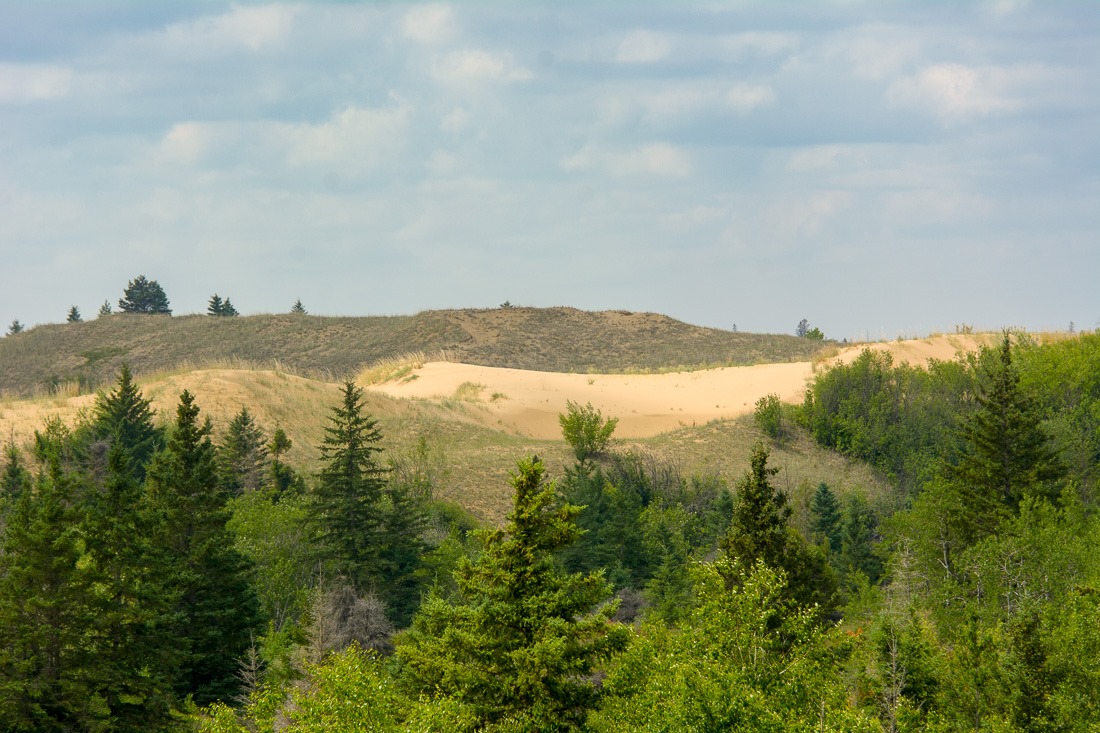 For now, both are working fine, but I’m hedging my bets by doubling up my memories on an SD card

So what did we do in this short summer? I could say “Lots of things” others might say “Way too little, this summer was too short!”. Everybody will be right, we wanted to do so much more in too short a time. However, summertime is not only for fun and games, some work also needs to be done. Yard work, house maintenance, renovations, and so much more. All these activities are not recorded on camera, but rather recorded as results of hard work. Results we will be cherishing for a long time to come. 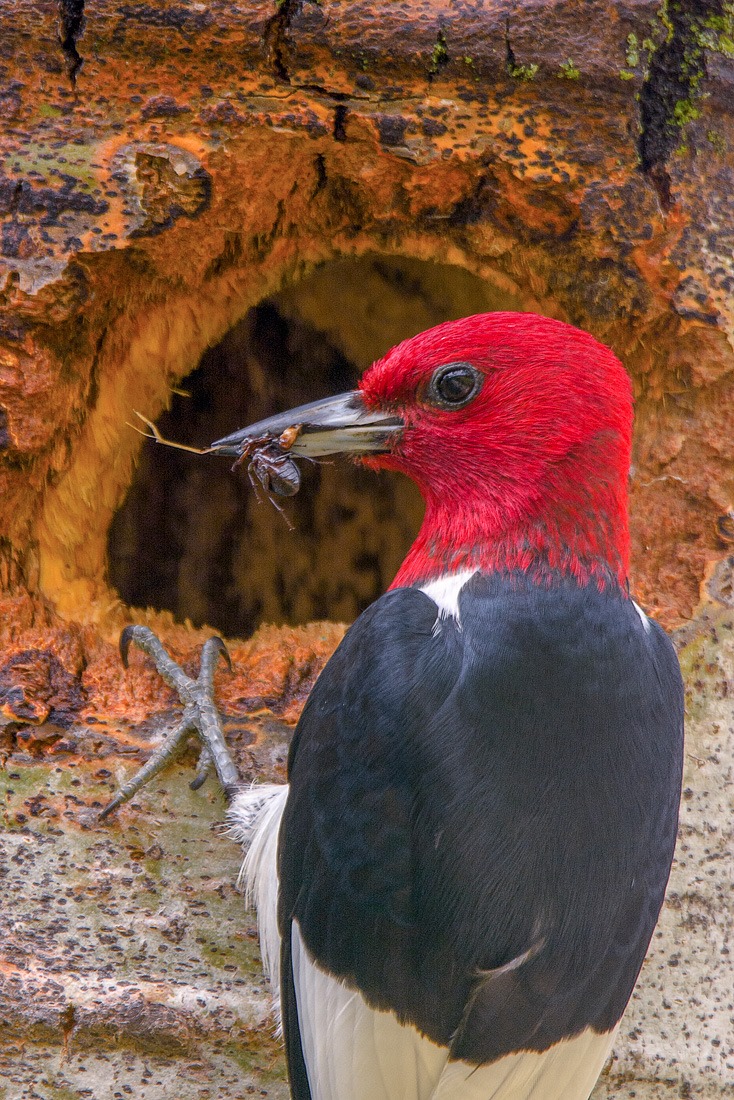 Others will have started by feeding the hungry young in the nest. This Red-headed Woodpecker had a lot of work to keep the young satisfied. This pair of woodpeckers seems to come back every year to the same tree, all to our pleasure of photographing them. When they first arrive and the eggs haven’t hatched yet, both parents look fresh and somewhat rested. Once the eggs have made place for young birds, their appearance becomes somewhat more “haggard” and tired looking. Respect your parents, they have done all the hard work while you were doing nothing but grow… 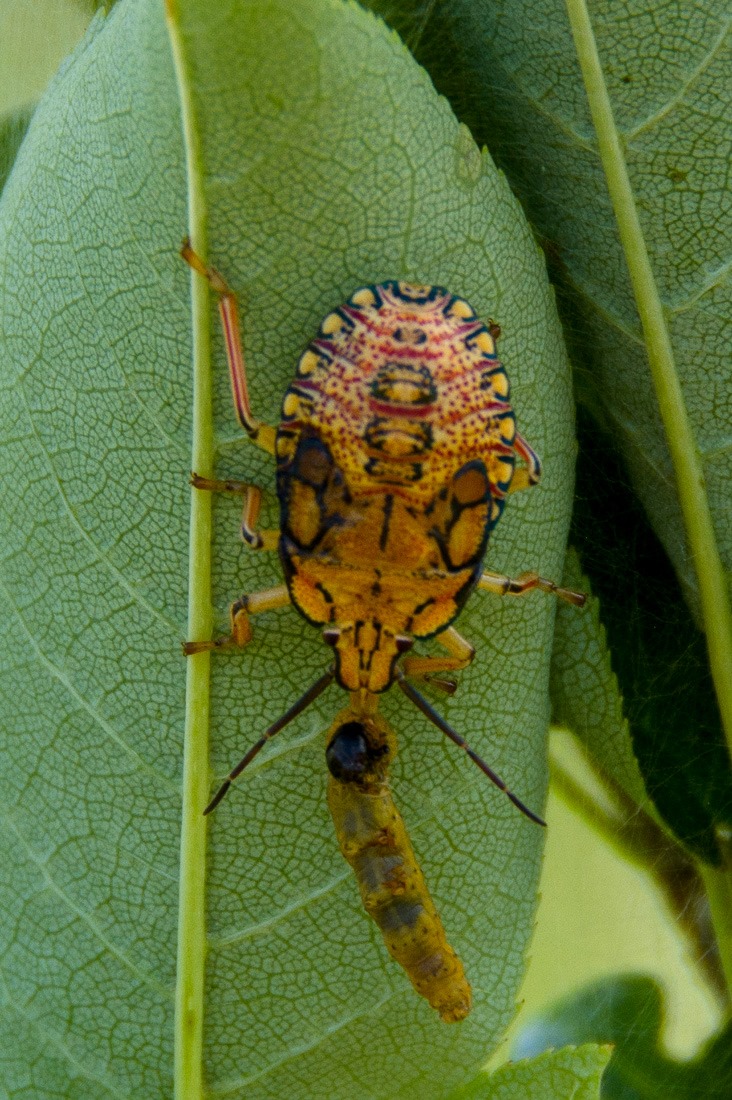 The above picture and the leading pic of this post both were from Sprucewoods Provincial Park. Although this Stink Bug is not very appreciated by people when they disturb it (it stinks, can you imagine?) this one seems to be a nymph of a rarer, less found kind. Good thing I had my sharp eyes with me, unlike many days where a thick fog seems to cloud my vision nowadays. Mostly in the mornings… 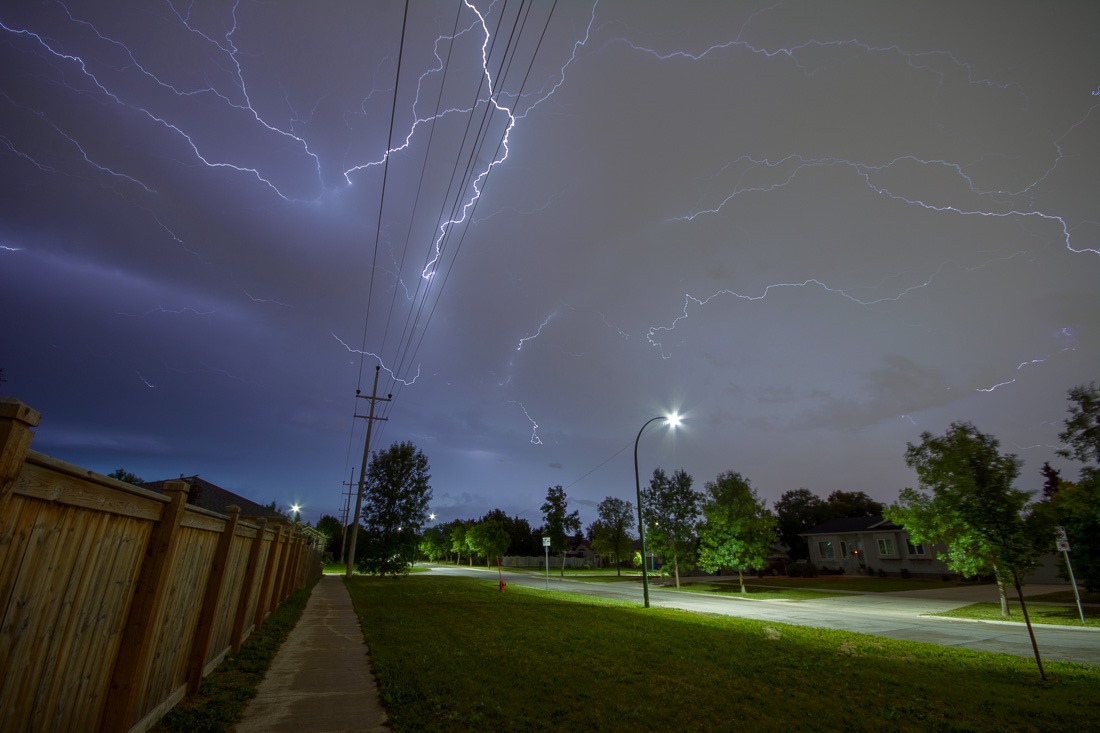 Nocturnal rage in the city

That fog usually shows up after a night of being out and about. Nights filled with electrical magic. The above shot was a single shot of 90 seconds. The night of June 29, 2018 was a rough one. The storm was dry and went on for hours. When the clouds finally broke and released the rain, it was high time to go back in the house and try to get some (well deserved) sleep.

Not only the nights can give me storm pictures. Daytime storms can be just as impressive. More so when you can see the complete magnitude of the storm system, not only the electrical part. We were pursued by this storm going to Hecla Island. While it looked very impressive, it finally turned out to be a blown-up clown, nothing came from it, just a few drops of rain. 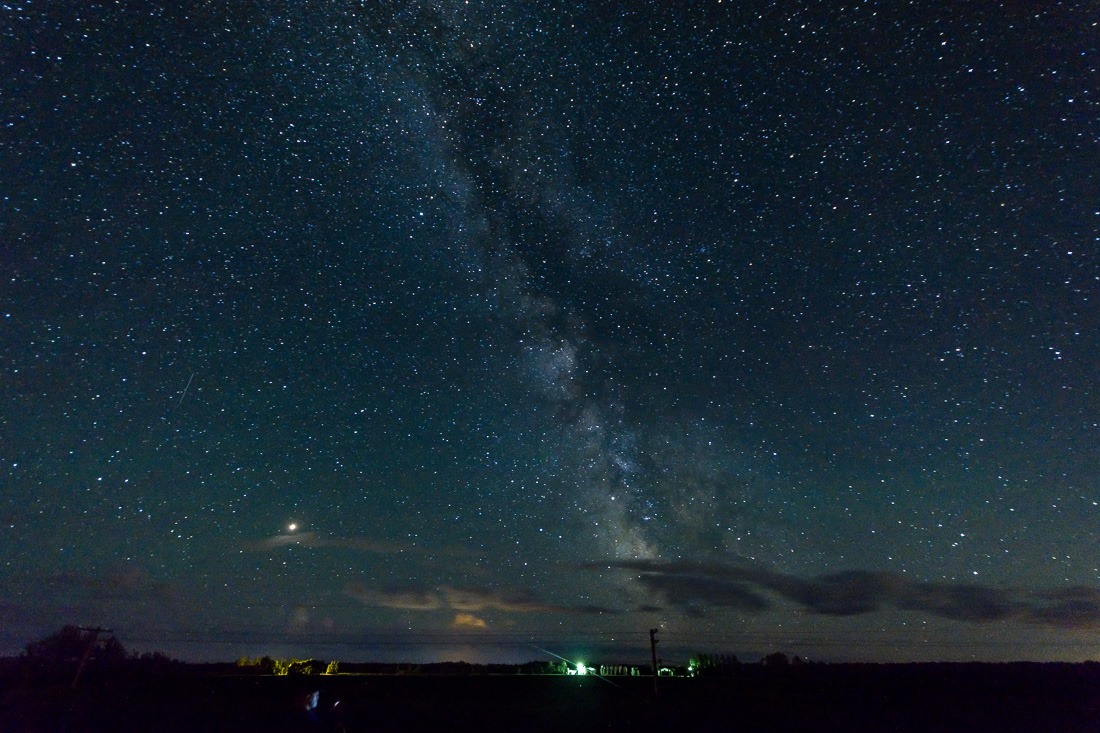 And those few drops were the last of any rain we would see for a number of weeks here in Manitoba. Storms were observed only from far away, the above thunderstorm is way into Minnesota was seen during a night shooting event with a friend. After we had been driven out of the Whiteshell Provincial Park by millions of hungry and angry mosquitoes, we ended up on a road in the middle of nowhere. Well, Highway 15 is not really a small road, but traffic around 1am is minimal. No mosquitoes to be seen here, so we shot the Milky Way to our hearts’ content. Nights like these tend to explain the foggy mornings… 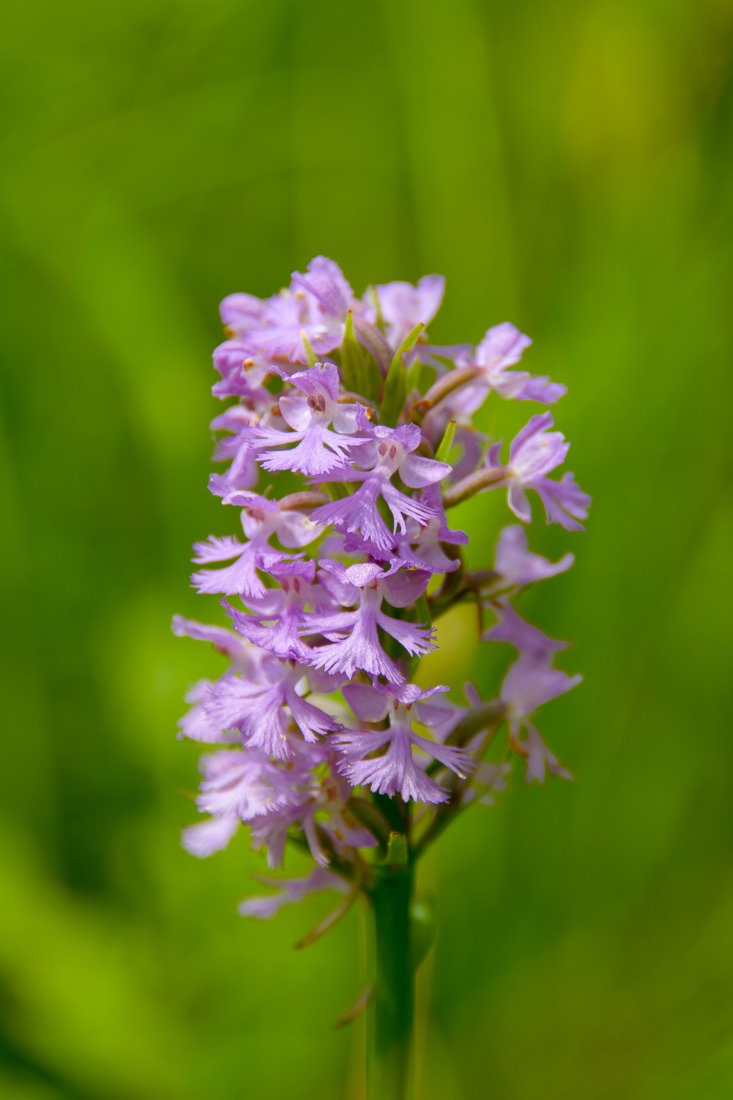 A few days later, we went in search of the Small Purple Fringed Orchid. A fairly rare flower in our area, so it was a must-see in my book. After a few hours driving, the flowers were there, simply on the side of the road. If I hadn’t wanted some nice shots, I could have shot them from behind the wheel of my car. But by now you may have noticed that I like to go the extra mile, or in this case a few feet, to get better shots. 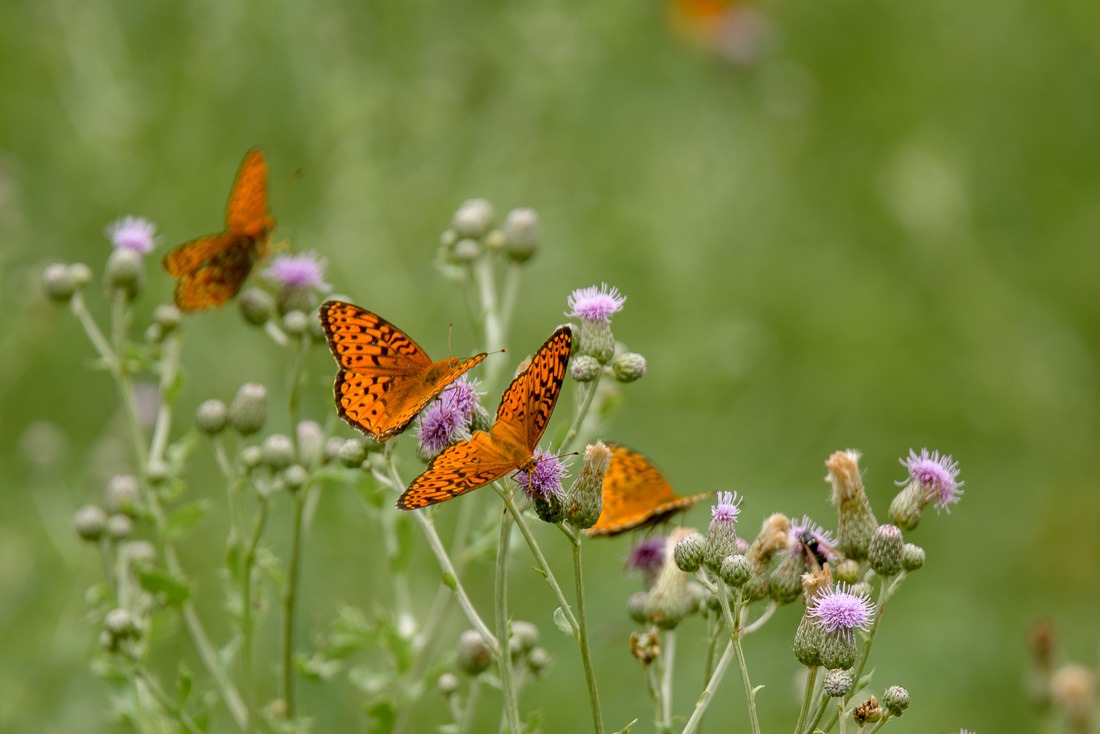 Once we had enough shots of the Small Purple Fringed Orchid, we decided to move. You can only shoot a plant or flower so many times before one can see “some” repetition, right? While most of us were trying to shoot the wonderful Water Lilies on one side of the road, I noticed something odd on the other side. Patches of orange were moving more than a normal flower would do. As it turned out, the field was literally full of Great Spangled Fritillary butterflies. This shot was taken some 10 meters away, a ditch prevented me from going closer. 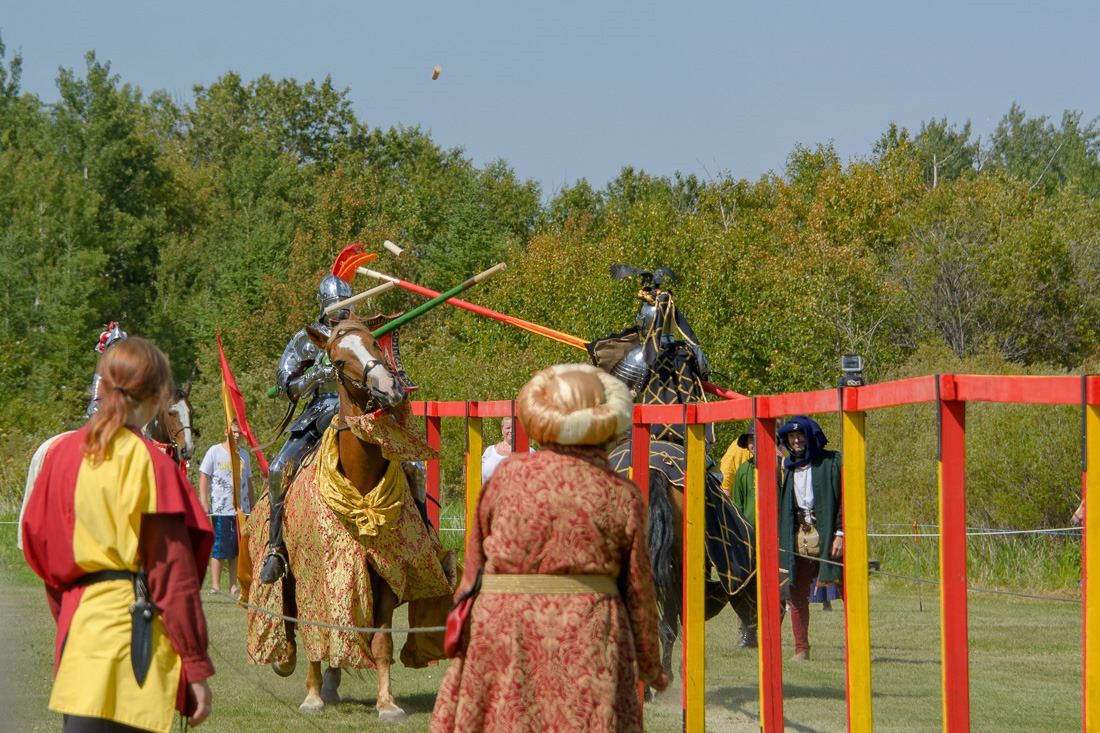 Jousting at the Medieval Festival

By the end of July, the Cooks Creek Medieval Festival was about to start. This bi-annual event is something one shouldn’t miss. Held every two years to keep interest at a higher level, the festival allows for anyone to show up in epoch “certified” clothing and thus participate in the illusion that we still live in the Middle ages. A time where knights and peasants were usually at odds with each other, kings were playing games and doctors wore weird, bird like masks to conceal the flowers of which they inhaled the fragrance, rather than the stench of the sick they were trying to heal. Jousting today is done with breakable lances, unlike the lance that initiated the demise of King Henry II of France on July 10, 1559 in Paris. No deaths were to be deplored at the Medieval Festival of 2018 in Cooks Creek. 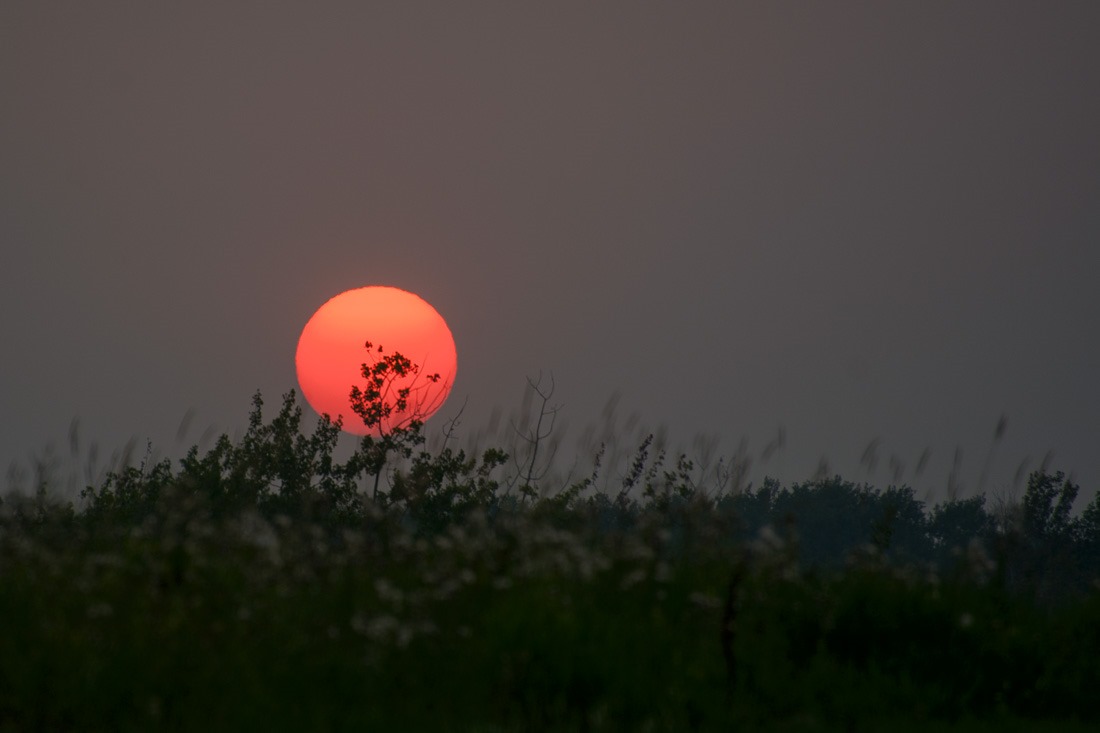 Death, however was on the menu for much of Canada’s western provinces during that time, though. Forest fires were raging (some of them still are today) and the smoke of those fires reached the sweet province of Manitoba in the air. Some days, the smell of smoke was pretty noticeable, other days, only the sun was dazed by the smoke. The setting sun in Birds Hill Park should still have been white at that time of the day. Instead it was fairly safe to shoot it with the naked eye, without protection. 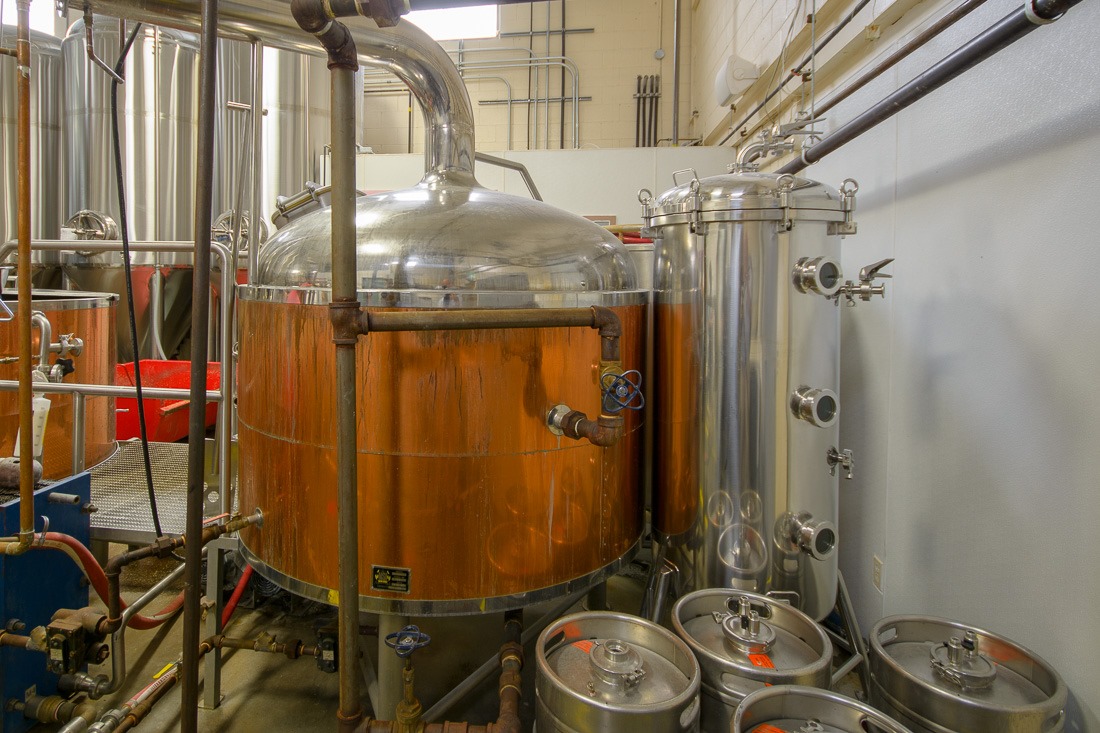 Then it was time to get some refreshments at Half Pints Brewing Company. Every week they allow for visitors to come in and enjoy both beer and the sights of the brewery itself. While only a small, local brewery, they have an astonishing array of beers. Many of them are seasonal, some of them can be tasted on the premises. 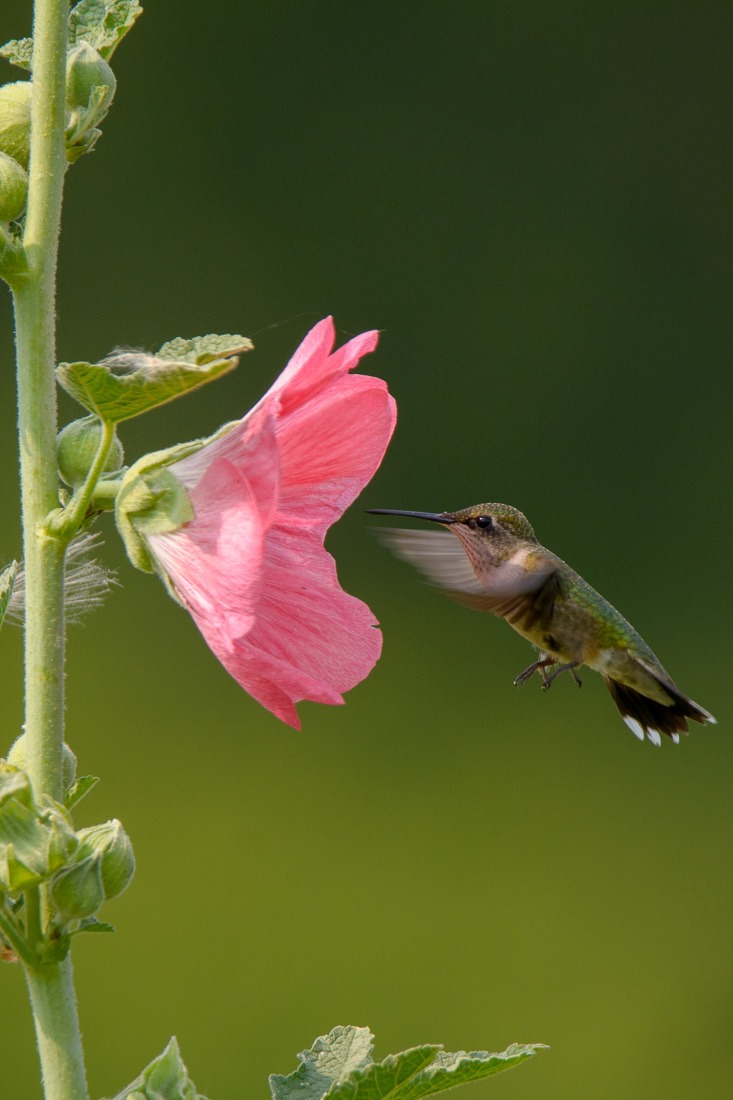 But we were not the only thirsty ones. Hummingbirds were actively feeding on all kinds of nectar providing flowers. This young male Ruby Throated Hummingbird was actively chasing other hummingbirds and bees or wasps away from his “stash” of nectar. We enjoyed several aerial fights and skirmishes, but without a chance to shoot them. There are limits to our mobility, compared to hummingbirds in flight. 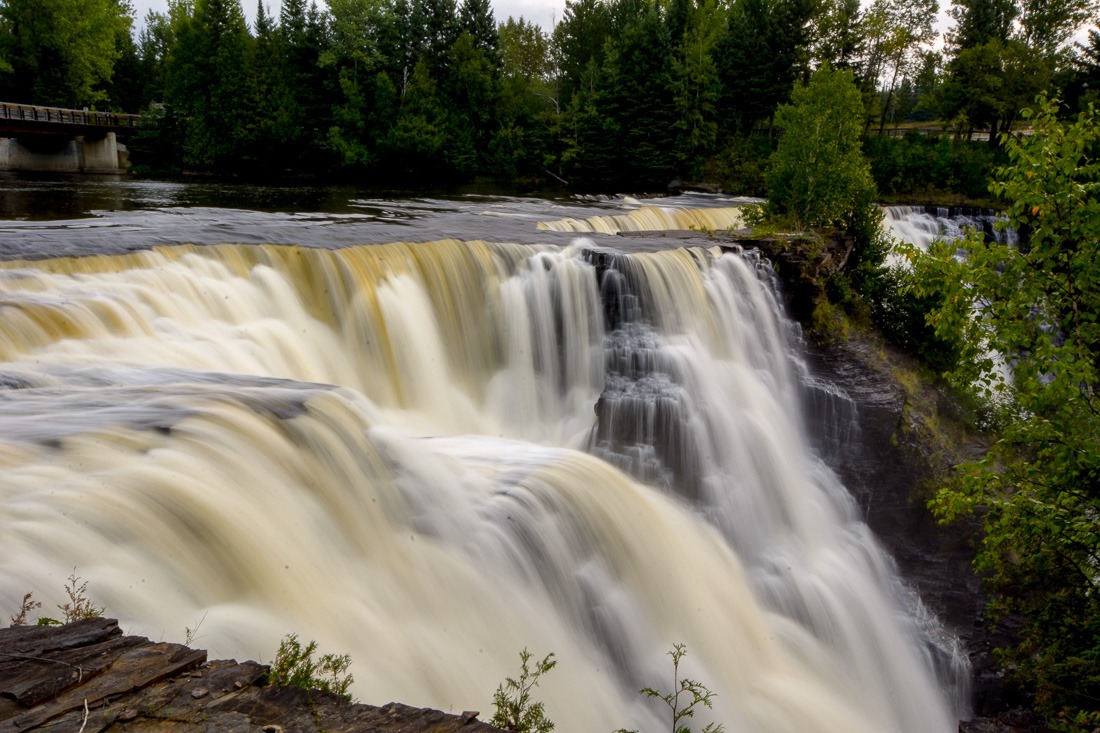 Then it was time for some vacation a little further away. After weeks of heat and drought, we thought that we could have a vacation and enjoy the heat somewhere else. Our first goal was Kakabeka Falls, near Thunderbay in Ontario. When we arrived in the evening clouds were gathering overhead. The night was filled with rain. The next night was filled with rain and thunderstorm. There was enough rain for me to avoid risking my camera gear in order to get some lightning shots. All is now stored away in real memory, not memory cards. 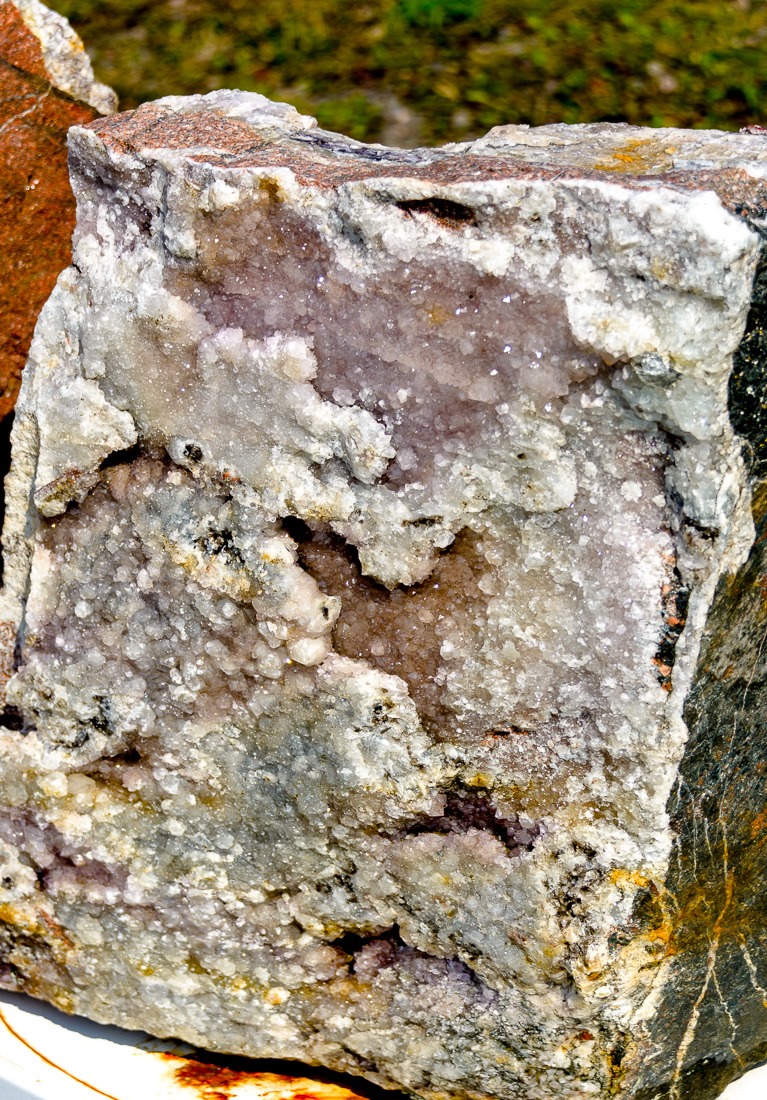 Amethyst by the tonne

Amethyst is a form of quartz that has been “heat treated” by Mother Nature. After treatment, it usually has a purple tinge to it. The darker the tinge, the rarer and more expensive the amethyst will be. The Amethyst Mine near Thunderbay is the biggest in North America. According to the guide we had, there is more than enough quality amethyst here to keep the mine running for another 150 years. The fun part of the visit was the fact that you can “mine” your own amethyst on the grounds. Finder’s Keeper’s is the motto, albeit for a small fee of a few dollars per pound of mined minerals. 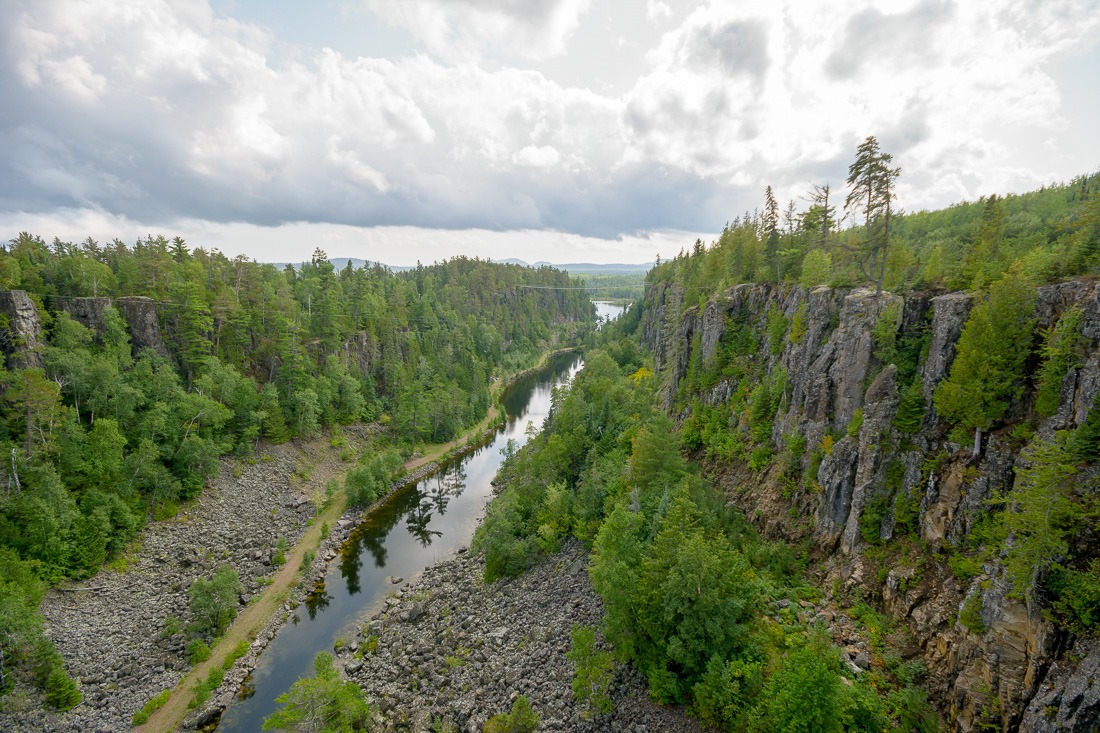 By now, the weather had cleared up and we headed towards the Ouimet Canyon. They have a zipline there (vaguely visible on the left along the rocky edge) but I am no fan of being moved along on a cable without any sense of control. Even worse, they didn’t allow for me to keep my camera with me to record the adventure. Instead we walked on the edges, bridges and along the canyon floor. All in the sweltering temperature we wanted for our vacation. That evening we put up our tent on a camp ground a little down the road. All to be met with another night of rain, storm and lightning.

We decided that it was time to leave the weather gods their fun and head home for a warm and dry place to sleep.

Summer is always too short, never enough time to do anything and when the cooler temps roll along, we always have the impression that we did “nothing”. Photograph your activities over the summer period and you will see that summer is not an illusion, it really exists, but we merely try to hide it as a result of our fear for the coming winter. Or perhaps we simply like to complain all the time…