Last weekend I went out, again. The weekend is the only time for me to get out and do something else than work. I guess that’s the case for many people, so I won’t complain about that. The decision was to visit some friends on Matheson Island. The same that will bring you up to Black Bear Island not far from there. 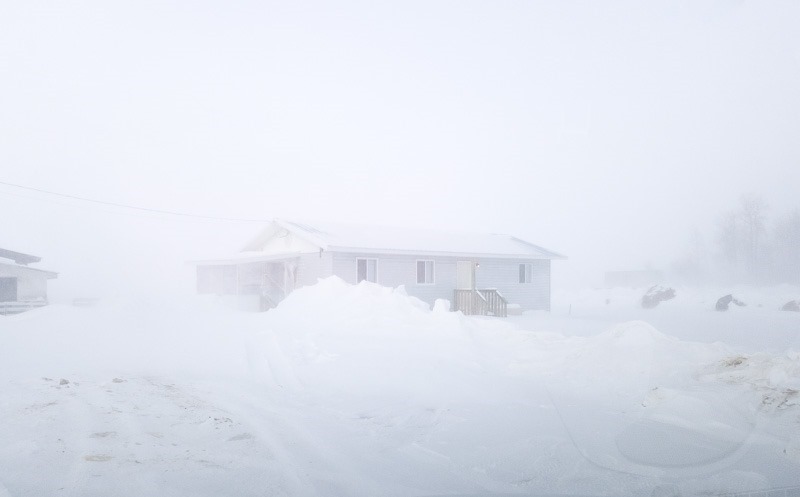 Of course, in this time of the year, there is no way to go to Black Bear Island. So a friend and I took the car and rolled. And rolled. Matheson Island is roughly 250 km north of Winnipeg and doesn’t see many tourists or visitors.

In my opinion, that is a shame, you can see the beauty of these islands in several of my previous posts. I know I promised not to write about the temperatures, but when I left Winnipeg, the temps were at a balmy –14C. Going north, a mere 250km made a difference of 11 degrees. –25C and hard wind. Arrived at the ice crossing to Matheson Island, I decided to take some pictures. 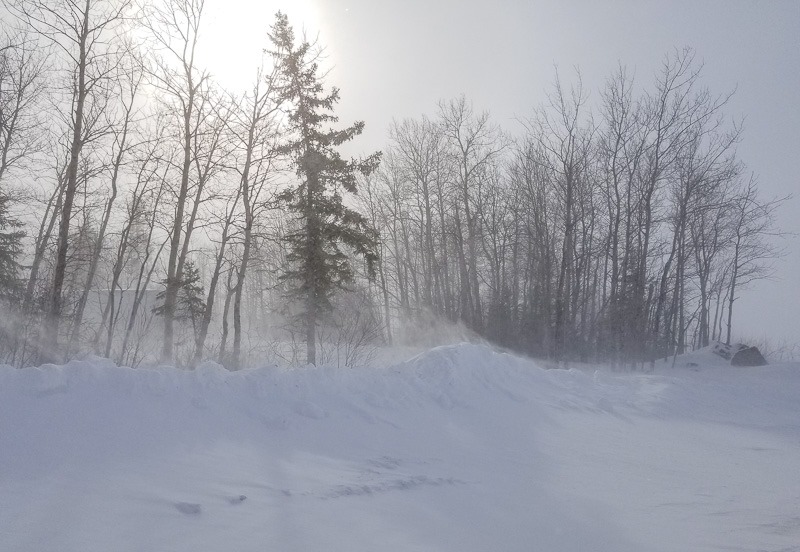 Change my lens into something more suitable and voila, better pictures.

The nagging feeling I had had all the way became the icy truth. I had forgotten my camera. Drive 250km to a place with nothing in sight and forget your camera. My grey hairs had done their job and succeeded in tricking me to forget about the most important piece of equipment required for the day. 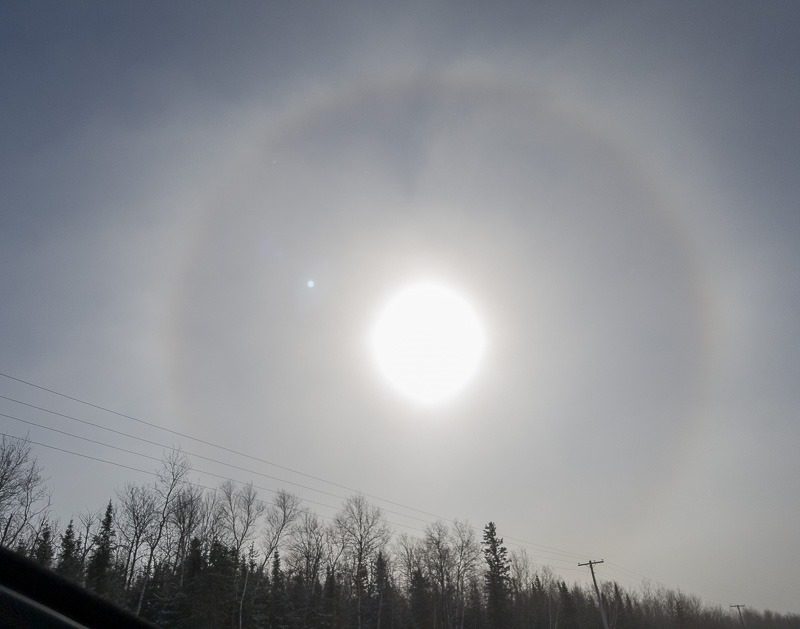 Halo around the sun

Now, there are different ways of reacting to that and I wasn’t going to melt all the snow around me in anger. Instead I decided that it was time to use my cellphone and see what I could come up with. No cellphone would have made me a bit more upset, but at least I hadn’t left that one at home. 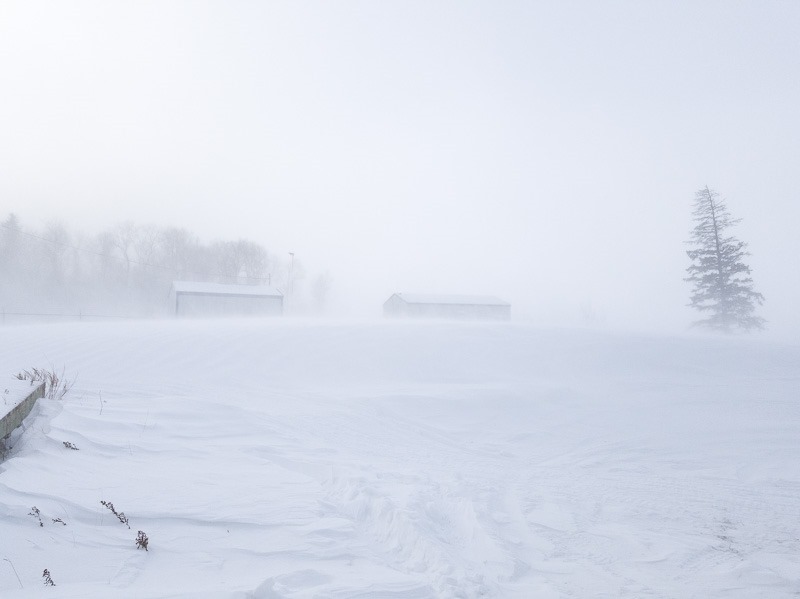 The lead picture of this post seems kind of bleak. The wind was blowing very hard and the snow came off the lake, Not fresh, soft snowflakes, no, this was snow that would cut off your head if you were not prepared. It is easy to think that as a master manipulator I could alter these pictures to look very cold. 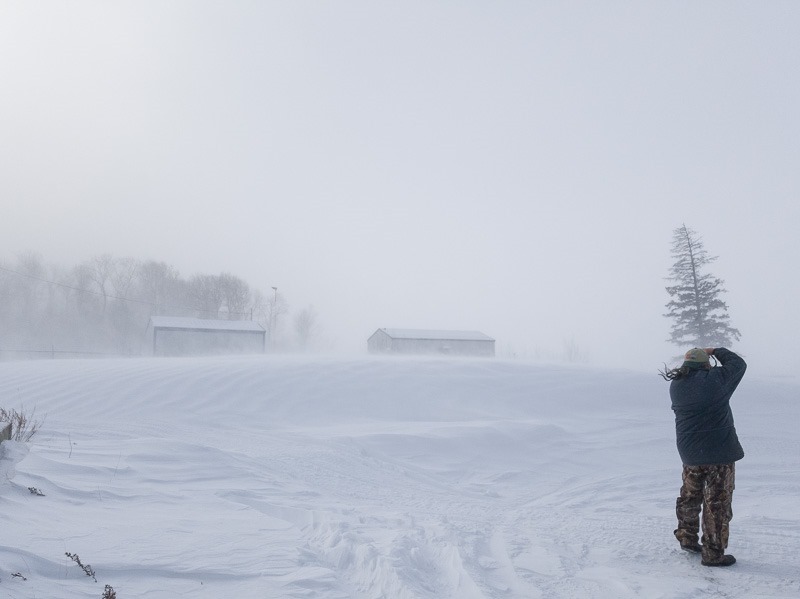 Near whiteout but with some contrast

So for a reference, I shot my friend in the back and present you with the result. The cold was unbelievable, –25C with winds of easily 70km/h. Leaving us with a wind chill of around –45. Enough to freeze exposed skin in a few minutes.

A few minutes was all that I wanted to take outside. No use in freezing useful body parts. When I looked towards the lake to see the ice road, all I could see was pure white. This was a complete whiteout! No use taking a picture of that, nothing would have shown. Instead the above video should give you an idea of what the situation looked like. 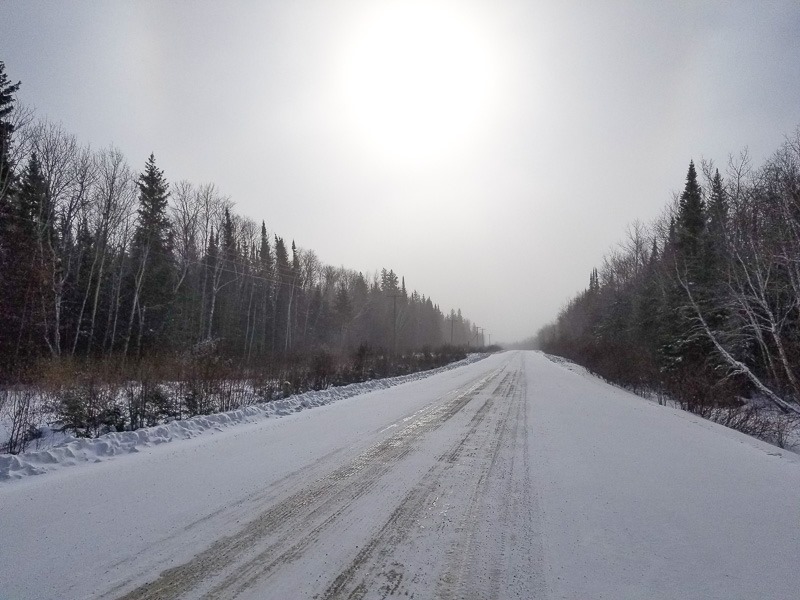 We decided not to  risk the trip over the ice, For all I knew we’d be able to end up at the northern tip of Lake Winnipeg without ever seeing anyone else. No, thanks for that. So we turned around and headed home. This time with the wind in the back, the car felt slightly better and the road, well it was still as tricky and cold. 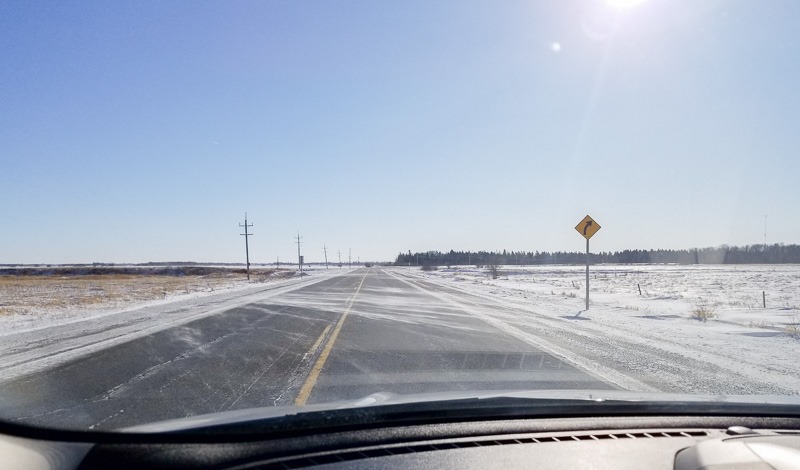 Even Highway #8 going south was at times invisible to any driver. Following that blowing snow with your eyes is kind of “dangerous”. Dangerous in the sense that you will fall asleep one moment or another.

Two people in the car did make for a better trip, no risk of falling asleep. Once back in Winnipeg, the temps were back at –14C and hardly any wind. Well, that teaches me to go up north and forget my gear, all I can get are cellphone pics and videos. Enjoy them and…