By now you have noticed that skies in Manitoba can get pretty wild. This time I will throw in the funky-coloured skies as well. From green to bright orange to ominous blue and back to normal. Whatever you can call normal in Manitoba. In many places the saying goes like “You don’t like the weather in […] ? Wait five minutes!” This is particularly true for Manitoba in Summer. 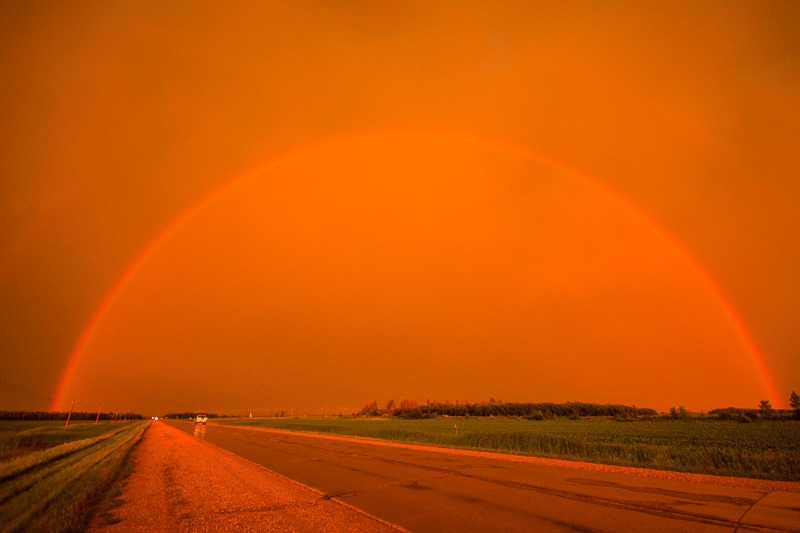 Even if for some pictures I have waited considerably longer than five minutes.

Summer storms are beautiful in Manitoba, until you find yourself underneath them. Left is left and right is right, and may you never confuse them when trying to outrun a storm. Outrunning a storm seems to be a bad idea to begin with, though. I have tried and lost. Only to have the car washed and dried in thirty minutes. The underside was not too well done, but any dirt on the top was gone. The wind after the rain dried everything. 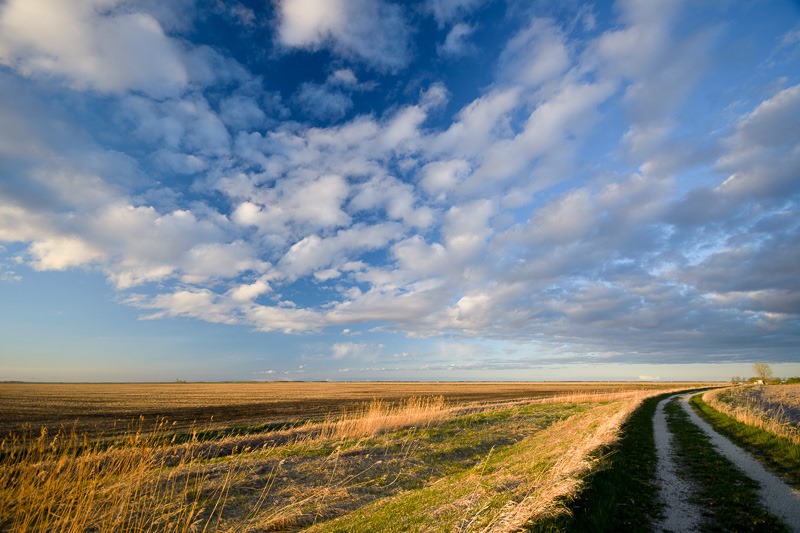 Quieter evenings will give you nice skies, without any threat of ripping your home from its foundations. Sometimes, just sometimes… the forecast tells that inside the big clouds that don’t look so big anyway, there is the chance of a tornado. Tornadoes are not very common in Manitoba, but they seems to appear more and more. But before I start about “Climate change”, let’s also take into account that nowadays with the internet and cellphone cameras, the chance of spotting and instantly reporting a tornado is way bigger than 20 years ago.

The above picture was rumoured to have a tornado in it. While I did see lightning, nothing of a tornado ever materialised. And before anyone starts to claim that these pictures are “enhanced” only the above picture was altered in Photoshop to make sure I got the most out of my 25 shot panorama. It was used to crop judiciously, not to enhance colour or threat. 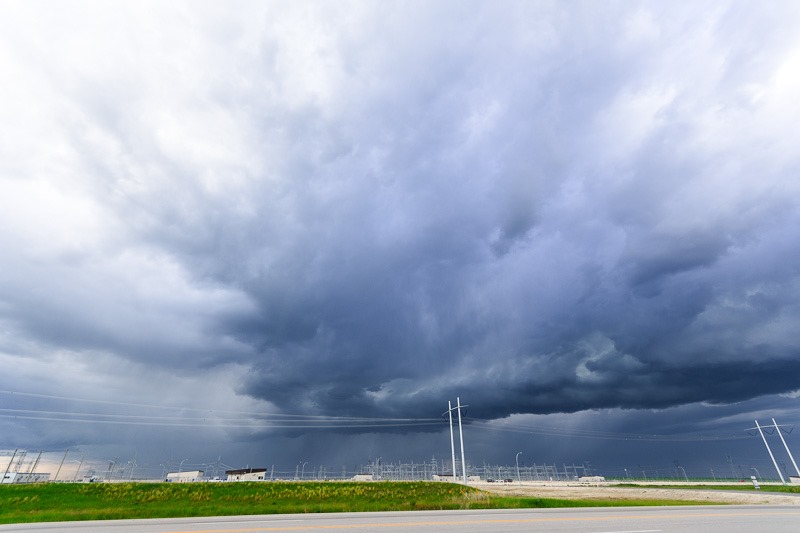 To feel some real threat from the sky, the above picture of a storm coming over Winnipeg and moving east looked the part. Again, not enhanced in Photoshop. This storm too, turned out to be a bit of a wuss, showing nothing but threat and doing nothing. Mind you, I prefer it that way, hurricanes and tornadoes are not what I prefer over my house. 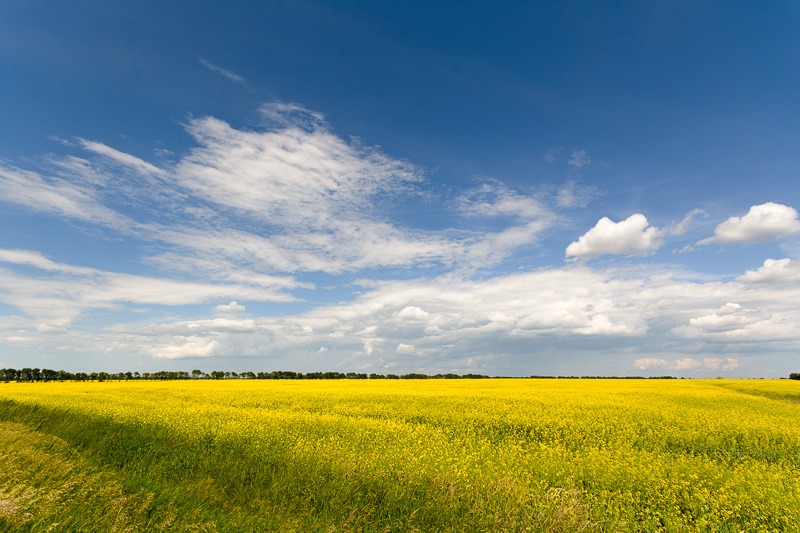 Summer skies are what it’s all about on the prairies. Big Sky Country we could call it. Even more if you can add some Canola to it. Canola in full bloom is bright yellow, in some conditions it is nearly blinding. 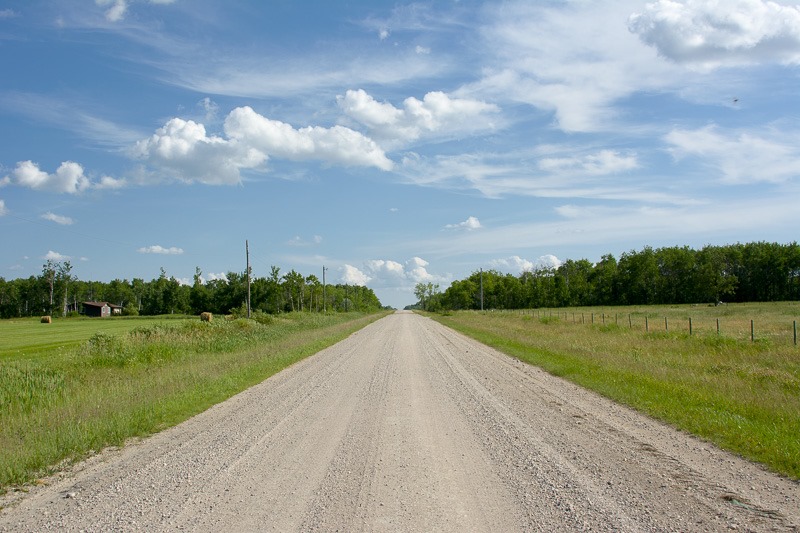 To get to the nice views, often it is necessary to take that specific road, you know, the one less travelled? Well, there are very little of those roads in Manitoba. Even if many roads are unpaved, they are all well travelled. Even on the quietest road you need to be careful not to stand in front of a suddenly appearing truck, tractor or fellow-photographer’s-car. Photographers nowadays are everywhere. They should invent a spray for them, I think 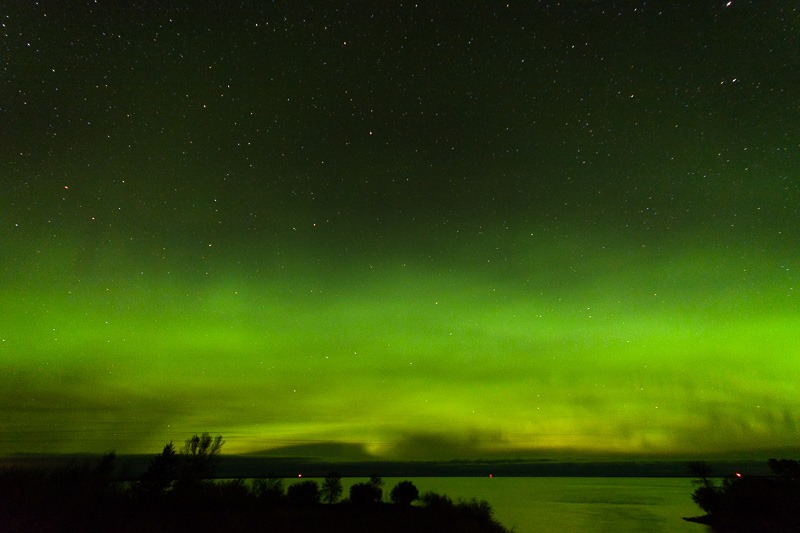 Better to go out at night, many photographers are sound asleep then, leaving me the chance to get some nice coloured skies. The bright green hues of the Aurora never cease to amaze me. I never get tired of them and spending a night under skies like this is really not a problem. It’s a real pleasure. But sometimes (I should not say “often” as not to attract bad luck) the skies are cloudy and you only get a chance to shoot the clouds. 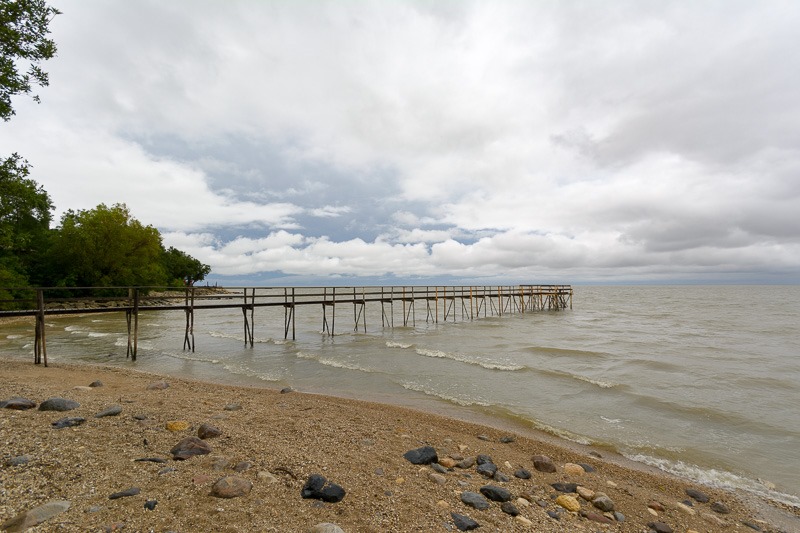 Shooting clouds is better done in daytime too. This pier in Dunnotar, Manitoba is deconstructed every Fall and reassembled every spring after the ice has gone. In summer it’s a good foreground for some wild sky pictures.

Manitoba Skies can get pretty wild and funky coloured. If you like them, go out and shoot or enjoy them for yourself. If you don’t live in Manitoba, come and visit, you won’t regret it.