Lake Winnipeg. A lake half the size of the country of The Netherlands. Or roughly 80% of Belgium. It is big enough to have a semblance of tides. Small enough to be called a lake. Dubbed an “Inland Ocean”. Many people may ask themselves if a water surface this vast will freeze in the “horrible” Canadian Winter. 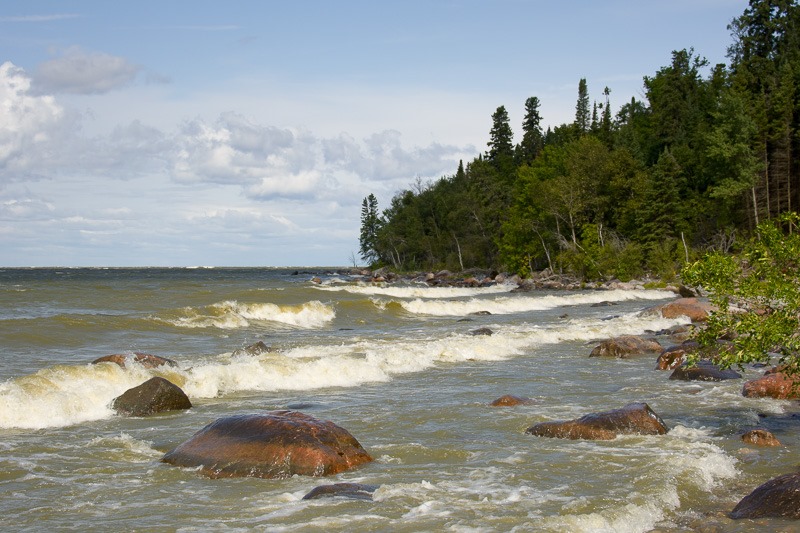 Yep, it absolutely freezes over. With ice thick enough to hold cars and trucks without a problem. In summer it is a very attractive place to spend a lazy summer afternoon, in and around the water. So let’s go and have a look at Lake Winnipeg around the year.

If we start in Summer, with the lead picture of this post, it is nice and warm, warm enough to go and have a good swim, dive or fishing trip on or close to the water. Sometimes, the wind picks up and whips the waves on the rock strewn shores. 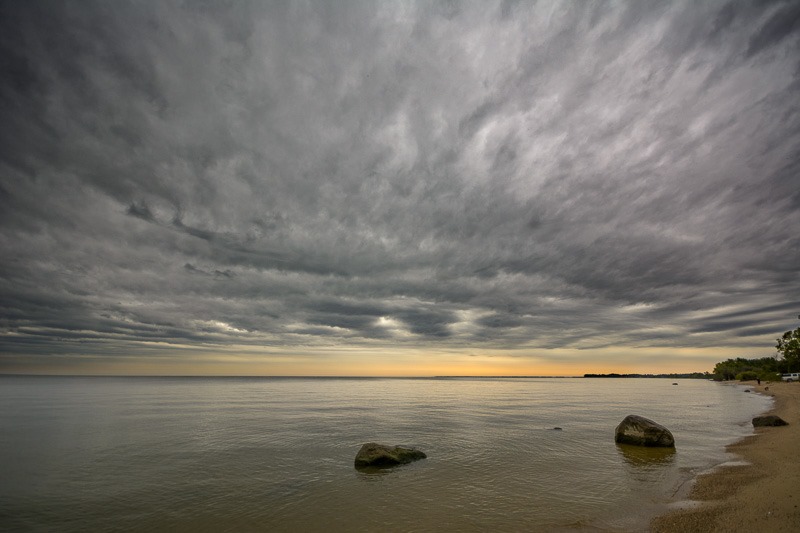 Soon after the summer, the water starts to cool off under the cold temperatures of the arctic winds. The fish start to be more nervous and active, getting ready for a winter with covered water and little oxygen to survive. Fishing is good, as they start to feed more aggressively on anything, including bait. 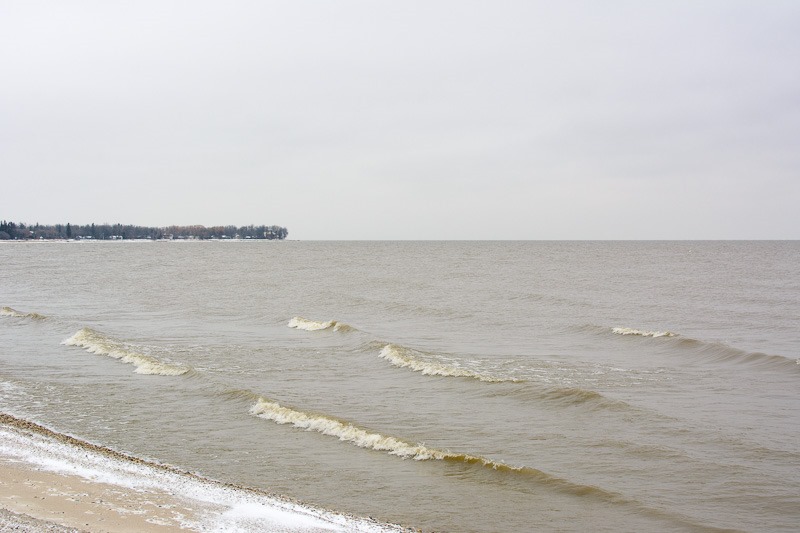 Then the cold starts to settle in. Small patches of ice will form along the shoreline and slowly but surely will grow bigger and thicker. The water by now is too cold for any self-respecting tourist to swim in. Some foolhardy surfers may still try, but they will soon end their efforts as well. 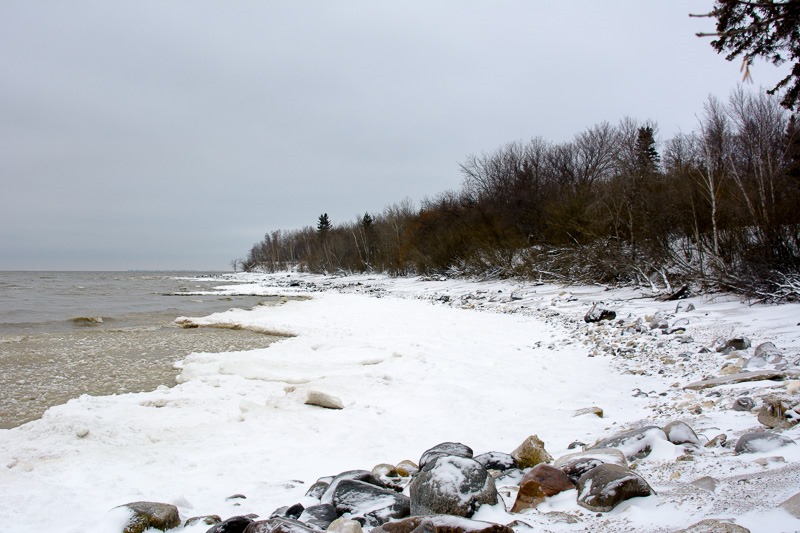 The ice will gain more and more “terrain” on the lake as temperatures drop further. By the end of November, as in the picture above, no person in his right mind would want to go and surf or swim in the water anymore. The fishermen will have the lake to themselves for as long as there is enough open water. Birds and other animals will have left the region for either warmer climates or, like the bears, will have gone into hibernation. 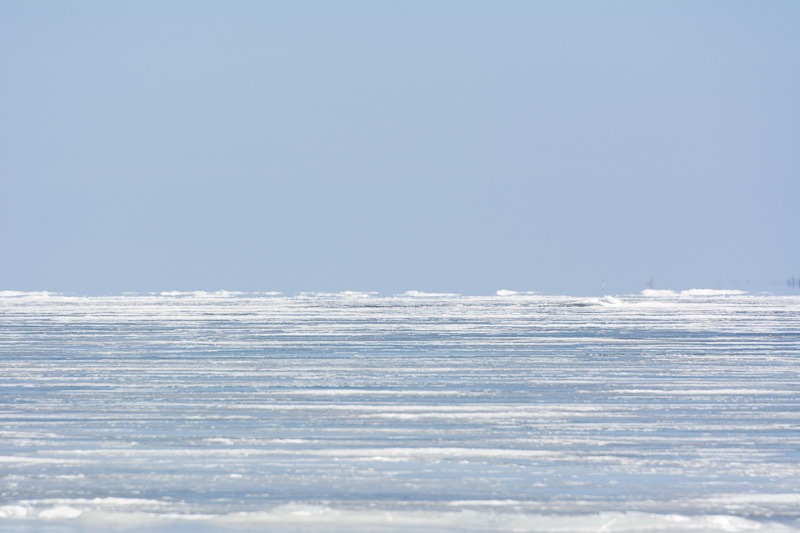 Ice from horizon to horizon

Then winter will descend on the lake, finishing the icy surface to a thickness of 3-5 feet. Thick enough to drive 30 tonne trucks over it without a problem. The lake then looks like the polar vastness, cold and unforgiving. The winds, that give Lake Winnipeg its nickname of “Big Windy” will make that most unprepared people will remain on the shores, either in a warm vehicle or in a hotel/restaurant nearby. Only ice fishermen in shacks and tents that shelter them from the icy winds will inhabit the lake surface. 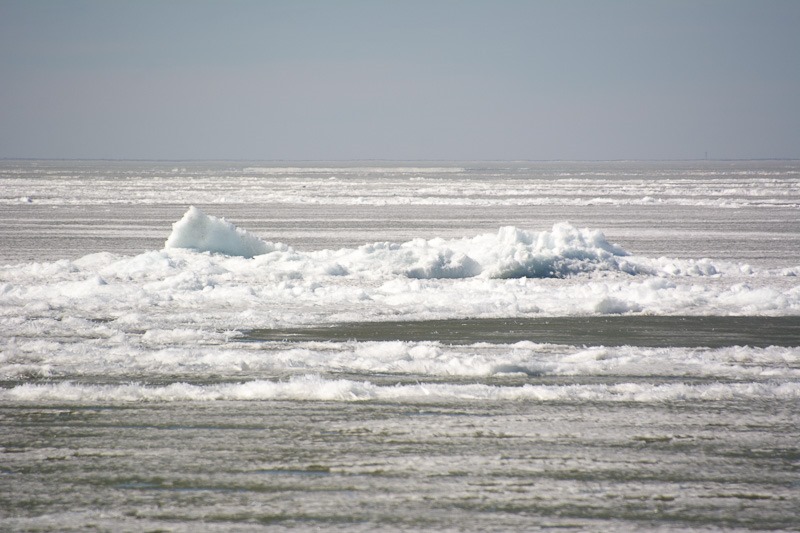 Then comes springtime. It only deserves the name springtime because of the time of the year, not for the warm temperatures. The temperatures are anything but warm, but warm enough to make the ice become dangerous and thin. Breakups and patches with open water start to show themselves. By now, the lake is off-limits for everyone, for obvious safety concerns. 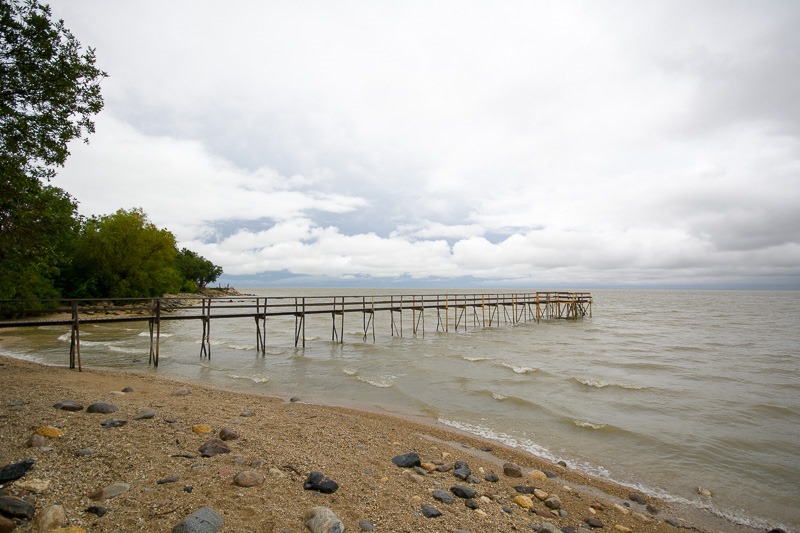 Piers are rebuilt every year

Soon after the ice is gone, the piers will be built again, like they have been set up over many years in every spring. They reach into the lake with the hope of serving anglers and swimmers alike for the summer to come. 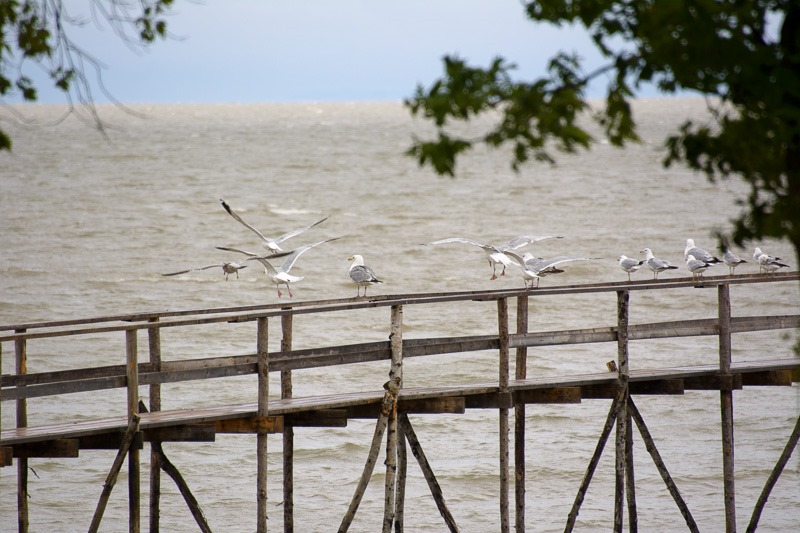 The first to enjoy the piers are the birds. Now coming back from the south, hoping to breed in the cooler climate of the province and hoping for plenty of fresh fish from the lake. There is plenty of fish in the lake, and steps are being taken to keep it that way. Government business, I should say. 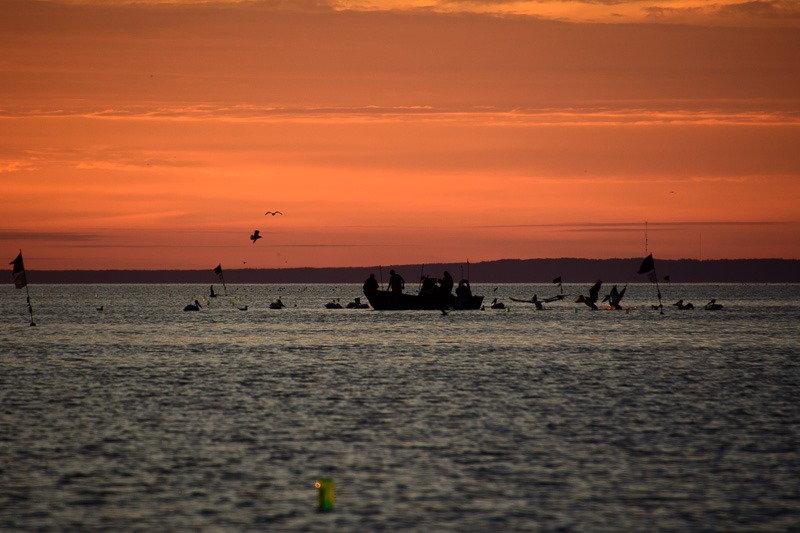 By now, the commercial fishermen are back on the water, emptying their nets full of fish into their boats. They will feed the people and the tourists. Pickerel or Walleye will be the favourite of the season. The rest of what gets caught in the nets is mostly for for the ever hungry pelicans, gulls and terns. And not to forget the Osprey, trying to breed and feed their newborns.

Now if you read this post imagining it being read by David Attenborough, you will get a pretty good idea what Lake Winnipeg is all about

. It’s a pleasure to be around the lake every day of the year. Something I cannot afford just yet, having a day job that keeps me tied to an office seat most of the week.

But if you get the chance, go out and enjoy the lake, any time of the year is a good time.