It’s this time of the year again, the time when the skies in Manitoba change by the minute. Going from pale blue to outright menacing. 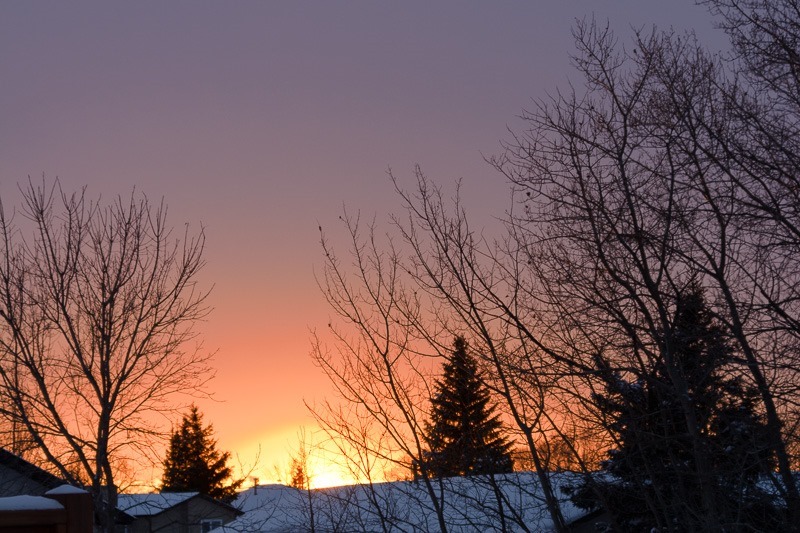 Sky and weather have always been one of my “more serious” interests, trying to find out why a certain weather type occurs. Storms are the obvious choice for this kind of research, but other skies are equally interesting. With the added benefit that I don’t have to have the dents removed from my car once I’m done shooting hail storms…

Today’s skies don’t include thunderstorms, they are nice, but I haven’t had a chance to spot any this year. The first shot of this post was also one of my first shots this year. We’d had a few weeks of pure overcast weather without even a glimpse of the sun. When at last a decent sunset appeared, the shot just had to be taken, even if it were only from the deck of our house. 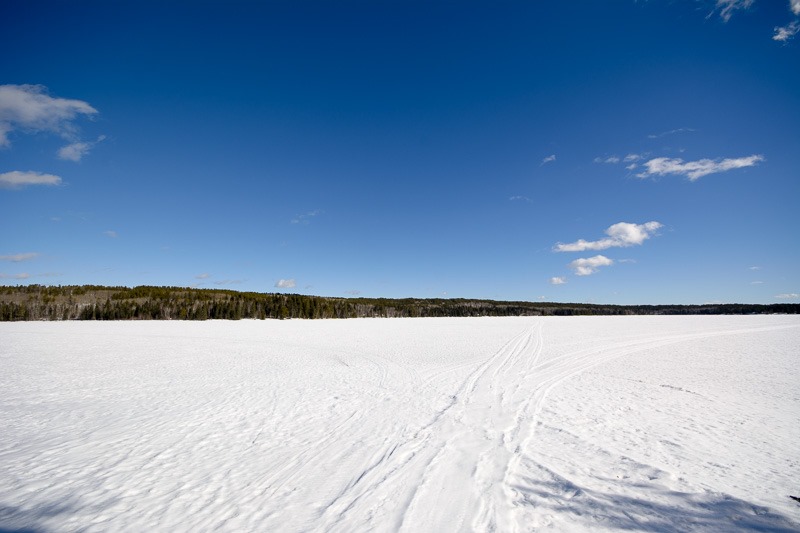 . Of course the landscapes are interesting in Manitoba. The only drawback with them is that if you live here, you get used to them. So I tried to do a complete “reset” in my head about Manitoba and start afresh with new views and pictures. West Hawk Lake is one of the deepest lakes in Canada, formed by the impact of a meteorite. It is over 110m deep, its shape is nearly circular. 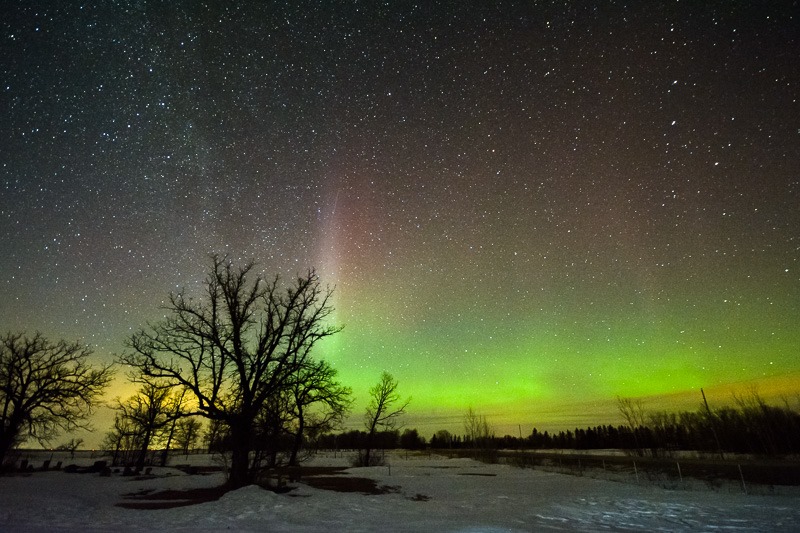 Then come the night skies. Going out in the night by temperatures of –20C and lower is not always something you do for pleasure. But when an aurora is in the making, you will definitely want to go out and shoot it. The above show was quite modest and didn’t last very long. A few “spikes” and the show was over. What we see as a green band near the horizon, however, is a full blown show up north in Thompson or Flin Flon. I’m not yet ready to drive 700km+ up north for the possibility of a light show, though. Not yet. 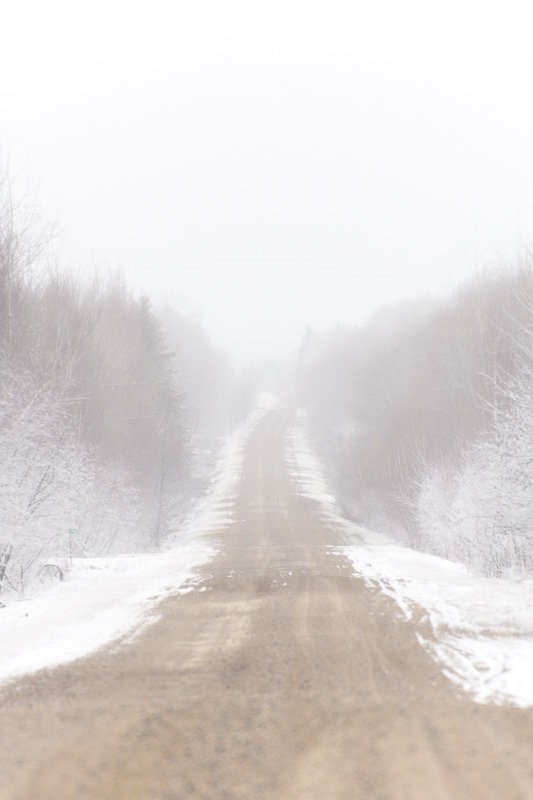 The road to nowhere

Another period of watery skies and grey clouds and then spring seems to arrive. Sometimes the sky even seems to want to eat up the landscape, leaving nothing but whiteness. If some people cannot stand that type of weather, it does make for great pictures if you know what you are doing. The above picture was taken by temps of –10C or thereabouts… 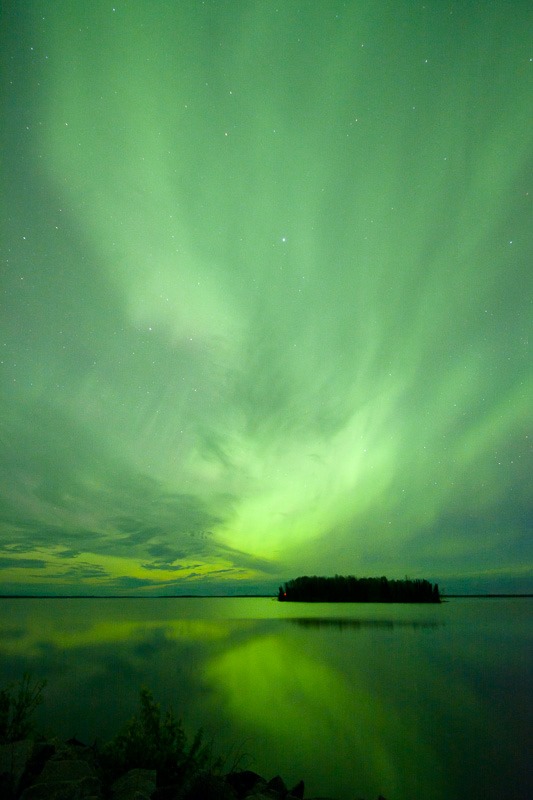 Fantastic Aurora over the Winnipeg River

Then the month of May decides to give us some more grey skies. Nothing to write home about.By the end of May, the Sun gave birth to a big eruption and graced us with a light show I will not soon forget. The light was strong enough to read a newspaper by. It lasted the whole night and above all it was warm enough for shorts and t-shirts. Another added benefit was that the end of May is too soon for mosquitoes. What more can I desire… 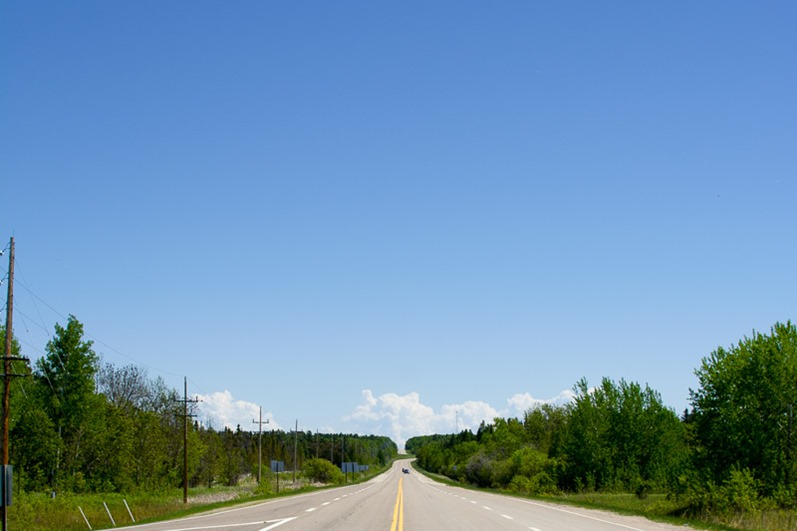 Daytime skies by then turned to bright pale blue. Temperatures were rising steadily and all trees and other greenery started to don the summer colours. Green and blue, and far away clouds. 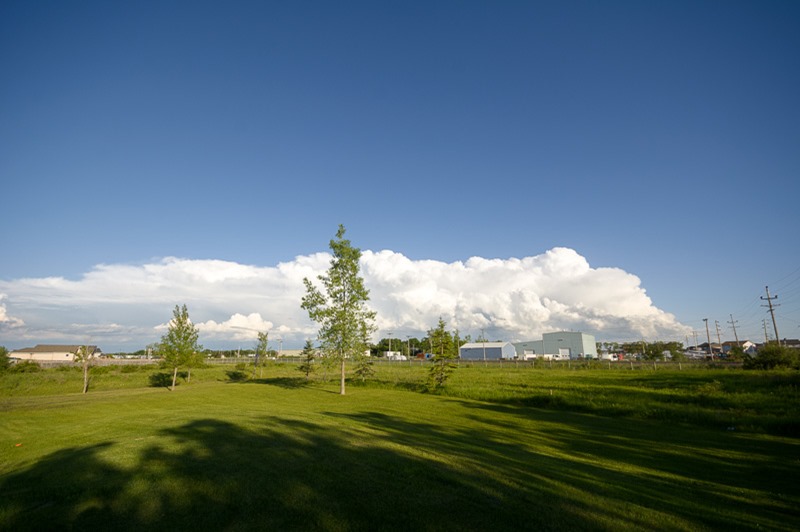 Tail end of a storm

Clouds that soon enough came closer to home and decided to serve us some more menacing conditions. Above is the tail end of a storm system that was deemed “severe” At this particular moment I didn’t have my car and going chasing this storm was not an option. Tail end it will remain. 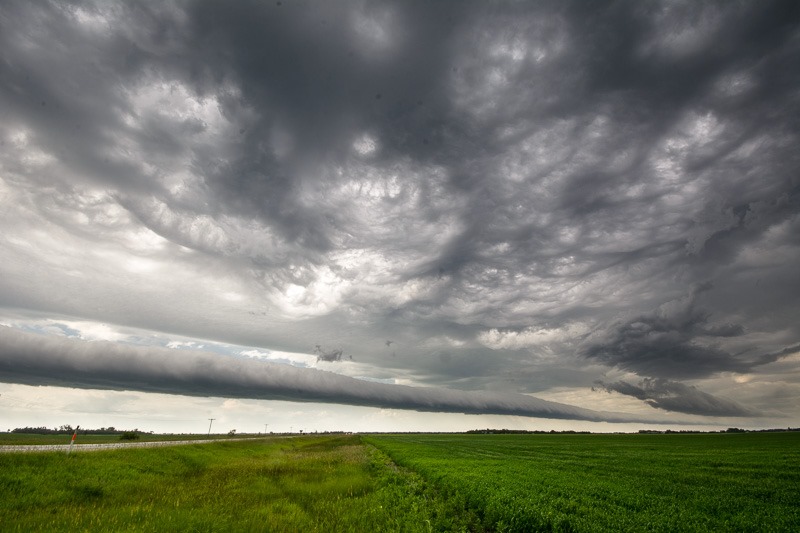 Then, a few days ago, early in the morning, a friend called me to look up again. Since I just came out of my shower I had no idea what was going on. A roll cloud like this was one of my wishes to photograph, I had only seen one before in Paris, a mere 25 years ago. Separating blue sky and storm with a seemingly endless roll of cloud is quite the sight. When I decided to follow it, the chasing thunderstorm quickly caught up to me as well. I decided to save the camera gear for another time and went home instead, Slightly soaked.

More skies to come, storm season is only beginning this year. Perhaps a lightning trigger will make it possible for me to shoot lightning during daytime one of these days.