We have all heard about them. We all know where they come from. But I can attest that I have seen one. This one was limping a bit so he was not fast enough to escape my camera. A few weeks ago, the Northern Lights were out in force. Nothing was forecast, no warning emails in my inbox, nothing. Yet, some indicators showed that it might be one heck of a show. 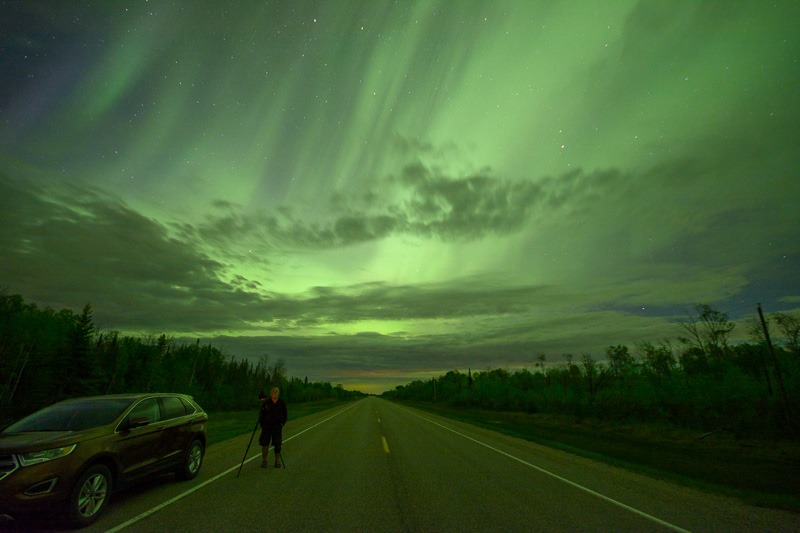 So I called a friend of mine and told him what could be for the night. As usual, he was game for this and we set out to the north. The north-north was packed with one big band of heavy clouds. As usual, was my thought. However, to the east, the clouds seemed to be going from less to nonexistent.

So, East we went. Easy to do if you’re not trapped in the Interlake (between Lake Manitoba on the west and Lake Winnipeg on the east). Crossing Lake Winnipeg by car is not the best idea. So, short things short, we left to the east and ended up near the Winnipeg River. 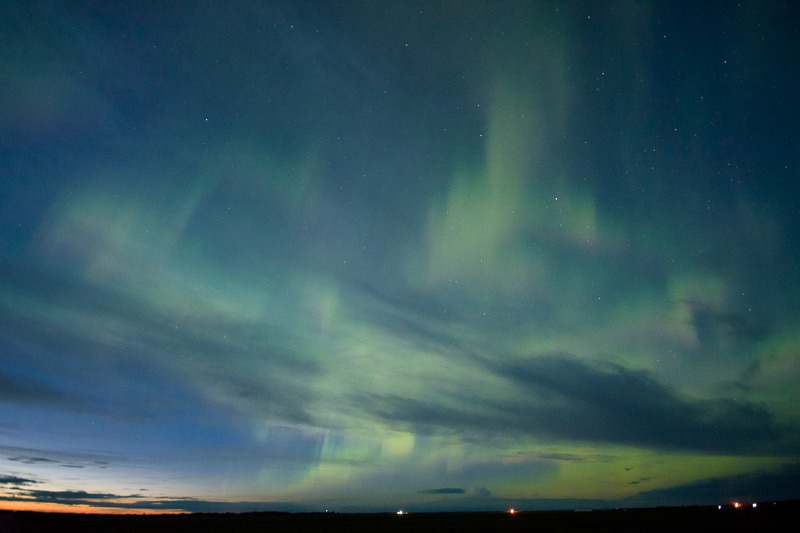 The sun hadn’t lost all its power yet, although it had set about 30 minutes before. I spotted something green in the sky that shouldn’t be there. Remember that for a good viewing of the Aurora, you need dark skies and no light pollution from cities or even lonely yard lights. This time the Aurora was visible even before the light of the sun had died off. That was very unique. A mix of light clouds, crepuscule and Aurora was the result pictured above. 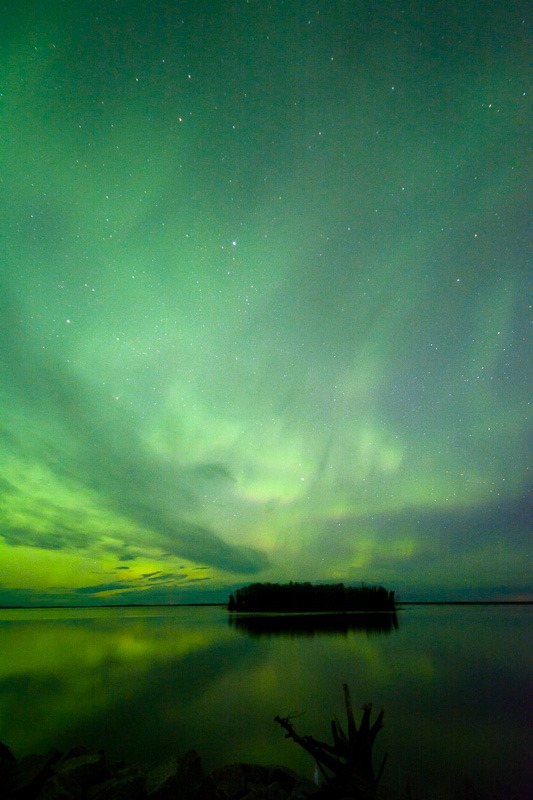 But one can only shoot a sunset/moonset and an empty horizon so many times before it becomes, ehm, boring. Now I can never get enough of this spectacular show of Mother Nature, but a bit of interest in the pictures should be there. Having hundreds of pictures of the exact same subject simply doesn’t do it for me. So we stepped back in the car and went to look for some more rewarding sights. 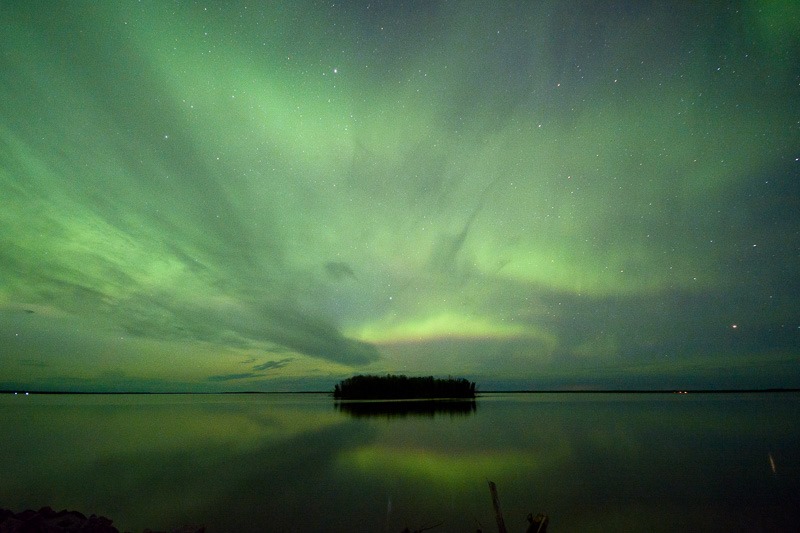 A tiny island called Jack pine Island in the Winnipeg River provided the ideal foreground subject for our shots. The weather was completely calm, the water didn’t have a wrinkle on it so reflections were plentiful. A whisp of cloud came blowing over from behind us, but that didn’t bother us at all. After all a bit of clouds can make for an interesting structure in the sky as well. Even if your first idea and wish is to have completely clear skies. 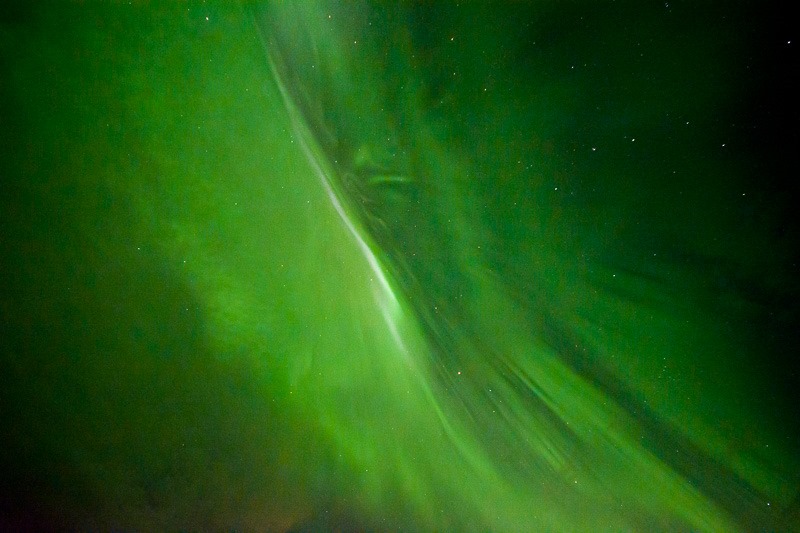 Overhead, the sky seemed to be bombarding us with light particles in a never ending stream. Never before in Europe had I seen the northern lights. That is only from recent years in Canada. I intend to go out as much as I can whenever there is this type of lightshow going on. After a while the interest for the tiny island in the foreground started to wane and we were a bit hungry for some different shots. 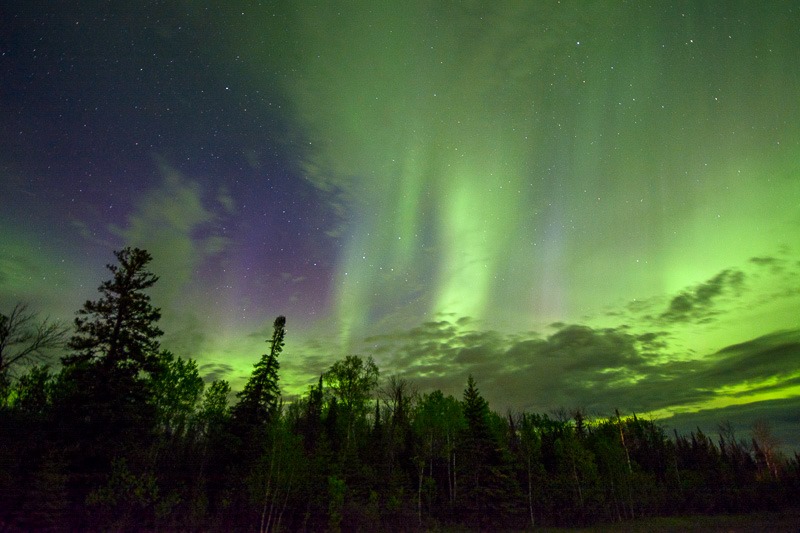 Lots of power left for the night

We left, thinking that most of the show was over by now, heading home. But after a mere twenty minute drive, far from home, my friend yelled at me to stop the car and look up in the sky. The place we had left now was ablaze with green light.

The Aurora was not done yet. 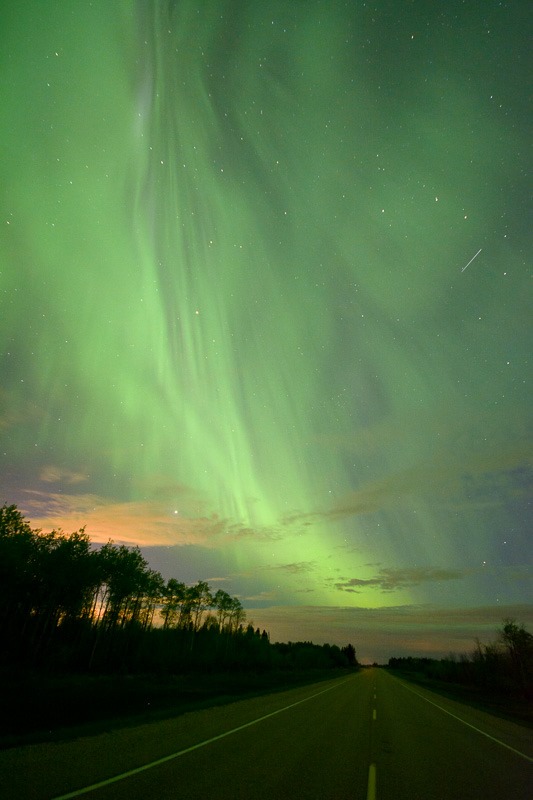 So there we stood, on the side of the road, nobody around. That happens on a country road at 2am… The advantage was that the road was accessible for any kind of shot, without the risk of traffic running us over. Even with the occasional car, the opportunities for shots were endless. 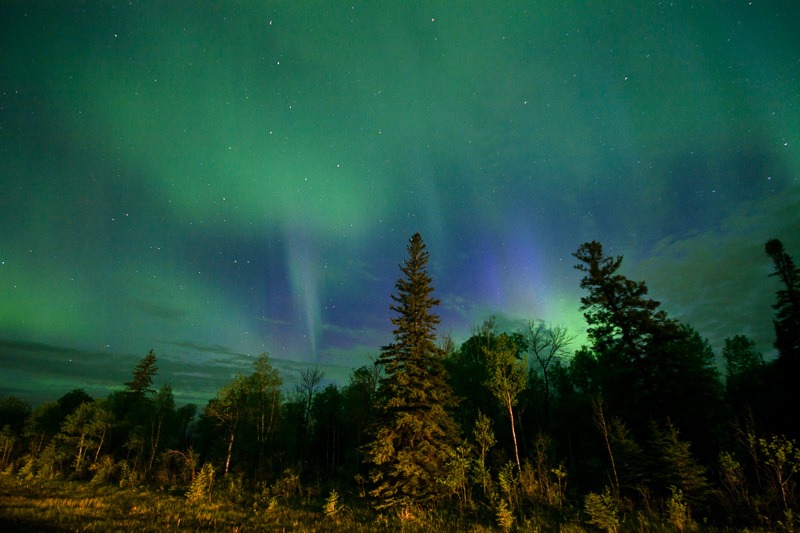 A bit of extra light

With trees partially lit by a passing car, their structure comes out way nicer. A bit of yellowish light on the trees, a blue sky, still not completely dark and the green mist from Lady Aurora. What more can you wish for? Well, for one, I could have wished to have my parents with me, to enjoy this magnificent display. But that is no longer possible. And never will be. I like to believe that in some way they are speaking to me through nature’s effects, be they light, sound, weather or even temperature. 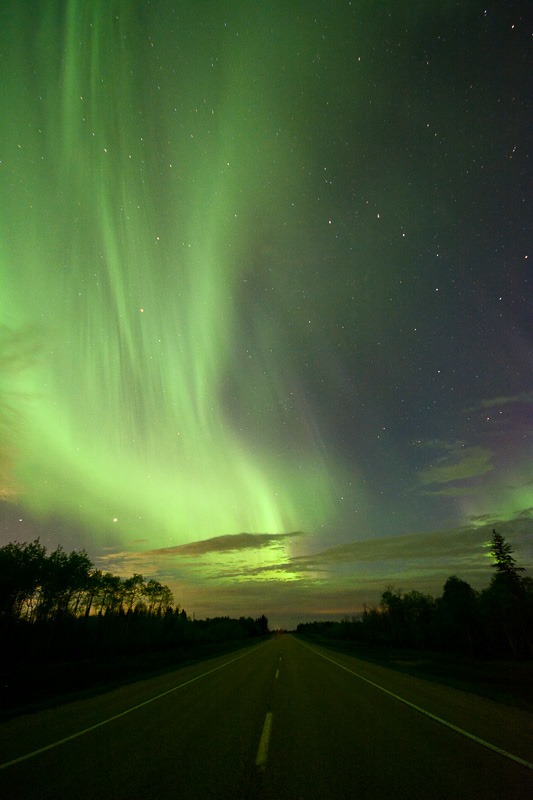 The next best wish was for little green men. The lead picture of the post shows one of them. Little? In real life not so much, but under the display of this magnitude we all feel tiny in the universe.

But even here, after a while it was time to go home, falling asleep at the wheel is not an option I relish, so safety first and we headed home.

Many photographers lasted longer outside, taking in more of this stunning display by Mother Nature. As it turned out, these lights were even visible in Northern Arizona, in the United States…

The best part? It was warm enough to be in t-shirt and shorts, without mosquitoes, but let’s not talk about those…