One of the difficulties with photographing wildlife lies in the fact that wildlife doesn’t like us, humans. We can’t blame them, in all parts of the world wildlife is being persecuted, shot and / or eaten. Often enough just killed as a nuisance or for “sport”. We would become more paranoid too, if humans were the subject of being killed on a systematic basis.But since (for now) we are at the top of the food chain, all the other animals will try to avoid us at all cost. 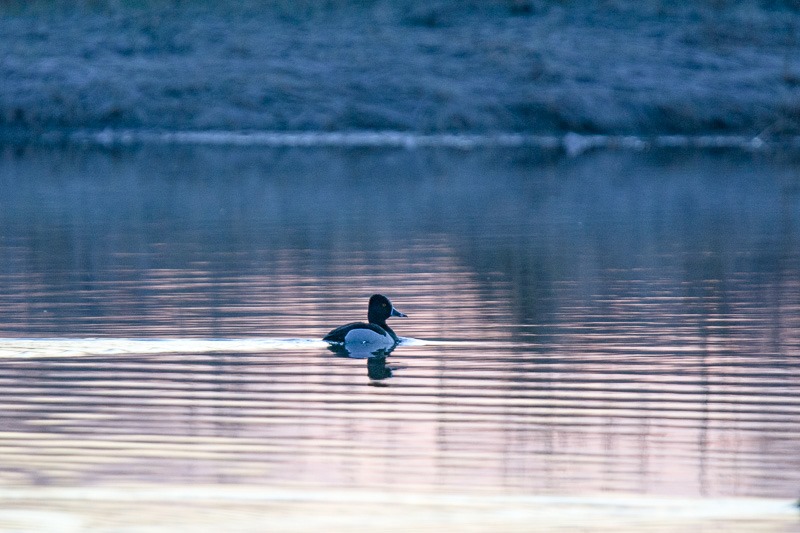 Parking my car about a hundred meters away from a group of ducks, made them quietly swim away in the opposite direction. By the time I was out of the car and ready to photograph them, they were making me wish for a telescope instead of a powerful zoom lens.

Sounds funny, right? Not really if you are trying to get that nice shot, full of details and depicting that bird or mammal with skill. Running after them instead while getting blurry pictures is no fun for me. This time I went back in the car and tried my luck elsewhere. Not all birds are as skittish as the Duck family. So I was thinking that there had to be a better way to approach the birds without scaring them away too quickly. 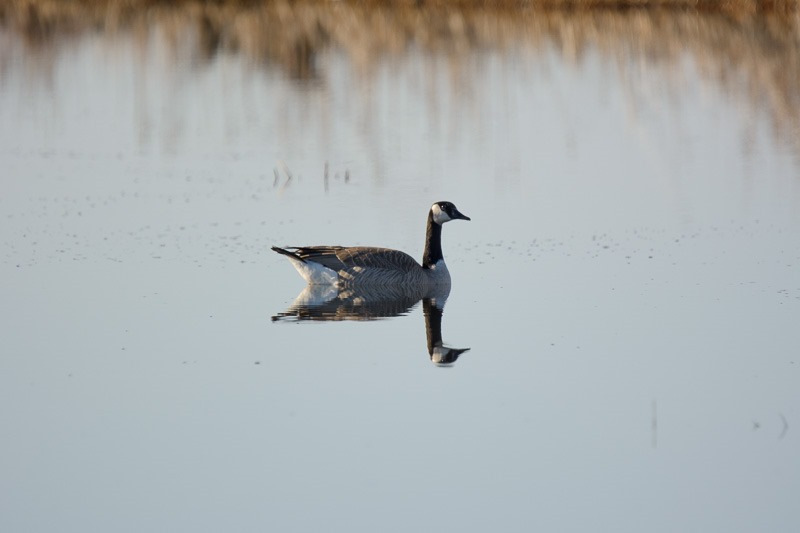 The answer came in the form of a camouflage net and a few other bits and pieces. With a friend we set up near a pond at Grand Beach. Nothing secret, just a pond at the side of the road and a trail. All this long before sunrise, that needs to be said. Once the birds are awake, it is too late to go undercover. Once we were set up, it was time for a coffee and some waiting time. No use taking the good old MP3 player out, anything out of the ordinary will chase the birds away. 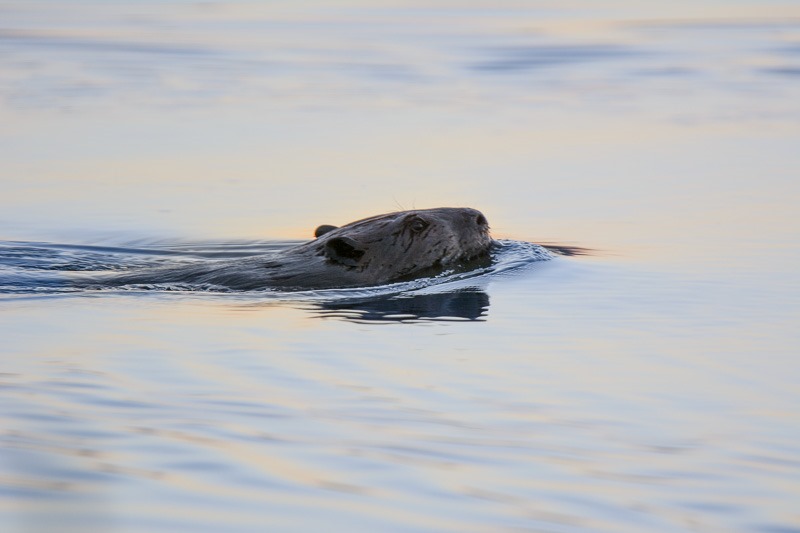 Beaver checking us out

The first one to check us out (or that’s what he must have in mind) was a beaver. Their eyesight is very poor, but their sense of smell is excellent. I guess that the coffee smell had something mysterious enough to be checked out. We didn’t get a tail-slap in the water, so everything must have checked out fine with this guy. A heron flying off a few seconds later made him disappear faster than snow in the Sahara. 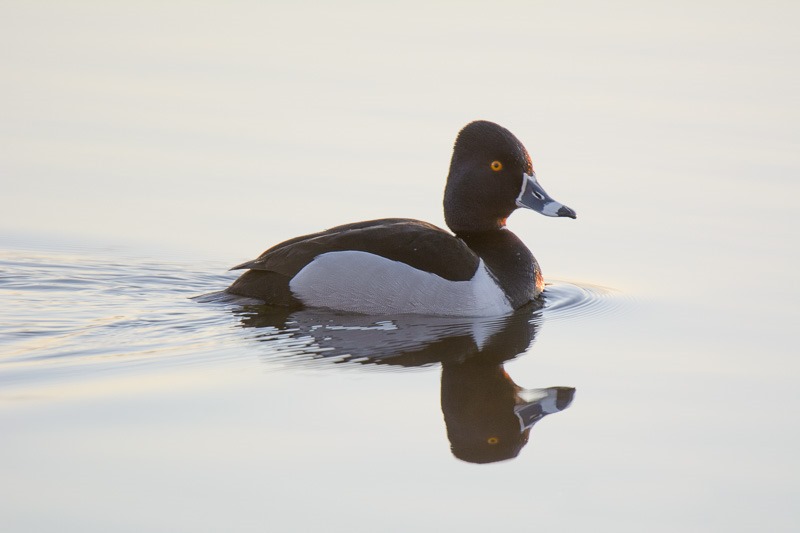 Then it was the turn of a few parading Ring-Necked Ducks, as their name implies, part of the Duck family. They didn’t notice us at all, but I am sure they heard the clicking of the shutters pretty well. However, since they could see nothing out of the ordinary, they didn’t swim or fly away. 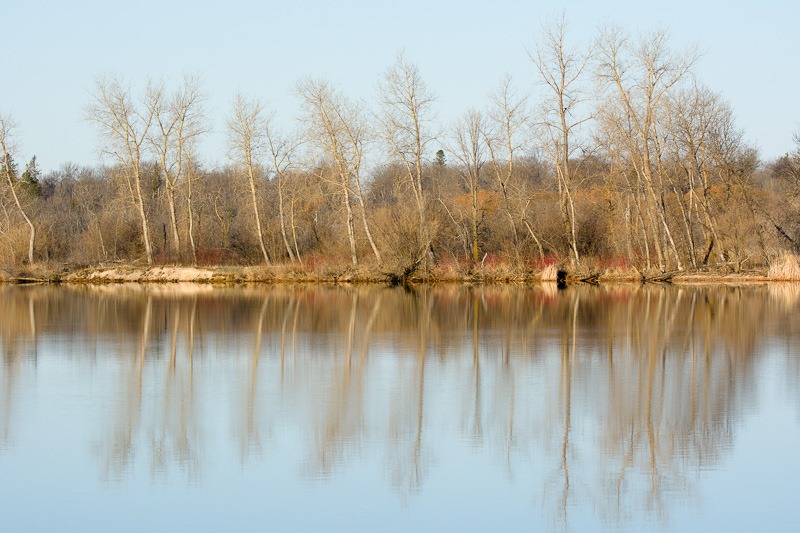 After a while, all the birds had decided to favour a different pond, so we decided to break up and join them from a distance. Sunrise had been underway for a while now, frost had left and I started to warm up more than comfortably. After a quick change of clothes everything was back to perfect. 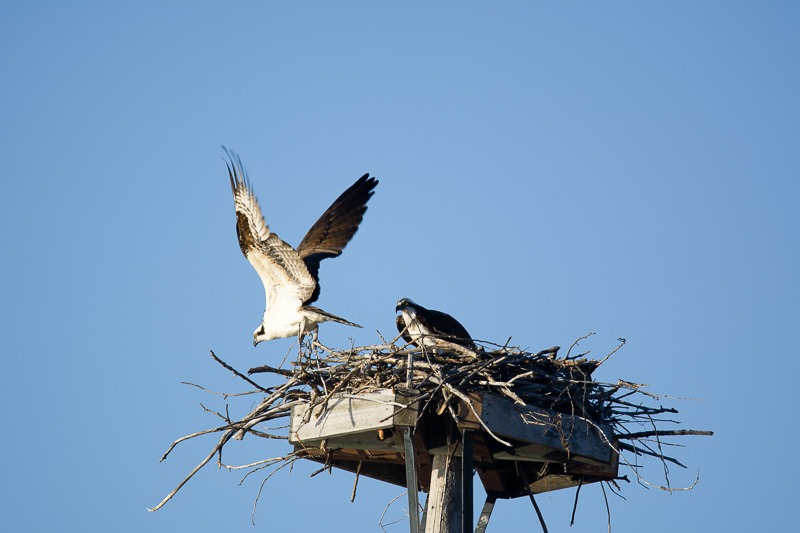 Osprey getting some more nesting material

An Osprey nest, set up by the management of Grand Beach Park no doubt showed signs of feverish activity. Nest building and mating were on the menu for the morning. Like an old couple, they mated, sat far apart afterwards in different trees, then the male started to add some more nesting material. Once that was accomplished, another round of mating. That went on for quite some time. 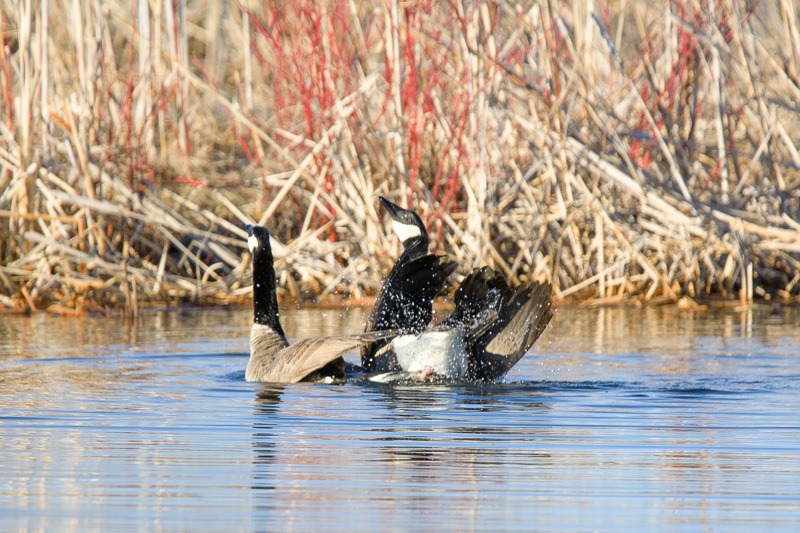 Then we saw a couple of Canada Geese washing or bathing in perfect sync. Having never observed the mating ritual of the geese, this was a first for me. The bathing went on for about ten minutes before it was action time. After that, both male and female were pretty aggressive with all the other geese and a quiet morning was nowhere to be seen or heard. 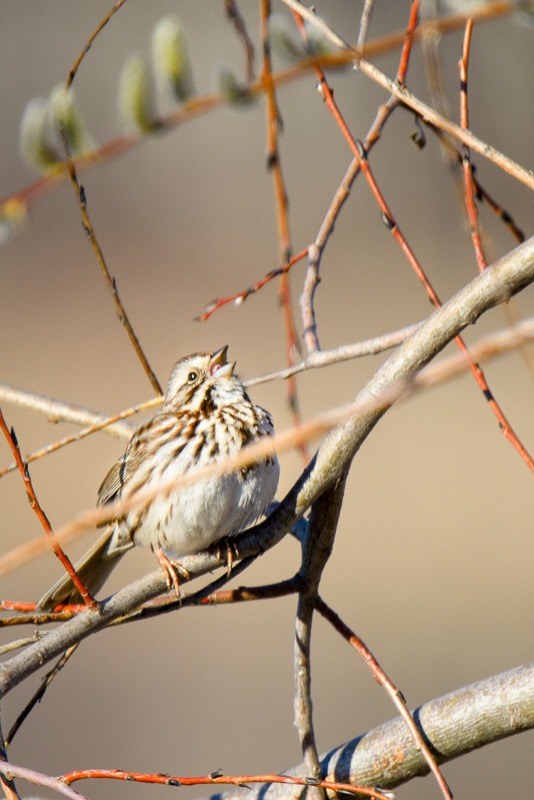 Close by, a small bird landed in a tree. Now that should be nothing special, but this was a Song Sparrow. While I have always been used to the senseless chirping and fighting of House Sparrows, I had never hear the song of a different sparrow. This one has a very nice song and thus is called a Song Sparrow. Makes sense. 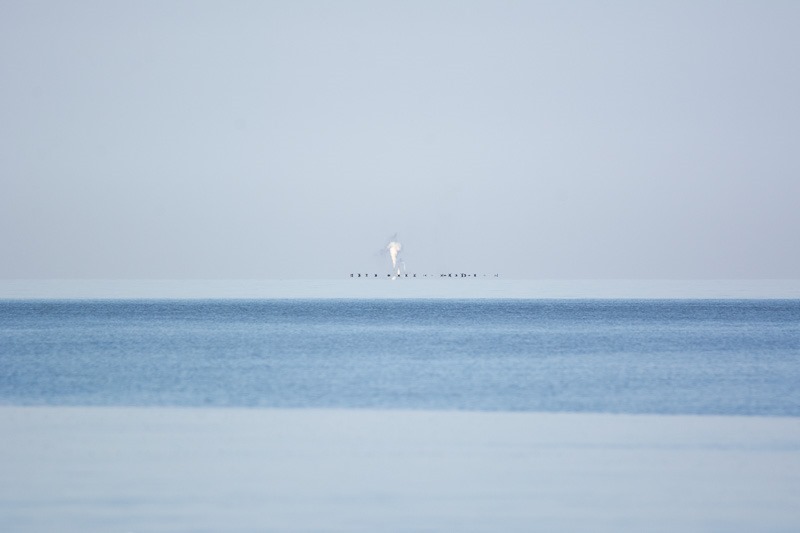 After that, it was time to pack up and dry our feet, standing on marshy ground is fine for a while, but after some time the shoes get cold and sometimes wet. Time to move on and dry up. We went to the beach to see what we could scavenge there, but all we got was what looked like a sailboat. That looked a bit odd to me, knowing that the ice of the lake has not been gone that long yet. Upon further examination, this is a smoke plume going straight up in the windless morning. No doubt that this came from the Whiskey plant on the other side of the lake. A flock of birds coming through in front of it was a nice bonus.

All in all a fruitful morning, even if I had to get up around 3am to enjoy the whole experience. You should try it one day, you might like it.