It is always a pleasure to be out in the “wild” and look at the stars in the sky on a dark night. Sometimes, however, you start to think that if that temperature could rise above –20C, it would be even more of a pleasure. But then again, who cares if you are having fun under the stars? 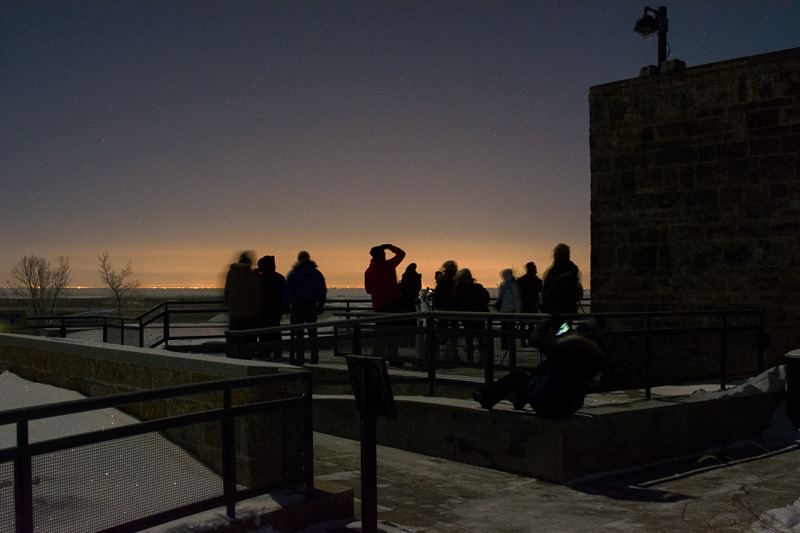 A few weeks ago I went to gaze at the stars on a frosty night with a Meetup group called Snap Happy Winnipeg. Some members brought telescopes so that we could enjoy the moons of Jupiter and the rings of Saturn.

Getting together with a group of people that are all star-oriented is a lot of fun. Taking a good camera to shoot the stars is a must. I did bring my 600mm, but left it in the car. On second thoughts, that may have been a good idea after all. Being with a “Stargazers” group meant that I was supposed to keep track of the stars and try to shoot them. At least in my mind it was like that. After a beautiful presentation inside the Interpretive Centre at Oak Hammock Marsh (just north of Winnipeg), we went outside on the roof. 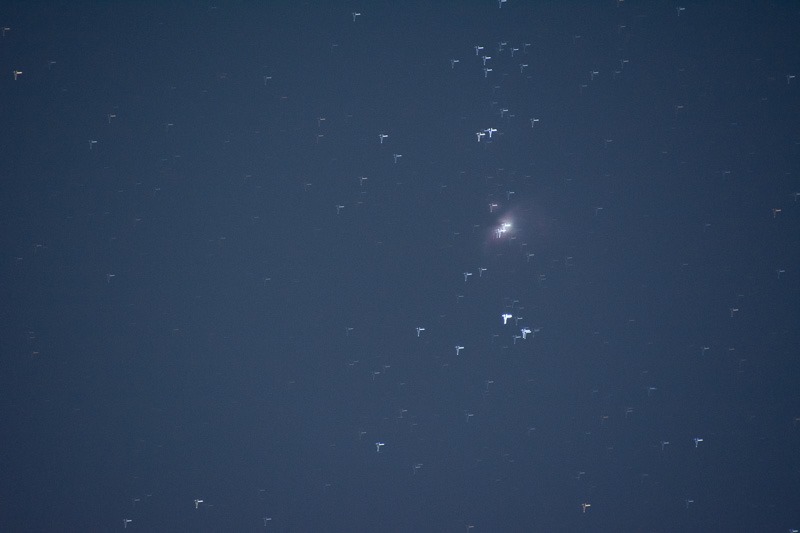 The shaky Dagger of Orion

I thought I could get a nice shot of the “dagger” of the hunter, namely the stars inside Orion. It was cold. Too cold to use my newly bought wired trigger. The cable just went as hard as… a cable. With a result being that the extension so created to the camera made it shake even more. So I decided that the movement of the camera on my tripod was not severe enough if I simply pressed the shutter button. After all, I had been doing that for years already with my wide angle, trying to take the Milky Way and other celestial phenomena. As you can see in the above picture… that was a mistake. If the movement is too small at 10mm for a wide view, at 300mm this same movement creates serious problems. Lesson learned. 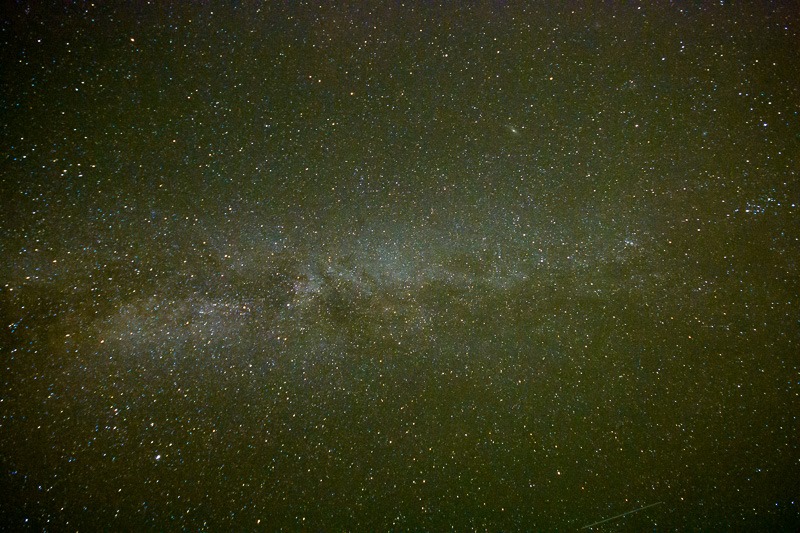 Part of the Real Milky Way

So I decided to shoot wide and people instead. A wide view of the Milky Way always interests me. We don’t nearly see enough of this in the cities. Some people have never even seen the Milky Way and believe that the chocolate bar is the only representation of it. This picture, was taken during an outing in the Summer, last year. 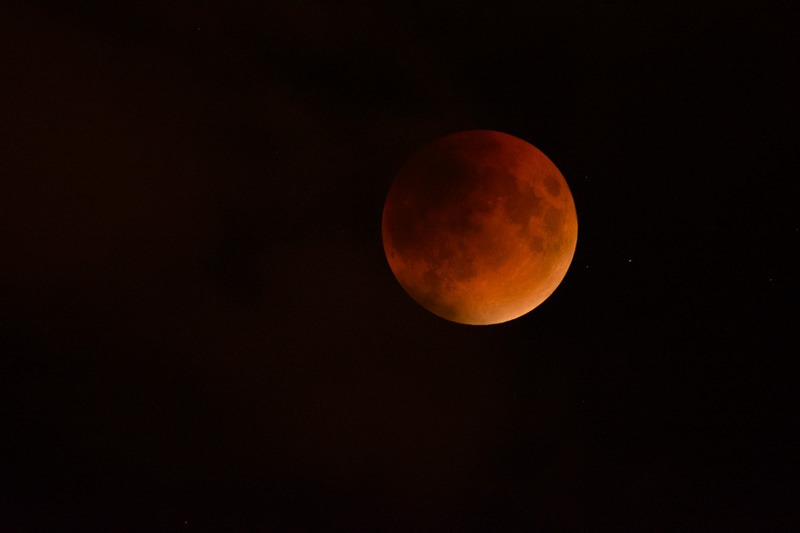 Shooting the moon would have been easy. Except that it was the full moon, bright as can be and all details washed out. Easy to shoot, but no presentable interest. I decided to serve you the September 2015 Fully Eclipsed Moon instead. At least there is something of interest. This one also barely escaped the movement of the camera. This time not because of camera movement, but with my 600mm pointed at the moon, the longest I could shoot without getting trails was 1 second. High ISO was required. When I tried to get 2 seconds with a small series of pictures, on the back of the camera they looked great. On my computer the whole series went to the Trash Bin. 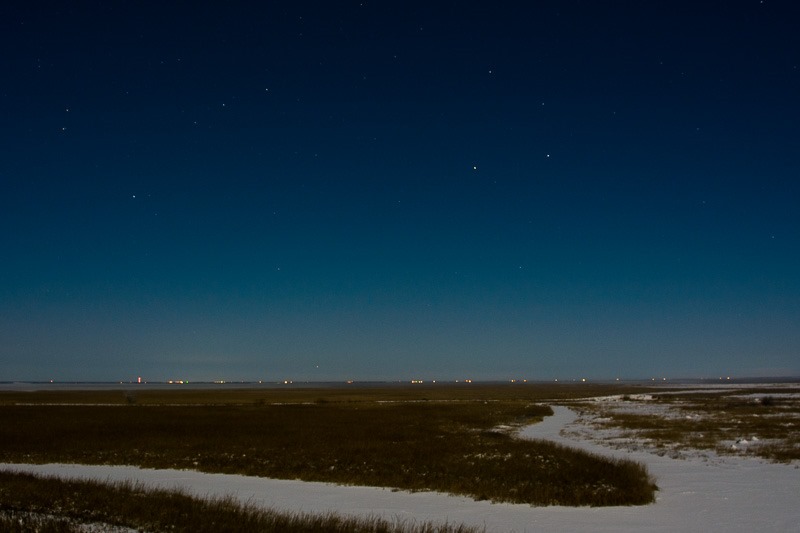 So what is left if the stars are too faint, the moon too bright and the remote shutter release a problem? Shoot the people and the environment instead! You can have an idea of how bright the moon was with the above shot, looking north over the expanse of Oak Hammock Marsh. A few stars were visible, but definitely not the mass of stars you would expect on and “Astronomy Night” 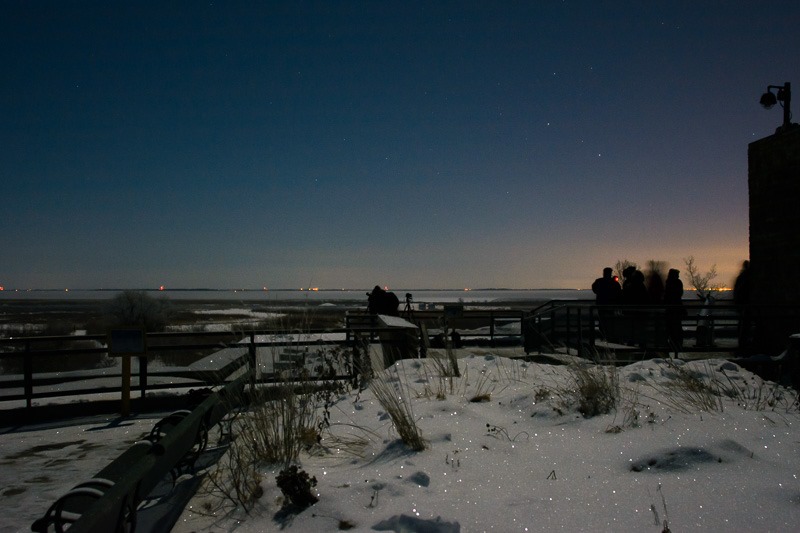 Diamonds in the snow

Looking south from the same spot showed nice glittering spots on the snow. As you can see, this place is the highest spot for miles around, everything is flat around it. After a while it started to get a bit cold, it was something like –24C at that time, so I moved around a bit. 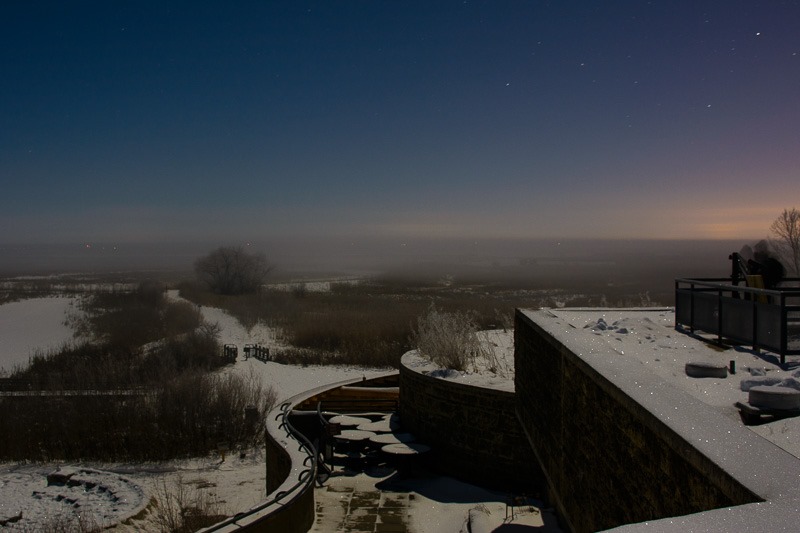 Memories of a fortress

Closer to the edge, my European roots presented me with a flashback of a medieval castle I had seen there. The above picture is for now the closest I have come to a castle in Canada

. Only the buttresses are missing here, but otherwise a pretty good presentation of medieval walls and fortifications. With a bit of imagination, of course… 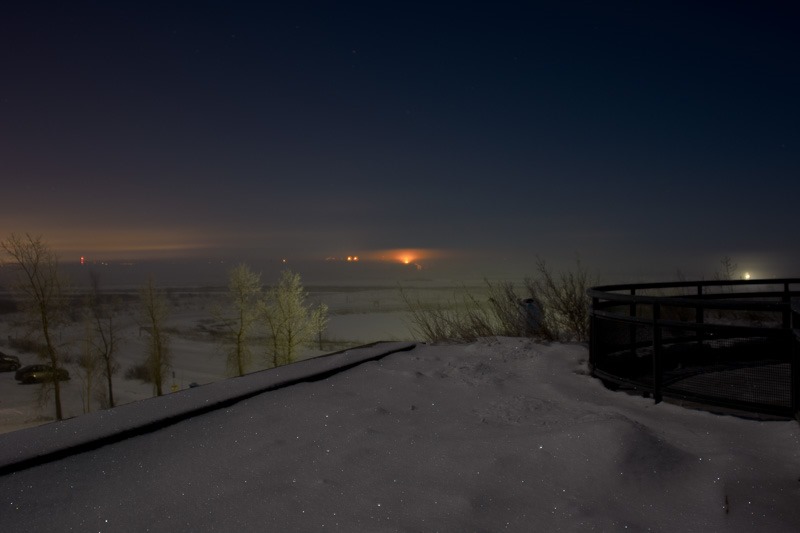 Then, suddenly, the fog rolled in. The temperature first rose, then dropped again. with fog and a strong breeze. Lights that were normally directed to the ground for illumination, now got reflected upward and presented the above illusion. Shortly after that it was nearly possible to see the hoarfrost grow on the trees. It was too cold to stay there but I wanted to do a small time lapse to demonstrate this. It’s a thought for a next time, though.

Even if I didn’t shoot what I had in mind coming to an “Astronomy Night” with professional astronomers, I did manage to see the moons of Jupiter in one of the telescopes, managed to ruin my night vision looking at the surface of the moon through another telescope and came up with some (probably impossible) ideas for a next shoot when it gets cold. Not bad for a single evening, eh?