Every fall in Manitoba, the Canadian Geese gather on the ponds and lakes to wait for the first signs of winter. Sometimes they wait a long time, sometimes they’re gone before you had a chance to say “Goose”. 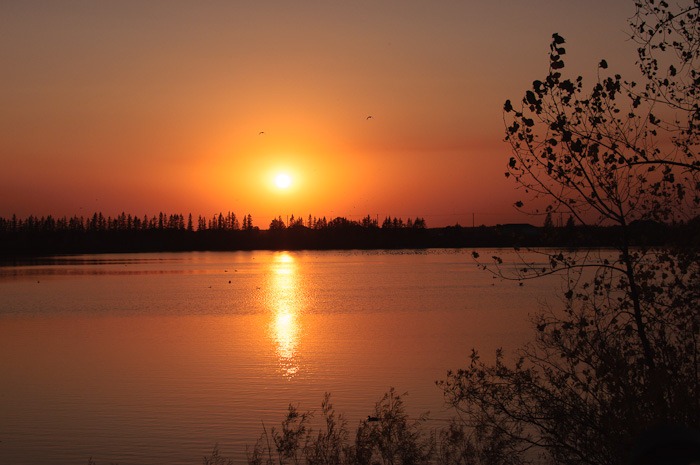 This year I had the chance to see them at Fort Whyte Alive, where the annual goose gathering is a special event.

So before you start saying that every sunset looks like every other sunset, this is about geese and fall, not sunsets

. The lead picture was obviously shot near sunset and I couldn’t resist it. If you look closely, you may find a few geese in there, but nothing much to write home about. 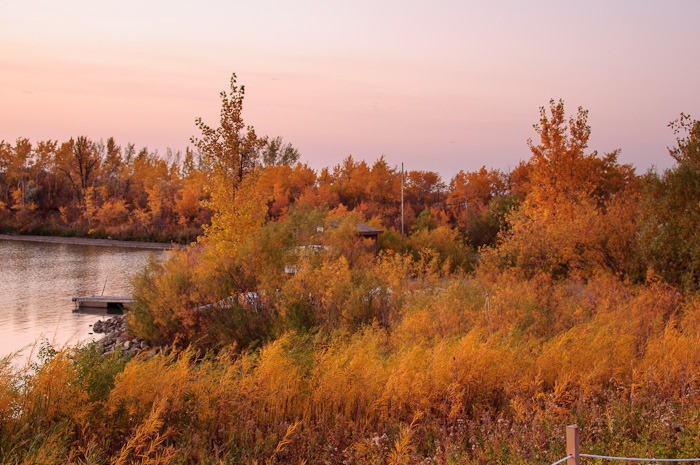 After a while, I set the camera on a tripod, with a very limited mobility. You might say that that is the purpose of a tripod, of course. I usually shoot hand-held, but this type of picture doesn’t lend itself for that. 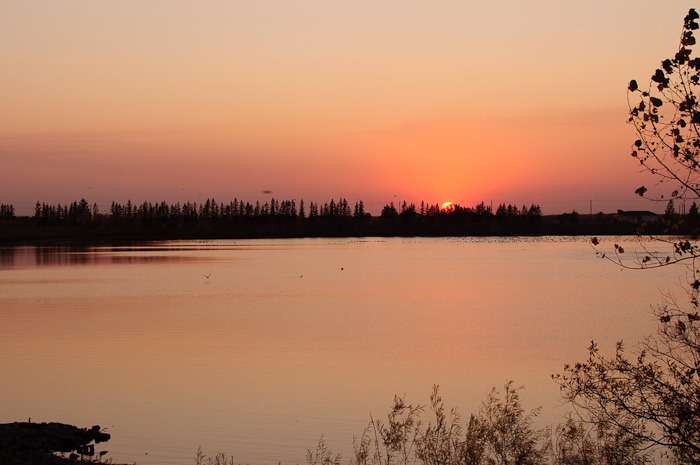 Sunset, the start of the event

So, once the sun has set, something enormous is going to happen. No, it’s not the night arriving, that seems rather usual to me 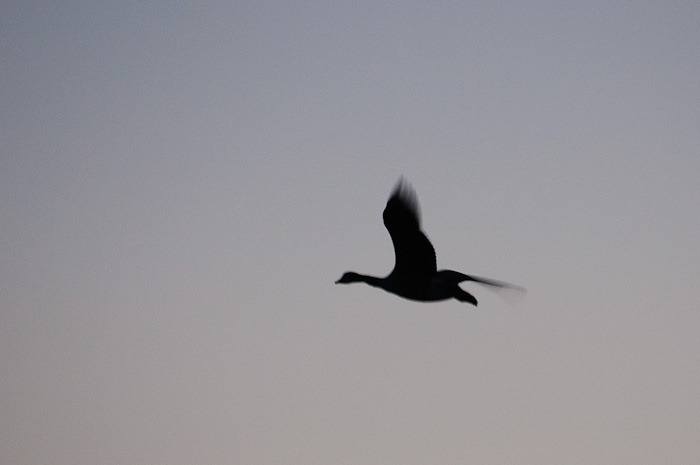 The arrival is starting

First one, then a few and then a lot of geese come flying in to take a rest for the night. I always thought that a few geese wouldn’t be much of a sight, but this was pretty unexpected. At least for me. 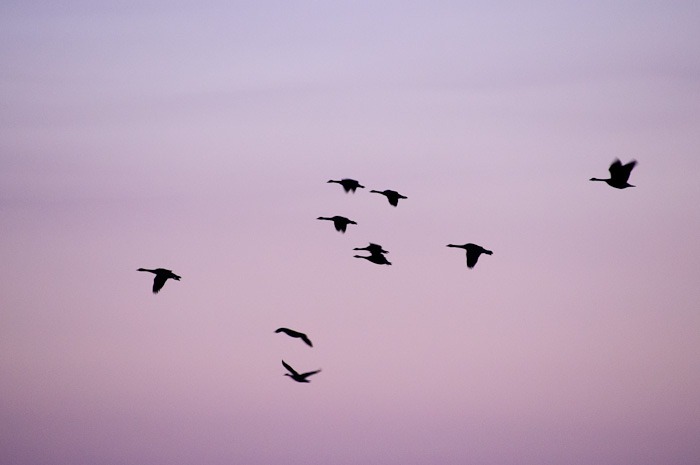 The geese just come pouring in, as if drawn by a magnet. Well, the noise they make will also guide the other geese to the same spot, of course. That quaking is pretty loud. 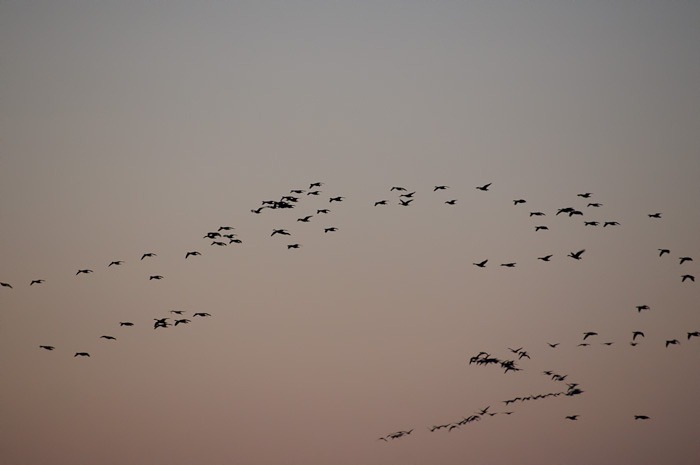 After a while there are tens of thousands of geese on the different lakes at Fort Whyte. Soon it becomes too dark to take any decent picture, even on a tripod. But some modern camera tricks can go a long way to get you still some good shots. Cranking up the ISO to make the sensor more “sensitive” to light is one of them. 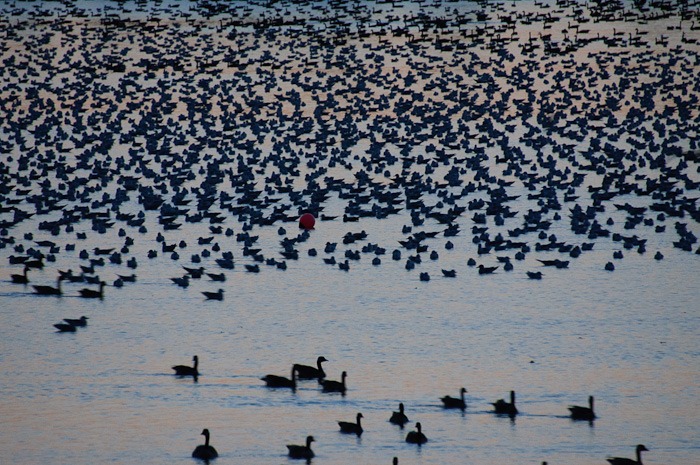 The lake is getting black with geese

And while I was fidgeting with the camera, the geese kept coming in. So many, that the lake was hardly visible at all. By that time it’s also the moment to say goodbye. It gets too dark to take a picture, even with ISOs cranked up and shutter speeds of several seconds.

Nothing helps to photograph moving geese. If they simply kept still, a picture would be possible 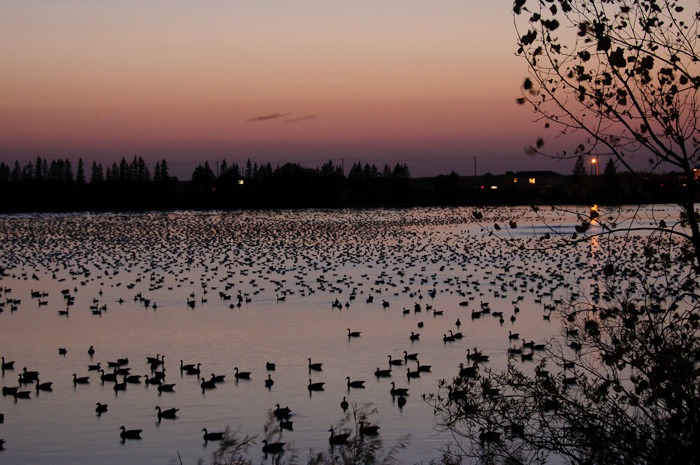 So the last picture I could take was a “wide” picture, gathering as much light as possible without getting only black streaks as geese. This was not the end of the geese coming in, way from it. However, everybody was packing up, so I thought that the time had come to do the same.

A short but pleasant evening in company with other Fotographers from Winnipeg and Manitoba.